Over the years, JRPGs have gone from my most essential genre to an itch I scratch from time to time. I still like them, but as things have progressed, so many have steadfastly refused to break new ground, relying on the same timeworn tropes for both characters and their plots in general. Compounding this issue: the games have gotten longer and more bloated, so if you're a diligent gamer, it's often easy to spend 100 hours or so working your way through one -- an ungodly amount of time to spend with something when you're feeling "been there, done that" almost from the moment you reach the title screen.

The Legend of Heroes: Trails of Cold Steel provided some excellent story-telling, but it didn't exactly do much to change any aspect of that current mindset. The sad thing is that this game, placed in a bubble, really didn't do much to disappoint. It comes down more to Nihon Falcom, the company which created it, and the monstrosity that they've unleashed.

Just look up The Legend of Heroes on Wikipedia. You'll notice a number of sub-series that have been released over a period of over 30 years. I don't know if the two games in the Dragon Slayer series or the three in the Gagharv one have any connection to this game, but Trails of Cold Steel is one of 11 games in the Trails series -- the sixth to be created, to be exact. It begins the third major plot arc tackled by this series and while it does seem to serve as a decent starting point for a newcomer, there were times when I felt compelled to do a bit of online research to bolster my understanding.

This is the first game of a four-game arc and will play out that way for its entirety. Take the first Mass Effect as a comparison. While it's the initial installment of a three-game series, it possesses its own adversaries and plot, with its endgame setting the stage for the next game, while feeling like a pretty awesome climax on its own.

Trails of Cold Steel isn't quite the same. You start out in control of Rean, a young man entering his first year in the prestigious Thors Military Academy in the realm of Erebonia. He, along with a number of fellow classmates, are placed in Class VII -- a new class designed to mesh together students of varying backgrounds, as opposed to the others, which are divided in ways to place students from elite or common families among their ilk. Just ignore minor details like how nearly all the "common" members of Class VII are pretty elite themselves -- including the children of people such as a leader of a prominent anti-noble political faction, the land's foremost arms manufacturer and one of the most respected military generals. 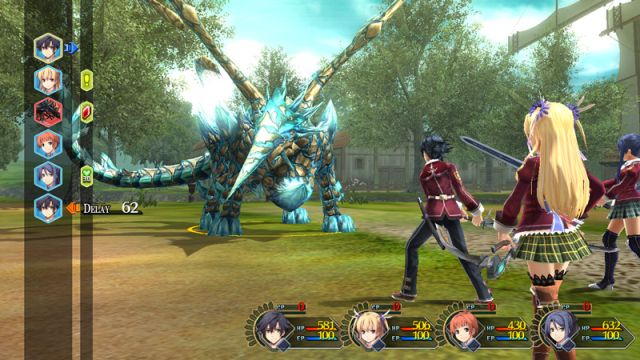 This game is about Rean and company's first year at Thors. Rean regularly does odd jobs to help out other students during the day and then will set out with classmates to explore floors of a massive and mysterious dungeon located under a building on school property. He and his class also will go on field studies, which take them to various locations around the game's world to learn about the different regions and factions, as well as the issues causing various groups to be at odds with each other.

While each field study is a stand-alone exercise, it won't take long to find threads connecting them. Threads that form into a terrorist group seeking to create havoc through the land. Just don't expect me to tell you how things get resolved. Not because I give a damn whether I'm spoiling anything or not, but because this game only ties up one element of its plot: What lies at the bottom of that Old Schoolhouse dungeon. Towards the end, you'll solve that mystery. And then you'll go through tons of dialogue and stuff as Rean and friends conclude the giant year-ending school festival serving as a backdrop to their recent missions. And then chaos erupts, you get thrown into back-to-back-to-back boss fights -- with the final two INTRODUCING a new style of combat I don't recall even being hinted at previously. And to conclude: a cliffhanger ending where Rean is helped off the battlefield, his classmates and school faculty are making a desperate stand and I guess you better pop in Trails of Cold Steel II to find out what happens next.

Or, if you're like me and your emotions progressed from "I'm totally loving this!" to "This is a good game." to "Is this thing ever going to end" over the course of nearly 100 hours, maybe not. This wound up being one of those weird games where I generally liked all of its parts, but wound up getting pretty tired of it as a whole.

I can't put the blame on the battle system, as it was your typical turn-based stuff with a few neat bells and whistles. You can have four characters out on the field together and can link each of them to one of their partners in order to occasionally unleash combo attacks. You can acquire all sorts of spells and skills to give everyone a fair amount of diversity in battle. Properly engaging enemies is crucial. If you can instigate a surprise attack, you'll get multiple turns before the enemy can do anything, often allowing you to finish a fight unscathed. But if you're the one getting attacked from behind, the results can be just as devastating, only with you being the recipient of all that pain. 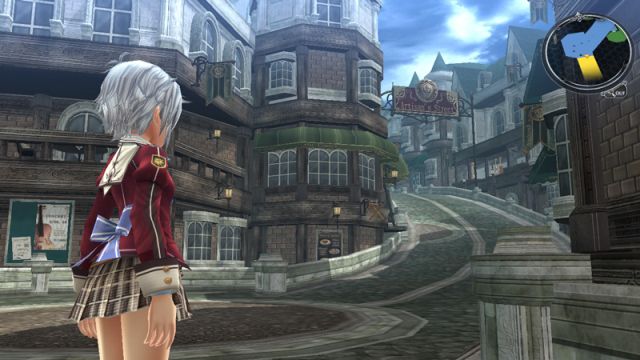 I also admired the game's dedication to world-building. Every town or city you visit is quite different from the rest and Nihon Falcom does a great job of gradually introducing new characters and factions so that you'll finish the game with a smattering of knowledge about a huge amount of things, without ever feeling completely overwhelmed by how everything got dropped on you at once. You have reasons to talk to lots of people at all times, as many of the other students and staff have their own little arcs you won't even notice if you don't take the time to check in on them. And the sense of scale also hits the sweet spot. You really do feel like you're a small group of students in a big world with a lot going on. Where Class VII's actions might be able to alter things to a degree, but those big wheels are going to keep on turning and if Rean and company can't react accordingly, they'll wind up crushed under them.

But it all gradually felt less and less fulfilling. There were some bizarre decisions, such as building up one character as a major adversary only to kill off that person off-screen. Rean's party was talking to a couple other terrorist leaders and they just casually dropped that their colleague perished in a separate mission, leaving me to stare nonplussed at the screen for a bit before shaking my head and carrying on through the dialogue. The game's verbosity could be a drag at times, with me regularly going through sections that let like a mildly-interactive novel. I'd play for an hour or two some nights and maybe get into one or two battles, spending the rest of my time being shuttled from one conversation to the next.

But what bothered me most as time went on was how the only quests in Trails of Cold Steel that don't feel like busywork are the field study ones affiliated with the main plot and, to a lesser degree, those trips to the Old Schoolhouse dungeon. With the rest, I generally felt like the people devising them really need to look into the concept of creative thinking. Some have you travel down a road to fight a big monster, while the rest are various fetch-quests that, at best, have value because you'll be introduced to a new member of the support cast while doing the menial task you've been given. The locations you visit might be quite diverse, but the effect is blunted when you're doing the same basic things in each one.

My biggest complaint about JRPGs in recent years has been how they've gotten more and more bloated; with this being one of the more egregious examples. I got into the plot, enjoyed visiting new locations, had fun with the battle system and should be annoyed that I have to take time away from playing the second game in order to write this glowing recommendation of the first. Instead, I look back at the paragraphs I've typed and see I've also complained the massive amounts of text, the sheer number of dull quests and how the endgame was both annoying and unfulfilling; and realize that if this review serves no other purpose, it at least provides a personal warning if I ever muster the inclination to continue in this series. Trails of Cold Steel is a pretty good game -- I just don't think it fully justifies its hefty run-time.

If you enjoyed this The Legend of Heroes: Trails of Cold Steel review, you're encouraged to discuss it with the author and with other members of the site's community. If you don't already have an HonestGamers account, you can sign up for one in a snap. Thank you for reading!

© 1998-2021 HonestGamers
None of the material contained within this site may be reproduced in any conceivable fashion without permission from the author(s) of said material. This site is not sponsored or endorsed by Nintendo, Sega, Sony, Microsoft, or any other such party. The Legend of Heroes: Trails of Cold Steel is a registered trademark of its copyright holder. This site makes no claim to The Legend of Heroes: Trails of Cold Steel, its characters, screenshots, artwork, music, or any intellectual property contained within. Opinions expressed on this site do not necessarily represent the opinion of site staff or sponsors. Staff and freelance reviews are typically written based on time spent with a retail review copy or review key for the game that is provided by its publisher.