While I'd be a filthy liar if I started talking about how The Last Tinker: City of Colors was some sort of essential game that demands you drop whatever the hell you're currently playing in order to sample its unparalleled excellence, it does hit enough of the right notes to be a more-than-adequate diversion.

Developed by Mimimi Productions, I found this game on PlayStation Now and it looked like it might be fun. It's an action-adventure platforming game that, according to its Metacritic page, has been compared to Jak and Daxter. While I'm not the right person to verify that claim, I can say that it was a breezy and fun game that was short enough to not wear out its welcome. Despite being something that can be run through in a few hours, it possessed a pretty wide variety of missions, with the only flaw being that a couple of them weren't particularly fun or aren't the sort of activities that give a game lots of replay value.

The Last Tinker reminded me of a technologically-upgraded PlayStation 2 action game, since the camera was just a bit too awkward for it to feel completely modern. I was most impressed with the really vibrant and cartoonish colors on display  which probably shouldn't come as a huge shock, considering "City of Colors" is part of its title.

At the beginning of the game, said city is in a bit of disarray. Divided into multiple sections, each governed by a particular color, it's suffering from an issue where residents of each sector are convinced their color is the best, with those colors influencing their actions in negative ways. Red has turned from courageous to ill-tempered, Green has gone from curious to cowardly and Blue has changed from stalwart to depressive to the point of total lethargy. Your character, Koru, doesn't fit into any of these groups, though. He lives just outside the city and kind of does his own thing along with l'il sidekick critter, Tap.

One of his forays into the city constitutes the game's tutorial. He's coming to enter a race, but has to do a few chores to get you acclimated to some of the game's features, such as being able to attract mushroom-men to follow you around to assist in puzzle-solving. Get that introductory busy-work finished and you'll do the race, only to find that a particularly ill-tempered Red citizen has no issues with cheating to win. Or punching the hell out of Tap for calling him out on his shenanigans. 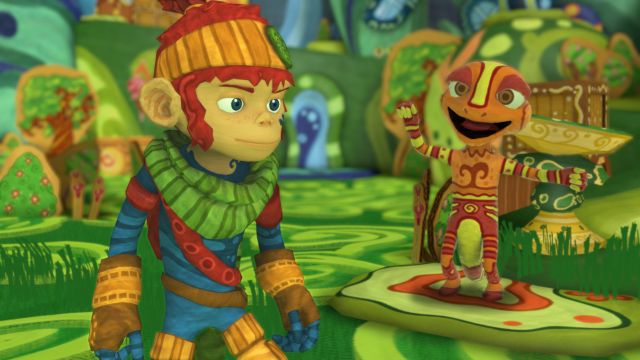 In attempting to care for his injured pal, Koru encounters a strange Purple spirit. Strange because while the Red, Green and Blue sectors of the city all are watched over by spirits of their color, our protagonist has never heard of a Purple counterpart. But the dude is offering to heal his friend in exchange for a favor and he really can use the help, so whatever, just roll with it.

Bad idea. Not just because this leads Koru through a really annoying (but fortunately, brief) stealth level, but also because that Purple spirit has been taken over by a force known as the Bleakness and it has one goal: To paint over all those other colors, leaving nothing but sterile, empty whiteness. Fortunately, while Koru might have played a big role in causing this problem, he also plays the role of "Chosen One" and is the only one that can solve it. All he has to do travel to each sector of the city, bond with their spirits, fight off monsters created by the Bleakness, save trapped citizens and find a way to the Bleak Spirit with the hope of finding a way to foil its plans.

Initially, Koru is helpless against Bleak monsters, but he'll soon meet the Red Spirit and gain the ability to damage them with punches. The other spirits, when met, offer their own attacks. Hitting something with Green power causes them to temporarily get scared and flee  possibly into chasms or headfirst into spiky plants. The Blue power will depress them for a bit, causing them to not move until the effect dissipates. Those skills can all be boosted by spending the game's version of money at dojos scattered throughout town, which also provide other useful things such as additional health.

Overall, this is a pretty simple game, which plays a big role in why I feel its brevity is so important. Your main attack will likely be those Red punches, with Green attacks primarily being useful in situations where there are lots of spiky plants to scare foes into; while most enemies are pretty similar in appearance and not all that different as far as strategy goes. Punch a couple times, move out of their range and repeat until they've died. Occasionally, there will be a shield foe you'll have to destroy before you can damage the regular ones or something might be shielded, necessitating you using a power punch instead of your regular one, but combat is generally simple and repetitive. The primary alternate form of attack is simply throwing a ball of color at enemies that aren't within melee range, so we're not talking about complex skill sets with this one. 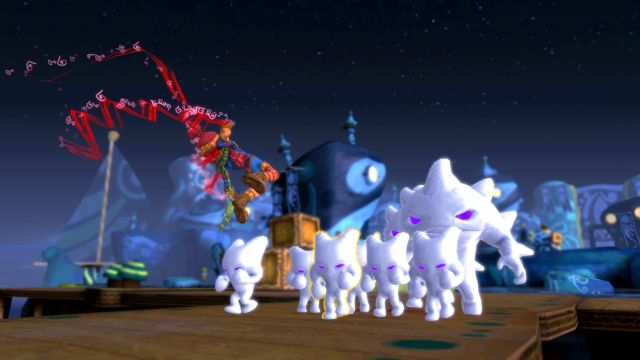 The controls are equally simple. You move around and punch and if you're supposed to be doing anything more complex, such as jumping or climbing vines, all you have to do is hold down a button when approaching and Koru will automatically complete that action. Generally, if things are remotely challenging as far as getting from one place to the next goes, it's due to game mechanics. You'll regularly hop on cords to zip from one location to another and I found it a bit tricky at times to time jumps in order to avoid hazards on those courses. At times, it felt that memorization of their paths came in handy, as those cords will twist and turn, causing obstacles to pop up in front of you with little time to react.

And then we have the security camera portion of the Green sector. You have to travel down a long path while avoiding being detected by a camera that, if it sees you, will automatically blast you with rockets, forcing you to start the entire sequence from scratch with a bit less health. To get through this section, you have lead your mushroom buddy to the proper position, throw a color ball at him so he'll distract the camera and then run to a gap where you lock on and hit it again, doing this repeatedly until you've reached the end of the path. Your timing has to be precise and even being a tiny bit late will result in taking a rocket to the face  resulting in me struggling more with this bit of the game more than any other challenge present.

But those moments of annoyance were few and far between. The Last Tinker might not have the dizzying highs of the best action platformers, but it also did an admirable job of avoiding serious pitfalls, making it a fun game to play for an hour or so over the handful of nights it took to beat it. This is the sort of game that's perfect for when you're playing through a couple deep and involving games and just want something that's light-hearted and laid-back to enjoy for a little while. It's simple, easy to get into and full of vibrant colors that give it a certain visual appeal. Games like this might not be essential additions to a person's library, but definitely can be nice to have around for when the mood strikes.

© 1998 - 2022 HonestGamers
None of the material contained within this site may be reproduced in any conceivable fashion without permission from the author(s) of said material. This site is not sponsored or endorsed by Nintendo, Sega, Sony, Microsoft, or any other such party. The Last Tinker: City of Colors is a registered trademark of its copyright holder. This site makes no claim to The Last Tinker: City of Colors, its characters, screenshots, artwork, music, or any intellectual property contained within. Opinions expressed on this site do not necessarily represent the opinion of site staff or sponsors. Staff and freelance reviews are typically written based on time spent with a retail review copy or review key for the game that is provided by its publisher.