My memory on the subject is fuzzy, but it's entirely possible 2in1: Application Driver and Serial Killer / Sniper is the worst game I've ever spent actual money to acquire. Exclusive to the Nintendo Switch, and known simply as 2in1: App Driver and Sniper in Europe, the game offers exactly what its title suggests. But it doesn't do a particularly good job of it, to put things politely.

The game's listing on the eShop promises "2 fun games with minimalist 3D aesthetics," which is half true. The models are certainly minimalist, employing the use of a few polygons and textures that look like they must have been tossed together by cobbling existing resources from a "beginner game development" kit. The engine runs in Unity, by the way, which is not to anyone's credit that I can see. Terrific games have been made in Unity, but this is not one of them.

There are two attractions on offer, so let's look at those separately for a moment.

The first option, App Driver, casts you as an "application driver" who controls a bulky black car. At first, only one vehicle is available, though you can theoretically unlock a second one by scoring 10,000 points in a 3-minute run.

The city streets are portrayed from overhead. You press the shoulder buttons to accelerate, brake and reverse, while the left analog stick steers. There are no tutorials or controller diagrams to fill you in on any of this, but that's not a problem when the schematic is so standard and limited.

Your vehicle moves like a box on roller skates, and must veer from one point of interest to the next while navigating tight turns in city streets that run through several buildings, around a park, and along a watery bay. Pedestrians wander the sidewalks and alleys, and you might accidentally drive over one of them. 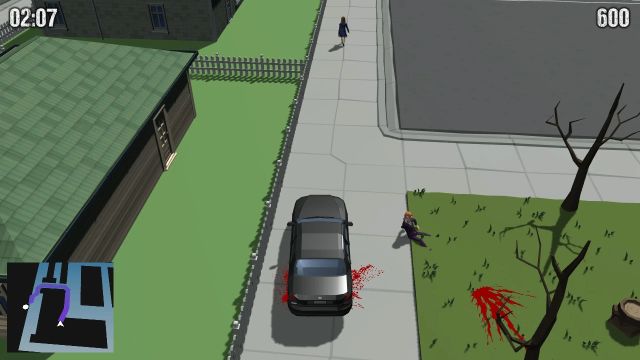 Some games work to prevent this sort of bad behavior, with citizens who spring nimbly out of the way and are impossible to touch. App Driver instead rewards you with a "trample bonus" of 100 points for every pedestrian you kill. I remember politicians in past years demonizing games and talking in horrified whispers about how they awarded players points for killing people, even though the games in question didn't even feature a scoring system. Here, that's no issue. Their indignation would be justified.

But not entirely justified, because none of this feels the most remote bit realistic. Sure, huge red smears appear on the sidewalk if you drive over someone, but they also appear if you just park your car on a sidewalk and let pedestrians slowly walk into you. Which they will do. And that collision earns you another "trample" bonus. You need the points, too, if you want to rack up a higher score, though the game only keeps track of your very highest score. There are no leaderboards.

If you happen to drive carelessly and you need to reverse, the better to kill a few pedestrians who have formed a cluster on a sidewalk, you can reverse. But the camera swings around wildly and backing up feels like guesswork. The controls don't invert or anything, which runs counter to pretty much every third-person driving game I can recall playing. The whole setup just feels bizarre, and altogether too slow. So if I were writing a strategy guide, I would say: "Just drive really fast and ignore the objectives that don't give you many points so you can hopefully run over enough pedestrians before the timer expires." Any other approach is a fool's errand, frankly.

As an aside, there's no splash if you drive off the edge of the docks and fall into the water. I found this more irritating than I can properly explain. Whoever built the game apparently didn't get around to putting together a corresponding animation, so you just appear somewhere nearby and can start driving again. 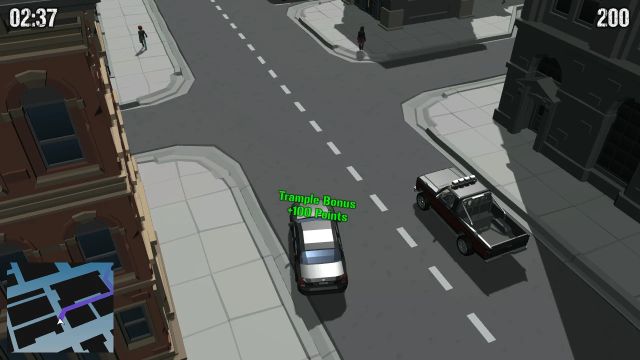 Serial Killer with Sniper, the other game in the two-pack, puts you on the roof of a high building and lets you shoot pedestrians that are wandering the streets. It uses the same assets as the other game in the pack did, which includes both the people walking around--an office lady, a police officer, a businessman and some guy who looks like he must be an army dude or postal worker or something--and the buildings.

You just move your rifle around, find a likely target, then zoom in and fire shots at your targets. A body shot is worth 200 points, while a head shot nets you 300 points. There's no need to adjust for elevation or distance or wind or anything like that; every shot hits precisely where you have the little cursor pointed. You have less time available to do your damage than in the other mode, but scoring doesn't seem as strict. There are two environments, and I didn't see a way to unlock any more of them even as I racked up some pretty nice scores.

It's worth noting that pedestrians in neither game seem overly concerned--or even vaguely worried--with the carnage unfolding around them. They just keep walking about like lemmings, stepping over fallen bodies before they disappear. Is that deep social commentary I'm just not getting, or is it just bad game design?

I remember years ago, I bought Grand Theft Auto and watched my brother-in-law play it on the PlayStation 2. He would sometimes get bored of the mission objectives, so he would climb atop a building and start sniping. As he did, law enforcement would start to respond as civilians ran for the hills. Eventually, tanks and choppers arrived on the scene as his wanted level increased and he became an intolerable menace to the people of Liberty City. That was a compelling sort of experience, as I found when I tried it out for myself. I mention this only to explain that I can enjoy the setup provided here. I just expect it to offer... more.

Compared even to games that have been around for 20 years or more, this one is weak. I'm also not sure why it takes more than 1GB of space to install, or why load times are fairly extended. You also can't pause or bring up menus to back out of games until the timer expires.

Put simply, 2in1: Application Driver and Serial Killer / Sniper is the worst of the worst. It counts on controversial themes to take care of the marketing, then fails to deliver on its dubious concept in an engaging, convincing way. The ESRB has rated it "T" for Teen, probably because everything feels lifeless and uninspired even before you turn it into a mess of corpses. Not recommended.

If you enjoyed this 2in1: Application Driver and Serial Killer / Sniper review, you're encouraged to discuss it with the author and with other members of the site's community. If you don't already have an HonestGamers account, you can sign up for one in a snap. Thank you for reading!

© 1998-2021 HonestGamers
None of the material contained within this site may be reproduced in any conceivable fashion without permission from the author(s) of said material. This site is not sponsored or endorsed by Nintendo, Sega, Sony, Microsoft, or any other such party. 2in1: Application Driver and Serial Killer / Sniper is a registered trademark of its copyright holder. This site makes no claim to 2in1: Application Driver and Serial Killer / Sniper, its characters, screenshots, artwork, music, or any intellectual property contained within. Opinions expressed on this site do not necessarily represent the opinion of site staff or sponsors. Staff and freelance reviews are typically written based on time spent with a retail review copy or review key for the game that is provided by its publisher.