Venture Kid is a rather nice game. It's a very traditional NES-style action platformer, inspired heavily by Mega Man. It's got NES-style graphics and NES-style animation and NES-style music. The Kid jumps about as far and as high as you would expect him to, and there's a very Mega Man-esque rapid-fire of three pellets and three pellets only when you shoot your little pistol. There's cliffs and pits and spikes and a variety of enemies and a boss at the end of each level, with each level being a different theme. If you buy it, you can be certain that there are no critical flaws here. Like I said, rather nice. But how valuable is a rather nice game when there are so many wonderful platformers out there?

That's a question you'll have to answer for yourself, but seriously, just don't expect any miracles here.

But alas, I don't think a one-paragraph review will cut it, so I suppose I better find something else to talk about. The story of Venture Kid is... something, I don't know. I skipped it. And that may sound flippant or being nasty, but I would actually put this in the win column for the game. The game is driven by NES nostalgia, and so it naturally has nothing but an excuse plot. Bad guy tries to destroy the world, good guy stops him. Yes, there is an intro if you care, but the fact that there is nothing that you need to waste time watching is a good thing, as there is really no reason to care and it's so much better that you go straight to the action. So hey, it does one thing right. Yay!

So skip that pointless plot and start the game. As I said, nothing feels bad. The controls aren't terrible, you don't have a ridiculously floaty jump, you aren't moving at a snail's pace, the weapon feels good to fire. The basics are all there. But the level design, the obstacles that you face? Nothing BUT basic. Enemies are slow moving, simplistic, and there's rarely a time when you have to worry about facing two or more at once. So as long as you don't just blindly push forward without paying attention, none of these villains will threaten you in a significant manner. Likewise, the level geometry does not lend itself to tricky jumps or to fusing the action and platforming. On the first level, for example, the last "challenge" is a series of blocks across a lengthy pit, followed by a repeat of the same platforming with a bee or two present to distract you. Fairly typical Mega Man style gameplay, right? Except the bees don't charge at you and are in a location where you can easily kill them before the jump, thereby making the second challenge superfluous. Yes, this is only the first level, but it is emblematic of the lack of cleverness in the design of the levels themselves. The story doesn't change, whether it's the first or fourth level. Just go kill the enemy in front of you, then jump over pits, then repeat.

Same with the currency you can find everywhere. There are little pellets everywhere that you can collect that can be traded in for extra health or increased health meter or whatever, pretty standard. In a game like Mario, coins are placed to either follow your natural path (thereby giving you a satisfying feeling when you grab them all), or they are in an off the beaten path route that requires a challenging jump or two. Venture Kid has some of the former, but rarely anything of the latter. Thus, you rarely have options in the path to take, which is never a good sign. That may seem like a minor issue, but remember, traversing the level is 90% of a sidescroller! The fact that it isn't particularly interesting when you do so is rather unfortunate.

But hey, you made it to the boss. Now, when I play Mega Man, I basically assume I'm going to die the first time I face a boss. You'll get slaughtered easily if you don't know the pattern, so it's best to simply try to stay alive as long as possible and learn its pattern first and only make a serious attempt on the next round. But facing the first boss in Venture Kid? I not only wiped it out on the first try, but apparently unlocked an "achievement" for killing it quickly! It was very simplistic, and not a threat at all. Same with the next few. Oh, eventually there were ones where I struggled a bit and had to slow down and learn their patterns, but it shouldn't take until halfway through the game for that to happen! 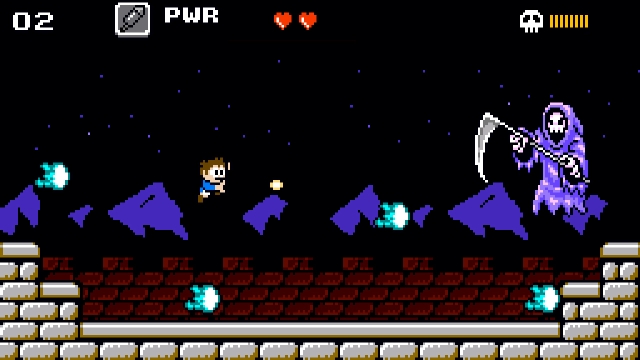 Hey wait a minute, this is a Mega Man homage - what's this Castlevania boss doing here?

Does that sound like it's all going through the motions with you? It does to me. It has all the trappings of a Mega Man-esque platformer, but nothing stands out. Even the currency system falls victim to this. The items you can buy are, essentially, exactly what you would expect. Health refills and a tool to automatically fill up your secondary items, that sort of thing. That's not to say that there SHOULD be different items, but it just serves to further emphasize the lack of anything special. Everything feels like it has been done before, and done better.

And what elements are unique simply don't feel interesting enough to support the whole game. The second level, rather than being linear like the rest, is more of a maze. Weird decision, but ok. Would be better if that heralded a fresh take later on the game, but no, it's just a one-off situation. You get a new weapon after each level, a la Mega Man, but they aren't related to the boss you just killed or used to exploit certain weaknesses in others, so, uh, I guess not a la Mega Man. In fact, their uses are so limited, all being less viable than the main pea shooter in 90% of situations, that you will mostly forget about them. Also, oddly enough, these "weapons" include a double jump and the ability to not take spike damage. Which means, in order to use them, you have to open up those items. And they only have limited number of uses. That makes sense for the spike mitigator, but a double jump? Yeah, it's a unique take, but feels detrimental to fun movement overall. And it also means that the double jump becomes fairly useless, since it can never absolutely be required and you should always save your energy for when you need it.

On the plus side, the game is fairly short (1-2 hours), so trying it out won't waste much of your life. And they added a remix mode where the level order is random, in case you enjoy the game enough to want to play it multiple times. So that's cool, I guess.

There are 23 Mega Man games available on the Nintendo Switch. And countless other clones and inspired takes. Venture Kid is simply one of them. It spends so much effort on being an homage to an NES game that it fails to properly create its own identity, failing to differentiate itself from the crowd. And at the same time, it fails to excel at being an homage, as the level design and enemy challenge is at best adequate. Go back in time and publish this on the NES? It would be pleasant but not a classic. And now that we are 30 years beyond that time frame? Go buy Mighty Gunvolt Burst or one of the other ones instead.

If you enjoyed this Venture Kid review, you're encouraged to discuss it with the author and with other members of the site's community. If you don't already have an HonestGamers account, you can sign up for one in a snap. Thank you for reading!

© 1998-2021 HonestGamers
None of the material contained within this site may be reproduced in any conceivable fashion without permission from the author(s) of said material. This site is not sponsored or endorsed by Nintendo, Sega, Sony, Microsoft, or any other such party. Venture Kid is a registered trademark of its copyright holder. This site makes no claim to Venture Kid, its characters, screenshots, artwork, music, or any intellectual property contained within. Opinions expressed on this site do not necessarily represent the opinion of site staff or sponsors. Staff and freelance reviews are typically written based on time spent with a retail review copy or review key for the game that is provided by its publisher.