My first impression of Eliminate Down revolved around how great the game looks. It's a shooter for Sega's Mega Drive that, unfortunately, never got ported to the United States. Released in 1993, it simply looked impressive enough that I had to remind myself I was playing something on a 16-bit system.

Since Eliminate Down is a horizontally-scrolling sci-fi shooter, it starts with the standard outer space scenery. Except it's not so standard. Your ship starts out as one member of a fleet, with much larger vessels in the background. As you progress through the early stages of the level, you'll see those ships taking damage and exiting the picture. Beat a mini-boss and you'll descend through the atmosphere towards a planet's surface, while needing to dodge or destroy missiles that get larger the closer you get to land. The stage then concludes with you flying over that planet and watching some pretty impressive parallax scrolling in the background.

And that's just the beginning. Eliminate Down has all sorts of visual treats playing out in front of you while a rocking soundtrack fires you up to keep your finger glued to the shooting button. Maybe it's the giant structure you fly over and around in the third level, where large figures burst out of it to launch their assault upon you. Or the sixth level's psychedelic background that starts pulsating more and more as you near the boss. Or the wall of fire that pursues you throughout the seventh stage. Or the weird "glitch in the matrix" effects that turn the last level into an unpredictable odyssey through space. There are plenty of sights to see and enjoy in this game and they just look better than in the vast majority of its peers. While I did notice some slowdown at a couple points, most everything ran smoothly, making this a quite impressive game. 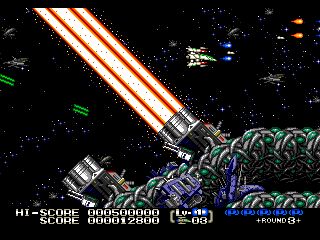 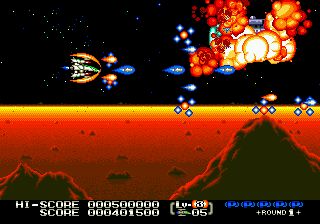 There is one minor negative effect that comes from enjoying the sights and sounds too much in Eliminate Down -- after a bit, you might get the impression that you're Down and the game is living up to its name. While this cartridge gives you all the tools you'll need to succeed and is far more generous than a lot of shooters as far as dispensing power-ups and not utterly crippling your ship whenever you lose a life, it more than makes up for it via the route of simple brutality.

At times, you might be trying to survive frenetic action with enemy ships bursting onto the screen from every direction. This game offers a really cool weapon system where you can switch between three different kinds of fire with the press of a button. You'll always have a straight-ahead shot that can be upgraded to a laser that can penetrate walls and other objects; however, that button will determine where the bulk of your offense will go. Maybe you'll be covering the screen in front of you with bullets, or you might fire missiles diagonally in four directions, or your assault will be focused upon whatever's behind you. The point is, you can easily cover any part of the screen with your attacks, making it child's play to blast enemy ships and guns, no matter where they're lurking. To fight back against your versatility and amount of weaponry, those enemies will be moving quickly, firing aggressively and popping up anywhere at any time.

In a lot of games, the first level is a nice introduction to get you acclimated to the action. Here, things are really dicey until you've powered up your guns a bit. Enemies will be coming at you from all angles and regardless of what direction you're firing, you won't have much firepower to dispose of them. It takes five "P" icons to improve your directional attack once and another five to max it out, so you'll have to both survive and destroy groups of ships for an extended period of time before you've gotten enough firepower to feel remotely comfortable about your chances to survive the frenetic action. At least death doesn't completely neuter your ship, as getting blasted only drops your weaponry one level, so you'll at least have respectable firepower if a stray bullet gets through after you've gotten things maxed.

Reach the end of the second level, though, and you'll realize that all the firepower in the world won't save you if you don't have a photographic memory. Remember the big R-Type battleship level where you fly all around a massive structure, destroying its guns and other weaponry? Well, this stage ends with a similar encounter. And if you're not familiar with its layout and how each part of it attacks, you will die and die again, whether it be because the front of the ship scrolled right through you when you had nowhere left to run or because the rear thrusters covered the entire area behind the ship with fire and you couldn't get by them quickly enough. 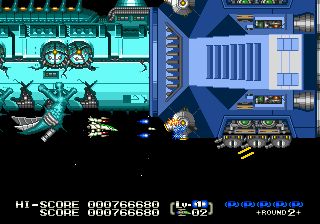 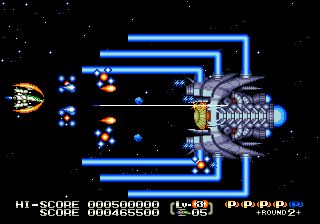 Those R-Type influences show up more and more as the game progresses, with the seventh level in particular feeling like one prolonged death trap. Maybe it's the waterfall of fire plummeting on top of you because you were dumb enough to actually think that *checks notes* flying on the left-most three-quarters of the screen was a good idea. Or maybe it was the three separate instances where the screen scrolls down a bit, only to suddenly plummet, sending you crashing into the floor unless you instantly press up on the control pad. With perfect timingyou wouldn't want to accidentally send your ship crashing into the ceiling instead, would you?

A good number of the game's bosses follow suit. The mini-boss of the second level is a kind, gentle example in that it only fires a bunch of lasers that pin you into a small area directly in front of that ship. Later on, the fifth level's boss acts much the same way, except it's a fair bit trickier to not get blasted because the fight takes place in an enclosed area and its lasers bounce off the walls. And that one pales in comparison to the final stage's mini-boss -- a massive orb that separates into multiple parts, takes up most of the screen with its bulk and has attacks tricky enough to dodge that the reasonably formidable final boss feels anticlimactic by comparison.

Eliminate Down isn't for the easily frustrated, but if you're the patient sort who is willing to die countless deaths in order to advance a wee bit farther, it is quite the rewarding game. The action is both frenzied and methodical -- often both at the same time, regardless of how contradictory that might sound. Visually, the game is a legitimate treat and is the sort of thing I can still be amazed by even if today's technology has advanced light years beyond what we were playing in the 1990s. I'm a sucker for designers finding ways to push systems to their limits and Aprinet, a group I'd never heard of before, did a fantastic job of making the Mega Drive look as good as anything possibly could at that time. While its lack of an American release might have led to this game being bit under the radar, it's definitely worth the time of anyone who's a fan of retro shooters.

If you enjoyed this Eliminate Down review, you're encouraged to discuss it with the author and with other members of the site's community. If you don't already have an HonestGamers account, you can sign up for one in a snap. Thank you for reading!

© 1998-2021 HonestGamers
None of the material contained within this site may be reproduced in any conceivable fashion without permission from the author(s) of said material. This site is not sponsored or endorsed by Nintendo, Sega, Sony, Microsoft, or any other such party. Eliminate Down is a registered trademark of its copyright holder. This site makes no claim to Eliminate Down, its characters, screenshots, artwork, music, or any intellectual property contained within. Opinions expressed on this site do not necessarily represent the opinion of site staff or sponsors. Staff and freelance reviews are typically written based on time spent with a retail review copy or review key for the game that is provided by its publisher.