Business is good, maybe even good enough. But then again, maybe it's not. The powers that be aren't always clear on such matters, you understand. The word for them is "capricious" and they reign on high from a position of favor they earned or perhaps did not. And you? One might say you're nothing but a monkey dancing for the delight of the masses, so they will spend money and make your superiors happy enough that they decide to keep you around for another month or week or maybe even just for the next 3-day sale.

Rip Them Off is a game about the poisonous relationship you have with the people who keep you employed. You never see them, because there's no time for that nonsense and imperious decrees work acceptably well. Instead, you focus on your customers--faceless beings called Dupes--and keep building the shops you hope will convince them to part with all of the money on their person. Anything else is tantamount to failure. 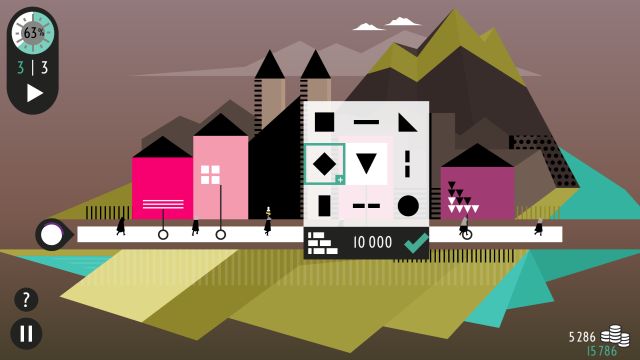 Tower defense games aren't especially uncommon these days, but tower defense games as good as Rip Them Off still are. In part, it manages that feat by being unconventional. There are the expected streams of "enemies." They come in waves and meander through whatever hostile wonderland you might construct and try to pass off as a useful service, but you don't want to stop them from reaching an exit point until they are broke. Then you're happy to see them leave, because there's a fresh mark on the way (a whole throng of them, even) and you have your fiscal targets to worry about.

Playing Rip Them Off, it's easy to see there's a message. Consumerism is bad. The people who shop are the victims. The people who sell, at least on the highest levels, are the villains. And then there's you, caught somewhere in between but mostly serving as a victim yourself.

This social commentary is presented in a delightfully minimalist style that couldn't help but look artsy even if it tried. If you grew up hating pictures of shapes and hearing adults marvel over composition and theme, you might not be impressed. Bring on the landscapes and maybe toss a dragon in there somewhere, right? But in looking more Warhol than Rockwell, Rip Them Off makes a stylistic choice that pays dividends. A stage resembles a pretty little holiday package, missing only a bow. Each new set of challenges begins as that clean template in a word processor program that you can't help but enjoy filling with letters or, in this case, shapes. 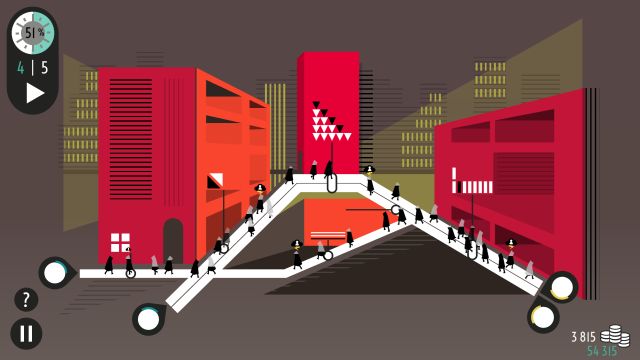 The particular shapes presented in Rip Them Off represent your shops. Even if they just look like a bunch of lines and triangles and squares at first, they eventually take on a personality because of what they mean to your enterprise. The square, for instance, is an affordable shop that accommodates a limited number of patrons but charges them handsomely for their presence. The witless Dupes may linger a bit longer than is ideal, and so the shop may fill up and deter additional visitors for a time, but there's still beauty in that little square shop. The triangle pointing downward, to cite another example, fits quite a few more customers and they also tend to leave more quickly. That's a positive. Going in the debits column is the fact they don't spend nearly as much during their stay. Also, upgrades to the upside-down triangle cost a great deal more resources.

Rip Them Off forces decisions almost constantly and relies on your ability to know and make the most of the rules. Sure, you can wait between waves to make modifications, but that inactivity could build the piles of wasted opportunity that bury you. Money pours in as Dupes roam your shops and you need to respond as soon as you can to improve your efficiency before they all leave. It is vital that you make sure no avenue through your virtual mall is left naked and without a shop. Since no single Dupe feels inclined to make a stop at the same type of establishment twice in one day, you even have to consider variety. The process feels active and demanding most of the time. Even in those brief moments when the pace falters, you can easily put things on fast-forward until something happens that requires your attention once again.

A typical stage consists of anywhere from 3 to 12 waves, though the number most often hovers around 6 to 9. Your progress toward the current objective is noted at each opportunity, along with your shopping center's precise composition as a result of your construction. If you get to the end and you haven't made nearly enough money to appease the faceless overlords, you can retry from the start of any of the waves, all the way back to the first one. This is genius design, because you might get to the final reckoning just a few thousand dollars short and it's possible that going back a round or two and placing different buildings or making different choices about which one to upgrade first will be just enough tinkering to nudge you over the finish line without the need for wholesale changes. 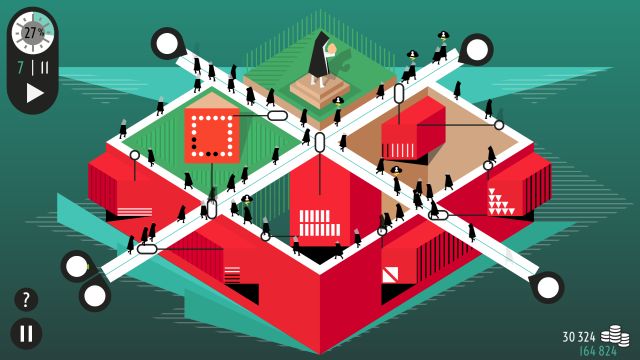 Then again, you still might not really come anywhere close to meeting your objectives, because there's very little margin for error. Most of your biggest mistakes may very well be made right from the start when you place an expensive shop and leave a lane untended to while Dupes stream by. Despite the presence of much more expensive shops and even the generous gift of a free shop or two of your choosing at the start of the later stages, the smart approach is generally to start small and build from there. You have all of the freedom in the world, like a child staring at an upended box of jigsaw pieces, but those pieces tend to belong in very specific locations.

Thanks to its minimalist approach and a surprisingly terrific soundtrack, Rip Them Off has no trouble becoming an addiction, provided you are willing to give its steep learning curve and sometimes clumsy interface time to grow on you. When the action gets fast and frantic, placing the shop of your choosing--or replacing an under-performing store with something more suitable--can feel more laborious than necessary. This may lead to frustration. However, such moments are uncommon enough to avoid becoming an outright nuisance.

If you tend to enjoy tower defense games or other exercises in resource management, and if you like the idea of an artistic take on the genre that feels genuinely fresh and could wind up sucking away hours of your day before you even realize it, Rip Them Off is a delight and easy to recommend. It won't be for everyone. The complete and utter absence of dragons does hurt things a bit, obviously. But those who look past the lack of fire-breathing lizards and become a cog in the retail machine will likely have little difficulty assimilating. And, as a neat bonus, the whole anti-consumerism package is available to buy for less money than you probably spend on a visit to the food court. Being a Dupe has rarely felt so right!

If you enjoyed this Rip Them Off review, you're encouraged to discuss it with the author and with other members of the site's community. If you don't already have an HonestGamers account, you can sign up for one in a snap. Thank you for reading!

© 1998 - 2022 HonestGamers
None of the material contained within this site may be reproduced in any conceivable fashion without permission from the author(s) of said material. This site is not sponsored or endorsed by Nintendo, Sega, Sony, Microsoft, or any other such party. Rip Them Off is a registered trademark of its copyright holder. This site makes no claim to Rip Them Off, its characters, screenshots, artwork, music, or any intellectual property contained within. Opinions expressed on this site do not necessarily represent the opinion of site staff or sponsors. Staff and freelance reviews are typically written based on time spent with a retail review copy or review key for the game that is provided by its publisher.