One summer day, my friend Nathan and I headed to my dad's home office--a camp trailer on the edge of our property--and used the Tandy computer housed there to draft a story. I was always in the mood to write, even then, and my friend was bored enough with the few NES games we had at our disposal that he was inclined to spend a few hours doing something a little different. So we collaborated on a short story. Our tale focused on our local town and an enterprising character we named "Silly Eddie," who opened up a mall and did great business.

The story was as silly as Eddie himself, because the ghost town where we lived had a population consisting of my family and not much of anyone else. Even my friend lived a quarter-mile down a gravel road, outside "city limits." There's no way a mall would have worked, no way any stores could have stayed in business. I bring our flight of fancy up now mostly to highlight just how bad my business acumen was at the time. It hasn't improved a whole lot since that day, either. That is why when I want to build malls, my safest bet is to turn to a video game like Mega Mall Story 2. 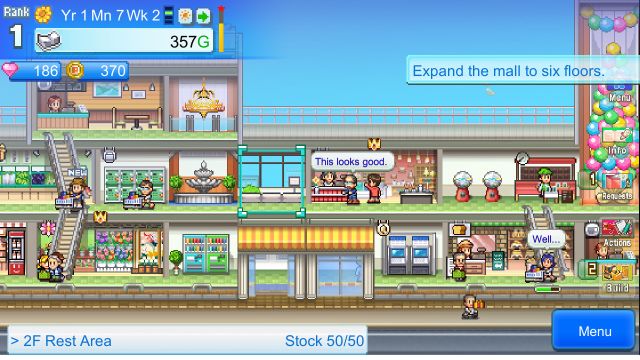 Developed and published by Kairosoft, Mega Mall Story 2 places you in the shoes of a mall manager with a limited budget and big dreams. You start with a complex that can support a few stores on two floors. Eventually, you will expand the structure horizontally, plus build many floors higher and even dig out a few layers underground. Your ultimate goal, which you must execute within 15 years, is to produce a magnificent specimen of mall that qualifies for a 5-star rating. That's pretty much all there is to the design, but it's enough to make for a pleasantly diverting experience that lasts most of 10 hours or more.

Mega Mall Story 2 might be the sequel to a game I've not yet played, but there's no reliance on experience with its predecessor and there are no narrative hooks. You just need to build smartly and rely on in-game prompts and advice. An informative 30-page tutorial file is available to walk you through most of the finer points, if you wish. Otherwise, most of the first few actions you take are guided so that you learn the basics before proceeding without doing any extra reading. Menus are simple, as is the Kairosoft way. You can navigate them in handheld mode and optionally take advantage of touchscreen controls, or you can play on your television screen with a controller. Either way, the intuitive menus minimize the likelihood of headaches.

Your mall is presented from a simple side perspective that makes it easy to tell which stores are operational and how they connect to one another. Often, you build those connections yourself by installing stairs or escalators or elevators. A store's location matters a lot, as it can increase the cost of construction or improve reputation, which in turn determines how much inventory you move. During each period, you also are presented with unique challenges. For instance, you may be ranked based on the total sales from food-based outlets below the fourth floor. Doing well in these events earns you new store types so you can satisfy pickier customers with fatter purses. You also have the ability to designate sales and make changes to the staff you employ, which adds additional layers of strategy. 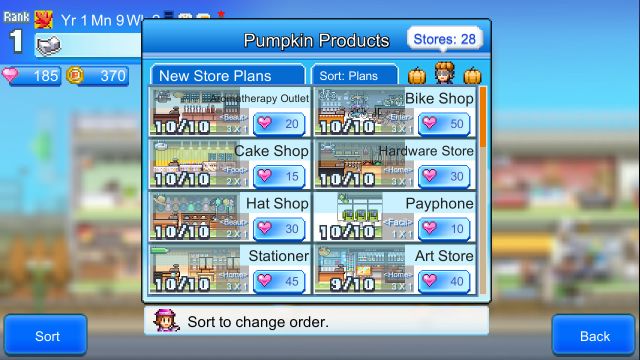 One especially vital bit of strategy concerns the concept of the "combo," which left me scrambling on more than one occasion. Stores never perform better than they do when they are in true harmony, and you can pay to learn about any combos you don't discover on your own. Combos often require you to build establishments you haven't yet unlocked, inevitably kicking off a new quest to figure out just which businesses you need to invest in and improve to a point that will satisfy a new customer and allow you to rank more readily in the various sales events. There are literally dozens of combos available, and you can't afford to ignore them forever (in part because along the way, you must activate a minimum number of them to reach the next mall rank).

Because the game's flow is kept fairly basic and rarely complicated more than is necessary to keep things interesting and unpredictable, it's easy to start playing and to understand most of what you're doing right from the start. That simplicity doesn't prevent things from sometimes feeling quite demanding, however. You can only completely fail at so many events, you soon realize, before any perpetual inadequacy starts to affect your prospects of earning the desired rank for your mall. The race to 5 stars must guide most actions you take, which sometimes makes progression feel restrictive if you can't (for example) build the sushi restaurant you want because you need to spend those resources upgrading the pet shop or the butcher.

Still, fifteen years of in-game time take a fair while to pass here in the real world, affording you a reasonable amount of freedom to work creatively. That's especially true if you manage to get off to a good start. You just have to remember not to ignore customer requests for too long, since completing them enables you to unlock almost everything you must rely on to produce a truly successful venture. I was so busy playing around on my first trip through the campaign that I got to the end a little bit short of what I needed. A crucial VIP had refused to show up as planned. The game then informed me that while I could keep playing for as long as I wanted, nothing I did would really matter. It didn't use precisely those words, but the meaning was clear enough. 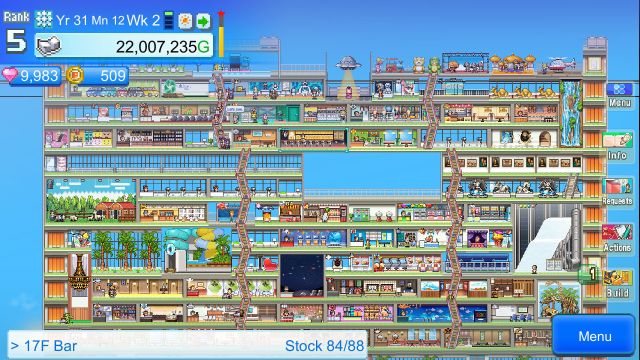 When you reach that point, assuming you do, you'll find you can start over with ready access to any of the buildings you unlocked on your previous run. That convenience makes it simpler to begin your second run with a head start, so that you can focus more readily on requests and prioritize activities most likely to yield the desired result ahead of schedule. Getting there on the first attempt would be more satisfying still, but it's hardly vital.

Mega Mall Story 2 is a great way to spend a few days of pleasant gaming, or perhaps even a few weeks if you break down play sessions into smaller chunks. That's easy enough to do, since you can save your progress whenever you like and come back later without losing even a second's progress. The relaxing vibe and a lack of immediate penalties when you make mistakes is soothing and could go a long way toward keeping the game in rotation, so to speak.

While Mega Mall Story 2 certainly isn't for everyone, I had a generally good time playing it and I recommend it to anyone who has ever dreamed--however briefly--of managing a mall and building a retail empire. Perhaps the audience for such an experience isn't as wide as it would have been in the early 90s, when my friend and I were documenting the fictional adventures of Silly Eddie and functioning malls were more common. But that audience clearly exists to some extent, and maybe you're even part of it. Consider giving the game a try to see for yourself.
4/5

If you enjoyed this Mega Mall Story 2 review, you're encouraged to discuss it with the author and with other members of the site's community. If you don't already have an HonestGamers account, you can sign up for one in a snap. Thank you for reading!

© 1998-2021 HonestGamers
None of the material contained within this site may be reproduced in any conceivable fashion without permission from the author(s) of said material. This site is not sponsored or endorsed by Nintendo, Sega, Sony, Microsoft, or any other such party. Mega Mall Story 2 is a registered trademark of its copyright holder. This site makes no claim to Mega Mall Story 2, its characters, screenshots, artwork, music, or any intellectual property contained within. Opinions expressed on this site do not necessarily represent the opinion of site staff or sponsors. Staff and freelance reviews are typically written based on time spent with a retail review copy or review key for the game that is provided by its publisher.