Wild Park Manager is the latest of many Kairosoft games to arrive on Nintendo Switch, but I'll be honest with you: I haven't actually played a whole lot of them. They tend to suck me in and keep me busy for hours on end, and I don't always have the time to spare. But I decided to take my chances again. As feared, I quickly became happily addicted.

The idea here is that you've been put in charge of a small park on the edge of town. You mean to turn it into a grand park of the sort people will travel from miles to see, so you start with a few simple exhibits and from there build your empire. It's a lot like Zoo Tycoon in that respect, but with the cutesy presentation you would expect from a niche developer with big dreams and a smaller budget. 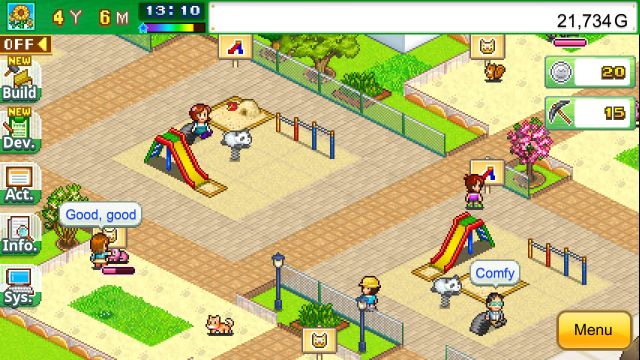 There's not a lot to the interface, actually, which is just how I like my sims. Kairosoft has a lengthy background as a mobile developer, and in fact this particular title came out on iOS and Android devices in 2017. The simple interface carries over beautifully and is the perfect match for the Switch, plus you gain the ability to play on your television screen with a controller. That's the route I took, and I'm happy to say everything looked lovely even on my 68" set. Either the game was designed with plans to magnify everything a few years down the road, or the team went back through and touched up older assets more recently.

You build your park a little bit at a time. First you must decide what type of zone you wish to create and clear the appropriate number of tiles by digging away debris such as stone, dirt, rocks and trees. If your excavation reveals water, well, it sucks to be you; there's no building on water, though ice is another matter. Once you have decided on a zone type, you can then place the desired facilities, provided you have the resources on hand to build them. Then you can decorate both around your zone and (often) place shrubbery and other such things within the facilities. Oh, and you can invite animals, which will agree to stay only if they take a look at your handiwork and are suitably impressed. 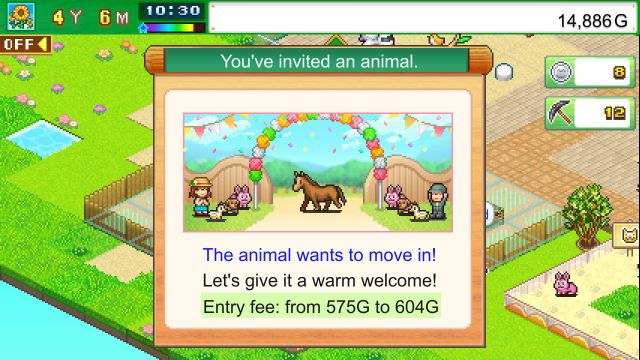 Resource management becomes a going concern. You can only dig as much as your energy permits, and then you must wait as your energy slowly regenerates, except when you enter "contests" and win a bunch of energy all at once. But it's never enough, especially if you're doing a shoddy job of choosing zones and facilities and decorations that work well together. Your exhibits are rated based on how relaxing, active and scenic your visitors and the animals find them. Variety is rewarded and demanded, so you can't just set down a bunch of the same stuff and expect runaway success.

As the game progresses, you face tougher challenges and bigger rewards. It's possible to expand the square footage available, and you'll bring on additional visitors who double as workers. Your park becomes a machine that produces rarer resources you then pour back into the building effort, slowly pushing your boundaries so you can expand and attract new species and gain access to additional structures. 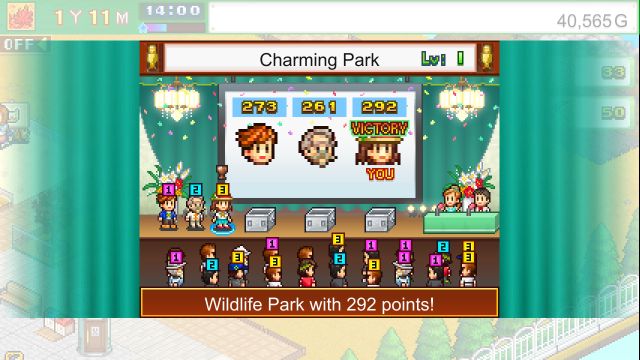 Wild Life Manager isn't an especially difficult game, which is part of what makes it such a pleasure to play. If you're looking to wind down after a stressful day at work, you can do that here. The strategy required never gets particularly deep. As long as you pay reasonable attention to your budget, you won't run into a lot of menus telling you what an awful job you're doing unless you attempt challenges you have no business attempting. In this way, you're rewarded rather than discouraged, and that happy vibe is enforced by both the charming visuals and the generally peppy soundtrack that plays in the background.

Some players might wish for more complicated play and a bit more realism where the finer points are concerned. For instance, it doesn't seem quite right that I can place a fox and a chicken in the same exhibit and they'll be quite content with the arrangement. Concepts such as biomes are presented only in an extremely limited manner. There are a few animals that demand an aquatic zone, and some that won't take to that at all, but otherwise you can mix and match to your heart's content.

One frustration I did encounter is that elevation matters when you're first clearing a zone, but sometimes it is difficult to determine a particular space's height due to the camera's fixed isometric perspective. You can't rotate for a better view, either, which means sometimes you might try to plop and 8x8 zone on a seemingly flat field, only to find that apparently one or more of those spaces is higher than the others, or that you have failed to raze the entire field to the base level. I sometimes also encountered an error message telling me I couldn't overlap exhibits, even though I wasn't attempting to do so at the time. End-of-year reports also have the word "dummy" in tiny text next to one figure, which I take to be a placeholder and not the developers actually questioning my intelligence. So there are rough edges, but they are few and far between. 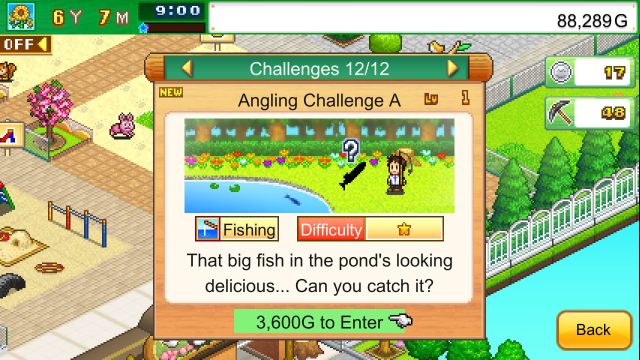 On the more positive side of the scale, I was impressed by how active the park can be during its peak hours and seasons. I had fun at one point watching a visitor as he wandered around the park and interacted with various exhibits, especially when he spent generously at my vending machines. Since all of that activity is only good news for the player, it's a nice way to pass the time while waiting for more dig energy to arrive. The game also automatically speeds up and slows down as appropriate, so that you have time to manage things carefully in the middle of a contest or challenge and so you don't have to wait out a few excruciating minutes with a nearly empty park late in the evening.

The team at Kairosoft definitely knows what it is doing at this point, having developed dozens of sim/tycoon games for mobile devices and Switch, and Wild Park Manager is another triumph for that design philosophy. I like a game that lays down a few ground rules and then frees me to have fun building and figuring out how to be most efficient and creative. So I had a good time here, and I would venture a guess that if you're into that sort of experience, you will too.
4/5

If you enjoyed this Wild Park Manager review, you're encouraged to discuss it with the author and with other members of the site's community. If you don't already have an HonestGamers account, you can sign up for one in a snap. Thank you for reading!

© 1998-2021 HonestGamers
None of the material contained within this site may be reproduced in any conceivable fashion without permission from the author(s) of said material. This site is not sponsored or endorsed by Nintendo, Sega, Sony, Microsoft, or any other such party. Wild Park Manager is a registered trademark of its copyright holder. This site makes no claim to Wild Park Manager, its characters, screenshots, artwork, music, or any intellectual property contained within. Opinions expressed on this site do not necessarily represent the opinion of site staff or sponsors. Staff and freelance reviews are typically written based on time spent with a retail review copy or review key for the game that is provided by its publisher.