As its name implies, GENSOU Skydrift offers another romp through the "Touhou" shared universe that has in recent years hosted games from a wide variety of developers spanning numerous genres. There are a few recurring themes and settings each time out, and many of those hallmarks do make an appearance here, but otherwise there's little connecting the game to whatever shooting, puzzle, RPG or platformer title you might have explored on a previous journey to the land of Gensokyo.

With that out of the way, there remains the obvious question: how does GENSOU Skydrift fare strictly as an arcade racer, independent of its barely relevant license? I was hoping for a compelling experience with tight controls, beautiful tracks, satisfying difficulty balance and clever items. What I got fell a bit short of that mark. 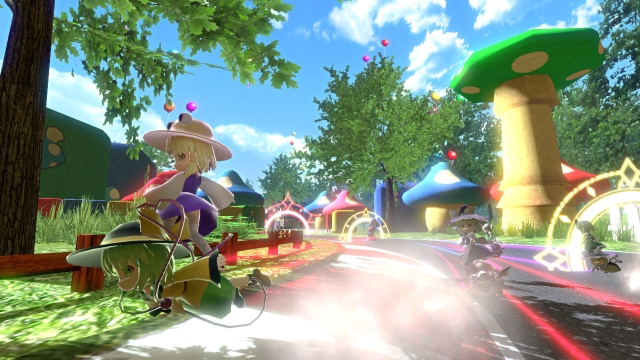 The game's basic campaign is divided among ten standard races, which are connected by a weak plot that barely develops from start to finish. Someone is going around and stealing magical powers from the familiar heroines. Alarmed, those lovely ladies chase after the culprit in a series of races before finally they catch up and the credits roll. Once that occurs, you can then access the numerous venues in "Versus" mode (which lets you play by yourself against AI, or against a friend, or online) or in "Free Run" (which is basically just Time Trial), along with a few extra courses. The plot also continues, though I almost didn't notice that fact because I missed seeing any indication of the fact. The PlayStation 4 version has a few extra venues compared to the Switch one released previously, which is a nice bonus that may account for the fuzzy sign posting.

The game's unique hook is that you get to select two racers at once (or the plot does on your behalf, if you're in the campaign), sort of like in Mario Kart: Double Dash!! Each girl has different proficiency in areas like speed, boost and drift, in addition to powerful unique spells that can turn the tables in a close race. You want to pair two "drivers" who have complementary stats, rather than roughly the same capabilities, since you can switch between them as you race. Courses are pretty lengthy in general with room to mix things up a bit. Sometimes you might come against a series of tight corners and slower speed but better drift is hugely beneficial. Elsewhere, you come to a straight stretch and you need to haul ass to stay ahead of your worthy competition.

Controls are responsive, which I've found is surprisingly uncommon in racing games. I especially appreciate it here because even though your two girls are flying around at low altitude, "drifting" is a central component of any strong performance. In probably two thirds of the tracks, you hardly need to slow your acceleration at all because you can just swing around a tight turn and keep going with barely any momentum lost. It takes a little getting used to, but it works well. 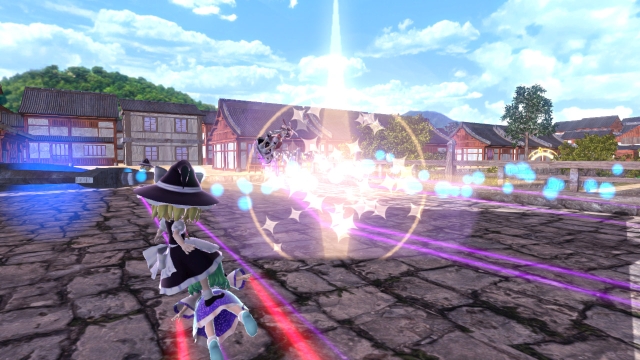 Unfortunately, the game lacks a sense of physicality. Racing along a track with giant mushrooms, you might expect to feel some sort of bounce when you collide with one, but of course that doesn't happen because you stay airborne the entire time. On a lot of early tracks, there are guard rails you'll slam against if you take a turn poorly, but it doesn't feel like a collision, just a faint brush with a barrier. Even when enemies hit you with projectiles weapons and send you spinning, it somehow doesn't feel like anything happened except that you abruptly halted and must wait a moment before you can properly accelerate again.

As you navigate each course, you'll find a lot of arches you can pass beneath for a boost that lets you build and maintain speed. Passing through them also adds juice to a meter. Once that meter fills, you are able to spin a roulette to access a spell you can use on your rivals, like items in Mario Kart. Most of what you'll get here just offers a boost of some sort, though there also are a few missile type spells. Character-specific moves aside, none of them feel as distinctive as a banana peel or a blue shell or lightning. Even so, they can ruin the AI's day and that's what matters. 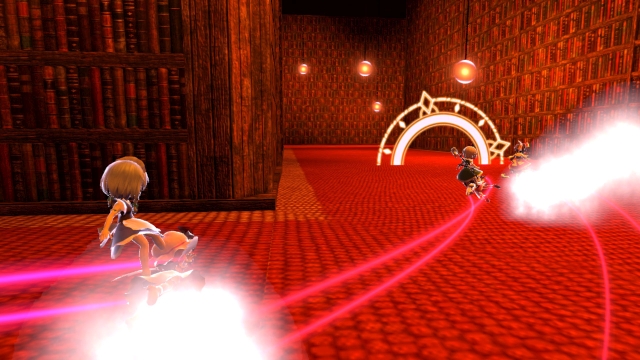 Speaking of the AI, there is a bit of rubber banding going on and it can make for some frustrating runs, particularly since you don't "win" a race unless you cross the finish line in first place. On some of the later courses, which have one hairpin turn after another, just staying on the track sometimes feels like an accomplishment because visibility is often poor and it's not always clear which direction you need to take unless you're monitoring the mini-map. A lot of those problems diminish as you memorize maps after playing them numerous times, but it still feels cheap when you manage a stellar performance and someone zips by you at the last second, even though on your previous attempt you got to the finish line five seconds slower later and missed finishing first by roughly the same margin.

One final gripe is the smattering of technical rough edges. Sometimes music will be playing and it cuts out briefly, whether you're on a menu or the in middle of a high-speed race. There's also a lot of clipping. If you get near the edge of a track but manage to steer clear, the game doesn't always recognize that fact and you could get hung up along the architecture. Occasional stuttering also occurs, and the draw distance isn't always up to snuff. I realize it's not super realistic to go into an indie game like GENSOU Skydrift expecting a thoroughly polished experience, but here the technical blunders sometimes get in the way of my fun and I can't help but resent that a little. Even the music cutting out is a bit of a bummer, because the soundtrack features some surprisingly solid compositions from SOUND HOLIC and StarDrops. I have no idea who they are, but they did a good job here.

GENSOU Skydrift is a decent but not exemplary arcade racer that doesn't give its most lauded peers any real competition. It could do with more tracks and more polish, but it does feature enough bright spots to make it clear the central ideas are sound even if the execution leaves something to be desired. Give it a look if you spot it during an especially generous sale or if you just love the "Touhou" license, but even then you should make sure to explore a few of the more obvious options first.
3/5

If you enjoyed this GENSOU Skydrift review, you're encouraged to discuss it with the author and with other members of the site's community. If you don't already have an HonestGamers account, you can sign up for one in a snap. Thank you for reading!

© 1998-2021 HonestGamers
None of the material contained within this site may be reproduced in any conceivable fashion without permission from the author(s) of said material. This site is not sponsored or endorsed by Nintendo, Sega, Sony, Microsoft, or any other such party. GENSOU Skydrift is a registered trademark of its copyright holder. This site makes no claim to GENSOU Skydrift, its characters, screenshots, artwork, music, or any intellectual property contained within. Opinions expressed on this site do not necessarily represent the opinion of site staff or sponsors. Staff and freelance reviews are typically written based on time spent with a retail review copy or review key for the game that is provided by its publisher.