At some point in the distant future, all of the humans leave Earth in rocket ships. They abandon the otters, and that's just fine with the furry mammals. But soon, soaring temperatures make it clear mankind had the right idea. Faced with the prospect of unlivable conditions, the otters put together a space program. They salvage leftover rocket parts and start building the vessels they hope will carry them to the stars. The third time is the charm, sort of, and finally some of them get to live their astronaut dreams.

Space Otter Charlie begins with the otters adrift in space. You are Charlie, the game's hero. You will salvage several space stations in an attempt to acquire fuel and other necessities, so that you and your pals can live long enough to discover a new home planet. One with water on it. 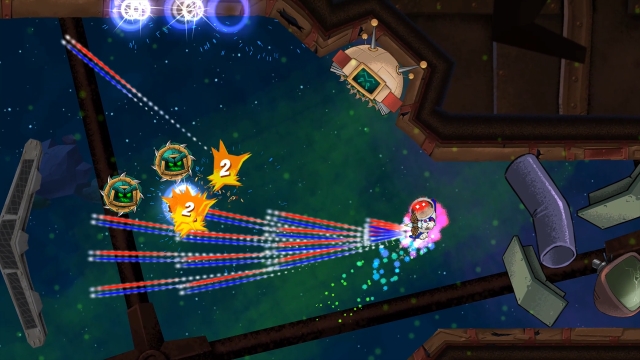 The action unfolds in a series of six sprawling stages. You leave your ship, select an available space station, and start exploring. Once you complete your objectives and salvage whatever loot you can, it's back to the ship to buy upgrades. Then you can tackle the next required stage, or possibly venture into an optional stage for more blueprints and in-game currency. In one sense, Space Otter Charlie is a pretty typical 2D platformer. But in another, it's unlike any platformer you've probably played.

Rather than simply running and jumping through the environments, fly. Your suit is equipped with thrusters that propel you forward in a brief burst. Then gravity takes over and you continue floating in the relevant direction. You can apply thrusters again and steer, or you can land and slide along walls a short distance. If you do nothing upon making contact, you'll stick to the surface and maybe even hang from the ceiling or a wall like a bat. From your new vantage point, you can either launch in a new direction or stand and fire on enemies with your blaster.

At first, getting a handle on the controls might prove difficult. There's likely to be a lot of inelegant bumbling around corridors, since it's not really possible to just run left or right and old habits die hard. However, a bit of practice makes a huge difference. Soon you'll be floating through narrow openings like it's no big deal, drifting through twisting corridors and blasting enemies, propelling large crates to block lasers and whatever else otters do to amuse themselves when lost in space. 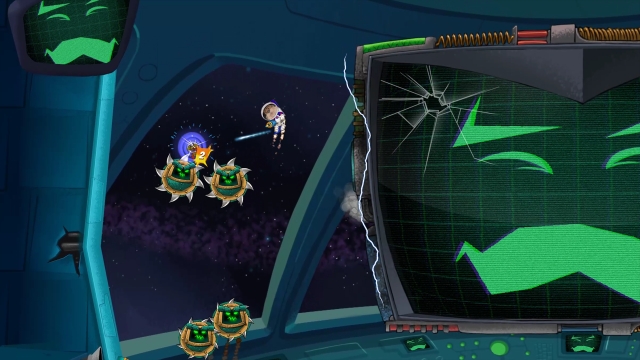 Stage designs are unspectacular but solid, generally requiring you to find several keys to unlock gates so you can proceed toward a distant point on the far side of the map. There's a bit of backtracking but nothing unbearable. Most regions are over and done by the time you start to tire of them, with the exception of the ridiculously expansive and fiddly final stage. Progression tends toward the linear side, but there are some secret passages you might not notice at first. It is possible to get lost, but once you get used to consulting the map, finding your way around shouldn't prove difficult.

Boss battles kick the tension up a notch, though there aren't many such encounters. Coming out alive typically requires a lot more precision movement. Charlie can't take a lot of hits without dying, so you have to practice your dodging maneuvers and it pays to memorize attack patterns. Your adversaries can soak up quite a lot of damage before they are down for the count, and you won't win by facing them head-on. Instead, you must learn to put the surrounding environment to use. For instance, an enemy might fire shots at you that can tear you apart in a hurry, but you'll notice you can jump and stick to the back side of a ledge and from there fire shots that ricochet and strike your foe, greatly reducing your risk. 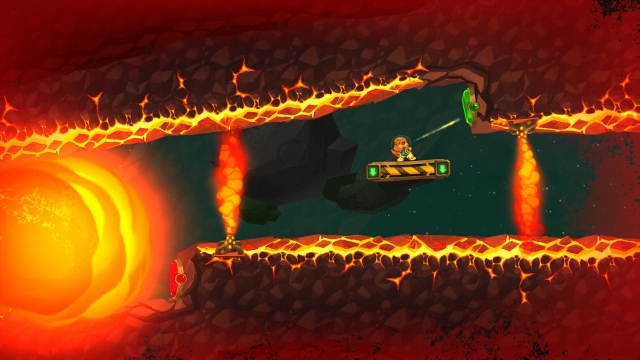 Early on, the game is pretty easy. Most of the difficulty comes from a lack of familiarity with the controls. But as the campaign progresses, proceedings become considerably more demanding. There's one long stage near the end where you have to race along a pathway with a huge fireball following behind you, and the margin for error is razor-thin. Fortunately, checkpoints are generously placed throughout the game, so that you rarely lose much progress even when you do bite the big one. Less fortunately, failure is often followed by a 10-second load screen. In a game with a few difficult spikes where instant death is entirely possible, such delays aren't soothing to potentially frayed nerves.

One of the most disappointing things about Space Otter Charlie, though, is its brevity. You might easily start playing in the afternoon and finish the entire campaign--including all extra stages, with all items gathered--a few hours later. That's what this critic did. There's not much reason to play again, unless you're in the mood to speed run or something. Available unlockables include more effective weapons and alternate costumes, but they don't really add much to how the game plays other than looking cute. The same is true of the other otters you can pay to bring on board. They just kind of float in a pool, not doing anything interesting (though their names and stats are amusing). 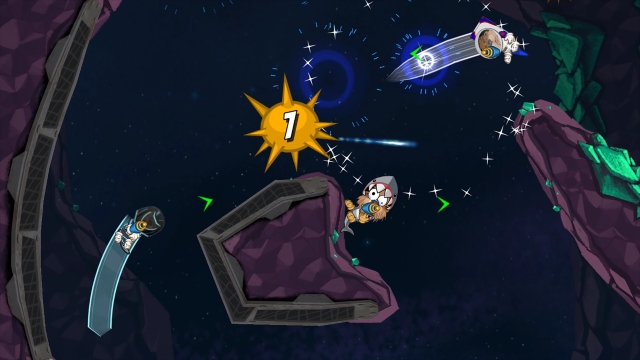 Luckily, there is a local multiplayer mode that could provide some actual lasting value. It's competitive, not cooperative, which means you'll probably have the best time if you go through the campaign first and then challenge others who have done the same. Otherwise, one competitor or another will have an unfair advantage. That's especially true, given just how much the unconventional controls affect everything. There are two modes available for anywhere from two to four players. In one of them, you try to grab several urchins and munch them down before your rivals do. The other option is good old-fashioned death match. Both options prove surprisingly fun, thanks to a selection of dynamic arenas that feature lots of traps and drops. Things can get downright frantic, which makes for a pleasing party game.

Space Otter Charlie was created by Wayward Distractions, a small developer consisting of some key talent responsible for past PopCap Games hits. There's a lot of personality on display to do that pedigree proud. The gameplay doesn't always live up to the attendant flair, but even so, the physics-based exploration is good for a few hours of fun. The the surprisingly engaging local multiplayer modes are just icing on the cake. If you're looking for something a little different to add to your digital library, you could certainly do much worse. Otters in space are good fun. Who would've thunk it?
3.5/5

If you enjoyed this Space Otter Charlie review, you're encouraged to discuss it with the author and with other members of the site's community. If you don't already have an HonestGamers account, you can sign up for one in a snap. Thank you for reading!

© 1998-2021 HonestGamers
None of the material contained within this site may be reproduced in any conceivable fashion without permission from the author(s) of said material. This site is not sponsored or endorsed by Nintendo, Sega, Sony, Microsoft, or any other such party. Space Otter Charlie is a registered trademark of its copyright holder. This site makes no claim to Space Otter Charlie, its characters, screenshots, artwork, music, or any intellectual property contained within. Opinions expressed on this site do not necessarily represent the opinion of site staff or sponsors. Staff and freelance reviews are typically written based on time spent with a retail review copy or review key for the game that is provided by its publisher.