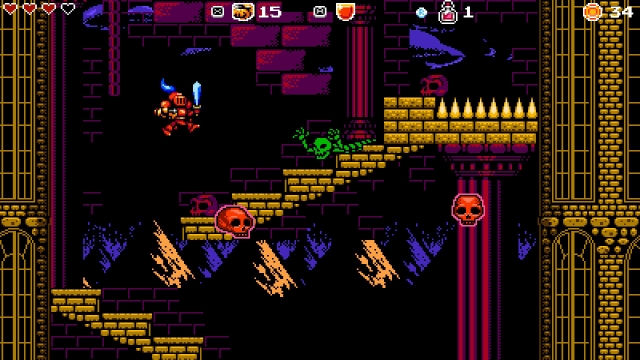 I want to say I still haven't grown tired of "Metroidvania" games after playing eighty thousand of them. However, you and I both know that claim would be a lie. The truth is I'm exhausted of the pathfinder rigmarole, so much that I'm surprised Cathedral even showed up on my radar. Somehow, though, I mustered my remaining enthusiasm and once again embarked on the familiar, maze-like quest, voyaging through branching hallways and into chambers until I ran afoul of a roadblock. I knew I'd eventually be able to pass it once I acquired a new ability or item later in the proceedings, and figured that this title would be rife with tedious backtracking like any other product of its kind.

But strangely, I enjoyed the familiarity this time...

I partly attribute my enjoyment to the game playing heavily to its genre's strengths. It sports a simple combat system, consisting mostly of basic sword swipes and a downward, midair thrust that's actually quite useful. For healing, you carry a potion bottle that functions similarly to Dark Souls's Estus Flask, as it gives you a limited number of uses that can be refilled at certain checkpoints. The minimalist battle system allows this adventure to shine more brightly where it ought to: stage design. Each area you explore offers a fairly elaborate layout, with plenty of secrets and barred off areas that become accessible as you advance the storyline. An early-game forest provides the best example of overall design, as it breaks into three or so sections that become relevant at different points in your travels. Best of all, returning to the impasses you cross always rewards you handsomely. In the forest, for instance, one of the inaccessible pathways leads to an optional boss encounter that hooks you up with a new sword. Other sections provide armor augmentations or chests loaded with cash for purchasing new goodies, which are just as good as that fresh, shiny blade.

Eventually, you discover a few villages with NPCs that send you on side quests. I know that's standard material nowadays, but it's no less great that the game keeps you busy and reinforces backtracking. One of my favorites--and this is coming from someone who isn't thrilled with fetch quests--involves securing one hundred missing library books. For every twenty you return, you receive a nice little gift from the library, usually in the form of an armor, health or potion upgrade. Is that a tiny shred of Grand Theft Auto III I see in my adventure platformer? 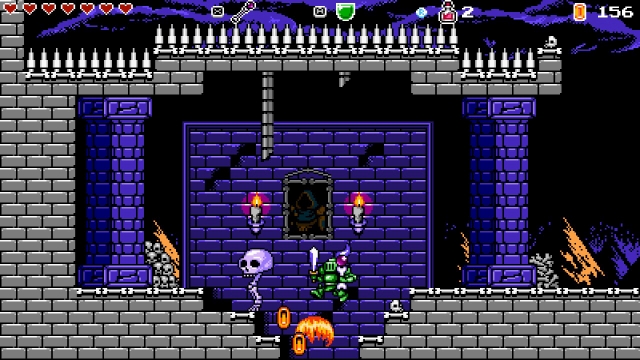 The above content sounds par for the "Metroidvania" course, but Cathedral stands out just a tiny bit more than your average offering by throwing some of The Legend of Zelda into the mix. Your journey revolves around opening a door to the final realm, and that requires you to scour five other dungeons and defeat their guardians. Each of these points in the campaign play like Zelda-style temples, where you plow through a network of interconnected environmental puzzles or gimmicks (e.g. filling rooms up with water, toggling various switches around the premises, using teleporters located all over the complex, etc.), locate a map, find a new gadget or ability that helps you solve the final phases of the labyrinth, fight an area boss, and even snag a heart container.

Make no mistake, though: this is no Symphony of the Night, where you can solve almost any situation by locating new equipment or grinding. Granted, you can buy or locate some new armor and swords, but only a few of each. Plus, the previously discussed armor augmentations only offer so much protection. They might reduce your chances of being frozen, allow you to respawn with an additional heart, or even grant an extra one percent chance of avoiding damage, but they don't make you even close to unbeatable. You still have to find ways to mitigate damage by weaving around your foes, blocking with a shield, and picking the most opportune moments to strike. The hell of it is every place you go is loaded with enemies and traps. Almost any time you attempt to avoid one, you end up getting nailed by the other.

You learn to cope with each new situation, mostly through practice and experimentation. You figure out the best methods for getting past whole gauntlets of giant knights, overcoming the overwhelming number of creatures that await you in the jungles, defeating a seemingly invincible mermaid queen, slipping past indestructible ghosts in a massive tomb... Practice teaches you how to survive apparently impossible odds, or even take out a boss unscathed. Going back to the mermaid queen, she has a phase in her encounter where she bombards you with blasts that seem unavoidable, then charges at you so quickly that you can't possibly hit her. Instinct tells you to remain in the fray and play her game, where experience teaches you to pick a corner where very few projectiles can reach you and hit her with a series of downward thrusts when she draws near. 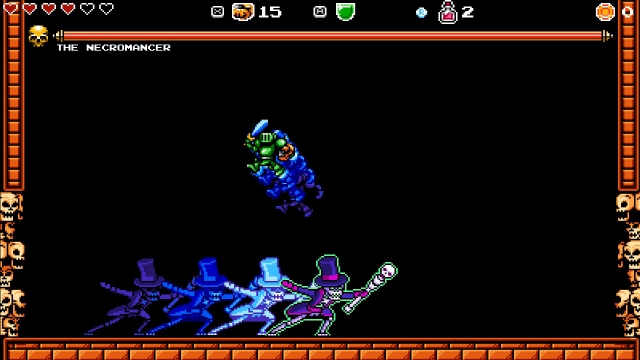 Unfortunately, the final couple of stretches hit you with some top tier nonsense, including a mountain-themed stage where you climb multiple series of platforms to reach a summit. If you miss a jump or get knocked off a ledge, you could end up falling several "rooms" downward. You then have to redo multiple segments just to get back to where you left off, hoping that you don't falter once again. You eventually arrive at the final two sections, where the game bombards you with horribly tricky moments. One pits you against a section where you need to float through openings in several walls and double-jump just right, or fall into a place where you cannot ascend. Your only recourse is to use an item to teleport back to the last checkpoint, which requires roughly ten seconds of waiting before you finally vanish. That might not sound like much of a wait, but it adds up when you do it dozens of times. You eventually get through that BS, only to find yourself racing a quickly descending ceiling while throwing switches to remove obstacles. You need to hit every jump and dash just right during this challenge, and one wrong move or momentary hesitation sends you back to the beginning of the irritating platform segment before it...

During the finale, you encounter numerous spots where you create a horizontally moving platform with a wand to get across wide gorges, all while avoiding electric barriers that deal hefty damage and floating skulls that respawn mere seconds after being destroyed, not to mention environmental hazards that instantly kill you. Also, the level offers very few checkpoints, so constant death results in redoing numerous tough segments to the point of madness. Thank goodness the game's mechanics prove solid enough to get through every trial, and that even the more frustrating segments remain exhilarating despite their annoyance factors. 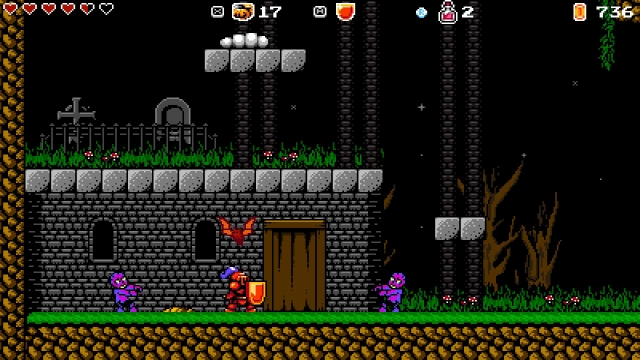 By the time you're done, you'll collapse into an exhausted heap, glad it's finally over, but also saddened that it may be the last good Metroidvania you play for a long time. If nothing else, Cathedral proves that tired categories don't necessarily need to lean on new concepts or gimmicks. Sometimes you only need to borrow the right ideas from certain inspirations to breath a bit of life into a worn out genre.

If you enjoyed this Cathedral review, you're encouraged to discuss it with the author and with other members of the site's community. If you don't already have an HonestGamers account, you can sign up for one in a snap. Thank you for reading!

© 1998 - 2022 HonestGamers
None of the material contained within this site may be reproduced in any conceivable fashion without permission from the author(s) of said material. This site is not sponsored or endorsed by Nintendo, Sega, Sony, Microsoft, or any other such party. Cathedral is a registered trademark of its copyright holder. This site makes no claim to Cathedral, its characters, screenshots, artwork, music, or any intellectual property contained within. Opinions expressed on this site do not necessarily represent the opinion of site staff or sponsors. Staff and freelance reviews are typically written based on time spent with a retail review copy or review key for the game that is provided by its publisher.