Over the years, I've played one hell of a lot of shooters and I can safely say that the Genesis' Raiden Trad definitely is one of them.

For good or bad, I'm not quite sure. If someone was insane enough to think my life was so significant that everything I've done deserves to be documented for future generations, it would be unlikely that this game would elicit much more than a footnote. Perhaps a sentence along the lines of: "And, among other shooters, he also played" that would mention this game, as well as a few other forgettable experiences I've put myself through.

That's Raiden Trad in a nutshell. I didn't dislike the game and, at times, even enjoyed its action. But it was a rather plain and drab game that doesn't really do much to stand out in a positive way. If anything, playing it left me a bit confused because Raiden is a pretty long-running series, with its fifth game released in 2017. I have no idea how the series has endured for so long because there really isn't much to its first offering that would suggest that sort of longevity.

The initial Raiden came out in arcades in 1990 and had a ton of ports. Confusingly, its versions on both the Genesis and Super Nintendo were named Raiden Trad despite being released by different companies and being substantially different. From doing a bit of research, it seems this version was more accurate to the arcade original, while the SNES port was altered in a number of ways -- few, if any, of which were to the game's benefit. 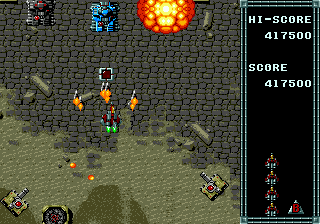 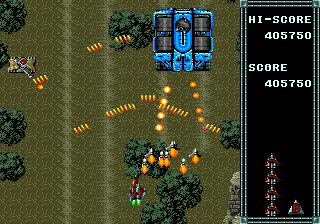 But the thing is, even if this is a "good" version of Raiden, it isn't really that great. Graphically, you'll notice a lot of blandness. As the screen scrolls vertically, brown ground will be ubiquitous in many stages and if you're not staring at that, you'll likely be seeing blue water, black space or gray bases. While there is a science-fiction element to this game, it's a bit more grounded in reality than most of its ilk, with planes and tanks providing a lot of your opposition. There are only two types of weapon upgrades, as well as two types of missile, so you can't count on having a diverse allotment of weaponry for your choosing pleasure. The action isn't bad, but the game is just there.

Those weapons and missiles can be powered up a few times, so there is a sense of progression -- as long as you can stay alive, that is! One weapon is a spread shot that gradually grows until you can cover virtually the entire screen with red bullets, while the other turns from a tiny, little laser to a burst of concentrated blue fire as wide as your ship. Missiles can either shoot straight in front of you or home in on enemies, and as you collect those icons, they'll become more deadly. With such a small choice in weaponry, it probably won't take long for you to figure out what works best for you, which is definitely me damning this game with faint praise.

To be legitimately complementary, Raiden Trad does have a few nice touches. When you destroy tanks and other ground-based foes, they'll leave a mark on the ground as opposed to simply vanishing. The first level, which takes place over a farming community, is littered with tiny cows in a rare example of the game going that extra step to add detail to its levels. And if you're skilled or lucky enough to actually beat this game, stick around after the credits. You'll then be taken to a super-difficult bonus stage culminating in you fighting what I presume is one of the Crystal aliens that serve as the main villains of the series. 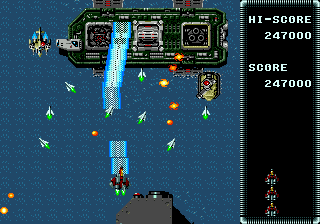 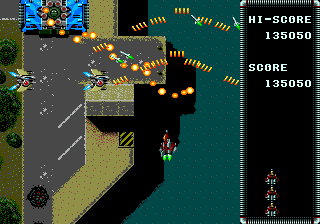 It's just a matter of whether you'll be motivated to get that far. As I said, this isn't the prettiest or most diverse game. It says a lot when a game takes players from Earth to outer space and my notes essentially read "same ol', same ol'" in regards to how things felt. Assuming you can stay alive long enough to fully power up your ship, you'll notice a general theme where the levels aren't super-tough, but bosses and mid-bosses are pure hell to overcome. The average plane or tanks isn't very durable, so by having the spread attack, you can cover the screen with your offense and wipe most everything out before it's had the chance to fire more than one bullet. Keep moving and keep tapping the fire button until your finger turns to a mass of throbbing pain you want amputated and you'll probably be okay.

Replace the cannon fodder with boss-level stuff and it's a whole new story, as things turn bullet-hell in a hurry when those foes flood the screen with their attacks. And it's rare they're coming from only one source. The first boss is a pair of big tanks and things just progress from there. In the middle of the fourth stage, you'll go up against another really tough tank and if you don't destroy it pretty quickly, it will be joined by its twin to make it brutally difficult to stay alive. The boss of the fifth stage has three separate parts that all can cause you griefand after you damage it enough, it'll send out two mobile pods to add to your misery. And don't even get me started on the utterly cruel bullet patterns the final boss emits. In many games, I'd advise you to stockpile your bombs for these moments, but that isn't even a truly effective counterstrike. There's enough of a delay between when you hit the button and when the bomb goes off that whatever attack was threatening to kill you likely will have done so by the time you see the explosion.

Raiden Trad isn't a horrible game, but I didn't find it to be much fun. The levels were kind of drab and tedious, while the bosses were tough in a way that doesn't particularly resonate with me, leading to frustration when my progress would stall while I tried to find a way to weave my one-hit-wonder through a never-ending stream of bullets with questionable success. This game was passable, I guess, but it was hard to get excited about it because I've played shooters that handle most every element with more proficiency.
2.5/5

If you enjoyed this Raiden Trad review, you're encouraged to discuss it with the author and with other members of the site's community. If you don't already have an HonestGamers account, you can sign up for one in a snap. Thank you for reading!

© 1998-2021 HonestGamers
None of the material contained within this site may be reproduced in any conceivable fashion without permission from the author(s) of said material. This site is not sponsored or endorsed by Nintendo, Sega, Sony, Microsoft, or any other such party. Raiden Trad is a registered trademark of its copyright holder. This site makes no claim to Raiden Trad, its characters, screenshots, artwork, music, or any intellectual property contained within. Opinions expressed on this site do not necessarily represent the opinion of site staff or sponsors. Staff and freelance reviews are typically written based on time spent with a retail review copy or review key for the game that is provided by its publisher.