Welcome to A Remedy For What Ails You, a five-part retrospective on one of my favourite developers. That developer is Remedy, and after what should have been five months, weve finally reached the end, with Control. Released in 2019 to moderate fanfare, I believe that Control represents a fascinating entry in Remedys catalogue. In fact, so intrigued was I, that it spurred me to make a five-part retrospective on Remedy Games. Oh yeah, baby, this one's WEIRD.

Before I even start delving into the nitty-gritty, one overwhelming thought about Control has been rattling around in my head since I first picked it up. Control isnt just a Remedy game: its THE Remedy game. No prior game Ive reviewed has leaned so heavily into all of Remedys odd little quirks. From the American setting and third-person camera, to the shooting mechanics, platforming, weird story elements, and Poets of the Fall; its all here. Its almost a celebration of everything theyve done before, even going as far as to cast voices from all previous Remedy games. Its my favourite of the bunch, but its clear that so many games before it had to walk, so that Control could run. And boy does it run. Specifically, it runs at a decent framerate on PS4 Pro, and (from what I understand) runs far better on PC than Quantum Break ever did. It also flies on Xbox Series X. As a more literal interpretation, you will definitely be running in this game, and youll feel as nimble as a flea while doing so. Unlike in prior Remedy titles, your character - Jesse Faden - runs around at a lively pace, turns on a fivepence, and jumps like a flea. Even at the start of the game, before anything crazy happens, Control makes sure you know that Jesse is a dream to control. Its just a good thing that it does, too, because once the game proper starts, that agility will serve you well. 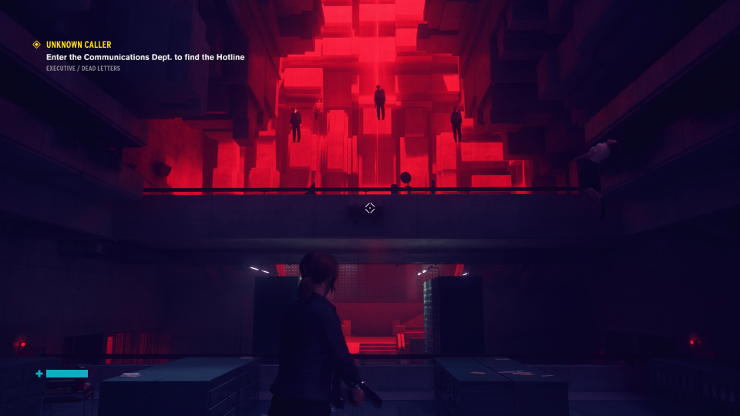 Unlike later in the game, where things get positively topsy-turvy, the game starts out fairly normal. A woman in a bitchin leather jacket and red hair combo rocks up at The Oldest House to start a job as a janitor, guided by the silent, ominous voice in her head. From here we meet a strange Finnish janitor, and are tasked to clean up the office of the Director, who just shot himself with a gun which may or may not be Excalibur. The voice in Jesses head instructs her to pick up the gun, and Jesse finds herself in the astral plane: a white void, where a huge inverted black pyramid speaks garbled instructions to her. Is your head hurting yet? Good. Distilled to its core, Control revolves around the idea that if enough people believe something exists, or behaves a certain way, then that thing can form a connection to the astral plane and will begin to exhibit strange characteristics. The Oldest House, then, is one huge instance of this phenomenon, in which the Federal Bureau of Control have set up a base. Their sole responsibility is to protect the population from all manner of spookums, and things that go bump in the night. Or, rather, go bump in the night because people expect them to.

This philosophy influences the environment design, too. Because The Oldest House is itself an altered world event - the bureaus phrase for sustained weirdness on a large scale - the building systematically rejects anything newer than about 1982. This means that throughout the game, youll be bumping into ancient computers and terminals, seeing networks of pneumatic tubes everywhere, and marvelling at the greatest amount of brutalist architecture in a videogame ever. You will learn to love the concrete. And when youre not marvelling at huge, stark blocks of humanitys ugliest material, youll be engaging in some truly excellent combat. Also talking to plants.

Amongst the baseline weirdness of the Bureaus daily grind, something has gone spectacularly awry. Hapless interns are floating in the air, chanting an endless message, the building is in lockdown, and an unknown force - dubbed The Hiss - is controlling Bureau staff and hunting you down. This is where that agility I mentioned comes into play. While Jesse can take a fair amount of damage, the speed of your movement is as critical to your survival as the weapon in your hand, and the upgrades youre using. Its a great balance, and one that remains even into late game, where youll be routinely tearing lumps of concrete from the ground as a shield. Dashing, using the shield, levitating and switching out weapon forms on the fly is as important to your survival as hurling computers at foes with telekinesis and nailing headshots, and knowing when to pick up health from fallen enemies. On top of that, Control hands in some of the best shooting mechanics of a game Ive yet played.

Niftily side-stepping the implausibly large arsenal issue some similar games have, Control has your gun physically change form in your hand, allowing you to go from reliable pistol to rocket launcher in a snap. You can have any two of five forms equipped at once, and cycle through them with square/X. You can also pick up mods for them, which alter things like rate of fire, headshot damage, target grouping and so on. This, coupled with your powers (which are also upgradeable), facilitates truly versatile combat. As a cherry on top, Control also uses a truly impressive amount of environment destruction physics, meaning that most cover doesnt stay good for long, and when the dust has settled, it really does look like a superhero just threw down in that room. Its a small detail, but Im a SUCKER for destruction. 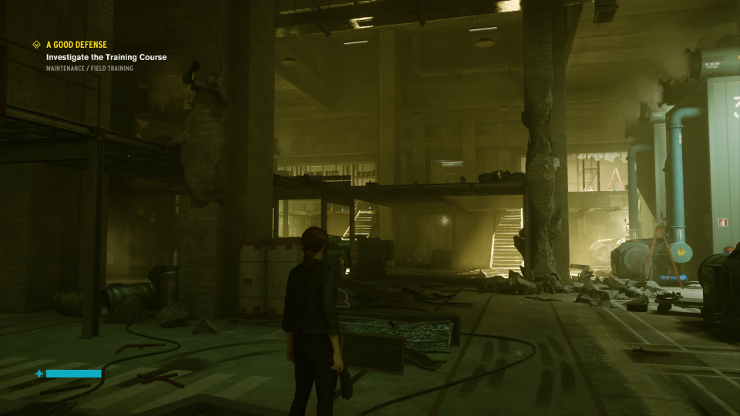 Finally, for as much love as I have for the nuts and bolts here, I have to give it to the developers for creating some of the best setpieces Ive ever played. From strange boss fights to trippy hallucinations and the unspeakably awesome Ashtray Maze, when Control decides to give you a big moment, it does it in style.

For as much as I loved my time with Control, though, I came across a few little issues. Mostly inconsequential things, and all of which were by design, but issues nonetheless.

The biggest issue I had was the slightly wonky levelling system the game uses. At some point during Controls development, Remedy accidentally created an Immersive Sim. Mostly, this all works out fine, but when you start introducing things like healthbars, damage multipliers and loot drops, youve got to keep all those numbers in check. In this case, its never clear how and why enemies level up. Upgrades to Jesse and the Service Weapon make you more powerful, but you yourself never get a level. Theres a security clearance you can get through the game, but that allows you to explore, and never explicitly has anything to do with your overall level, or your enemies. Its a little confusing, and meeting enemies that are arbitrarily more powerful does put a damper on the fun at times.

After that, my most grievous complaint specifically concerns the graphics on the PS4 and Xbox One versions of the game. Due to EGS exclusivity, I was unable to play on PC, and so opted to pick up a used copy for PS4 Pro. How bad could it be? I thought. Utterly gross, as it turns out. While I dont have an original PS4 to test on, nor did I purchase an xbox copy, I can safely say that the PS4 pro version exhibits some of the most distracting and often downright unsettling artefacts Ive ever seen. From what I endured, it seems that the PS4 Pro version is upscaling from a resolution of 1080P or less, and using some downright brutal reconstruction techniques to fill in the gaps. This results in massive occlusion artefacts, rough surfaces like metal doors having a constant shimmering, swimming effect, and so much ghosting that I had to make a call. All this is to keep the game at a stable framerate, mind, but when I tried to run it at 1080P, I got the same artefacts. As such, I just cant recommend buying this for any last generation console.

Thankfully, after picking up the Ultimate edition on Xbox Series X, I can confirm that all of these issues are resolved, with optional performance and graphics modes, which make the game run either substantially better, or look as stunning as it always should have. Personally, I chose the graphics option, because seeing all the sexy reflections around the Oldest House makes any other option look dull and lifeless by comparison. I cant believe I accepted that look before. Naturally, the new-gen consoles also turn previously cumbersome loading screens into a breeze, even going so far as to totally delete one of them in the panopticon, so its smiles all round on Series X. 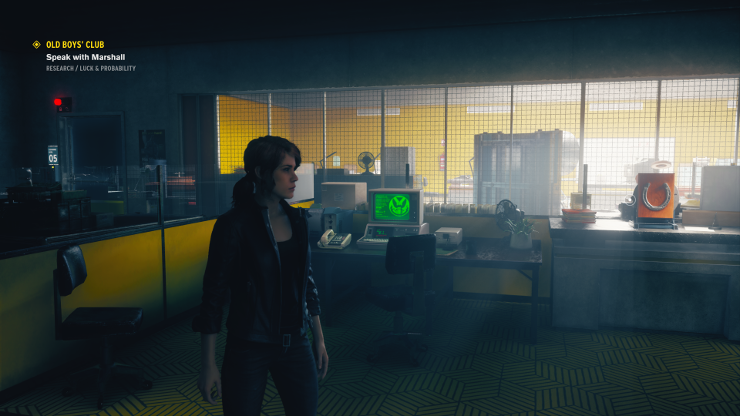 Finally, theres a smattering of minor annoyances. First is that the control points scattered around the Oldest House, which allow you to heal and fast travel, also sometimes respawn the Hiss forces. This means that occasionally, youll have to deal with The Hiss on your way to somewhere youve just been to, or to somewhere just a short stroll away. Another annoyance I had was that while menu-diving is mandatory to properly manage mods for the Service Weapon, the fact that you can only have two forms equipped at any given time can be frustrating. In most combat situations, a good balance between versatile short range and powerful longer range forms means this is never an issue, but it does mean that sometimes I ran into an encounter with an unsuitable loadout. Bottom of the pile is that the Spin form - which turns the Service Weapon into a tiny minigun - does pathetic damage. Ive seen other players use it to devastating effect, but I found the default pistol form or shotgun form to be more useful in most cases.

Well, thanks to the apocalypse, this review ended up coming out super late, but I think that now weve finally got a console version of Control thats up to snuff, I can finally give this game a full passing grade. Its clear that even on the poor old consoles, Control has a lot to offer: from a sprawling and immersive setting, to fun combat and deep kookiness, theres an overwhelming amount to love here. Its just a shame a lot of people are going to be playing a version with deeply compromised graphics and performance, and that EGS afflicted the PC release.

Now, if youll excuse me, I have a load of physics objects to destroy.

If you enjoyed this Control: Ultimate Edition review, you're encouraged to discuss it with the author and with other members of the site's community. If you don't already have an HonestGamers account, you can sign up for one in a snap. Thank you for reading!

© 1998 - 2022 HonestGamers
None of the material contained within this site may be reproduced in any conceivable fashion without permission from the author(s) of said material. This site is not sponsored or endorsed by Nintendo, Sega, Sony, Microsoft, or any other such party. Control: Ultimate Edition is a registered trademark of its copyright holder. This site makes no claim to Control: Ultimate Edition, its characters, screenshots, artwork, music, or any intellectual property contained within. Opinions expressed on this site do not necessarily represent the opinion of site staff or sponsors. Staff and freelance reviews are typically written based on time spent with a retail review copy or review key for the game that is provided by its publisher.