Monster Jam: Steel Titans 2 isn't broken in the traditional sense of the word. It's a racing game and when you press the button to accelerate, your vehicle usually moves forward. When you steer left or right, you'll probably veer in that direction, as long as you're on even terrain. When you instruct your truck to brake or back up, it sort of will. So the game works on that level, with the buttons more or less doing what they should. But in nearly every other sense that matters to me personally, the game feels busted.

I hadn't played a monster truck racing game in a long, long time, even though I liked Bigfoot on the NES more than anyone else I've ever met. I enjoyed the thrill of crushing junked cars under ludicrously over-sized wheels. I liked tearing up virtual grassy hillsides as I churned soil and my engine screamed. I liked imagining the appreciative roar of the crowd. I've never been to an event or followed the career progress of the leading drivers and their vehicles, but there's a certain appeal. 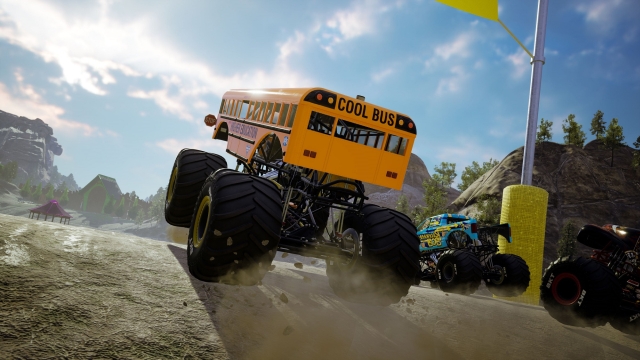 After years of ignoring the games, I decided it was time to try another one. Monster Jam: Steel Titans 2, which was developed by the generally celebrated team at Rainbow Studios, seemed like a safe bet. I'm just glad I didn't place money at a Vegas craps table.

After a borderline insulting tutorial that enthusiastically congratulates players for figuring out how to press a single button, the game deposits your truck in a valley decorated by shacks, trees and picnic tables. It's not particularly awe-inspiring, but it gets the job done. You can explore to find points of interest, which you are typically supposed to return to while driving other trucks you might unlock by participating in events. There also are emblems to collect. If you get all of them in a particular area, you win an additional truck. Once you collect an emblem, for no reason I can see, it still shows as collectible, only now it's a different color. I have no idea why it doesn't just disappear, which would have worked better. But then, there are a lot of things about the game that might have worked better than they do.

I mentioned that the controls function reasonably well, but the same is not true of the vehicles. Sure, you can accelerate. But if you roll over a small bump or even a gentle slope, your vehicle is likely to tumble in some other direction. Your vehicle's wheels might grip earth as it flounders and send it twirling like a break dancer, or rocketing off in some undesired new direction. But maybe they won't. It's anyone's guess. Back and front tires are controlled separately with the two analog sticks by default (though you can change the control scheme), so you're supposed to right yourself and forge a path forward in the desired direction. But I found that once the truck starts rolling this way or that, I don't have much luck bringing it back in line. One time, just to see what would happen, I merely held my finger on the acceleration button for a few minutes without touching anything else. You might imagine that experiment would get me nowhere in a hurry, but the truck bounced and rolled around the hub area, scaling mountains and launching from invisible barriers, clipping through some objects and rebounding from others for no apparent reason as it crisscrossed much of the level hub. Things hadn't gone considerably better for me when I actually tried cruising with a purpose. On some level, I get that I need to just plain ignore which way my truck is facing and entirely focus on the wheels, but knowing that never allowed me to get to a point where I could consistently do it. 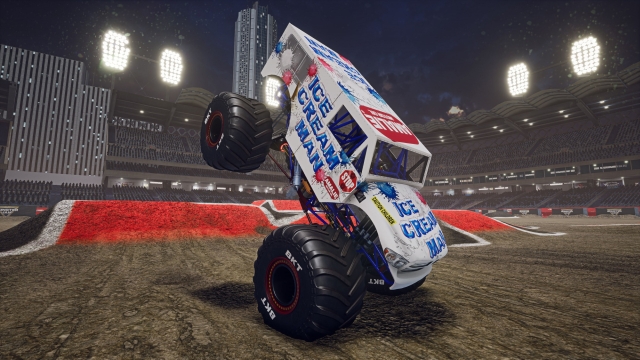 As you can imagine, I didn't find such a setup endearing in the hub world. And I certainly didn't care for it when I finally attempted to win some of the multi-round competitions. You need to finish third or better overall across multiple events to unlock additional vehicles. Completing enough "chapters" expands the hub world a little bit at a time, or lets you travel to a new one, as the case may be. But the events are... not fun. In some of them, you have to race toward a series of awkward slopes and then start tricking off them by rolling and tumbling this way or that, but that only works if you tumble properly. You might not, and then you get no points because your combo stalls. Then again, you might tumble beautifully and rack up a lot of points. But like I said, you also might not. So there's that.

Other events include a racing derby, where half the vehicles go around the track in one direction while the other half speed off in the opposite direction. Usually, the two groups manage to intersect on a hillside, where you can't see them coming and will crash into them and probably go tumbling. There's no adjusting the camera (though you can press the d-pad on the Pro Controller for a quick and unfortunately disorienting glimpse in the desired direction), so you just have to hope for the best and watch the mini-map. But it doesn't do a good job of showing which direction you must drive in a winding course, and the on-course markings are faded until you get near. Then you are already veering off course unexpectedly and losing time as you are returned to the proper track.

Monster truck racing is supposed to feel empowering on some level. As I played Monster Jam: Steel Titans 2, I all too often felt like I was being toyed with by a cruel deity. It didn't matter what I told the truck to do, which direction I turned wheels or whether I accelerated or braked. Other things kept happening. My most effective approach was to go through events on the "Easy" difficulty setting, driving slowly to just barely stay ahead of my boisterous but inept competition. Driving at a higher rate of speed was a surefire way to fail spectacularly. 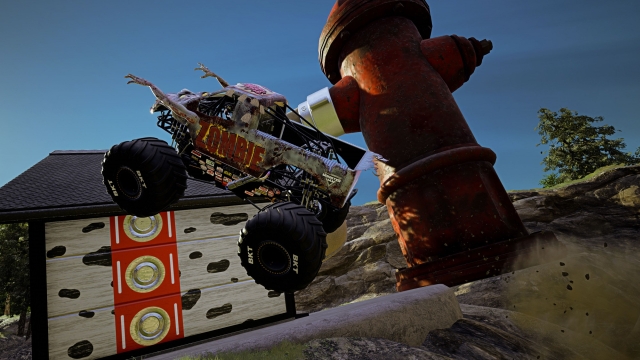 My gripes beyond those directly related to the physics seem petty in comparison. On Nintendo Switch, the version I played, the load times feel excessive given the underwhelming assets that eventually load. When you appear in a stage, textures slowly pop into place on rooftops or walls or vehicles. Draw distance is iffy and shadows suddenly appear under trees you approach, which prevents environments from feeling particularly convincing. One thing I did like was that my movement seems to actually impact the terrain's appearance. I saw a lot of furrows in soils left by my wheels, reminders of where I had tried--and failed--to drive in a straight line for more than a few in-game yards.

Progression feels mostly meaningless, and not just because of the mostly lifeless hub areas. Snagging new trucks is neat, but then you have to level them up by driving them a lot and entering them in events. There's no way I could find to direct how the trucks evolve as you level them up, and the main performance difference I saw is speed. That doesn't mean much in a game where you need to race slowly. The vehicles all bounce around a lot no matter what, and take a lot of damage, even though that damage is purely cosmetic. Or if taking damage actually affects physics, it doesn't do so in any meaningful way.

There are numerous ways to play the game, at least, besides all by one's lonesome. You can head online to irritate strangers, or play locally in split-screen or wireless mode across multiple events. I couldn't begin to guess how many people will still be playing online even a few months from now. Maybe a lot of them, and maybe not.

When I started playing Monster Jam: Steel Titans 2, I imagined all the fun I would have driving around arenas and crushing cars, or racing other trucks through the wilderness, or performing sweet tricks and customizing my rides. I figured a good time was all but assured. And although the game did let me check off a lot of the expected boxes, it somehow managed to avoid making the experience enjoyable. I can't remember another entertainment product that has disappointed me this much in a good long while.
1/5

If you enjoyed this Monster Jam: Steel Titans 2 review, you're encouraged to discuss it with the author and with other members of the site's community. If you don't already have an HonestGamers account, you can sign up for one in a snap. Thank you for reading!

© 1998-2021 HonestGamers
None of the material contained within this site may be reproduced in any conceivable fashion without permission from the author(s) of said material. This site is not sponsored or endorsed by Nintendo, Sega, Sony, Microsoft, or any other such party. Monster Jam: Steel Titans 2 is a registered trademark of its copyright holder. This site makes no claim to Monster Jam: Steel Titans 2, its characters, screenshots, artwork, music, or any intellectual property contained within. Opinions expressed on this site do not necessarily represent the opinion of site staff or sponsors. Staff and freelance reviews are typically written based on time spent with a retail review copy or review key for the game that is provided by its publisher.