Ratchet & Clank, a 2016 release for PlayStation 4, is unusual as reboots go. It's based not only on the original PlayStation 2 game of the same name, but on a movie too. The film and the remade game were actually developed in tandem and their release was timed for maximum cross-promotion. That whole setup seems like it ought to have spelled disaster for all involved. Somehow, though, it did not.

Perhaps the biggest compliment I can pay Ratchet & Clank is to say that if I hadn't already heard it was tied to a film before I started playing, I wouldn't likely have guessed it. The game feels great and features those elements I most enjoyed about Ratchet & Clank Future: A Crack in Time on PlayStation 3. There are some absolutely beautiful environments, populated by gorgeously rendered, expressive characters. There also are numerous weapons to equip, and a variety of action-packed sequences that feel terrific (with a tense ride on a train standing out for me in particular). Finally, the signature humor is definitely in place. And while the campaign doesn't last as long as one might hope, it does include enough pleasing moments that as soon as I reached the closing credits the first time, I was ready to dive into the "Challenge" mode and start another run. 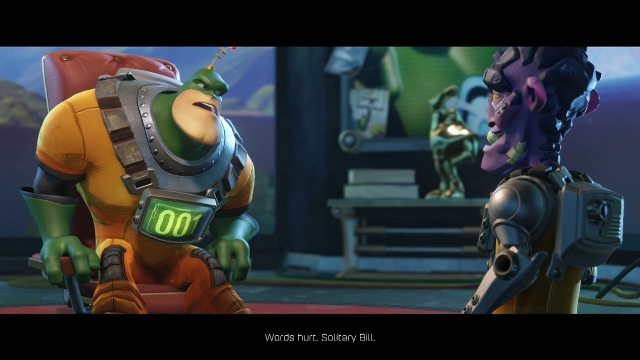 The festivities begin with a story I suppose must have borrowed scenes from the movie (which I haven't seen). Qwark, former captain of the Space Rangers, is talked into telling the sordid tale of his fall from grace. As he spins his yarn, the player meets both Ratchet and Clank, two unlikely heroes who join up almost immediately and start roaming the galaxy as they attempt to prevent evil entities from destroying everything. There are many moments that feel like they owe a lot to early "Star Wars" films.

Gameplay consists of excursions to multiple planets that manage to feel quite distinct. You can re-visit nearly every location whenever you like after clearing it the first time, a fact I was grateful for because there are dozens of the expected collectible bolts and weapon schematics. It would really stink if you couldn't grab anything by journey's end because you missed your one chance. Most of the goodies aren't hidden especially well, but a lot of them do at least require a bit of a search and some time away from the most obvious paths. 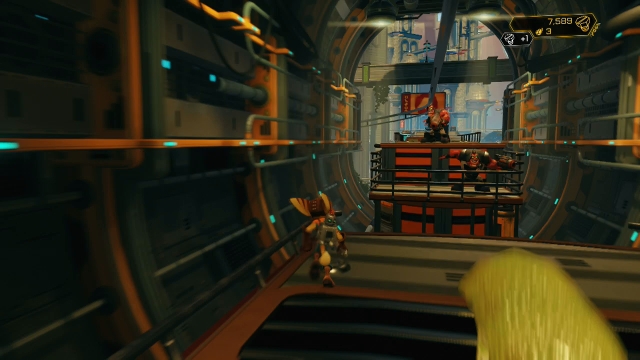 Speaking of paths, about half the the stages feel a bit on the small side. The environments are for the most part quite linear, with the opportunity for a little exploration on the side. You can make a quick run to any required scene in almost no time at all. However, the rewards for completing "optional" objectives tend to justify a closer look. A lot of times, I also found I had no choice but to visit a given planet more than once, because there would be some task I couldn't quite accomplish on my first visit due to a missing piece of equipment. Luckily, it's easy to hop from planet to planet with only a fairly brief load time. Once you have explored the furthest reaches within a given region, there's usually also a portal so you can warp back to it, or a taxi to ride.

Though you'll spend the bulk of your time running around as Ratchet while Clank stays in your backpack, the furry lombax is a likable hero with a lot of cool equipment at his disposal. He finds boots that let him run up certain walls, can grind along rails like Tony Hawk, flies a jetpack on occasion and sometimes even participates in dogfights in his jet. When the time comes to fight, he swings his over-sized wrench around like a sword, or tosses it a short distance. Of course, his main approach to enemy encounters is to use a variety of fiendishly effective guns, which do interesting things like turn foes into sheep or pixels, or cause them to start dancing like they're at a disco club. Long-time players have seen this stuff before, but if you haven't tried a Ratchet & Clank game in some time (or ever), most weapons manage to feel fresh despite really just amounting to one more way to kill the bad guys with projectile and melee weapons. 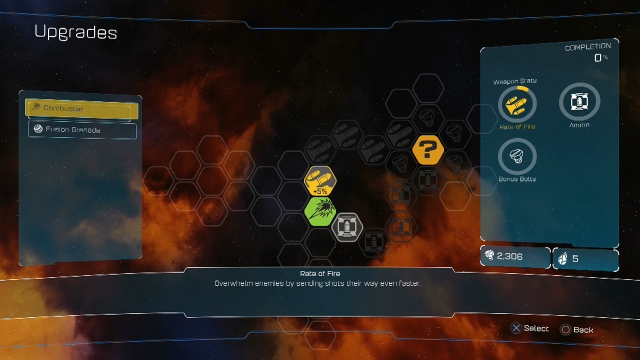 The process for upgrading those weapons is, I must say, quite addictive. You find special shards that drop from enemies or from crystal clusters secreted away within the typical stage. Those shards allow you to adjust how your equipment functions. The more you use something, the more you can tweak it. Especially in the early going, it's important to consider your play style as you choose which guns you upgrade now versus later, and whether to prioritize ammo or attack power (just for instance). Each new planet tends to mean a new weapon to buy and master, and the game's momentum doesn't give a person much chance to get bored.

For any of the hypothetical newcomers I mentioned, the experience is surprisingly friendly and limits likely frustration. There are three difficulty settings, for starters. I played a lot on Normal but ultimately found I didn't feel like I was missing anything but tedium by dropping it a notch. On the Normal setting, enemies soak up a bit more punishment than I like, which leads to some fairly extended duels until you get a chance to power up a bit. Surviving most of an extended duel with a boss, only to fall just short of victory right at the end and have to start fresh, isn't super cool. Luckily, checkpoints are frequent almost everywhere else. You can also adjust the difficulty whenever you like without having to worry about losing anything more than your progress since the last of those checkpoints. 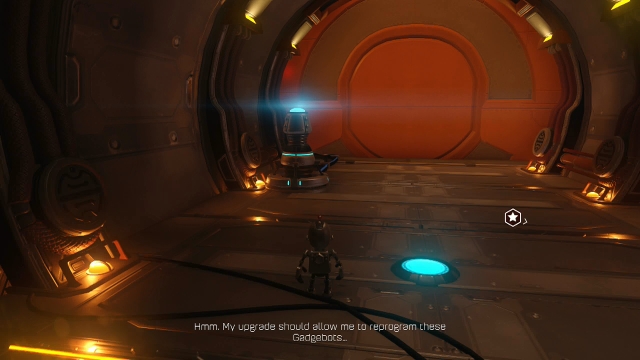 Younger players, and even impatient folks such as myself, are most likely to take issue with the sections of the game where everything slows down so the pint-sized robot Clank gets a turn to play hero. Navigating hostile areas and placing droids to bridge gaps and so forth is a break from the action that adds some variety, sure, but it's also not especially fun. I almost always found myself anxious to regain control of Ratchet. Luckily, the Clank segments are neither numerous nor lengthy enough to pose a real problem.

Once you do beat the game, which should require only a few hours of your time even when progressing at a relaxed pace, there's a special "Challenge" mode that invites you to start another run at the campaign... with a few differences. As a reward for your recent success, you can review artwork and such from older Ratchet & Clank games, depending how many gold bolts you snagged. You can also buy more powerful versions of weapons, once you've sufficiently upgraded their vanilla versions. Buying the best new weapons costs a lot of bolts, but there's a new system that lets you build multipliers as you defeat subsequent adversaries without taking damage. This setup forces more strategic play in some areas, particularly the ones absolutely riddled with villains. It's just one more smart move in a game that's full of smart moves.

Ratchet & Clank may be based on both a previous game and a movie that was also based on that game, which seems to me like an odd disconnect, but it's nowhere near the mess that sort of background might reasonably lead a person to anticipate. The series has been around for a long while. Its developers clearly know what they're doing by this point and they were ready to prove it. The result of all that experience is a pleasant romp that's perfect for gamers of nearly all ages, provided they haven't decided they're too cool for school. Me, I've never been especially cool. I don't mind admitting as much if it means I get to lead my favorite lombax on another journey through planets much neater than our own.
4/5

If you enjoyed this Ratchet & Clank review, you're encouraged to discuss it with the author and with other members of the site's community. If you don't already have an HonestGamers account, you can sign up for one in a snap. Thank you for reading!

© 1998-2021 HonestGamers
None of the material contained within this site may be reproduced in any conceivable fashion without permission from the author(s) of said material. This site is not sponsored or endorsed by Nintendo, Sega, Sony, Microsoft, or any other such party. Ratchet & Clank is a registered trademark of its copyright holder. This site makes no claim to Ratchet & Clank, its characters, screenshots, artwork, music, or any intellectual property contained within. Opinions expressed on this site do not necessarily represent the opinion of site staff or sponsors. Staff and freelance reviews are typically written based on time spent with a retail review copy or review key for the game that is provided by its publisher.