Coming up with original ideas in the world of gaming isn't the easiest thing to do, so if you're scratching your head and finding yourself bereft of great concepts, just do the next best thing and copy from a few critically acclaimed series! Darksiders, developed by Vigil Games and released by THQ early in 2010, was a pretty fun game, in large part because it wasn't shy about aping some highly-regarded stuff. Many aspects of the action will be instantly familiar to those who've spent time with the God of War games, while your protagonist will be solving puzzles to advance through dungeons bearing no small resemblance to those seen in more modern Legend of Zelda games.

The end result was a game that might not be breath-taking or a "must play" for its generation, but is capable of providing players with a reasonably fun diversion. I didn't like everything I was doing while advancing through its story, but my overall impression was positive enough to make me interested in advancing through a series currently consisting of four games.

Part of that might have to do with the setting, as I do enjoy games that play around with religious stuff to create their own "end of days" scenario. War, one of the Four Horsemen of the Apocalypse, finds himself summoned to Earth to chaos unfolding in front of him, with demons and angels fighting each other on the streets of a large city. Looks like the end of days has approached, even if the other three Horsemen apparently never heard the call. Running solo, War does what a large demi-god holding a large sword does best and starts hewing down demons. However, while this might be the Apocalypse for him, it's just the tutorial stage for us, so after doing a bit of easy battling while we're getting adjusted to the controls, War's powers get drained from him at a very inappropriate time -- when he's engaged in battle with Straga, one of Hell's largest and most powerful champions.

However, he is rescued from an untimely demise by the Charred Council: one of those "above good and evil" bodies that also happens to be the bosses of War and his fellow Horsemen. Except that might not be a good thing, as they immediately accuse War of betraying their balance and aiding Hell in overrunning Earth. In order to not be judged and immediately found guilty, War must find answers to why he was summoned and why the forces of Hell launched their invasion in order to prove his innocence. To make sure he sticks to their script, the Council decides give him a side-kick, The Watcher. Well, "side-kick" might be an exaggeration, as that being doesn't actually provide much (if any) help -- he's content to keep War in line with constant insults and threats as to his fate if another FUBAR situation occurs.

War's adventure will take him through the post-apocalyptic ruins of a once great city, as well as a few surrounding areas. He'll fight all sorts of demonic and, occasionally, angelic beings, while also exploring large dungeons where that fighting is balanced out with puzzle-solving. Early on, a powerful being, Samael, offers to help him if he delivers the hearts of some powerful demons, so he'll hunt them down in order to get closer to Straga and his boss, a mysterious devil only known as The Destroyer. While this outcast demon isn't the most trustworthy of allies, he's at least willing to throw War a bone as opposed to making snide comments, so an uneasy alliance is made. 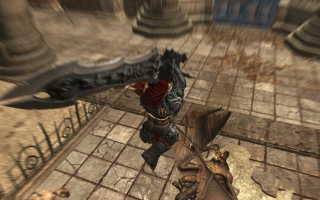 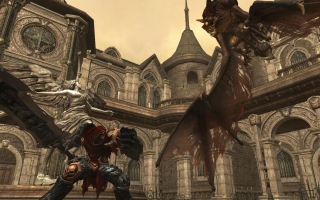 Combat is pretty simple. One button swings War's sword, while others gradually get implemented as he learns special attacks and gains new tools, which often help him to access new areas of the world. Some of those tools will feel very familiar to Zelda fans, as the Crossblade essentially works like their Boomerang, while the Abyssal Chain fulfills much the same purpose as the Hookshot. Others serve as optional weapons, such as a scythe that's good for battling groups of weaker enemies, as well as a powerful gauntlet that can also shatter certain barricades.

Even if this game wasn't fun to play, I'd have likely gotten some enjoyment simply trying to figure out all the games from which it borrowed elements. Many treasure chests are one-use replenishers for health or special attack meters, while others contain fragments that will add to your total amount if you collect enough. Killing enemies also can give you a bit of health or currency and triggering and accomplishing special "fatality" attacks will give you more. Add in the way combat and dungeon design brought back memories of God of War and Legend of Zelda and I spent a lot of time trying to figure out which series was the larger inspiration for this game. Hell, I was going through Darksiders at the same time as God of War II and found it tough to play them back-to-back due to muscle memory occasionally causing me to botch basic moves.

My only real problem with a game being derivative of others is that some ideas won't be winners. In homage to Portal, you'll eventually get the Voidwalker ability, which allows you to shoot portals onto specific surfaces in order to instantly teleport from one to the other. This would be a cool addition to the formula, except for how it gets introduced early into a late-game dungeon and then becomes the be-all, end-all fixture of that place. You'll do portal puzzles to work your way to a mini-boss, use portals to defeat it and then retrace your steps by applying the damn things to not only get yourself back, but also manipulate a beam of light so it reaches the main chamber to help release a prisoner. This massive dungeon, The Black Throne, is divided into three large areas largely revolving around this mechanic to the degree it felt like overkill long before I'd finished it. You even fight the same mini-boss in each area, with the only alterations to each confrontation revolving around portal access.

Maybe those puzzles just didn't resonate with me, but I think things would have been better if they were spaced out through the game as one of many mechanics you use throughout your quest. Instead, the vast majority are crammed into one dungeon, so you have all these "throw bombs through portals to destroy obstructions" and "push blocks through portals to weigh down platforms" tasks with little else to do. This place would have taken a while to get through simply due to its size. Having a seemingly never-ending assortment of puzzles based around a mechanic I wasn't particularly enjoying made it a real trial to endure. Note to self: Next time I'm looking for older games I never played when they were first released, do NOT snag Portal.

The worst thing was that The Black Throne was essentially the game's final dungeon. After that, you only have a short area to traverse, some padding -- I mean, a scavenger hunt throughout the world for the pieces of a sword capable of damaging The Destroyer -- and your battle with that baddie. Essentially, a game I really liked was noticeably marred by how its final hours didn't live up to the standard the rest had set. While Darksiders wasn't a particularly original game, it mainly borrowed from ones I liked or loved and, for most of its running, that was enough for me to give it a hearty recommendation, at least for fans of the games inspiring it. After completing it, I still can recommend it, but that endorsement is a fair bit more muted. Well, unless you're a huge fan of Portal and the sort of puzzles it possesses, in which case, full speed ahead!
3.5/5

If you enjoyed this Darksiders review, you're encouraged to discuss it with the author and with other members of the site's community. If you don't already have an HonestGamers account, you can sign up for one in a snap. Thank you for reading!

© 1998-2021 HonestGamers
None of the material contained within this site may be reproduced in any conceivable fashion without permission from the author(s) of said material. This site is not sponsored or endorsed by Nintendo, Sega, Sony, Microsoft, or any other such party. Darksiders is a registered trademark of its copyright holder. This site makes no claim to Darksiders, its characters, screenshots, artwork, music, or any intellectual property contained within. Opinions expressed on this site do not necessarily represent the opinion of site staff or sponsors. Staff and freelance reviews are typically written based on time spent with a retail review copy or review key for the game that is provided by its publisher.