I keep forgetting I have S.U.M. Slay Uncool Monsters installed on my Nintendo Switch, though I've now played the game numerous times in an attempt to conjure up a profound explanation for my forgetfulness. It feels like what I'm really doing is fighting to avoid making the obvious statement, which is that the game doesn't have lasting appeal.

It should have had appeal to spare, if not for a general audience than at least for me. As the title sort of suggests, S.U.M. is an educational game designed to help players brush up on their math skills. It's the 2020 equivalent of something like the Little Professor calculator toy my parents bought me when I was in elementary school. I wore that thing out, constantly testing myself to see how quickly I could solve basic and eventually somewhat more advanced math problems. And when I say I "wore it out," I mean that literally. The keys eventually stopped working and the numbers began to fade on the face of the device. 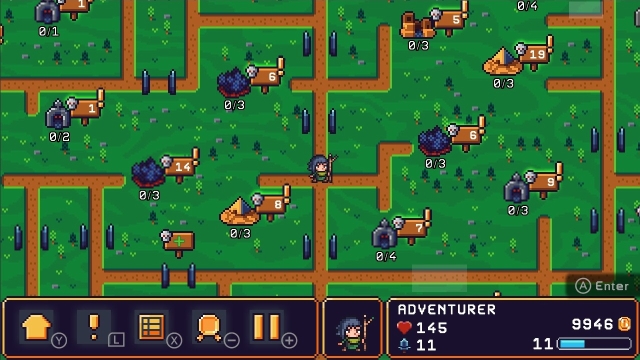 So yeah, I like math of the sort featured in S.U.M., which is your basic assortment of addition, subtraction, multiplication and division problems. That's not really the issue. I've actually played and even enjoyed numerous math games over the years, including the Wild West Math and Sticky Bear franchises at one of the elementary schools I attended. A big problem with this newest Switch game is that the world has moved on and stuff that worked at one point no longer does. A much bigger problem is that the game gets boring in a hurry.

Its setup showed promise. Unless you waste time with the Practice mode, the basic idea is that you're wandering the land, heroically slaying monsters and solving various math problems to earn gold enough to unlock additional gates so you can access still more of the map and test yourself with more advanced equations. Dungeons consist of a series of math problems, divided by general type, which you must solve quickly to avoid taking damage at the hands of various nasties as you slowly level up your character, RPG-style.

So, what's the problem? There are a few of them, actually. For one, the cost to open gates is high enough that you have to raid the same few dungeons repeatedly and it feels like progress has stalled. A typical gate requires you make four or five runs, and the number required may climb if you suck at math and have to keep wasting gold resting at the inn (though I didn't have that particular issue myself). If you clear a dungeon perfectly, you get more gold than if you answer a few equations wrong. 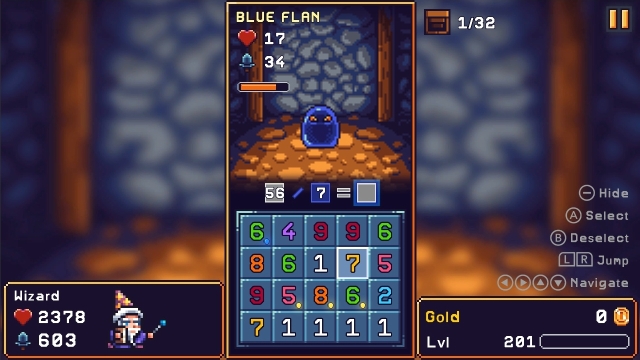 A surprisingly significant issue with the game is that the cursor feels slow. You have a grid 5 numerals wide by 4 numerals high. To complete an equation, you select numbers from that grid. For instance, the equation might read something like "5 - ? = 1." You would then need to find a 4. Sometimes, there will be several of the desired digit to choose from and life is beautiful. Sometimes, there will be only one instance. In the early going, this isn't a big issue. But later on, you have considerably less time to input the correct answer, and you might not even see the 4 at first. Then when you do, your cursor may start out in the opposite corner of the grid, so you have to quickly cross it using either the analog stick or d-pad. It takes some time. I played for several hours before realizing that you can press the L or R button to hop back and forth between the far left and right sides of the grid, which works reasonably well, but why can't I just tap "left" while on the far left side to wrap back around to the right side? That's the more intuitive approach taken in games dating back to the NES, and I would have preferred it.

As the math problems grow trickier and the timer starts ticking down more swiftly, cursor fatigue feels like a bigger issue. "Get good," someone might tell me at this point, but I assure you: when it comes to simple math problems like these, my math is on point. I'm faster than most people I've met. That used to be a parlor trick of sorts for me. Fellow students would pose a math problem and then try to determine the answer faster using their calculator than I could with my mental math. I typically won, but I still struggled to find dates to dances. Life isn't always fair.

As the campaign progresses, the problems you must solve grow more difficult. Division and multiplication challenges arrive in an unpredictable order, so that sometimes you're solving for the quotient and sometimes you need to figure out what number to plug into the equation to arrive at the answer. In some cases, you might also face a problem like "? - ? = -2" and you have to figure out what would add up to the "-2," except the first few solutions that spring to mind require digits that aren't even on the grid and then you've taken damage. Finally you spot numbers that will do the trick, but they're far enough apart that you take more damage still while selecting them. And there are 32 problems in the dungeon, and you just took 2 or 3 hits that wiped out 120 of your available 300 HP on just the one problem... 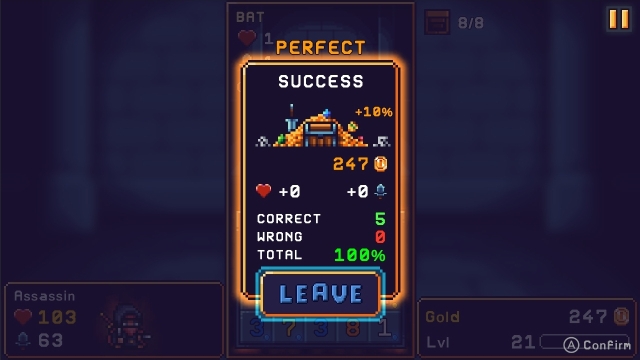 So no, I can't say that I particularly enjoy the process of entering answers in the game, even though I often have the answer in mind within fractions of a second. And the "dungeons" get longer and longer, meaning you have to input more answers without making a mistake or moving too slowly. Technically, that means the later dungeons are indeed more difficult, but they're also very repetitive and the problems you have to solve aren't substantially harder. Then your reward is that occasionally a little bit more of the map becomes available and you can access slightly more tedious dungeons that you must clear several times.

There is a leveling system, as I mentioned, but it doesn't really seem to make much of a difference. There are character classes, as well, and there are in-game achievements. But accessing most of that stuff requires you to clear dozens of dungeons even when you're doing everything perfectly, and none of it changes how the game functions. This feels like a game that is best played a little bit at a time, day after day, as part of an academic routine over the course of weeks or months, rather than as a source of quick entertainment on a rainy afternoon. But without a sense of meaningful progression, why would most kids (or adults) look forward to coming back to it?

I keep forgetting I have S.U.M. Slay Uncool Monsters installed on my Nintendo Switch, and that's true even though I've spent several hours exploring the campaign and practice modes. Now that I've sorted through my thoughts and shared them in this review, maybe I can take a vacation from using elementary math to slay monsters. I feel like I've earned one.
2/5

If you enjoyed this S.U.M.: Slay Uncool Monsters review, you're encouraged to discuss it with the author and with other members of the site's community. If you don't already have an HonestGamers account, you can sign up for one in a snap. Thank you for reading!

© 1998-2021 HonestGamers
None of the material contained within this site may be reproduced in any conceivable fashion without permission from the author(s) of said material. This site is not sponsored or endorsed by Nintendo, Sega, Sony, Microsoft, or any other such party. S.U.M.: Slay Uncool Monsters is a registered trademark of its copyright holder. This site makes no claim to S.U.M.: Slay Uncool Monsters, its characters, screenshots, artwork, music, or any intellectual property contained within. Opinions expressed on this site do not necessarily represent the opinion of site staff or sponsors. Staff and freelance reviews are typically written based on time spent with a retail review copy or review key for the game that is provided by its publisher.