While From Software's action RPGs such as Dark Souls and Bloodborne might be too difficult to be accessible to everyone, they're too popular and highly-regarded for me to ever refer to them as "niche". That's a term best used to describe a number of the games made over recent years that owe at least part of their existence to the presence of From.

Such as Clever Beans' Gods Will Fall. While I can appreciate a lot of what the developers were trying to do, I often found the game frustrating for the wrong reasons. It's a short experience, made longer because luck is almost as important as skill when it comes to traveling through 10 realms to slay the gods residing within them.

The plot is simple: the gods of this game's Celtic-inspired world really suck, demanding everything from their worshipers while only bestowing misery upon them in return. To set things right, every capable warrior in the world banded together and embarked on a nautical journey toward an island hosting the entrances to the divine realms. That army soon learned it's a bad idea to use breakable things like boats to launch an invasion, as the gods utterly destroyed their fleet. Only eight warriors lived to wash up on shore. Now, you'll control the survivors, going to each realm and picking a warrior to challenge it while the others wait outside. 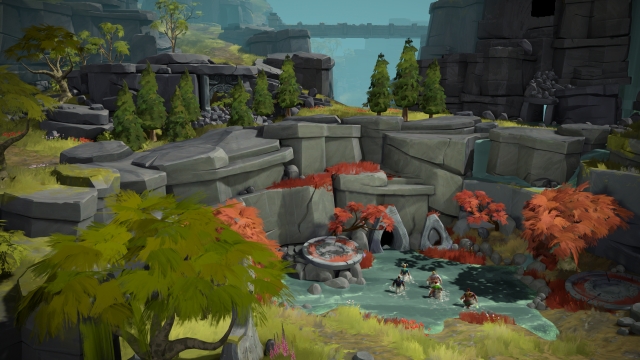 If a warrior succeeds, he or she comes back with new weaponry, while many members of the team gain stat boosts to prepare them for journeys into other realms. If the chosen champion fails, they'll usually become trapped in the realm and you'll be down one fighter until you've beaten that realm and rescued your comrade. Unless they're killed by special, lethal attacks. In that case, they're gone for good. The game continues until you've either killed all of the gods or all eight of your characters are dead or trapped.

While each realm looks different, with locales ranging from a swamp to a bone-covered beach to an otherworldly temple-like place, they play the same way. Your character appears and you start walking through the place, killing enemies and progressing toward the god's lair. Occasionally, you find scrolls to read for tips or lore, or items you can use to help the cause, but you're mostly just walking and fighting. Depending on which character you choose, you might wield any number of weapons. Smaller characters get twin maces or swords or spears. They move a bit more quickly, but tend not to be overly durable. Larger characters are more robust but slower. Their massive two-handed weaponry illustrates that point.

When fighting, you have a limited number of options beyond the typical light and heavy attacks. Much like in a From game, parrying plays a significant role. Since this game employs an overhead isometric point of view and doesn't have the cutting-edge graphics those other games possess, the average enemy's "tell" is for a light to sparkle on them before they strike. Time your parry right and you briefly stun them, allowing for a counterattack. Knock an enemy down and you can devastate them by jumping and heavy attacking while in the air. And the game offers its own way to heal, assuming you aren't lucky enough to find items to do the job more quickly. If you lose a few life bars, your attacks start to refill them. Upon filling one or more, you're able to perform a battle roar that restores that health. And when you fill enough bars in that fashion, you also get a temporary buff. 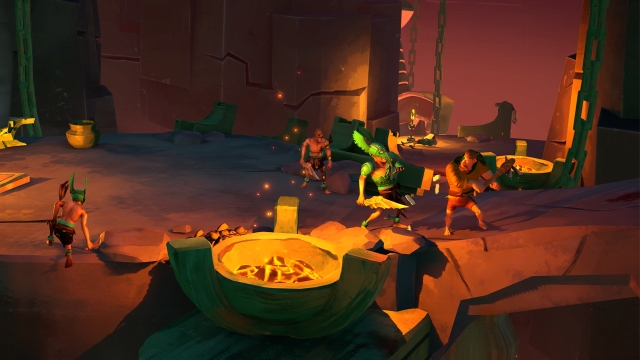 In theory, most enemies are pretty easy to figure out, leaving bosses to provide the main challenge. They're a diverse lot, ranging from giant insects to grotesque ogres that use their over-sized tongues as whips. One is even a virtually helpless serpent-like creature whose only hope resides in two powerful guardians. One neat thing is that the gods require worshipers to maintain their power. By killing all the basic enemies within a realm, you're able to chop off a decent sized chunk of their leader's health. This provides you with a dilemma. By avoiding conflict, you might reach a boss with full health, only to discover it can absorb an amazing number of attacks before falling. On the other hand, while trying to kill everything might have a detrimental effect on your character's health, your efforts could ensure the boss has lost about a third or its life meter before you even challenge it.

If we leave things right there, this is a pretty fun game, if a bit short. These realms aren't particularly gigantic, so a person could conceivably clear everything in a couple of hours. But things were not left right there. Despite being named Gods Will Fall, the game worships at the shrine of one being: the Random Number God.

First, every time you start up a game, your eight warriors are randomly generated. This can lead to issues if you're like me and find some weapons vastly superior to others. Spears are great because unless an enemy also has a long-range attack, you can just stand and use the heavy attack to stab them from a distance. This approach allowed me to experience my initial successes. As I played longer, I found that swords are also nice due to how quickly you can swing them. Dodging an attack, running in and whacking an enemy until it's dead is a viable strategy on most basic enemies. I also had a degree of comfort with the big, durable folks and their two-handed weapons. The heavy attacks were too slow to be useful, but light ones could carry me through a realm and, at least with these guys, a few seconds of bad timing won't put them down for the count.

That's assuming the game is kind enough to allow me to find the right place to tackle. With each new attempt, the difficulty of the 10 realms is randomized. If you decide to start your adventure in the realm of Boadannu -- one of those located near your starting point -- you might find that god to have a small life bar and be guarded by sparsely-placed weaklings. Start up a second quest and that boss may have at least twice as much health and a more imposing collection of lackeys. You won't know until you've entered a realm. Once you have, you can't leave until you've either killed the boss or lost your warrior. 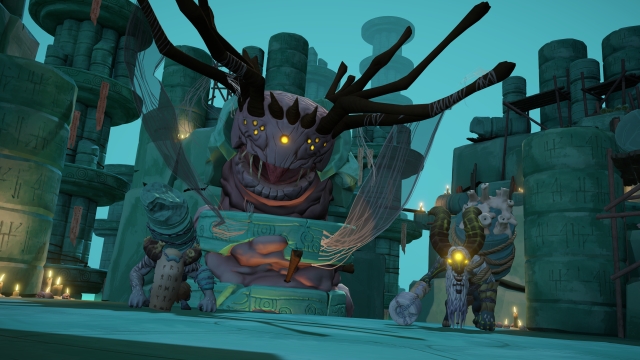 This can be annoying. When I felt I was getting the hang of things, I beat two of the first three realms I visited, with the lone failure being one that was too tough for my party at that time. After that setback, my success faded quickly, but my diminishing fortunes had more to do with me needing to learn how best to tackle bosses than anything else. After losing all of my warriors, I felt a bit pumped up by my small measure of success and went back in expecting to do even better. And wound up killing no gods at all. I lost a few guys just trying to find a realm that wasn't really tough, and when I finally found one I could advance through without much trouble, I got taken to school by a boss I hadn't encountered previously because this was the first time that particular realm had been a suitable starting point for my quest.

Such randomness extends to many of the game's facets. Sometimes, one of your characters will have a history with a particular god. While that can lead to them getting a stat boost in their realm, I found it more likely that I'd get a message stating they were terrified and would be far less effective there than anywhere else. Each time you play, you'll likely discover that at least one of your characters has a bond with another. If their pal gets taken, they'll be determined to rescue them. As a result, they'll be stronger in that realm, but weaker everywhere else if you decide throwing bodies at that god isn't the best of ideas. Hell, even doing well with a character can be bad. In that first good run I had, it was the same spear-wielder who got both of my kills. After the second god fell, I got a message that the hero had been battered and bruised by tough battles, leading to her suffering diminished stats for quite some time.

While Gods Will Fall isn't a bad game, I found it to be a bit too "niche" for me due to the large role dumb luck plays, at least until you've gotten so good that you can overcome the Random Number God's regular attempts to thwart your endeavors. The challenging nature of From's games inspired me to get better so I could progress farther into them. Here, not having any idea how tough realms would be until I'd crossed the line of no return, or if characters would be weakened on the computer's whim, sapped my enjoyment of the game a good bit. With the quest not being overly long, I can understand why Clever Beans did things this way. But this was ultimately a case where understanding those design decisions didn't lead to increased personal enjoyment as I dealt with the fallout.
3/5

If you enjoyed this Gods Will Fall review, you're encouraged to discuss it with the author and with other members of the site's community. If you don't already have an HonestGamers account, you can sign up for one in a snap. Thank you for reading!

© 1998-2021 HonestGamers
None of the material contained within this site may be reproduced in any conceivable fashion without permission from the author(s) of said material. This site is not sponsored or endorsed by Nintendo, Sega, Sony, Microsoft, or any other such party. Gods Will Fall is a registered trademark of its copyright holder. This site makes no claim to Gods Will Fall, its characters, screenshots, artwork, music, or any intellectual property contained within. Opinions expressed on this site do not necessarily represent the opinion of site staff or sponsors. Staff and freelance reviews are typically written based on time spent with a retail review copy or review key for the game that is provided by its publisher.