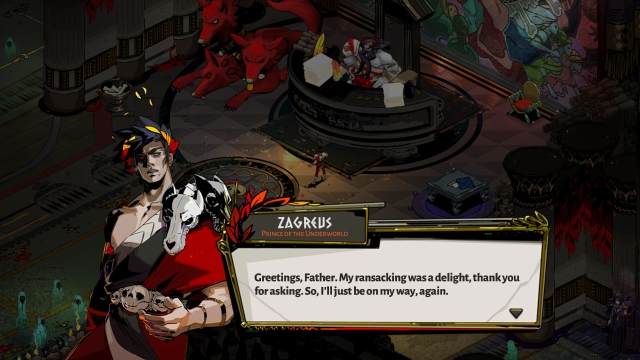 You can't escape the underworld. Once you've expired and settled into the realm of the dead, you're there forever. Honestly, though, leaving is overrated. The game Hades perfectly demonstrates this notion by doing everything in its power to ensure you stay put. Most of the time, it accomplishes this task by jacking your jaw with numerous foes and tons of devastating traps. Death, though, is only a minor setback because you can immediately try your luck again, and die again, and try again, and die again. You'd think this rigmarole would grow tiresome and you'd put the game aside after your thirtieth untimely defeat. Yet you keep going, slaying monsters, racking up goodies, never tiring of the experience and not caring that you constantly lose.

Because as it turns out, there's something more sinister keeping you locked up in the Stygian death maze: obsession.

After you croak, you return to the safety of the in-game hub. There, you speak with various characters from Greek tales, both human and god alike. Hypnos first greets you as you emerge from a pool of blood situated next to a queue of fallen souls. Achilles lingers just around the corner from there, as well as the canine Cerberus, the primordial goddess Nyx, and even Medusa (now just "Dusa"), who appears as a floating head holding a feather duster with one of her snakes. And not too far from her sits the man himself, Hades, who only criticizes your decision to peace out of the inferno.

For the first few runs, you might ignore some of these folks. However, you eventually find yourself seeking each of them out so you can learn more of their individual backstories or hear other such gossip. Soon enough, you start hoarding nectar from the dungeons to give to them, receiving equippable items (called "keepsakes") and side quests in return that you can't help but obsessively complete. Soon enough, you hit a point where you can hand your friends vessels full of ambrosia until you're pretty much best buds. 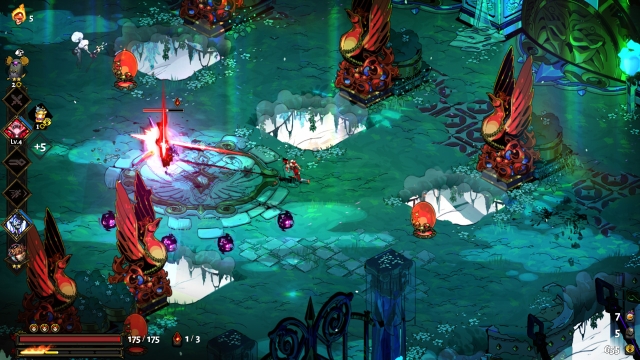 Obtaining ambrosia isn't easy, though. It's not like you just grind for cash for a few minutes and toss the coins to a merchant. You either need to make significant progress within the dungeon to obtain one from a certain boss encounter, or you'll need to farm other items like mad and make some exchanges. This is where obsessive people like myself get gleefully lost in the experience, because there are so many different currencies to amass that grant you access to tons of great unlockables.

And there are all kinds of improvements on offer, whether we're talking RPG-style stat boosts or cosmetic changes to the hub and dungeons. Call me crazy, but knowing that I can go back to the main parlor and spend various types of cash on upgrades, beefed up statistics, special equipment and decor softens the blow of death. Hell, I'd even say that sometimes I welcome it. I find myself fighting off hordes of enemies until they wear me down, not caring that I'm about to give up the ghost because I possess enough gemstones or diamonds or Cththonic keys to make significant changes. When I've finally been bested, I step out of the aforementioned bloody pool and immediately set to work, increasing my damage output, commissioning the construction of healing fountains in the dungeon, unlocking new weapons, or exchanging titan's blood to bolster that arsenal.

Incessant level boosting isn't the only reason to continue playing, though it does sweeten the deal considerably. Honestly, just questing through the dungeon and battling alone proves to be enough to hold your interest, mostly because the surprises you encounter and battles you fight in the procedurally generated gauntlet remain thoroughly exciting. Early on, you button mash with a standard attack, cutting through droves of smaller monsters with reckless abandon. Sometimes you might need to utilize a special attack to pulverize tougher critters, or opt to use a limited ranged strike. 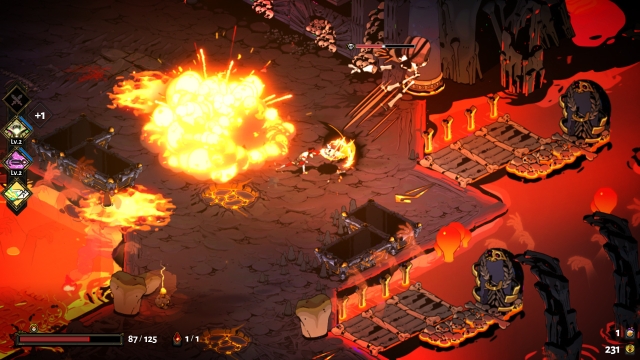 However, things get trickier as you advance through the affair. Foes come with shields you must strip off before officially damaging them, plus they become meatier, speedier and more difficult to take out. Your only recourse then is to find ways to add to the punishment you dish out and hope it's enough to stop the tidal wave coming your way: fallen heroes equipped with deadly weapons, pink balls that unleash swarms of venomous butterflies, miniature chariots that explode on impact, hydra heads that protrude from the ground and teleport before you can hit them, and bomb-lobbing skeletons who refuse to hold still.

You spend most of these conflicts weaving around the battlefield with your dash technique, cutting loose stabs and slices and skewers, carefully moving so you don't put yourself in a precarious position. Meanwhile, even the room itself tries to kill you with floor spikes, rotating blades and the like. There's nothing worse than not paying attention to your footing and accidentally backstepping into a statue that impales you with a mighty spear. All the same, these hazards only add to the chaos, helping to transform this title into more than just a mindless button masher.

If you want to stand a chance in the pits, then you'll need items to give you an edge over the competition. That might mean purchasing some goods from the ferryman Charon, or locating messages from Olympic gods. These aren't your average communiques, either. Speaking with a deity grants you access to various perks called "boons." Some of them are fairly simple, as they might increase the power of your standard or special attacks, add elemental attributes to them, provide you with a summoning spell, or even turn your dash maneuver into a weapon itself. Others, however, aid you in more complex ways, allowing you to heal during various circumstances or altering your main strike in a way that's both advantageous and detrimental (but worth considering nonetheless). 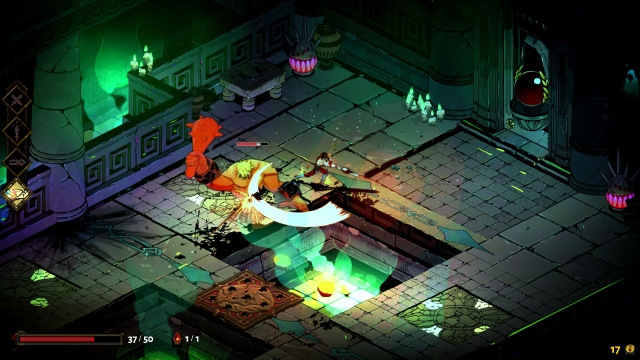 As you might've guessed, all of these boosts disappear when you perish, and you never know when you're going to get them back or be able to earn a certain desired combination of them. As this title is procedurally generated, the rewards offered during a single run change. On top of that, completing a chamber usually gives you a choice between two or three other rooms to select, each with differing goodies. So the experience changes every time you enter the battlefield, sometimes slightly and other times drastically.

You might worry that you won't get a good enough combination of boons or things offered at Charon's shop to finally see yourself out, but that ultimately doesn't matter. You'll find plenty of things to keep you busy while you sharpen your playing skills or access new rewards. Part of you might not want to depart because you'd be leaving unfinished business--and that's the kind of person I am. When I play roguelikes, I want dungeons loaded with surprises, but I also want boatloads of permanent changes and unlockables that can be acquired through combat, and in both respects Hades is more than generous. It's so giving, engaging and exhilarating that I don't foresee myself ending my stay with it any time soon...
4.5/5

If you enjoyed this Hades review, you're encouraged to discuss it with the author and with other members of the site's community. If you don't already have an HonestGamers account, you can sign up for one in a snap. Thank you for reading!

© 1998-2021 HonestGamers
None of the material contained within this site may be reproduced in any conceivable fashion without permission from the author(s) of said material. This site is not sponsored or endorsed by Nintendo, Sega, Sony, Microsoft, or any other such party. Hades is a registered trademark of its copyright holder. This site makes no claim to Hades, its characters, screenshots, artwork, music, or any intellectual property contained within. Opinions expressed on this site do not necessarily represent the opinion of site staff or sponsors. Staff and freelance reviews are typically written based on time spent with a retail review copy or review key for the game that is provided by its publisher.