My first death in Gato Roboto came about a minute or two in. The first enemy you face in this Metroid-esque game is just a plant-like thing that literally does nothing but sit there. And I walked into it and got damaged. Then walked into the next one. And the next. Why? Because Gato Roboto is deliberately monochrome. And I kept seeing this plant as a part of the background and not an actual obstacle. It took getting hit by it four or five times before my brain finally made the switch. I know, it's kind of pathetic. 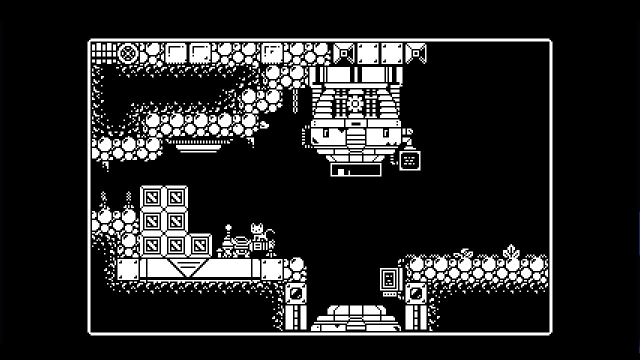 OK, that plant isn't in this picture, but see, there's other background sprites. I'm not crazy, honest!

But at the same time, who designs the first enemy in a black and white game to look like something that should be in the background? If the designers didn't choose to intentionally limit their artistic options by going with a strict black and white look, this never would have happened. But they did intentionally limit the game, hurting its functionality. Ultimately, it's not a huge deal. But maybe it is, or maybe this is all just ominous foreshadowing (oooh, mysterious!)...

But I digress. Gato Roboto is a Metroidvania starring an ordinary cat. This cat can jump up walls and sort of swipe at things with its paw, but otherwise is completely unsuited for roaming around this harsh alien environment. The good news is that there is a mech suit just waiting around for the cat to jump in, allowing it to fire its blasters and missiles and explore the abandoned laboratory that the cat's owner happened to crash into and find a way to escape. How does the cat know how to do this? Who cares? What you should care about is that you need this mech suit to travel to the four different regions to get the computer to unlock the path to the final area (you know how it is). But alas, the way is occasionally blocked, and the brave little cat must leave its mech suit and sneak around once again to keep moving forward.

That mech suit/cat aspect is the core gimmick here, and it works reasonably well. As you traverse the world, you'll often find tubes or paths that you can't reach, leading to an a-ha moment a few screens later when you end up back at them in a different form. And the cat sequences are not as short as you might expect. You'll be running along several screens, which might seem stressful since it's one shot and you're dead, but it's never impossible. Yes, there are a few tricky spots, but that just means there's a palpable feeling of relief when you finally reach your mech again. And then you can often move through those areas with your overpowered supersuit and feel all awesome as you blaze through the areas you were once so tentative about.

The only thing I find bizarre, to be honest, is that you run around with a mech, but early in the game you then go to a watery area and soon find a submarine. So it seems at first that this is going to be a theme, your little kitty finding all sorts of different devices to drive around. But no, that was it. OK, fine, you can hop into an immobile cannon at one point, but the submarine was really just a hint of a promise at diverse mechs that got shot down immediately.

Oh well, maybe it's for the best. To be honest, controlling the sub wasn't much fun; the mech worked much better. There was a satisfying rapid firing, but your ammo was weak enough to still allow a challenge. And your rocket system was kinda cool too. Instead of limited ammo like most games, you would overheat if firing too many rockets, meaning you could either aim for a slow, steady barrage on boss fights, or try to knock out 2-3 quick rockets and then just dodge or fire your normal blaster until it cools off again. Oh, and it had a natural recoil too, so be careful where you use it. Jumping feels fine, and you eventually get a double jump (of course) and a dash too, so traversing the world isn't a chore. Lucky for that cat, huh?

So you go exploring through the four distinct areas, although exploring may not be the best phrase here. Thanks to the mech/kitty mechanic, each of these areas is meant to feel like a maze, as you may find yourself running through tubes as a cat for several screens to get to a new mech area, and then need to go the long way around to get back to your starting position. But the reality is that they are almost completely linear. Sure, every once in a while you have a choice of two different options of which way to go. But that means you either pick the way to continue the main path, or you go the route that gets you an optional powerup (there's a few health expansions, a few alternate color options (that also doubles as currency), and some very rare weapon upgrades. So really, you hope you guess right and get the latter option, because if you don't you will have to do a lot of back tracking to find it again. Ultimately, each of these regions can be "explored" in a fairly tame fashion.

OK, so, I promised that bit at the beginning, about how the intentional choice to limit the game's design ultimately hurt it, was foreshadowing, right? Well, the problem's plain to see (too much technology? Never mind...). Exploration is a huge part of the appeal of Metroidvanias. Seeing 4 doors open to you, and knowing that some could lead to dead ends. Winding paths that end up taking you to surprising locations. Meaningful backtracking, as you return to familiar areas that now seem new with all the new traversal and weapon upgrades you have found. Numerous secrets and differing grades of rewards, many of which you just won't find without a guide. But when you deliberately make a mini-Metroidvania like Gato Roboto, a lot of that disappears. Each area is distinct, you will never be running along and suddenly burst out of an area and say "hey, I've been here before!" You won't find the joy of discovering a well hidden powerup, because there are so few and they are so obvious. The exploration elements are simply perfunctory, which, when it comes to exploration, basically kills the purpose of it. Discovery needs to surprise you, which simply can't happen in a mini-Metroidvania like this.

If all you're looking for is a pleasant little side scroller, this isn't a bad choice. It's fairly priced for its size, controls well enough, and has at least some charm with its black and white aesthetics and space-cat setting. The cat/mech mechanic is fairly original, and thus you may find it worth checking out for that reason alone. Everything is reasonably satisfying except the exploration is so basic it simply would be better if it wasn't there. The choice of making a very small Metroidvania ultimately means that pleasant is the best you can strive for; there is simply no way to create a memorable exploratory experience in such a bite size chunk. But if all you're looking for is a cheap, short platformer, then the experience is certainly good enough.

If you enjoyed this Gato Roboto review, you're encouraged to discuss it with the author and with other members of the site's community. If you don't already have an HonestGamers account, you can sign up for one in a snap. Thank you for reading!

© 1998-2021 HonestGamers
None of the material contained within this site may be reproduced in any conceivable fashion without permission from the author(s) of said material. This site is not sponsored or endorsed by Nintendo, Sega, Sony, Microsoft, or any other such party. Gato Roboto is a registered trademark of its copyright holder. This site makes no claim to Gato Roboto, its characters, screenshots, artwork, music, or any intellectual property contained within. Opinions expressed on this site do not necessarily represent the opinion of site staff or sponsors. Staff and freelance reviews are typically written based on time spent with a retail review copy or review key for the game that is provided by its publisher.