Immortals: Fenyx Rising is a game about family dysfunction on an epic scale. A young hero named Fenyx arrives on an island following a shipwreck and soon embarks on a quest to save everyone still alive--including the gods themselves--from the vengeful might of a powerful being named Typhon. 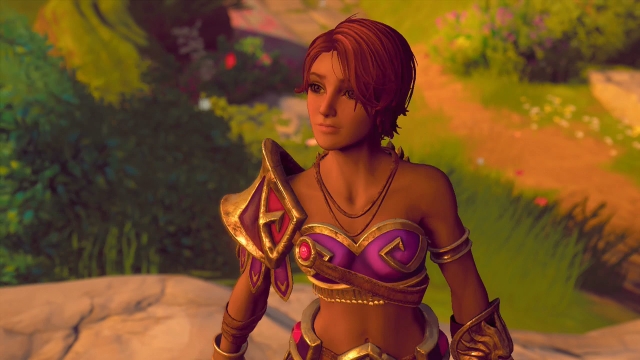 For my Golden Isle journey, I went with the default character presented to me: a young woman with reddish hair cut short near the base of her neck. You can make modifications if you prefer, but I felt like my version was the perfect avatar as she set about recovering from the loss of a brave fallen brother who meant the world to her. Quickly, she met Hermes, a divine but imperfect ally who convinced her to save Aphrodite, Ares, Athena and Hephaistos from the perverted versions of themselves they have now become. If you plan to take down a great evil, it's best to do it with the gods by your side, right?

I know I've started out by talking an awful lot about the game's plot, but I feel justified in doing so because Immortals: Fenyx Rising does an especially good job of weaving its narrative strands throughout the experience and mining traditional tales for emotional impact. The overall framework is established by Prometheus, presently chained to a rock on a frigid cliff and telling Zeus the story of how Fenyx set out to save the day, all while the skeptical elder god scoffs and makes comments that underline what fragile folks the gods of Greek legend could be. There is juvenile humor and innuendo throughout, but that's an asset rather than a flaw. Cutscenes handle the meatier exposition and clever audio commentary fills in elsewhere. It is a thing of beauty and the approach made me grow to really care for the principle players. 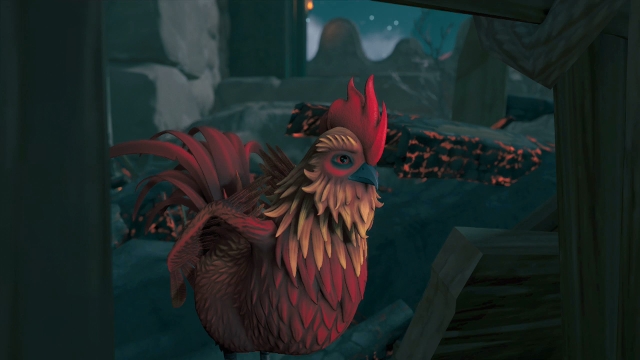 But what about the gameplay? Well, I like that too. In a general sense, this feels like the Ubisoft take on The Legend of Zelda: Breath of the Wild, which is my favorite game from the last two decades or so. However, there are changes here to address the main "quality of life" complaints I've seen leveled at Nintendo's open world masterpiece.

First up, the world is more compact, without much in the way of expansive open spaces. That's not to say you're dealing with a small environment, by any means. Even flying from one end of the isle to the other with the Wings of Ikaros strapped to your back requires a lot of time, and you'll be obliged to stop along the way. The landscape you traverse is dotted by quite a lot of hills or mountain peaks or trees or statues and crumbling ruins. Animals like boars, bears, and lions (but no tigers) roam the region, and there are mythical monsters aplenty. Numerous vaults also are available, the game's meatier equivalent to Breath of the Wild's shrines. 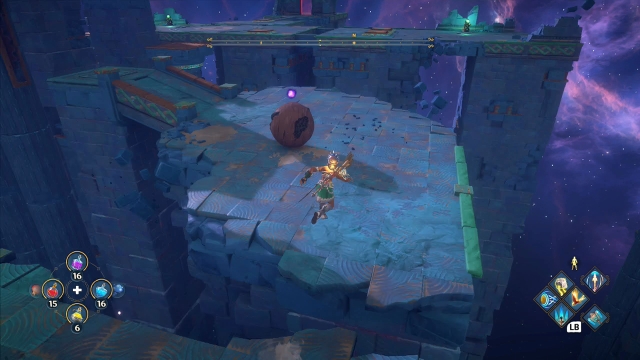 Vaults definitely are a high point in the game, and I say that as someone with a strong preference for the "overworld" in games of this nature. The vaults make an excellent diversion from the world roaming, lasting longer than the shrines did in Breath of the Wild but still managing to avoid wearing out their welcome in many cases. Most of them focus on puzzle-related tasks, such as rolling boulders into place or pushing blocks to trip switches, but there are some surprisingly demanding sequences requiring less conventional thinking and even platforming skills. Battle arenas are relatively uncommon.

Combat certainly didn't get put on the back burner, though. Fenyx is capable of learning numerous skills to become a real fighting force. The potential savior of the isle carries a limitless supply of arrows, as well as a sword and an ax, and develops advanced techniques perfect for stringing together intricate combos while dodging, parrying, leaping and slamming enemies every which way. It's as satisfying as combat has felt to me in an adventure game since, well... ever. I don't suppose I'm a sufficiently skilled wordsmith to communicate just how great it actually works, especially with practice. 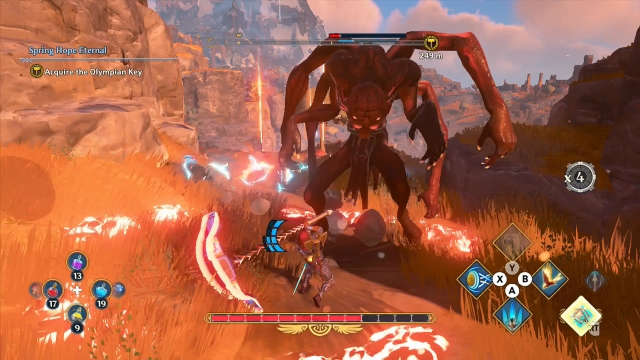 One thing that makes combat a hit is the lack of weapon degradation. You find a handful of different swords and axes and bows and you can use them as often as you like without fear they'll break. A few upgrades make them more powerful still and add neat perks. The same is true of your armor. Add all of that to the aforementioned skills and Fenyx is loaded for bear, ready to handle almost anything Typhon might care to send her way. This changes the adventure's dynamic. You are vanquishing the wilds, rather than surviving within them. The power is yours, and you're not afraid to use it!

Outside shrines, there's still plenty to do that prepares Fenyx for encounters with the game's toughest monsters. Numerous treasure chests, "epic" and otherwise, are strewn about the hills and caves. Securing their contents generally requires combat with fierce beasts, or some puzzle solving, or just a thorough search of the vicinity. Fenyx dashes along trails, or tames and rides various breeds of horse and similar creature, or even soars through the skies when a birds-eye view proves helpful. Besides that, most surfaces are climbable and plentiful updrafts serve as shortcuts to the high road. Reaching most points of the world doesn't feel like a chore at all, and even scaling high peaks is manageable. Weather effects are minimal, without frequent squalls to produce rain-slicked ledges like the ones I remember from Breath of the Wild. 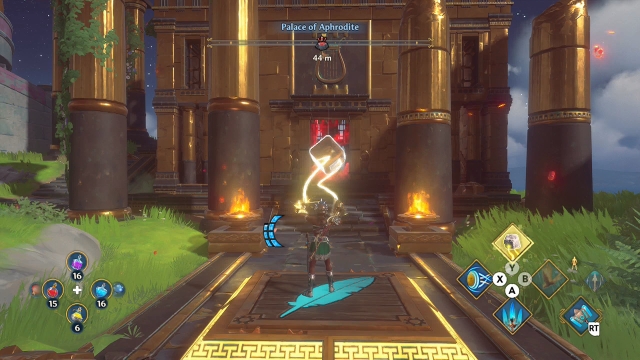 The game is beautiful in both the artistic and technical senses, whether by sunlight or moonlight. I paused at numerous points during my journey, just to savor the moment. There's the occasional muddy texture, but most of what I saw was crisp and visible from a decent distance. The vista-filled Valley of Eternal Spring is especially lovely to behold, with grassy plains and flowering brush rising from the edge of a placid sea. The more agriculturally minded Grove of Kleos is similarly pleasant, while the northern and eastern portions of the isle skew desolate but with a rugged appeal that makes up for it. Dozens of hours into my time with the game, I was still finding new sights to enjoy, which is quite the accomplishment by the developers.

Perhaps this will seem a bit odd, but my biggest gripe with the game is that it feels almost too perfect, its design too accomplished. As much as I love what Ubisoft built, the end result lacks a certain something. It's all so relentlessly competent, the triumph of an absurdly skilled team of people putting everything to a vote and saying, "Let's do what came before, only slightly better." While I can appreciate that approach to game design, there's a pervasive sense that Immortals: Fenyx Rising is a measured response to The Legend of Zelda: Breath of the Wild, rather than an earnest attempt to do its own thing. 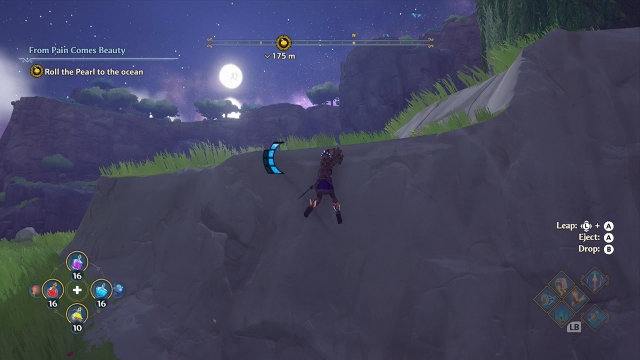 In any event, I wouldn't want to lend my minor gripes with Immortals: Fenyx Rising more heft than they deserve. On the whole, the game provides one of the best adventures I've had. It unfolds in a breathtaking world well worth scouring and features exemplary combat. It challenges players to hack, slash, and solve puzzles in roughly equal measure, rewards the spirit of adventure that built and still drives the medium. If sometimes it feels the slightest bit too reminiscent of masterpieces such as Breath of the Wild without offering much that is wholly its own, well, at least that still makes for one heck of a ride. Climb aboard!
4.5/5

If you enjoyed this Immortals: Fenyx Rising review, you're encouraged to discuss it with the author and with other members of the site's community. If you don't already have an HonestGamers account, you can sign up for one in a snap. Thank you for reading!

© 1998-2021 HonestGamers
None of the material contained within this site may be reproduced in any conceivable fashion without permission from the author(s) of said material. This site is not sponsored or endorsed by Nintendo, Sega, Sony, Microsoft, or any other such party. Immortals: Fenyx Rising is a registered trademark of its copyright holder. This site makes no claim to Immortals: Fenyx Rising, its characters, screenshots, artwork, music, or any intellectual property contained within. Opinions expressed on this site do not necessarily represent the opinion of site staff or sponsors. Staff and freelance reviews are typically written based on time spent with a retail review copy or review key for the game that is provided by its publisher.