Apparently JRPGs are my personal mafia because just when I thought I was out, they pull me back in. A number of years ago, I found myself getting tired of them. An attempt to salvage the relationship with Kemco's mobile games -- far shorter and less bloated than the average big budget release -- didn't exactly help matters due to how it eventually felt like I was playing the same mediocre game over and over again.

For a while, I was thinking my forays into the genre would have to be limited to Dragon Quest and Final Fantasy, so I could still play the two series that got me into these games and actually have a chance of enjoying them. But then I got PlayStation Now, noticed a decent number of JRPGs there and started to hear that damnable siren's call once again. Just when I thought I was out, they pull me back in

I guess I shouldn't be surprised -- after all, it's not like my desire to indulge all sorts of addictive behavior is simply going to evaporate. However, I wasn't expecting a goofy title like Megadimension Neptunia VII to be the catalyst getting me back into wanting to start playing JRPGs regularly.

On the surface, I probably shouldn't have liked this game so much. The main characters are often-bickering anime girls, monster designs are recycled to the degree I was having Kemco flashbacks and there is a LOT of dialogue to sit through. People who get upset about fanservice likely will be appalled by this game and I was even taken aback a few times. Main protagonist Neptune had the appearance of a pre-teen girl, so when she'd get obsessed with taking baths with her friends, leading to lengthy streams of dialogue taking place in front of an image of undressed, underaged anime girls with their naughty bits barely covered by hair or shampoo, I was half-expecting Chris Hanson to come knocking on my door.

But aside from occasionally getting weirded out by a handful of "What the hell is wrong with you guys?!?" moments, I found myself having a really good time. Give the lion's share of the credit to the combat system. It hit all the right notes, being both complex and accessible, inspiring me to constantly put in the effort to make my team just a little bit more potent. While battling is done via the basic turn-based format, there's a lot going into how you use those turns. 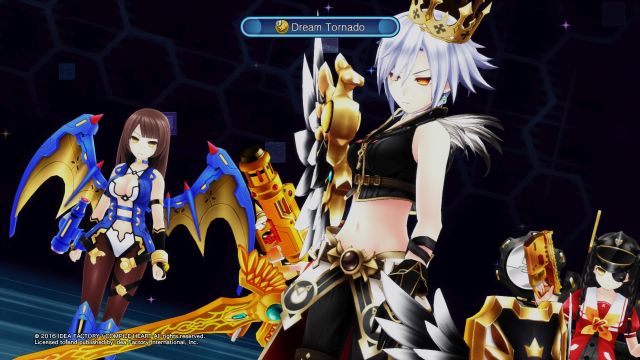 First, your girls will have a movement meter, allowing you to position them around the field in fights. This is not cosmetic, as you'll cause more damage if you hit an enemy from behind than you will from the front. When attacking, you'll have the usual options of melee or magic/skills, but there's more to those than initially meets the eye. Melee fighting is done via combos, with your girls gaining new attacks as they gain levels. Rush attacks hit many times for low damage per hit, Power ones only hit once or twice for really good damage and Standard ones try to provide a happy medium. How many attacks and what kind of attacks you can perform at any time is determined by a character's weapon. Each one has various slots that you program attacks into, allowing you to chain them together and assault an opponent three or four times in one turn.

But that's not all! If you pay attention to those attacks, you'll see stipulations under a number of them saying things like "last attack was Rush" or "haven't used Power yet". If you meet that stipulation with an attack, every hit of it will be critical, causing more damage and having a 100 percent chance of connecting. Now, every time a character gets a new weapon, you'll immediately be going to the Combo menu to program attacks into it in such a way to maximize the number of critical hits they'll get per turn. With one weapon, you'll have a Power-Power-Standard sequence that'll carry you through fights; with the next, you'll switch over to Standard-Rush-Rush-Rush because that combination is far more effective.

You also have a meter that rises as you land attacks. While most spells and skills use this game's version of magic points to cast, you'll eventually get some really good ones that expend that meter once you've filled it. Rush attacks will fill that bar a lot more quickly than Power ones because you'll get far more hits per turn, making them really useful even if they can be a bit lighter on damage caused.

Even if I liked nothing else about this game, I'd have likely played through it simply because I really got into this combat system. Early in the game, I found myself needing to grind a handful of levels to get through dungeons. By the end, I'd gotten so good at programming my characters that I only needed to do so in order to handle a few really tough optional monster hunts, as well as one late-game boss fight that's out-of-this-world difficult compared to any other mandatory encounter.

But I did enjoy more than the combat. Megadimension Neptunia VII is one of the more entertainingly whimsical games I've experienced. The main girls all represent big video game companies or systems and their world takes the concept of video game console wars being real-life and running with it, with each girl essentially serving as a goddess in their realm and needing to do good deeds in order to maximize her popularity in order to maintain her ruling status. 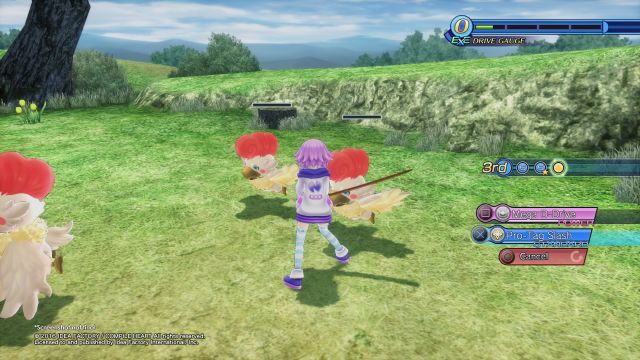 Making this work is how this game takes delight in breaking the fourth wall with regularity. I've played a handful of games possessing this sort of meta "we are in a game" self-awareness and they've all gone the same way. For the first couple hours, they'll gently poke fun at RPG tropes and then realize they are RPGs and start playing everything straight. Instead of continuing to have fun with the concept, they retreat into being just another game. Not here. Neptune makes sure you are completely aware this is a game all the way up to the end, including a late-game tantrum because she's being forced into a supporting role despite being the main protagonist. Every new plot point of the game is introduced with a short television show where two characters attempt to preview the action coming up in the next couple hours with varying degrees of success, while a number of enemies and dungeons serve as references to other games and series.

In another departure from the norm, this game is divided into three separate chapters, each with its own plot. The first one has Neptune and little sister Nepgear get teleported to a besieged world where they help its lone human inhabitant, Uzume, fight back against the dark forces threatening to destroy it. Neptune and Nepgear return to their world for the second chapter, only for them and the other goddesses to get displaced from their positions by a quartet of usurpers and their mysterious backers. Solve that issue and the main adversary of the game, who'd previously been content to serve as a "devil on the shoulder" corrupting force, takes center stage for the final chapter. It's a neat way to do things, as it does sort of feel like you're playing three shorter games that are all connected to each other. It's essentially just a cosmetic difference, but I do appreciate the effort put into shaking things up and making the experience feel a bit more than "just another JRPG" because my personal experience says that's how you can get burnt out on a genre.

I didn't really get burnt out on this one. I didn't complete all the optional quests and skipped the toughest optional dungeons -- a couple of which awkwardly attempt to combine this game with elements of Spelunker, but I did the majority of that stuff, as well as the entirety of the main quest. The main issue I had was in how there might have been too many playable characters. Overall, I think you'll get access to around 15 girls and you'll constantly be getting switched from one group of them to another, only having most or all of the group at your disposal for brief periods. In other words, don't get attached to any of them, because within a couple hours, you'll likely be losing them for a long time in order to control two or three new girls.

While there may have been a few annoyances included with Megadimension Neptunia VII, the overall experience was a positive one. The dialogue often made me laugh and the combat system got me involved so that I never felt like I'd been reduced to going through the motions just to make it to the credits. I'm not going to complain about being pulled back in if the end result is that I'm having fun and, more often than not, I was while playing this game.
4/5

© 1998-2021 HonestGamers
None of the material contained within this site may be reproduced in any conceivable fashion without permission from the author(s) of said material. This site is not sponsored or endorsed by Nintendo, Sega, Sony, Microsoft, or any other such party. Megadimension Neptunia VII is a registered trademark of its copyright holder. This site makes no claim to Megadimension Neptunia VII, its characters, screenshots, artwork, music, or any intellectual property contained within. Opinions expressed on this site do not necessarily represent the opinion of site staff or sponsors. Staff and freelance reviews are typically written based on time spent with a retail review copy or review key for the game that is provided by its publisher.