While I wasn't quite on board with all the critical praise the God of War series has received after playing the first game, I understand it a bit more after playing through God of War II. Released in 2007 -- two years after the original game -- this game felt like a more consistent and polished effort by developer Santa Monica Studio.

To a large degree, not much has changed. You still control Kratos, who moved into "God of War" status after the events of the first game. He is still really angry at everything and prefers to work out his issues by slaughtering anyone or anything unfortunate enough to enter his range of sight. His foes range from undead soldiers to mythological beasts such as Minotaurs and Gorgons. Combat is primarily done via combos derived from the strong and weak attacks of his default weapon, although he also gains a couple optional weapons and a number of spells to supplement it. By killing enemies and opening treasure chests, he'll collect large amounts of red orbs that are used as currency to unlock stronger versions of each weapon and spell. The production values are great for the PlayStation 2, the action is fast-paced and the violence is emphasized to the degree it often gets over-the-top to cartoonish proportions. I mean, it's not every game that you unlock new pathways by taking an imprisoned scholar, beating him until he reads an inscription and then bashing his head in so that his blood can serve as the necessary key. Here, you do that very thing more than once!

All of which creates a pretty fun experience, especially when you consider that this isn't purely a one-dimensional kill-fest. Even if his appearance and demeanor give the impression that Kratos and thinking are two things that mix together like oil and water, the burly brawler will need to show off his intellectual side in overcoming an assortment of puzzles. For me, the biggest strength of God of War II comes from how much more consistently those were integrated into the fighting.

In the first game, Kratos will start out on a ship and then move to Athens, traveling through the city, a temple and some sewer tunnels before crossing a desert to get to an isolated temple. Before reaching said temple, the puzzles are a distant afterthought to the fighting. You'll take on waves of soldiers and monsters with regularity and only rarely need to exercise your brain. Then, you'll enter the temple and battles become far less frequent while you're regularly solving puzzles or finding ways to get through deathtrap-laden rooms. For half the game, I wanted a bit more thinking to supplement my slashing and for the other half, I wanted more opportunities to rest my brain and focus on fighting. 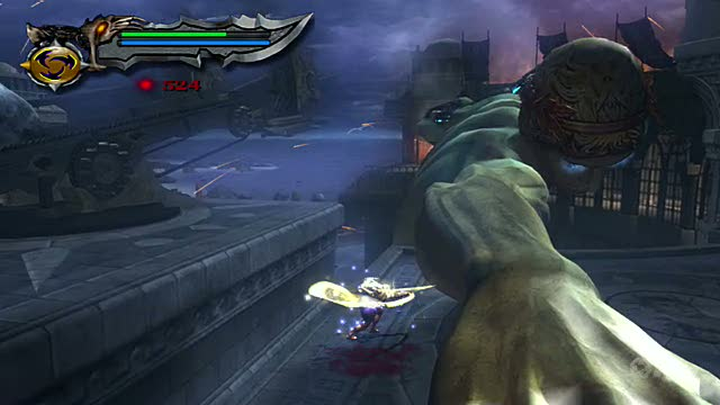 God of War II is the result of that issue being fixed. Kratos constantly alternates between puzzles and combat. In one room, you'll be pushing blocks or manipulating switches to find ways to achieve access to new chambers. Make it to the next location and you'll find yourself engaging in battles with multiple waves of enemies. And this is true for the entire game. The penultimate boss is less a fight than a multi-stage puzzle. Leading to its chamber is a long hallway littered with massive fights against virtually every enemy in the game.

Another positive: When I said "penultimate boss", if I was talking the first game in the series, you'd still have a few hours of action in front of you before reaching the end. For whatever reason, that game was boss-averse. You'd fight hordes of regular enemies, but the game only had about three actual boss fights. God of War II is utterly littered with them. You'll kill fabled Greek heroes, massive monsters and even take down a god. Oftentimes, these fights utilize both combat and puzzle-solving, as you'll have to figure out a way to make the enemy vulnerable before being able to let Kratos do what he does best. Along with the superior job of integrating the puzzles and fighting, this also does a lot of improve the flow.

And having a good flow really helps a lot, especially when considering this game is really light on plot. Kratos might now be the God of War, but that's done nothing to help his disposition. If anything, he's more angry than ever, due to how he's never been absolved of guilt for the deaths of his wife and child. Therefore, he's using his status to turn his Spartan army into a world-conquering force that only answers to him, while he answers to no one. Eventually, Zeus gets fed up and decides it's time to make an example, so he sets up an elaborate trap involving a massive, malevolent statue and Kratos needing to place all his divine power into a sword to defeat it.

The end result? The statue gets destroyed, Kratos gets seriously wounded in the process and Zeus effortlessly dispatches him. However, Kratos isn't the sort to simply accept death -- he did fight his way out of Hades in the first game, after all -- and this time, he's going to have help. One of the Titans, helps him escape the underworld and offers a partnership with the fallen god due to longstanding issues her and the rest of the Titans have with how Olympus' gods usurped their power and imprisoned them. However, for Kratos and the Titans to get their revenge, he has to find a way to regain his former powers. The solution: To find the Fates to have his destiny changed and reverse time to before Zeus was able to best him. Of course, it's not easy to reach the Fates, others also are looking to gain their favor and that trio of demigoddesses aren't exactly inclined to help upstarts with anger management issues. 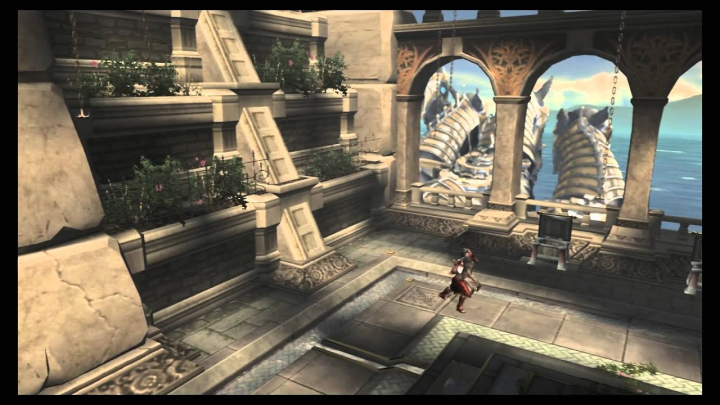 All of this pretty much is disclosed within the first hour or two of the game. After that, the plot is essentially condensed to: "Man, those Fates aren't easy to reach, are they? Well, better keep moving!" You'll fight monsters, solve puzzles and get through one location to get to the nextand then you'll fight monsters and solve puzzles to get through that place in order to do it all again in another area. Plot development is measured in what monster you just killed or what puzzle you just solved and how doing that helped in moving from one set of ruins to the next.

And you know what? That is okay. God of War II is one of those games that's fun to sit back and enjoy the ride while playing. If there's one thing I love about these games, it is their production. The locations you visit just have this otherworldly feel, with giant statue heads and crumbling architecture everywhere. There's just this feel of "mysterious" permeating everything that I don't always feel when I play games. And that's the sort of feeling that can carry me through things, even if I'm not completely enamored with everything I'm experiencing.

While better than the first game, God of War II wasn't a total success. I'm just not a huge fan of quick-time events and at times, it seems those things are required to do just about anything. I mean, I get the appeal of them -- it allows battles to have a more cinematic feel, while still giving gamers something to do while watching the confrontation. I just don't like being forced to tap random buttons with precision to win a fight, as opposed to actually fighting. And here, you'll be doing quick-time events to get slightly better rewards for killing normal enemies, to finish off bosses, to hold a conversation with a Titan and a number of other things. Hell, to finish off the final boss, you have to execute several commands in a row, with one mistake causing you to die and start that stage of the battle again. Eventually, it just gets old. I can tolerate these things in moderation, but this game is as moderate about them as it is about its violence and bloodshed.

I don't know if I'd put the full blame for this on the constant use of quick-time events, but I did feel like this game wasn't clicking with me as much as it should have. I enjoyed it and played through it, but it tended to be in small doses where I'd pick it up and make it to the next save point or the one after that before feeling like I wanted to play something else. With the games I truly love, I find that I can pick them up and play for hours, but here? I'd play for an hour or so and decide I'd done enough for one day.

Still, while I haven't figured out just how this series became so acclaimed, that doesn't mean I don't like it. God of War II does a great job of improving upon the original, giving players the same sort of challenges, but with the combat and puzzle-solving mixed together in a way that prevents either from becoming tiresome. In a lot of ways, this is a pretty stunning game -- it just didn't connect with me to the degree I'd have liked.
4/5

If you enjoyed this God of War II review, you're encouraged to discuss it with the author and with other members of the site's community. If you don't already have an HonestGamers account, you can sign up for one in a snap. Thank you for reading!

© 1998-2021 HonestGamers
None of the material contained within this site may be reproduced in any conceivable fashion without permission from the author(s) of said material. This site is not sponsored or endorsed by Nintendo, Sega, Sony, Microsoft, or any other such party. God of War II is a registered trademark of its copyright holder. This site makes no claim to God of War II, its characters, screenshots, artwork, music, or any intellectual property contained within. Opinions expressed on this site do not necessarily represent the opinion of site staff or sponsors. Staff and freelance reviews are typically written based on time spent with a retail review copy or review key for the game that is provided by its publisher.