To recap: When I played Dark Souls, I really loved the experience. Then, when I played Dark Souls II, I also really loved that experience. So, it probably wouldn't strike many people as a surprise when I say that my next foray into the tough-as-nails action RPGs by FROM Software also provided a great time. However, there was one thing that did leave me a wee bit startled: Just how much I did love Bloodborne.

In short, Bloodborne gave me everything I dug about the first two Dark Souls games, but made things even better. When I finished those games, I remember feeling a bit fatigued due to the constant struggle to find a way to overcome giant monsters boasting far more power and durability than my unnamed hero. With this one, I was wishing there was another DLC or something because I'd killed and killed and died and died and still hadn't had my fill.

If you've played a Dark Souls game, you'll have a pretty good idea as to what you're getting. You'll generate a hero and enter the game's world to slay monsters in order to obtain a particular substance that serves both as experience points and currency. Combat is designed to be tough and strategic, as enemies often can rack up the damage in a hurry and your guy won't exactly be the picture of durability. Therefore, dodging and parrying blows often provide the difference between life and death. However, if you do find yourself taking wounds, there is a quick way to heal yourself in or out of battle. Of course, there is a small catch to that silver lining, as it's not like time will stop while you're replenishing life. If you haven't put some distance between you and whatever's beating up on you, it could easily finish the job before you've completed that action.

Generally, there won't be a lot of plot-related stuff happening during these games and you'll be required to scour every corner of the world and collect every item and weapon possible to glean little bits of knowledge about why the world is in the shape it's in. With FROM Software, the emphasis is placed heavily on challenging action, with a few role-playing elements such as gaining levels and using crafting to improve weaponry thrown into the mix. Due to their difficulty, these games might not be accessible to everyone, but for those of us who get into that sort of thing, they can easily become "can't miss" apps for our system of choice. 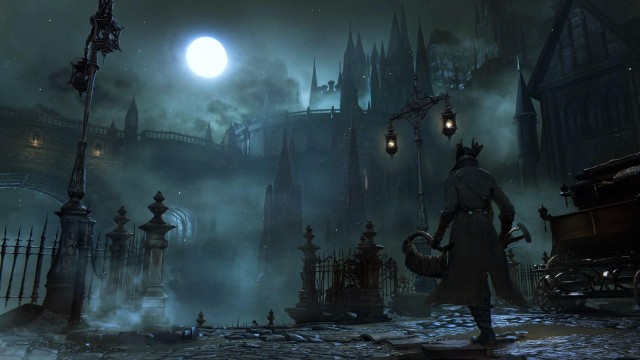 Due to the variety of weaponry a player can accrue during the course of a game, there can be a diverse range of tactics used in these games. The great thing about Bloodborne is that its combat near-perfectly played into how I tackle the many challenges of FROM. In Dark Souls, it didn't take me long to come to the conclusion that hiding behind a shield and looking for parry attempts wasn't my style, so I went for (somewhat) mobile and aggressive. I'd run up to enemies and whack at them with the biggest damn weapon my character could handle, relying on rolling and running away to evade their attacks.

Bloodborne rewarded me for that strategy. Shields barely exist in this game and armor isn't exactly a huge factor beyond how certain sets are better or worse at resisting various types of damage than others -- hell, in this game, you can't even upgrade that stuff, with all your materials going towards weaponry. Your character is nimble and fast-moving, as are many foes. Parrying is done via guns, as you can shoot enemies when they're in the middle of an attack to stun them and leave a window for a critical hit. Manually healing is a quicker process, so it's tougher (but still possible) for enemies to interrupt you. And then, there is what might be FROM's greatest creation: the Rally system.

The way this works is simple. When an enemy hits you, it takes a couple seconds for your life to actually drain. During this time, assuming you're still not getting bludgeoned, any damage you can inflict is partially restored to your character. Some weapons are better at this than others, but this feature is a godsend. I'd get smacked for a third of my life with one hit, roll around my foe and whack it two or three times to find out that damage had essentially been negated by my reprisal. This complemented my play style perfectly because my aggressive offense typically means I'll be taking damage. Being able to regain that health without having to extract myself from close-quarters combat was just awesome.

Not that this means I found this game easy. I'd laugh at that notion, if not for fears my laughter would gradually get louder and higher-pitched until I was insanely cackling and sobbing at the same time. I wasn't the only one enjoying the fast-paced combat that rewarded aggressive behavior, as enemies also found that tactic to their liking. Hell, on my first day with this game, I was killed by a random cannon-fodder enemy in the game's first area because it started a combo that didn't end until I was dead. It didn't take long to figure out that evasion was just as important as aggression in the weird dream world of Yharnam. 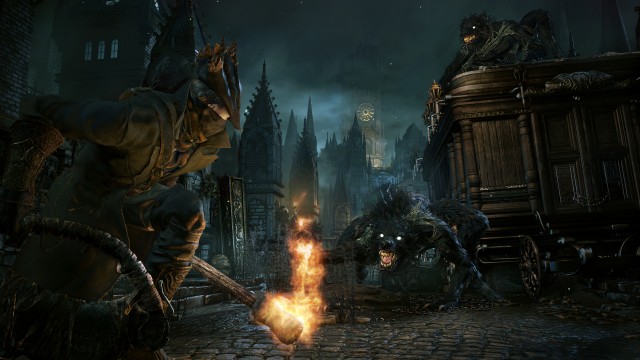 That's the setting of this game. Compared to the fantasy-based worlds of the Souls games, Bloodborne is mostly derived from horror. Common enemies in the early going tend to be people in various stages of lycanthropy -- some being overly hairy humanoids and others being full-on werewolves. As the game progresses, things get more creepy and cosmic horror-esque. In a dark forest, many of those wolf-men start having snakes erupt from their heads. Near-invisible ghosts stalk a remote castle. And, most importantly, when you start getting to the root of Yharnam's problems, you'll discover the city in at the mercy of FROM's versions of Lovecraft's Elder Gods.

While the faster pace to the action and the setting are different from the Souls games, the overall feel is similar enough that FROM veterans will feel at home. Lanterns serve the same role as bonfires in providing checkpoints and fast travel locations, you'll have a small safe zone that serves as a hub where you can enhance weapons and turn in your blood echoes (ie: souls) to gain levels or buy stuff. While there is a smaller selection of weaponry in this game, they tend to have two forms that can be switched between with the press of a button. For example, one of your initial choices, the Hunter's Axe, normally is a one-handed weapon. By switching to its alternate form, its range is extended and it becomes a two-handed weapon. While you can't hold a gun for parrying now, you'll also be well-suited to assault multiple enemies at once with its wide swings.

One notable difference, though, is that Bloodborne has a near-infinite amount of content thanks to the inclusion of Chalice Dungeons. After beating a boss that can be encountered fairly early into the game, you'll be able to start entering these places. Completely separate from the main plot, they provide a number of optional dungeons that eventually get more challenging than anything you'll encounter in Yharnam. Root dungeons are randomly generated and an infinite number can be created, as long as you have the proper items to do so. Then, there are 10 non-Root dungeons with a fixed layout that culminate with their own final boss. 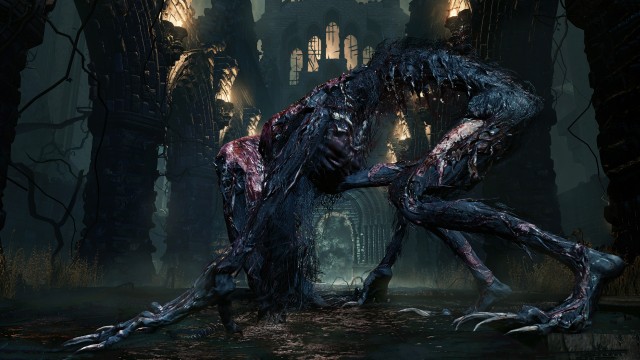 Overall, these places just added to my enjoyment. They host a number of new monsters and bosses, as well as enhanced versions of Yharnam opponents. The only flaw I found in this came in one of the last Chalice dungeons I unlocked, where I had the "minor" handicap of having to go through it with only half my current health. Working through the levels of this dungeon was pretty fun and strategic, as I had to be more careful tackling enemies. Fighting its three bosses, though, was really painful. I never did get to the final Chalice Dungeon because, after getting one-shot by the last floor's boss a few times, my patience ran dry.

But I can't demerit this game for that little issue -- it just meant I didn't do every single optional challenge. I'm pretty sure I did get through everything else up to and including its really tough DLC final boss, while enjoying virtually every minute of the way. When it comes to complaints, mine are few and far between. I wasn't all that keen on this game's Frenzy ailment, where certain attacks can raise a meter that when filled will result in you losing the majority of your life. Especially since one particular enemy located in out-of-the-way places can inflict it simply by noticing you. One place where that enemy can be found is this game's version of FROM's beloved poison swamp level, with this one being the least inspired of those I've experienced yet. Other than that, my biggest complaint is that it eventually ended.

Even with games I've loved and given great scores to, there always seems to be a point where some of the magic fades and I go from being immersed in its world to deciding it's time to start rushing through things to get to the closing credits. That did not happen here. I remember dying repeatedly to that final Chalice Dungeon boss I confronted and deciding it was time to give up and simply finish the game. I remember just sitting there and staring at the screen, trying to find a reason to keep the Bloodborne party going. Seconds turned into minutes and before I knew it, half an hour had passed. Thirty minutes of me staring at my television agonizing over this decision and wishing there was another area to explore or a couple more bosses to challenge, so I could put this moment off a bit longer. Not every game can be a winner, but when one like this comes along, I find it easy to forget all about the sub-par ones I've experienced throughout my life.

If you enjoyed this Bloodborne review, you're encouraged to discuss it with the author and with other members of the site's community. If you don't already have an HonestGamers account, you can sign up for one in a snap. Thank you for reading!

© 1998-2021 HonestGamers
None of the material contained within this site may be reproduced in any conceivable fashion without permission from the author(s) of said material. This site is not sponsored or endorsed by Nintendo, Sega, Sony, Microsoft, or any other such party. Bloodborne is a registered trademark of its copyright holder. This site makes no claim to Bloodborne, its characters, screenshots, artwork, music, or any intellectual property contained within. Opinions expressed on this site do not necessarily represent the opinion of site staff or sponsors. Staff and freelance reviews are typically written based on time spent with a retail review copy or review key for the game that is provided by its publisher.