What happened to the ball rolling games? Every other genre and subgenre and subsubsubgenre has hundreds of little clones out there in the indie market vying for attention, but rolling a ball? Zilch. Aww, we can't make it yet another metaphor for depression to show how deep we are? Can't show off our "gorgeous" pixel art that looks like every other game? Can't use buzzwords such as Soulslike? Have to rely on just making a game that's fun? Those poor widdle developers. OK, sorry, rant over. It's just odd that there's 5000 games on this system and only one brand new ball rolling game.

It could be worse though. At least this is a good one!

You may not think so at first glance. Everything looks rather basic; the menu system is simplistic and oddly unintuitive, there aren't dozens of options (although, what do you need options for in a game like this?), and there are only 60 levels. And, naturally, games these days require the first 10 levels to be incredibly simple tutorials that you can't help but win on your first try. And the next 10 are only marginally more difficult. And then the next 10 might start giving you something of a challenge, but only if you are reckless. So there you go, blowing past half the game in an hour. Barely needing to play.

But the levels get harder. And longer. A lot longer. Most of these games are designed with very short experiences, perhaps a minute at most, but in Marble it Up we can have a level that lasts several minutes, even if you know what you're doing. It's not always a "get to the finish line" design; many are mazes or demand you collect some number of diamonds before you leave. So you have to play it a couple times just to get a feel for the layout before you can seriously challenge the par times (more on that later). And even then, it can hurt your brain. Some in particular involve shifting gravity, resulting in bizarre architecture that would make MC Escher proud. Try to remember the best way to go when you have no idea which way is up! 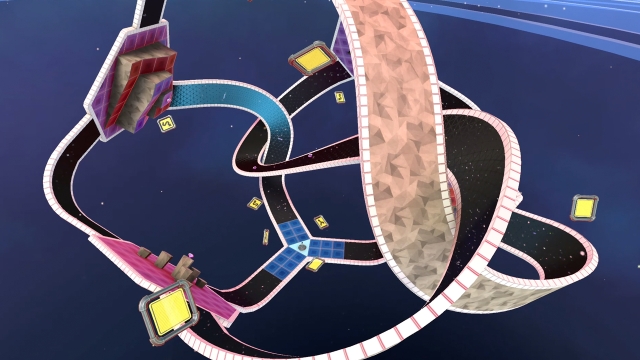 I hope you don't suffer from vertigo

And the individual obstacles become harder, too. Besides just moving, there's also jumping involved, plus various powerups to allow your marble to jump higher or get a boost or float after blasting off a cliff. You can't blame the controls if you fail; they work well enough (let's face it, you better not screw up the movement in a game that is literally nothing else but movement). You have free range camera, and it's often easier to manipulate the camera while holding straight forward than trying to control both sticks at the same time, so you have the freedom to see without much frustration. And there will be frustration, as you need to jump off massive gaps at just the right speed and just the right angle, work with gravity as needed, ride along thin rails while jumping over barriers, avoiding spinning blades, you name it. The good news is that there are checkpoints involved, often very generous checkpoints, so you don't have to redo these multi-minute stages in one go. But still, those last 10 levels can be absolutely brutal. Remember how you blew past the first 30 levels in an hour? It might take you that long just for a single one at the end. But when you finally cross that goal line, it feels like a real accomplishment.

Until you look at the time involved. You may notice gold medals on your early levels gave way to boring little circles in the end. There are par times for silver and gold, and you won't be anywhere near them. Especially if you use the checkpoints, which doesn't reset your time. On the flip side, you can find pause icons that slow down time, and it's up to you to choose whether or not to go after them (risking possibly time or death if you fail). And yes, this is where the key to the game's fun is. Sure, you can die 100 times on one of these killer levels, barely lucking out from checkpoint to checkpoint, and consider yourself a winner just when you get through it once. But no, try to MASTER the level. Learn it. Keep starting over from the beginning, not a checkpoint. Feel each challenge until you understand exactly what angle you need to hit the ground at rather than guess. And do that for every one of the 20 obstacles on a single level. Until you are perfect. And you get the gold. Now THAT is an accomplishment.

Until you look at the leaderboards and see your skills are nothing compared to the best out there. Between the jumping and the clever geometry, there is an insane amount of sequence breaking available to you if you are bold enough. It just shows the depth of what is available to you. Yes, you can take everything slow and cautious, and make it to the end. Or you can practice and take things fast, showing off your marble rolling skills and make gold. Or you can just go crazy and go fly off the edges and bounce off walls and gain incredible breakneck speed and somehow land in the goal at the end in mere seconds.

Well, you can do the last part. I can't. I'll stick with just the intermediate challenge of getting gold; that's tough enough.

But it doesn't matter. Ball rolling games are simple, but they have to do a few things right. Responsive, intuitive movement with the ability to make tiny adjustments. Challenging levels to complete. A push to become even better, to truly master those challenging levels. Marble It Up has all of those elements. And it also has a few ideas that you don't find in others like Monkey Ball: really long levels with checkpoints, the ability to manipulate time, and really mindbending, nonlinear architecture. Sure, it's a bit shorter than I would like. But that's the only real flaw in an otherwise solid package. Even if the genre is all but dead, I'm glad I didn't have to settle.

If you enjoyed this Marble It Up! review, you're encouraged to discuss it with the author and with other members of the site's community. If you don't already have an HonestGamers account, you can sign up for one in a snap. Thank you for reading!

© 1998-2021 HonestGamers
None of the material contained within this site may be reproduced in any conceivable fashion without permission from the author(s) of said material. This site is not sponsored or endorsed by Nintendo, Sega, Sony, Microsoft, or any other such party. Marble It Up! is a registered trademark of its copyright holder. This site makes no claim to Marble It Up!, its characters, screenshots, artwork, music, or any intellectual property contained within. Opinions expressed on this site do not necessarily represent the opinion of site staff or sponsors. Staff and freelance reviews are typically written based on time spent with a retail review copy or review key for the game that is provided by its publisher.