Mafia II is essentially a one-note game, but that note is good enough to at least make it worth playing. Telling the story of Vito Scaletta as he transforms from a juvenile delinquent to a soldier in the mob, this 2010 2K Games game tells an engaging tale that'll hit the right notes for fans of mafia films. Spanning 15 chapters, you'll get to experience the dizzying highs of criminal life, while also enduring minor bumps in the road such as your house getting burned down by vengeful thugs or having what might just be an entire city's worth of criminals out for your head.

Vito's induction into the world of organized crime and the decisions that leads him to make essentially composes the entire game. While, on the surface, Mafia II superficially resembles a Grand Theft Auto clone, that isn't exactly the case and players looking for that sort of thing will likely feel a bit let down. In this game, you have the main plot and very little else. Other than playing through one chapter after another, your options are amazingly limited. You can scour every nook and cranny of the city of Empire Bay to find a bunch of collectibles, such as Playboy Magazine centerfolds and wanted posters. You can steal cars to deliver to a pair of locations for additional cash that can be used on fancy clothes and more weaponry. And, uh, you can drive around while listening to three or so radio stations and the collection of 40s and 50s tunes they'll play.

It's always fun to drive around cities in games like this and the music was a nice change of pace over the typical video game fare, but overall, those activities just feel pointless. Collectibles are for completionists and the only thing Mafia II made me want to complete was its main story to see where Vito's choices took him. The cash for cars deal seemed nice on the surface, but Vito's finances tend to be directly determined by the plot, so the only real function of that extra money was to attempt to get me absorbed into the world of a game that doesn't care about anything besides its main story.

But, like I said, that story is quite appealing, especially to people like me -- a guy with dozens of films pertaining to the mafia or crime in general at his disposal. Vito grows up in a poor neighborhood in the Italian district of Empire Bay, where he occupies himself getting up to petty crime shenanigans with best friend Joe. Setting the tone for virtually everything that happens to him in this game, his youthful crime spree comes to a halt when he's arrested. However, since it's World War II time and he's Sicilian-American, he's given the opportunity to avoid incarceration if he joins the military to help in the fight against Italys Axis forces. 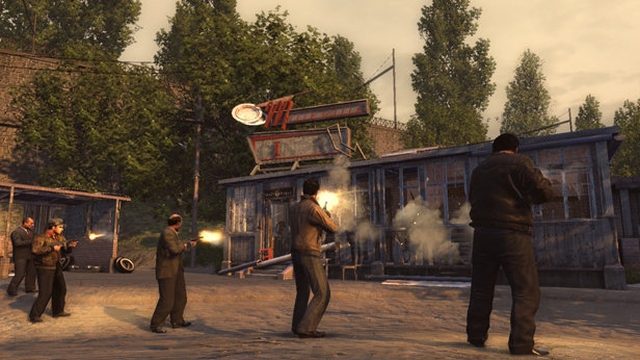 After a few minutes in that conflict that serves as the game's tutorial, Vito is injured and gets to come back to Empire Bay on leave. This allows him to immediately reconnect with Joe, who now officially has "guy who knows a guy" status. And, well, that guy he knows is capable of hooking Vito up with phony discharge papers so that he can stay on American soil and care for his family, as his father now is dead and his mother and sister are having issues with loan sharks looking to collect on dad's debts. Of course, Vito also will need to find work and, regardless of how much his mom wants him to find a good, clean job, that sort of thing doesn't pay nearly as well as the jobs Joe's people can hook him up with. And with those debt collectors wanting a sizable chunk of change, it's a no-brainer as to what direction his life is going to go.

The first few chapters might not be the most action-packed, but they do a good job of getting you out of your neighborhood. You'll get to drive around Empire Bay, you'll get to meet a few of Joe's associates and you'll get involved with stealing cars and committing other acts of crime.

And then you'll end up in jail because Vito seems cursed to never get away with anything. But he did impress the right people with how he refused to rat out his accomplices, leading to Leo Galante, one of the area's most respected mobsters, taking him under his wing. Not only does Vito get his protection while in jail, but the older criminal is able to pull strings to get him released early and set him on the path to be a player in whichever of the city's three main crime families he wishes to join. Of course, that proves to be a double-edged sword. Sure, he'll get bigger and better jobs and find the money rolling in, but he'll also find it easier to be placed in those "between a rock and a hard place" situations where it's really easy to have really powerful men really wanting you dead.

And I ate all this up. My mob movie connoisseur self wouldn't exactly give Mafia II's story high marks for originality, but it was a well-told tale and I enjoyed watching the highs and lows of Vito's life play out in front of me. I just wish there had been a bit more to supplement that story. 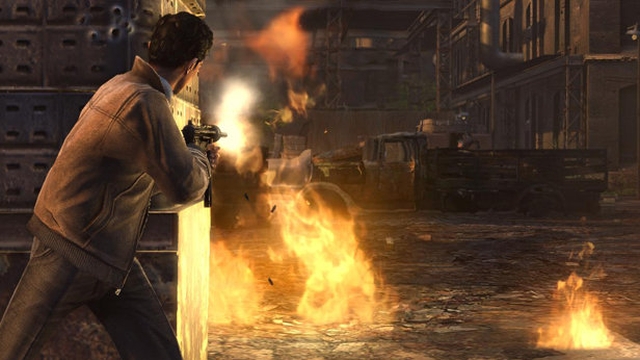 On the surface, the gameplay is very comparable to the average GTA game. Missions play out as a mixture of driving and cover-based shooting, performing criminal acts in public tends to result in the cops coming after you and so on. The issues I had tended to be more annoying than game-breaking. A couple missions have weirdly-spaced checkpoints, with one late-game chapter turning into a painful experience as I had to get through two different firefights -- one of them arguably the toughest battle in the entire game -- before that "game saving" icon appeared on the screen. And the cops have a habit of turning some missions into situations where you're either lucky or you're not. You might instantly give them the slip and have no trouble avoiding pursuit, or they might quickly get on your tail and prove impossible to shake. There'd be times where I'd fail a section of a mission three or four times and then succeed so easily on the next try that it was obvious the random number god determined thered be less resistance from law enforcement for me to endure.

But like I said, those were annoyances. When I was going through them, my teeth might h ave grated a bit, but then I'd overcome that adversity and things would be cool again. The thing that really bugs me about Mafia II is simply how little there is to do besides robotically go from plot point to plot point. This game has the appearance of a sandbox game, but plays like a linear adventure. The vast majority of the city only exists to provide roads for you to drive on while going from one place to another, with those collectibles seemingly thrown in as afterthoughts. There are no side quests other than disposing of cars for cash and no real reason to do that or anything other than stick to the plot, even if that means you're playing a 10-hour game with very little replay value. I mean, that prison stage where Vito meets Leo is good story-telling, but a lot of dialogue interrupted by random fist fights isn't exactly something I'm drooling to re-experience.

With Mafia II, you get what you get, even if it leaves you wanting more. You'll have a game that's fun to experience once due to the combination of a pretty gripping story and quality, if occasionally flawed, action, but that's it. The game is short and nearly bereft of optional activities, so instead of being sucked into its world, I found myself dashing from one objective to the next, barely even noticing my surroundings as anything more than dots on a map. It's a fun game and well worth playing through, but it's also a game that's generated as many "What if?" moments as anything else I've played in quite some time.

If you enjoyed this Mafia II review, you're encouraged to discuss it with the author and with other members of the site's community. If you don't already have an HonestGamers account, you can sign up for one in a snap. Thank you for reading!

© 1998-2021 HonestGamers
None of the material contained within this site may be reproduced in any conceivable fashion without permission from the author(s) of said material. This site is not sponsored or endorsed by Nintendo, Sega, Sony, Microsoft, or any other such party. Mafia II is a registered trademark of its copyright holder. This site makes no claim to Mafia II, its characters, screenshots, artwork, music, or any intellectual property contained within. Opinions expressed on this site do not necessarily represent the opinion of site staff or sponsors. Staff and freelance reviews are typically written based on time spent with a retail review copy or review key for the game that is provided by its publisher.