Blaster Master on the NES was a great idea - combining overhead and sidescrolling exploration into a single game - but plagued by several problems (many of which derive from the limited hardware). Blaster Master Zero was a 2017 remake of this flawed classic, fixing the obvious issues such as no saving. Unfortunately, that only served to highlight new flaws, most notably around the overhead segment. Blaster Master Zero 2 is a sequel to that game. It too follows the trend of fixing the flaws of its predecessor... but thankfully this time it is finally a game worthy of the great idea we first saw over 30 years ago.

That idea? Most of the game takes place as a sidescroller, where you are the pilot of a tank-like mech, jumping and blasting your way through hordes of mutants in a semi-nonlinear map. Along the way, you will find multiple caves, at which point you hop out of the tank and head into an overhead world. These segments are generally shorter, sometimes with a few puzzles but definitely filled with all sorts of hazards. Here, you have various subweapons such as a grenade or mines, but your blaster rifle is your key offense. You can level up said rifle, starting with a measly little shot, moving through a short but powerful shield, a whip, a charge shot, all the way up to the mighty wave beam. But be careful, as getting hit knocks your rifle down one level. Kill the boss, grab the item, get back in your tank, and blast your way to somewhere new. 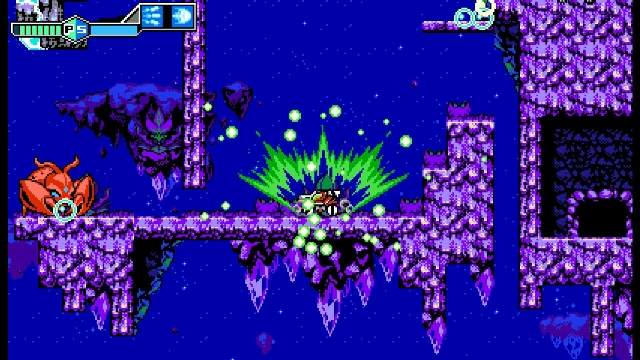 Somewhere... IN SPACE! Yes, this sequel ups the stakes as it were, turning your tank into a spaceship (don't ask me how) on a trip back to the home planet of the tank's creators. It seems that mutants are attacking throughout the galaxy, and you are but one of many masters of blasters. So you are on a journey back in order to save your support droid, the lovely Eve, who is all corrupted with mutant ooze, and are helped and/or hindered by many of the other heroes you meet along the way.

What this plot means is that the Metroidvania-light structure of the previous games is scrapped in favor of more linear levels. Each solar system has a main world that you travel through, as well as several optional smaller planets. The main planet isn't a straight line, true, but you're rarely lost and there is relatively little backtracking involved. Likewise, the smaller planets are usually just a few screens that consist of a challenging sequence of some sort (often for an optional powerup), but no mazes. Some may bemoan this as a loss, but it really isn't. The game is not made for lengthy backtracking, new powerups that give you new skills, and the like. This level design simply does not exist in the overhead realm, meaning the Metroid-ness is only in half the game and thus kills the flow. Focusing on action and moving forward, rather than getting lost, allows the combat to stay in the forefront with the side/top view shift providing all of the diversity the game needs. There's still mild exploration and some backtracking involved, but the pacing is much better.

Speaking of much better, the overhead segments have seen a very thankful overhaul. Three things happened: the levels are shorter (mostly), the wave beam got downgraded (thankfully), and the challenge therefore increased. You see the latter part from the very beginning, when you end up chased by villains with shields in the very first cave and completely unable to attack them. Part of this is to teach you about your new counter ability, a powerful new move that can only be unleashed while you are being attacked. But it mixes up the overhead parts, keeps you on your toes, and ensures you cannot just rely on the wave beam to destroy everyone. After all, if you're getting hit more often, there's a greater chance you'll lose it. But more importantly, the wave beam's effectiveness decreases the more you use it, ensuring you cannot just keep spamming the weapon and instead need to let it recharge. Combine this with the fact that the levels are shorter and more focused, and the experience is now more intense, more harrowing than before. You can expect to use your grenades and your counter as much if not more than the wave beam, and you can expect the wave beam to disappear before the end. And thus, reaching the end is satisfying, rather than simply a resentful sigh of relief that the overhead section is over with. 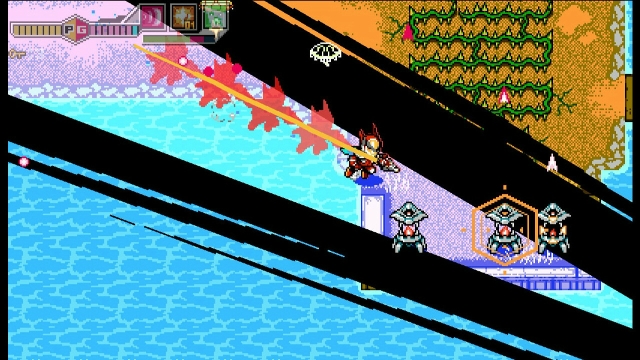 So you get to move on back into your tank. And guess what, that's better too! Again, your subweapons have been revamped, and again they are more notable. Sure, there's some that are there for puzzles only, like your portable trampoline that you'll forget about 2 minutes after the last time you need it, but others are highly desirable. Like a giant shockwave that obliterates everything in a specific radius. You also no longer rely on enemies dropping recharge capsules for them; instead falls from a large height recharges your weapon energy. So there is some strategy in a fight of going out of your way to fall, all while dodging bullets and mutants. It's doesn't distract too much from the action, but it does become a necessity sometimes. Especially on bosses. Oh, yeah, there are more sidescrolling bosses. Which were way more fun than the overhead ones in the original game. And they are still just as fun here. And in this case, more is better. It seems Inticreates learned that the tank was more fun, and leaned into it more.

And that's the theme here. Sidescrolling was more fun in the last game than overhead? Then let's use it more often. The Metroidvania aspect was getting in the way last time? Dial it down. The wave beam making the overhead sections trivial? Dial it way down while making enemies harder. Overhead sections too long? Shorten them up a bit. Does this mean the game is perfect? Of course not. The multiple planet aspect wasn't implemented as well as one might hope (you seemed to spend way to long just flying through space in a glorified level select screen, especially at the end when backtracking occurred). There are several boss fights that end up being recurring for no good reason, which was probably used so they didn't have to design new ones. And the showdown with the starship sentry was a complete letdown and incredibly easy compared to some of the more challenging fights. One could argue that this is still two steps forward, one step back. But why let imperfection stand in the way of good? The game itself was enjoyable from beginning to end. And after over 30 years, it's about time that Blaster Master has a game that I can say that about.

If you enjoyed this Blaster Master Zero II review, you're encouraged to discuss it with the author and with other members of the site's community. If you don't already have an HonestGamers account, you can sign up for one in a snap. Thank you for reading!

© 1998-2021 HonestGamers
None of the material contained within this site may be reproduced in any conceivable fashion without permission from the author(s) of said material. This site is not sponsored or endorsed by Nintendo, Sega, Sony, Microsoft, or any other such party. Blaster Master Zero II is a registered trademark of its copyright holder. This site makes no claim to Blaster Master Zero II, its characters, screenshots, artwork, music, or any intellectual property contained within. Opinions expressed on this site do not necessarily represent the opinion of site staff or sponsors. Staff and freelance reviews are typically written based on time spent with a retail review copy or review key for the game that is provided by its publisher.