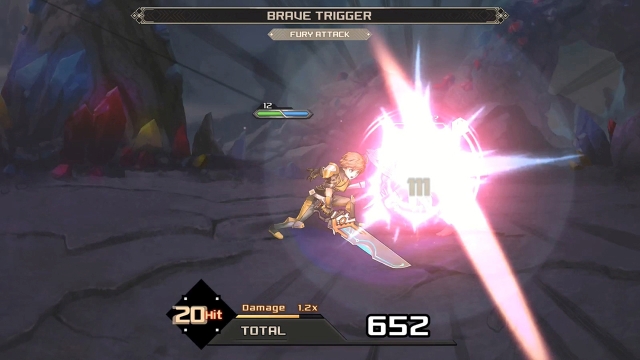 Most RPGs offer long campaigns, lasting anywhere from twenty to one hundred hours. Since this is a lot of time to donate to a video game, these titles need to give you a reason to spend it gawking at a screen. Typically, that reason comes in the form of a hook that pops up early in the proceedings, followed by something very crucial to maintaining a player's interest: an "investment."

In order to get through all of those long hours without guilt, we need to invest in something. Sometimes we identify with a character--usually the protagonist--and want to see them overcome personal obstacles or mature. In other cases, the storyline hits us with such an intense or far out series of opening events that we want to see where it leads. Hell, our reason for staying a lengthy course might even be that we find a certain gameplay feature addictive or intriguing, and story be damned. It ultimately doesn't matter what these adventures use to mesmerize us, just that they provide us with gripping content.

This is where the RPG Azure Saga: Pathfinder initially struggles. It tries to convince you to throw your enthusiasm behind its lead (Synch) and his android companion (Noide). Synch lives on a space station orbiting a planet that may be able to sustain life. As it turns out, his father was conducting research there before he mysteriously vanished. Synch and Noide thus steal a spacecraft and crash on world, then set out to locate the boy's dad. Are you rooting for him yet? 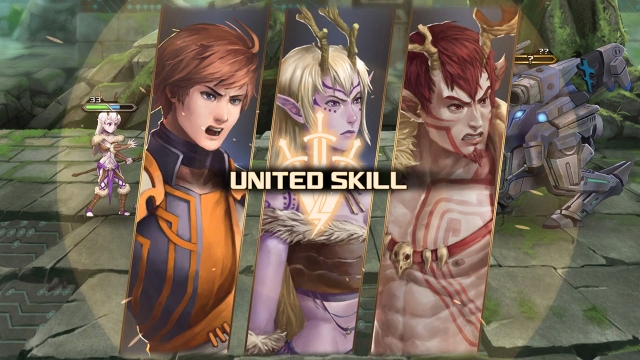 For a good portion of the campaign, you come to see Synch as a one-dimensional character that you should only care about because his father remains missing. He grows worse as you advance, because he sometimes comes across as an uncaring prick. Mostly, the guys sees outright injustices that he has the power to address, but only shrugs his shoulders and says it isn't his problem (at least early on). He only rises to the occasion when doing so serves his purposes.

You see, the planet he's on already is inhabited, and with humans no less. They've even forged your run of the mill RPG kingdom, and it needs materials to fight off creatures called "Hollows." In order to secure these resources, the citizens have to mine from land that's sacred to the Ivry, a race of deer-like humanoids also dwelling on the planet. Unsurprisingly, humanity just doesn't care about honoring the spiritual traditions of the Ivry, as the kingdom regards them as nothing but mindless animals.

You know that Synch can't remain stone-faced in this situation, and that he's eventually going to have a change of heart because that's what heroes do. The problem is that's really all there is to his arc: he lost his father and the only other thing he cares about is getting off the planet and leaving everyone to whatever hell is brewing in their realm. Prior to maturing, he has no standout or redeeming qualities that tell you to invest in him, and you'll likely write him off before he sees the light. 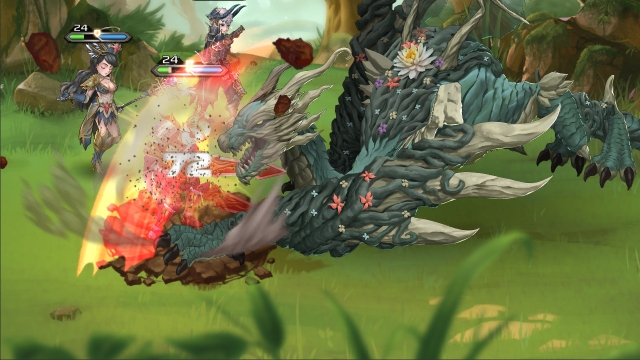 Obviously, the game would need other non-narrative elements to keep you busy. Unfortunately, its only offerings consist of standard RPG features. For instance, combat is the same as it is in any other title. You select basic commands (fight, item, etc) from a menu, or execute a "fury" strike that's similar to Final Fantasy VII's limit breaks. Each combination of three party members also learns "united skills," where they combine particular spells or special attacks to pulverize a target, a la Chrono Trigger... While none of these features is outright bad and actually should exist in any roleplaying game, none of them really stands out. There's no other defining characteristic that begs for you to keep playing.

It also doesn't help that fights occasionally drag on. You'll face more than your fair share of damage sponges that take forever to fell or lightning-quick creatures that dodge nearly everything you throw at them. I'm not exaggerating, either; some bats late in the campaign evade every one of your party's blows for multiple rounds, before one of them finally connects. Your only option is to be sure to use characters with high accuracy, or else you're going to be in for a long scuffle. Still, fast beasts aren't as bad as the undead, who sport healthy defense stats and can reanimate after suffering defeat. You often have to dispatch a single zombie down twice in each fight, leading to encounters that last forever. I don't know about any of you, but that's the last thing I want from a plain, straightforward combat system.

You hope that something will stick with you as you advance, but this title is rife with "just okay" content. You venture through plain dungeons that offer simple tasks (like switch puzzles and teleporters), speak to NPCs who tell you nothing of value and embark on vanilla side quests. Nearly all of them consist of fetch fare or "kill x of [enemy type]," and aren't all that exciting or invigorating as a result. You can also craft items, but that function feels more tacked on and rarely yields anything that you can't buy in a store or that you absolutely need. 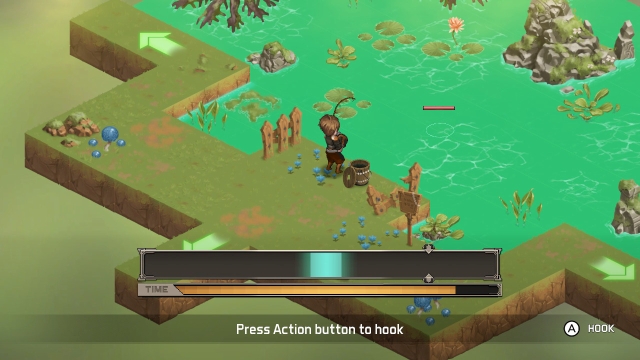 As if this adventure wasn't boring enough, it's also incredibly grindy. If you want to outfit your characters with fresh equipment, you'll need to load up on gold coins. Unfortunately, most adversaries drop a pittance at times when you need a veritable fortune. Do you want that 5000 gold ring? Well, enjoy slaying goons for 100ish a pop. Oh, and when you go to buy that ring, make sure you save at the store front. This game loves to glitch if you enter and exit the store menu a couple of times, forcing you to completely reboot the app.

But all of this strong material doesn't arrive until after you've grown tired of the experience and you just want it to be done. By the time you somewhat care about Synch, you just want him to go the hell away. You're left with the choice of trying to re-invest in the adventure, give up because its spike in entertainment value is "too little, too late," or merely force your way through the last of it so you can cross it off your backlog. Ultimately, this is your average RPG that could've been above par had it just given us a reason early on to stick with it, be it a better story or more remarkable features.

If you enjoyed this Azure Saga: Pathfinder DELUXE Edition review, you're encouraged to discuss it with the author and with other members of the site's community. If you don't already have an HonestGamers account, you can sign up for one in a snap. Thank you for reading!

© 1998-2021 HonestGamers
None of the material contained within this site may be reproduced in any conceivable fashion without permission from the author(s) of said material. This site is not sponsored or endorsed by Nintendo, Sega, Sony, Microsoft, or any other such party. Azure Saga: Pathfinder DELUXE Edition is a registered trademark of its copyright holder. This site makes no claim to Azure Saga: Pathfinder DELUXE Edition, its characters, screenshots, artwork, music, or any intellectual property contained within. Opinions expressed on this site do not necessarily represent the opinion of site staff or sponsors. Staff and freelance reviews are typically written based on time spent with a retail review copy or review key for the game that is provided by its publisher.