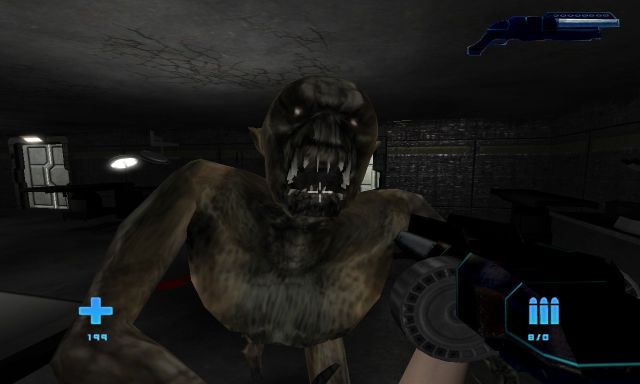 I have to award the indie first-person shooter Insincere some cool points. Despite its heavy flaws, the game carries a certain kind of personality you don't see much in the medium. Its dated visuals, weird voice acting and synth soundtrack call to mind obscure sci-fi fare from the '80s, especially the sort of junk you might catch when waking up to late night HBO or find at a local video store. Games seldom get camp right, but this title absolutely nails it.

Sadly, that's the only thing this shooter nails...

The early outs of the campaign play out more like a horror experience. You nab a handgun and a wrench, then explore basic corridors and bump off the occasional gangling creature with bony fingers and needle-like teeth. These beasts have a habit of practically appearing behind you and chomping off some of your health before you can get a shot in, but especially love clipping through walls and striking you when they shouldn't be able to. Not to be outdone by these slack-jawed monsters, protagonist Joseph Walker also has a knack for pushing his body through physical barriers, though he mostly uses this talent to get stuck in the environment. This happens quite often, though thankfully he can usually jump out of these situations.

That bug isn't even the worst of your worries. Quite often, the game crashes either just before a cutscene or when loading a save file. You'll then receive a pop-up message moaning about a runtime error, forcing you to reboot the app. If you're lucky/unlucky, you'll be able to advance beyond the troublesome spot without issue after reloading. Still, it's a persistent enough problem that it drags down the finished product. 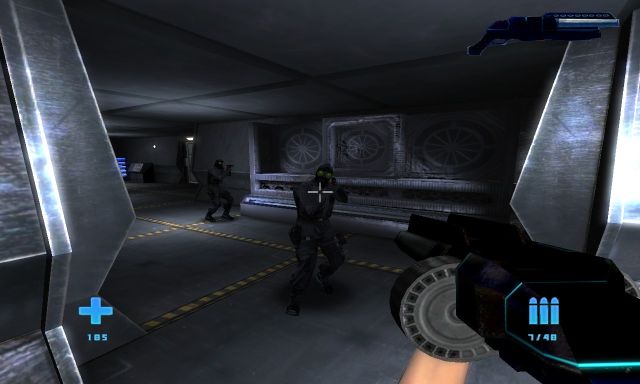 As you advance, it becomes clear that this isn't purely a scary affair. You'll pick up a shotgun, machine gun, rifle and eventually a grenade launcher, then start fighting off armed goons, AI-driven robots and agile, armored women. One other thing also becomes apparent: the opposition is dumber than an army of bricks. For instance, you'll venture into a room and start shooting a foe, and he'll turn the opposite direction and patrol the area while you fill his body with bullets. Hell, sometimes his cohorts will do this mere seconds after they were shooting at you, as if they'd instantly forgotten they were locked in combat. Thankfully, this phenomenon doesn't always occur, and your opponents typically perform as they should. However, it transpires often enough that it's a definite problem.

Really, that's not even the dumbest thing your adversaries have to offer. Sometimes you'll encounter enemies positioned on catwalks, obviously put there to rain ammo down on you. Instead, they shoot the wall across from them ineffectively. Another couple of segments feature grenade-toting dudes who lob explosives either well past you or into the wall--basically, anywhere but the space you occupy. Meanwhile, they graciously accept the rifle bullets or lasers you offer them.

And oh, you'll have plenty of ammunition to give them. You'll find ammo pretty much everywhere, and never even come close to running out. On top of that, your bullet capacity is well beyond ridiculous. For instance, I ended my own playthrough with over fifteen hundred submachine gun bullets, and this was after using that weapon for a good portion of the campaign. 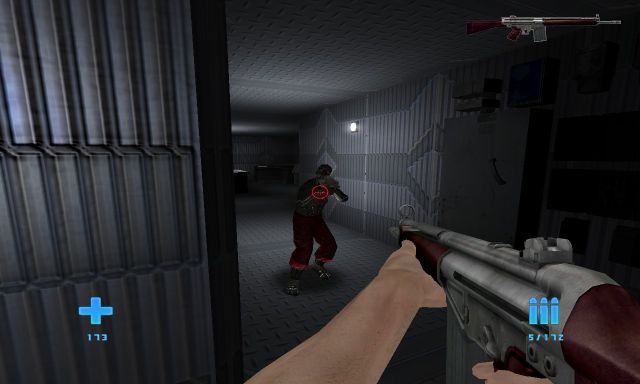 To this title's credit, it provides you with a fairly diverse arsenal. Unfortunately, the one weapon you might count on to kick ass actually blows: the grenade launcher. Mainly, you have to land a shot right on top of your opponents in order to actually harm them. Now and then the gun's splash damage might function properly, but most of the time your targets shrug it off as if you hit them with a water balloon rather than a grenade.

This issue only presents a minor setback, though. For the most part, Insincere proves to be an easy affair with only a couple of troublesome levels. Pretty much every stage consists of basic hallways and the occasional wide open area, filled with only a handful of foes that fall quickly. Most levels finish within minutes, and feel more like mere segments of stages. Hell, the campaign as a whole only lasts about two hours tops, with twenty-two levels on offer.

You might wonder why I've been avoiding story discussion up to this point, and the truth is I really don't know how the tale plays out. Cutscenes never loaded properly for me, and I only know the game has cinematic segments because I watched a walkthrough on YouTube. I had a sneaking suspicion that I was missing them because the action would occasionally stop, giving way to a completely blank screen. The music continued, so I knew the program hadn't crashed. I'd wait to see if anything would happen, but my screen showed nothing but pitch blackness. I'd click and suddenly be back in the fray. Checking YouTube confirmed the worry that I had been unwittingly skipping the story all along. 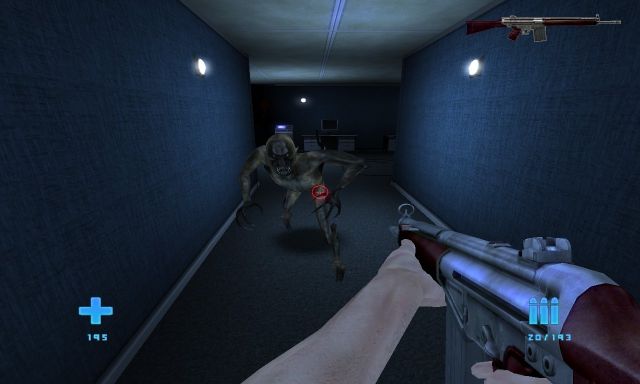 It was weird because Joseph would say things outside of cutscenes that indicated storyline progression, mentioning characters and concepts I hadn't experienced. That was when I realized I'd been missing plot beats. By that point, I was already halfway through the campaign and just said screw it. Unfortunately, without the context, the final battle didn't have the climactic build that it probably would've had otherwise. That didn't matter anyway, because the final boss is just as idiotic as his cronies and keeled over after just a few laser blasts to the dome.

Insincere may ooze camp, but its charm fails to mask its major missteps. Part of its problems could stem from its engine, FPS Maker, as a lot of games I've played that were made with that software ran like garbage. Unlike your average FPS Maker fare, though, this one seemed to have more thought and effort behind it. Sadly, its creativity is stifled by its poor enemy AI and numerous glitches. Perhaps one day we can see revamped version of this offering, decked out with the same '80s sci-fi trappings, but with improved mechanics and fewer crashes. I'd appreciate that...
1.5/5

If you enjoyed this Insincere review, you're encouraged to discuss it with the author and with other members of the site's community. If you don't already have an HonestGamers account, you can sign up for one in a snap. Thank you for reading!

© 1998-2021 HonestGamers
None of the material contained within this site may be reproduced in any conceivable fashion without permission from the author(s) of said material. This site is not sponsored or endorsed by Nintendo, Sega, Sony, Microsoft, or any other such party. Insincere is a registered trademark of its copyright holder. This site makes no claim to Insincere, its characters, screenshots, artwork, music, or any intellectual property contained within. Opinions expressed on this site do not necessarily represent the opinion of site staff or sponsors. Staff and freelance reviews are typically written based on time spent with a retail review copy or review key for the game that is provided by its publisher.