In the early going, Dishonored wasn't making a particularly great impression on me. Protagonist Corvo returns from a mission to make his report to his empress, only for her to be assassinated right in front of his eyes. Making matters worse: the deed's conspirators frame him for the crime, allowing them to take power in the city of Dunwell, with Corvo stuck rotting in the local dungeon to await execution. Fortunately, some members of the nobility weren't involved with this plan and aren't exactly in favor of its results. While unable to act openly, they are able to provide Corvo a tiny amount of help in attempting to break free of imprisonment.

After doing so, Corvo will meet with a mysterious figure only known as the Outsider, who takes enough interest in the man to confer mystical powers upon him to augment his already formidable abilities. From there, he will embark on a series of missions to rescue Emily, the heir to the throne, while also eliminating all those responsible for the empress' death.

But before you meet the Outsider and start gaining those powers, you have to escape jail with only Corvo's natural abilities in combat and stealth. And I found things to be tedious and a bit annoying in ways that involved lots of trial-and-error and save-scumming. I mean, I didn't have to worry about collateral damage, but being a very visible, kill-crazy assassin does have a negative effect on this game's morality system, so if you're going for the "low chaos" ending, you'll want to find ways to non-lethally take down as many enemy soldiers as possible while not being discovered by their patrols. And so, there I was, with nothing but Corvo's natural stealth skills, sneaking around a large prison to incapacitate guards and hide their unconscious bodies while hoping no one caught onto my actions and forced a more violent outcome. And doing this all from a first-person viewpoint, which took a while to get used to, considering that previous stealth-oriented games I've played had used a third-person perspective. 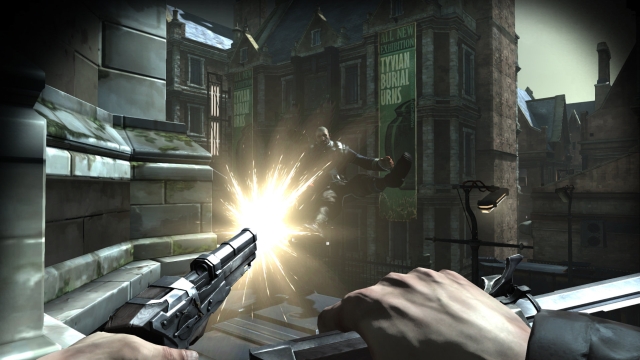 While analyzing patrol patterns and moving cautiously might be fun for some people, I've never been huge into stealth games, unless there's some sort of cool addition to that formula. Fortunately, after that annoying stage, that addition is, uh, added to the mix, as Corvo encounters the Outsider shortly after meeting up with the resistance faction. A bit of conversation later and you'll now have the Blink ability, which allows you to teleport short distances. Suddenly, that stealth becomes a fair bit more enjoyable. If you're standing on a ledge and see a lone guard patrolling below, you can Blink down, choke him out and pick him up, Blink back up and secure the body in a dark corner in mere seconds.

And Blink isn't the only power the Outsider can bestow. Collect the Runes hidden throughout the game's nine levels and you'll be able to unlock all sorts of abilities. Some, like being able to see enemies through walls, or the capability to possess rats and fish to squeeze through tiny spaces also aid in getting around unseen. For occasions when murder might be the only solution, there's a skill that causes bodies to disintegrate, so there's nothing left for guards to notice. And, if you decide you simply don't care about preserving life, you can always summon a swarm of ravenous rats to devour anyone unlucky enough to get in your path or call up a blast of wind to send them plummeting off high places.

However, no matter how much you do feel the urge to start killing, killing them all, be forewarned that edging the chaos meter from low to high will do more than simply determine what condition Dunwell is in when you've beaten the game and gotten your ending. The city is struggling from the combination of a rat-derived plague that turns infected into feral zombies known as Weepers; as well as draconian laws set by its rulers in an attempt to contain the disease's damage. Go around and kill indiscriminately in a level and, when it's time to tackle the next one, you'll likely find more Weepers and deadly clusters of rats, as well as even more guards. 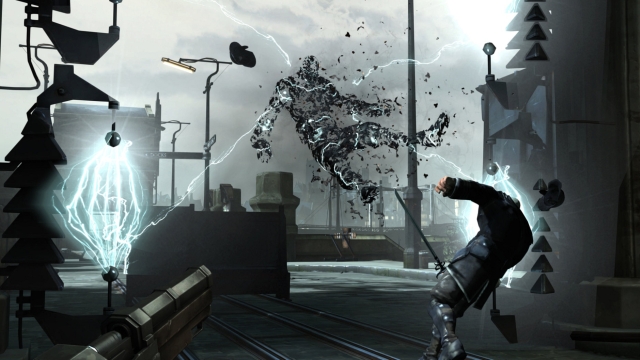 This provides an interesting balance. It's often easier to kill the opposition than it is to find a way to neutralize them non-lethally, but by relying on murder, you'll set yourself up with more resistance in the future. While Corvo's sword can be supplemented with a number of other weapons, ranging from crossbows to guns to grenades, ammo tends to be found in very limited quantities and often needs purchased with money obtained via finding valuable items strewn throughout each level. Of course, that money also can go towards buying upgrades to your weaponry, medicine and other necessities, so unless you're planning to dedicate hours towards scouring every inch of every level, you'll still have to be a smart spender.

Then again, exploring these levels is one of the main appeals of Dishonored. After breaking out of jail, you'll embark on a few levels where you're quested to take out the key people involved in the empress-killing conspiracy. Each time, you'll be taken by boat to a location reasonably close to your quarry and have to make it through the city to reach that place. You'll marvel at all the different paths a player can take to achieve their goal. If you see a lot of guards patrolling the streets, you can Blink your way up to the rooftops and run past them completely unobserved. The city has all sorts of machinery used to dispose of intruders, so you can sneak up to their control panels and re-wire them to ignore you and be lethal to guards. There are all sorts of grates and holes way too small for Corvo to fit throughunless he's possessing a rat.

And that diversity extends to how you complete your objectives. While a mission's goal might be to kill your quarry, a careful player will find non-lethal ways to dispose of them to help keep the chaos low. One early game mission sends you after a pair of loutish young lords who are taking care of business at the local brothel. You could simply storm the place, leaving bodies in your wake until you've hunted the duo down and sent them to their gravesor you could do things a bit differently. If you do an errand for a local crime boss, he'll offer to abduct them and enslave them in their own mines if you're kind enough to shake down a wealthy art dealer who also frequents the cathouse. While killing them will raise the chaos, disposing of them in that way merely results in a number of "Missing Person" posters with their faces plastered on them sprouting around the city. 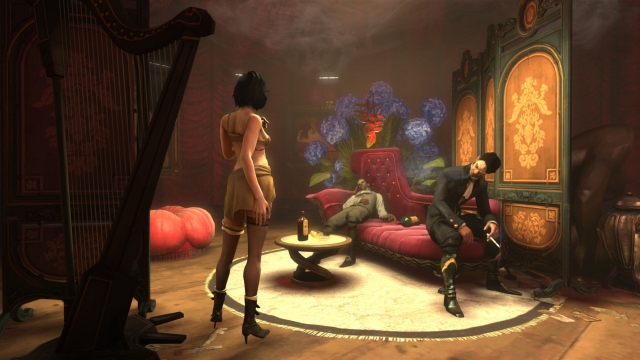 Take away that tedious first stage and Dishonored would almost be a perfect experience. While it's a pretty short game, that is balanced out by the intricate nature of many of its stages and how the variety of ways you can complete objectives gives it great replay value. The thing keeping it from being a near-perfect experience was simply feeling that, while the game does try to steer you towards low chaos by giving you a more optimistic ending, it was hard to deny that things are more fun when you just don't give a damn. If you're working for low chaos, you're using a bunch of abilities that help you maneuver unseen. If you're not worried about that, you can delve into your skills to find fun and creative ways to slaughter hapless guards. Send a swarm of rats at them, Windblast them off ledges, stop time and chop their heads off while they're helplessly frozen in place -- all of which is more entertaining than learning patrol routes, sneaking up on guards to choke them out and then having to hide the body so no one gets worried about minor things such as a bunch of unconscious people littering the streets. Overall, I'd have preferred it if the non-lethal ways were as enjoyable to perform as the murderous ones.

But that's part of the replay value: Finding new ways to play through old levels to allow a fun game to remain as enjoyable the fifth time through as it was the first. I could harp on Dishonored's slow start or how it's more fun to be a vicious killer than a benevolent avenging angel, but I still got a lot of enjoyment from this game. While stealth isn't really my thing, I have to admit that I got into the cerebral nature of outmaneuvering guards to progress closer and closer to my quarry with them blissfully unaware of the doom awaiting them. And, frankly, if having a blast bringing doom to others isn't what makes gaming awesome, I don't want to know what is.
4/5

© 1998-2021 HonestGamers
None of the material contained within this site may be reproduced in any conceivable fashion without permission from the author(s) of said material. This site is not sponsored or endorsed by Nintendo, Sega, Sony, Microsoft, or any other such party. Dishonored is a registered trademark of its copyright holder. This site makes no claim to Dishonored, its characters, screenshots, artwork, music, or any intellectual property contained within. Opinions expressed on this site do not necessarily represent the opinion of site staff or sponsors. Staff and freelance reviews are typically written based on time spent with a retail review copy or review key for the game that is provided by its publisher.