Knack is a perfectly adequate action game released extremely early in the PlayStation 4's lifespan. Is that an exciting way to open a discussion of it? No, but if we're being honest -- a good idea when writing for a site with that word in its name -- Knack is better described as competent than exciting, so that intro is a fitting one.

After playing through it and spending a couple weeks attempting to turn my feelings about the game into something resembling coherent thought, I decided that where Knack is most successful is in its overall presentation. The cutscenes reminded me of something akin to a Pixar film and the plot followed suit. You'll control Knack, the ultimate creation of respected inventor Doctor Vargas. Knack's default form is a tiny, humanoid creature whose body is made from mystical items known as Relics. What makes him special is that he also works as a magnet for Relics, which allows him to draw them into his body to become larger and more powerful.

And that power will be necessary. While this game's world is very modern, if not a bit futuristic, it has issues that seem lifted from a medieval fantasy. Namely a large tribe of Goblins who are furious about being displaced from their former habitats by humans and somehow have gotten their hands on some of that sweet, sweet Relic power to create their own array of tanks, airships and other weaponry. Vargas recruits a few people to help get to the bottom of the Goblin threat, with Knack doing the heavy lifting, of course. But some of those allies are a bit less than trustworthy, as mega-rich industrialist Victor and his femme fatale sidekick, Katrina, have their own goals that might not necessarily coincide with the doctor's. 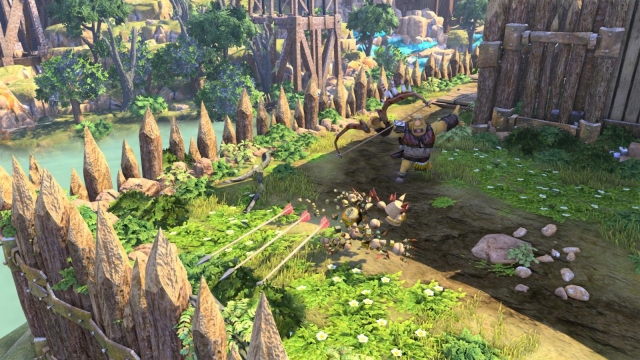 That plot offers the foundation for 13 levels of platforming and brawling. Each of those levels is divided into a handful of stages that greatly vary in length. Some only consist of a boss fight, while others can easily take 15 or more minutes to traverse. There is a good amount of variety in the locations Knack will find himself in, as you'll go through caves, forests, castles, mines, fortresses, airships, ruins and more.

One of the main gameplay features is Knack's ability to grow via absorbing relics. Caches of them are scattered around each stage to serve multiple purposes: replenishing lost health, extending his life bar and causing him to gradually grow in size. The larger Knack gets, the more powerful he becomes. An enemy that initially took two or three hits to flatten will now go down with one punch, while he'll also be able to survive previously-deadly attacks.

Overall, this is a fun and breezy game that fits nicely into that "parts might be challenging, but on the default difficulty, you shouldn't have too many problems" zone, but one big flaw prevents it from moving past adequacy and becoming something potentially special. Simply put, this is one repetitive game.

Regardless of what size Knack is, your main attacks are either punching enemies or jump-kicking them. By smashing yellow crystals known as Sunstones, you can access three special attacks, but you won't get enough Sunstone power in this game for those moves to be major parts of your repertoire. They're the sort of attacks you save for those situations where you're in a battle with multiple powerhouse enemies -- the sort even an oversized Knack might find formidable.

And even though the game's 13 levels have a great deal of variety as far as appearance goes, they sure don't play all that differently. You'll follow a long, winding and quite linear path where you get into fights with regularity and occasionally get a brief cutscene to move the action from one place to another. You'll start each level tiny and gradually grow through each stage before shrinking back down to default size by the end in order to start the process again in the next level. 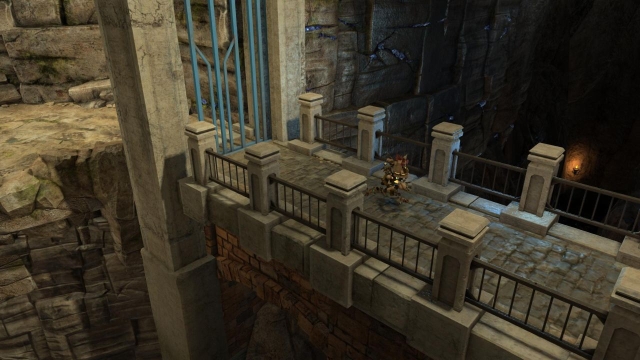 Every once in a while, you might get a fun gimmick, but those are few and far between. Quite the shame, really. Having Knack absorb ice and need to quickly move through sunny areas before the heat melts off his additional bulk, or add hunks of metal to his body and have to avoid magnets to keep them attached to him were nice additions to the formula -- they were just under-utilized while most levels just blended into each other.

When a game winds up feeling repetitive to the degree that nearly everything just sort of melds together into one big blob of adequacy, no amount of minor additions can truly salvage things, even if they are nice touches. By finding hidden rooms scattered throughout the game, you can acquire all sorts of useful goodies. Parts of machinery that, when completed, can bestow Knack with various boosts, such as getting more powerful attacks the longer he can beat up enemies without taking any damage himself, were a fun addition. You also can get crystals of various colors. Collect enough of any particular color and you'll be able to unlock new versions of Knack, each with its own special abilities. The sort of thing that's great for adding replay value to a game, as you'll be able to go through the action again with an alternate version of the hero.

Which is all well and goodif you actually are inclined to pick this one up repeatedly. For me, Knack defines "play it once" disposable entertainment. I really enjoyed its presentation, thinking it was a pretty game with a fun story that was mostly light-hearted, but with enough bite to provide a bit of drama. And everything was fundamentally sound and reasonably enjoyable to play. But it also was a repetitive game where I found myself usually only able to go through a stage or two at a time before feeling the need to play something different. There's only so many times I can use the same punches and jump kicks on the same goblins, robots and guards while going through levels that mostly play out the exact same regardless of how varied their environments are. A bit more diversity in Knack's repertoire would have gone a long way, but as it is, his adventure is merely adequate -- a good rainy-day time-waster, but not much more.

If you enjoyed this Knack review, you're encouraged to discuss it with the author and with other members of the site's community. If you don't already have an HonestGamers account, you can sign up for one in a snap. Thank you for reading!

© 1998-2021 HonestGamers
None of the material contained within this site may be reproduced in any conceivable fashion without permission from the author(s) of said material. This site is not sponsored or endorsed by Nintendo, Sega, Sony, Microsoft, or any other such party. Knack is a registered trademark of its copyright holder. This site makes no claim to Knack, its characters, screenshots, artwork, music, or any intellectual property contained within. Opinions expressed on this site do not necessarily represent the opinion of site staff or sponsors. Staff and freelance reviews are typically written based on time spent with a retail review copy or review key for the game that is provided by its publisher.