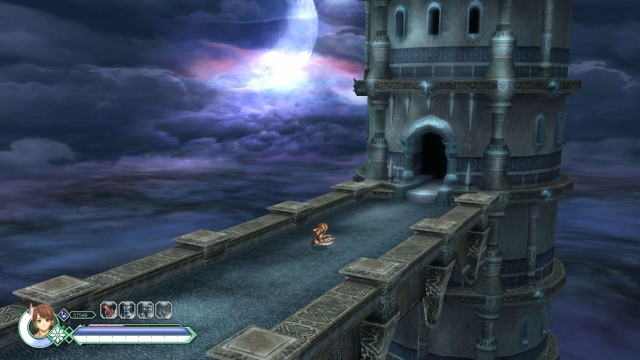 Ys Origin's basic setup sounds disappointing, but the game surprisingly squeaks out a win. At a glance, this is an action-RPG taking the form of a linear dungeon crawler (don't worry, there's no procedural generation), all transpiring within a single dungeon , a la original Diablo. You might expect a piece like this to offer a lot of quick combat, tons of loot and in-depth customization, but only the first of those three features appears here. In reality, you don't get much control over your chosen character's development, as you only receive very little exchangeable equipment and basic perks (called "blessings"), which you can purchase at save points.

On top of that, the game is more plot-heavy than your average J-RPG. Here, you bump into the supporting cast frequently and engage them in drawn-out conversations, or repeatedly return to the hub to ask someone a question or report your findings. Yes, I realize roleplaying games are typically front-loaded with plot, but this one's cutscenes drag on well after they've made their point. It also doesn't help that two of the three playable characters have fairly identical campaigns, and that you often see the same segments play out with only slight alterations to the chatter involved. Thankfully, you can fast forward or even skip most cutscenes, so this issue is trifling at worst.

Really, that can be said about almost all of this adventure's issues. They're merely minor setbacks or negligible in comparison to the experience as a whole. This game isn't really about deep exploration, complicated character building or fleshing out a fantasy world that's already been established with various other titles. Rather, it focuses on making full use of what little content it offers. Every room you walk into serves a purpose, every corner you turn offers some bit or detail to challenge or excite you, be it a new type of obstacle or a gauntlet requiring more than mere fighting prowess. You might battle your way through a teleporter maze, negotiate a sandy slope filled with grinding wheels, or take a swim through a submerged hallway filled with devious currents and boatloads of spikes. No gimmick or device reappears after you've been through it, and every challenge feels unique as a result. 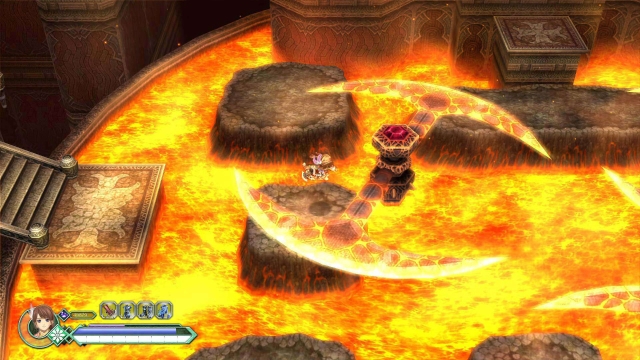 Although I stated that this installment is linear, that's not to say it doesn't occasionally branch or offer some exploration. Pathways do eventually split into extra side routes to check out, but they usually consists of an extra corridor or two. You won't often spend ages devoting yourself to one route, only to realize you need to tediously backtrack. It also helps that you can instantly teleport to old save points, even in the middle of a fight. Granted, you won't see a Metroid level of complexity in regards to stage design, but it's nice to not have to spend ages retracing your steps.

Of course, the game does sometimes hide necessary goods in such tricky locations that you might spend some time combing a particular area. For instance, a demonic curse prevents you from opening a certain massive gate. If you didn't make a thorough enough search of the area just before reaching this barrier, then you missed an ominous ring tucked into a nearly unseen corner, which gets you through the aforementioned barrier. Upon receiving it, you'll still need to locate a couple of other items and use some logic before finally completing this segment, thankful you got a break from the constant button mashing.

Yeah, I said it. Success in this RPG often boils down to how quickly you can smash buttons while trying to keep a fair distance from your foes. You initially get a choice of two characters: Yunica Tovah and Hugo Fact. Yunica's campaign is your standard hack 'n slash romp, where you chop monsters up with a battle axe. Sure, you bump into environmental obstacles that keep the party lively, like massive rotating blades, quicksand, lava, slick surfaces and all of the other usual suspects. All the same, Yunica's combat involves either hitting the attack button as much as possible or using one of her three special skills to exploit a foe's weakness. For instance, some enemies boast meatier defenses than their peers, and thus require a bolt of lightning to get penetrate their carapaces. 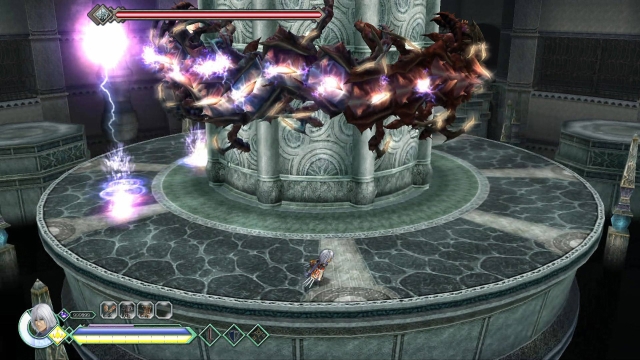 Honestly, I had fun with Yunica during my recent playthrough. Her journey was action-packed and actually quite challenging at times, plus her storyline--though somewhat hackneyed--was ultimately fulfilling. Of course, this being an RPG, challenge was relative to my level, and certain trials became mere afterthoughts with enough grinding. This was especially true of bosses, as even gaining a few levels rendered their attacks so ineffective that I could play like absolute garbage and still win with hit points to spare. That left me a little ambivalent, because on one hand bosses became anticlimactic and were really just larger enemies that refused to die so quickly. On the other hand, (again, this being an RPG) if I put in the work toward building my character up, I should see results, and boy did I ever see them...

Impressively, Hugo's campaign completely alters the game's mechanics. Rather than carving up his opponents, Mr. Fact hangs back and blasts them with a pair of floating artifacts called "The Eyes of Fact." The experience transforms into a top-down shooter of sorts, not unlike old school Gauntlet, minus the monster nests. Hugo is less about charging into the fray and cutting loose, and more about figuring out ways to keep distance between you and your adversaries, while also dodging their reprisals.

Origin's world design and enemies mostly lend themselves to these two sub-genres. Mostly. Sadly, some portions of the proceedings don't mesh well with either of these styles of play, and it really shows. For instance, a few of the demons you fight early on were obviously created with Yunica in mind because they only react when you approach them. When Hugo blasts them from afar, they don't seem to know what to do and simply stand there and accept their murders. Similarly, some of the boss encounters don't work well with Yunica because they feature bullet hell elements that would work better in a shooter. You know, like Hugo's campaign... 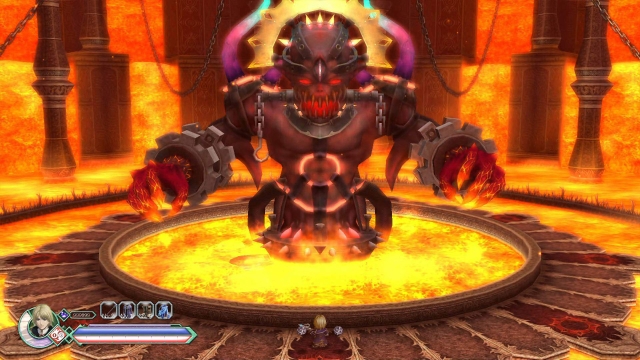 Both quests are worth the effort, though. Finishing the game with the preliminary heroes unlocks a secret third character who plays more like a rogue, what with his swift movement, lower damage output per blow and intense strike speed. Here's the real kicker, though: his campaign is the canonized one. In other words, Yunica's and Hugo's quests are mere side stories meant to familiarize you with the tale's cast, and the true tale lies within an unlockable playthrough. That sounds awfully underhanded, but this third campaign is a breeze compared to the other two, plus it features plot- and character-related revelations that never came to light before...

The complaints I shared early in this review became a passing memory by the time I started Hugo's campaign, and all but vanished when I finished the third character's. Ys Origin is less about world building and poring over a character sheet, and more about abiding a "less is more" sort of sentiment. While my gripes might sound like limitations, they're actually wise omissions. I wouldn't want to have to pound through a forty hour rolepaying campaign with two characters just to unlock another forty hour campaign that happens to be canon. This may not be the best, deepest or most adventurous Ys entry, but it's no less entertaining or satisfying.

© 1998-2021 HonestGamers
None of the material contained within this site may be reproduced in any conceivable fashion without permission from the author(s) of said material. This site is not sponsored or endorsed by Nintendo, Sega, Sony, Microsoft, or any other such party. Ys Origin is a registered trademark of its copyright holder. This site makes no claim to Ys Origin, its characters, screenshots, artwork, music, or any intellectual property contained within. Opinions expressed on this site do not necessarily represent the opinion of site staff or sponsors. Staff and freelance reviews are typically written based on time spent with a retail review copy or review key for the game that is provided by its publisher.