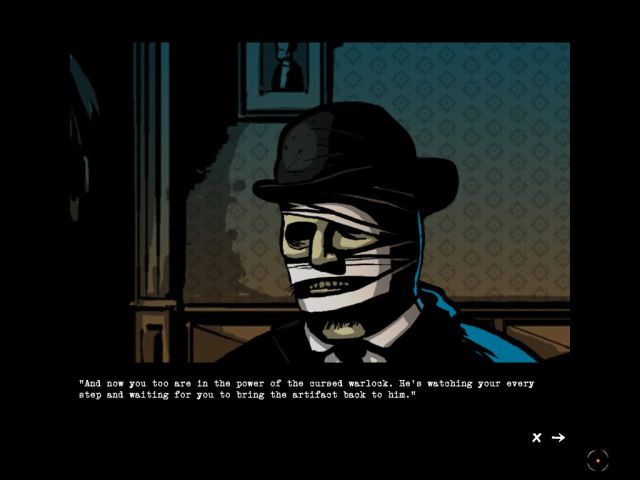 Larva Mortus's elevator pitch sounded like a bloody good time. Imagine: procedurally generated mazes presented in top-down perspective, full of monsters that you blast to bloody bits, plus RPG elements, Lovecraftian trappings and an impressive collection of firearms. Think of it as Doom meets Rogue, with a hint of Smash T.V.. Okay, so in 2020 that premise sounds pretty hackneyed, but circa 2011 it seemed like simple, addictive butchery. A title like this should've been an action-packed banger of a dungeon crawler, with enough gory combat and surprises to keep you up until the wee hours of the morning.

Sadly, my sessions hardly lasted a single mission at a time...

The affair starts you off with only a sword and a revolver against your average bats, spiders and skeletons. You roam through straightforward dungeons, comprised of interconnected rooms that sometimes hold traps or destructible bits of environment, the latter of which leave behind ammo or power-ups when destroyed. Nabbing those grants you the usual temporary power ups, such as invincibility, extra damage and double experience. Though these goodies don't sound so special, they prove to be invaluable when the difficulty rating cranks up to nearly overwhelming levels.

You won't find much to complain about in the early outs. You battle plenty of moderate-sized hordes, regularly collect new weapons (e.g. a shotgun, a machine gun, a flamethrower, etc.) that you can seamlessly exchange. You gain levels at moderate pace, allocate a single skill point per level gained and watch your character develop into a faster, tougher, luckier and stabbier monster hunter. In other words, this is your run of the mill, overhead shooter with randomly crafted stages that you can find pretty much anywhere on the internet these days, except this one occasionally tries to spook you with giant, creepy faces or colonies of bats that intermittently appear on the screen. 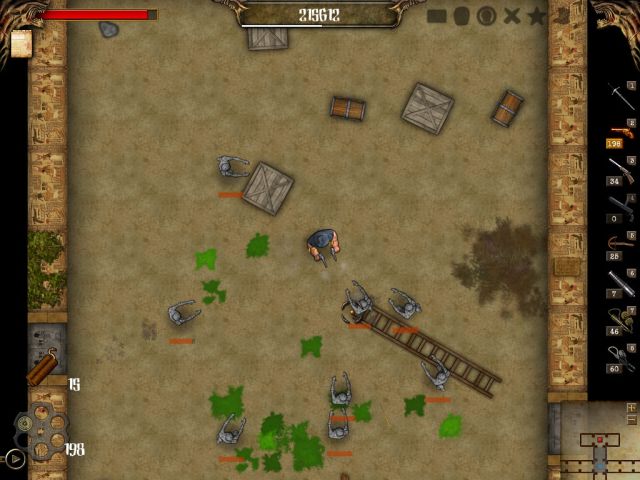 However, you might notice that something seems off and you don't know just what it is. Granted, the game exudes a lot of cheesy qualities, such as its drab visuals and flickering environments. Plus, character models resemble those seen in flash titles of yore, giving the game an awfully dated, early 2000s vibe. While those factor present issues, they're not the defining flaw. If you're like me, you'll try to shake off that underlying sensation of disappointment, though you know it'll come into the light eventually.

So you press on, completing the occasional randomly created side quest that asks you to rescue civilians or eliminate champion monsters or break curses by destroying inverted pentagrams found throughout a dungeon. The further you advance the campaign, though, the more often the forces of evil defeat you. You chalk up your early loses to lack of skill or unfortunate circumstances, but eventually you begin to realize you're sometimes getting screwed over by the hand the game deals you. And with each plot stage completed, the difficulty rating increases until you run afoul of all manner of cheap situations where you have almost no chance of survival.

You see, sometimes you receive a pretty sweet setup. You enter a ton of rooms populated by weak enemies you can scotch without a second thought. Bugs and zombies fall to your superior firepower and blade slinging, and even bigger baddies like demons and frosty ghosts aren't much of a match for your explosive cannon or electrocuting claw. However, sometimes you enter a room where you can't not> die, and you only throw your arms up in exasperation as your effort crumbles to dust. For instance, you might power through a fair portion of one level, only to enter a tightly confined room where fire-shooting traps lie everywhere, combined with vampires who swiftly fly all about the premises. No matter where you stand, you either get singed or bashed, and you're dead before you know it. The game has no consideration for the hazards you face in relation to a room's size. 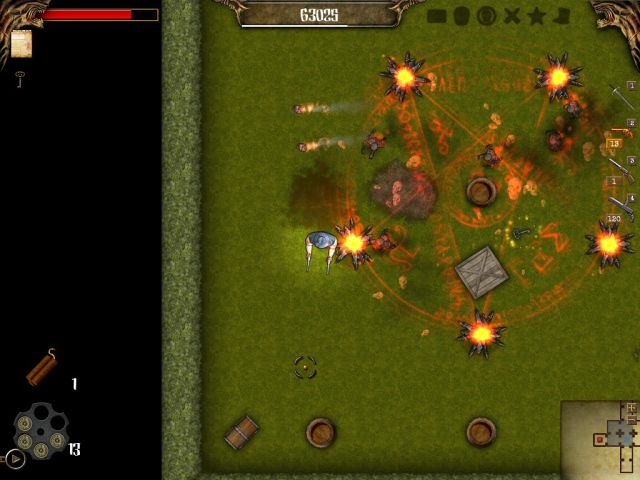 Later in the proceedings, you also fight some ghostly knights who protect a relic. These guys not only summon smaller warriors who constantly pursue you at top speed, but they also hit you with unexpected lasers and explosions that appear at the drop of a hat, sometimes right on top of you before you can even react. If you aren't quick with your flamethrower, these dudes can wreck you before you so much as blink.

And yet, the cheapness can also be stacked in your favor, mostly because of some giant Zelda-esque bladed traps that move back and forth. These puppies harm anything that touches them, including foes. They slice whole hordes of monsters to ribbons in seconds, sometimes allowing you to do nothing but stand still to emerge victorious in a room. I've even had these things spawn in the aforementioned cursed rooms with the pentagrams, where the traps destroyed some of the portions of the symbol for me.

Here's the real kick in the crotch, though: once you've gotten maybe one-third of the way through the campaign, you've pretty much seen it all. Granted, you do battle some new foes now and then, but you can deal with most of them by simply running in a semi-circle and barraging them with bullets--provided that you're lucky enough to receive a chamber that allows you to do so. The experience grows tiresome by the time you've reached the halfway mark, because it's all so mindless and repetitive. Enter a room, kill the monsters, go to the next room, kill more monsters (sometimes with the blade or fire traps present), repeat the process as long as you don't get totally boned by circumstance. 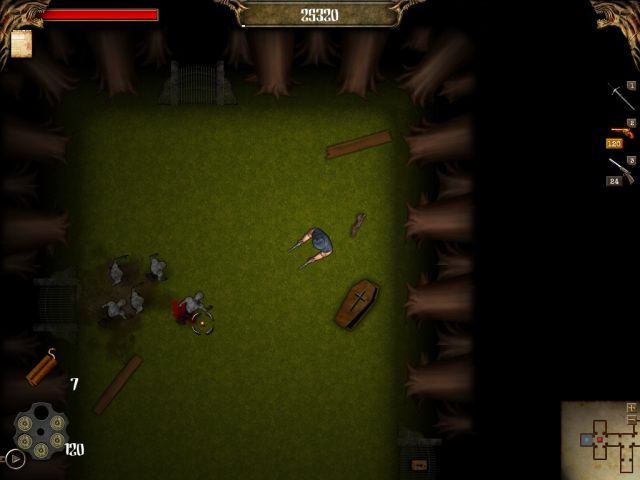 Of course, that rigmarole only rings true when all of the enemies in a given room actually spawn. Whenever you slay all of the beasts in a room, it becomes "cleared," meaning adversaries will not spawn there again. Sometimes, you need to clear rooms because certain areas lock the doors and inundate you with creatures until you've vanquished every last one of them. However, now and then you run into a skeleton or a zombie that gets stuck outside the room and can't enter. In ordinary chambers, you can just exit and re-enter to reset the battle. However, in locked rooms, you become trapped until you manually exit out and restart the whole level. This sometimes occurs after you've put a lot of effort into staying awake completing a fair portion of a stage. Although this issue doesn't occur frequently, it happens often enough to be a bother.

Larva Mortus could've been a solid blend of dungeon crawler and shooter, had it accomplished more than providing the same experience throughout its campaign. To top it all off, its cheapness, dated visuals and occasional glitches prevent it from attaining even mediocre status. Rather, this is a sub-par action-horror offering that you probably didn't know existed, and you're honestly better off that way.

If you enjoyed this Larva Mortus review, you're encouraged to discuss it with the author and with other members of the site's community. If you don't already have an HonestGamers account, you can sign up for one in a snap. Thank you for reading!

© 1998-2021 HonestGamers
None of the material contained within this site may be reproduced in any conceivable fashion without permission from the author(s) of said material. This site is not sponsored or endorsed by Nintendo, Sega, Sony, Microsoft, or any other such party. Larva Mortus is a registered trademark of its copyright holder. This site makes no claim to Larva Mortus, its characters, screenshots, artwork, music, or any intellectual property contained within. Opinions expressed on this site do not necessarily represent the opinion of site staff or sponsors. Staff and freelance reviews are typically written based on time spent with a retail review copy or review key for the game that is provided by its publisher.