Lets talk about medieval times as portrayed in video games. In them, you are almost exclusively a noble knight fighting for honour, for king, and perhaps a lady's hand. Occasionally, youre a wizard that can tear reality asunder with a few well chosen ancient words formed when the world was still young. Rarely, if ever, is the world torn from childish fantasy and portrayed as the dung-filled hellhole it probably was; a world where the nobles get their jollies by being colossal douchebags to the downtrodden filthy peasants. Where marital abuse is the acceptable norm, and witches getting burned on a stake for having good personal hygiene is as common as the sun rising in the morning.

The Witcher, based on a well known series of polish fantasy books by Andrzej Sapkowski, takes this, more "realistic" route in portraying the continent of Temeria, and its denizens. Geralt, our platinum-haired hero is one of these witchers, a monster hunter with amazing combat prowess, insane reflexes, alchemical abilities and magical powers surpassing those of mortal men. Turns out, hes amazingly good at his job, which he demonstrates almost instantly by taming a wild princess-turned-werewolf-turned-princess in the beautifully made opening cut-scene.

However, no matter how good Geralt is, by the game's prologue he seems to have suffered a mortal wound at one point in his monster hunting career, and the game opens up with him being taken to Kaer Morhen, an ancient keep that now serves as the camp and training grounds of what few witchers still exist. Apparently, he miraculously survived, all at the cost of his own, never-before-seen-in-a-game plot device -- he forfeits his memory. 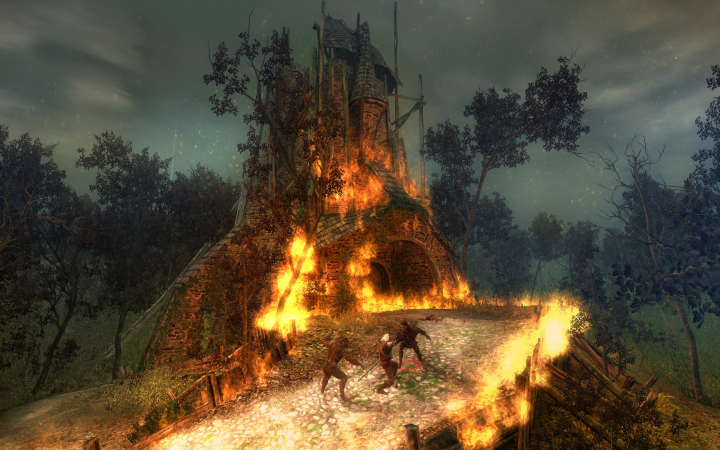 Geralt won't have much time to marvel at the beautiful keep, ask many questions of his brethren or gaze at the beautiful sorceress, Triss Merrigold, nor unleashing his healthy appetite for beautiful women. The keep is attacked by cock-blocking rogues, assassins and bandits.

Though he can handle several weapons, Geralts default badassery comes compliments of a broadsword and a number of combative stances. One of the first enemies that attacks you is a hulking overly-tattooed guy with a large sword and more muscle mass than brains. However, due to him being all brawn, and no grace, Geralt's best bet is to adopt a Strong stance, which supports slow, powerful hits that demolish clumsy enemies unable to dodge in a short time. Meaning, that moments later when he is attacked by ninja-like rogues, this stance will slice into nothing but air. But should you change into a Quick stance, Geralt will become a dervish of destruction, displaying acrobatic feats worthy of a circus performer, while his blade will cut apart the speedy foes in front of you. Theres also the Group style, where. Geralt will spin his sword in a fancy way, slicing weaker pack-focused foes to ribbons.

These enemies shield a mysterious wizard harnessing the power of fire who makes short work out of Geralt and comrades before disappearing with a valuable artefact vital for mystic witcher training. Being the best survivor his clan have to offer, even though suffering genre-obligatory amnesia, Geralt is sent to find, and punish the wizard and his minions for attacking Kaer Morhen.

So, Geralt will travel across the breathtakingly beautiful Temeria, beating up miscreants and wooing ladies across the land, while you marvel at the level of detail placed on the scenery that surrounds him, from villages to castles, from towns to the countryside. Be it in damp and filthy sewers, or travelling through wheatfields filled with flowers and growth, Geralt will, in his search, meet many obstacles, but also allies, if he so wishes. 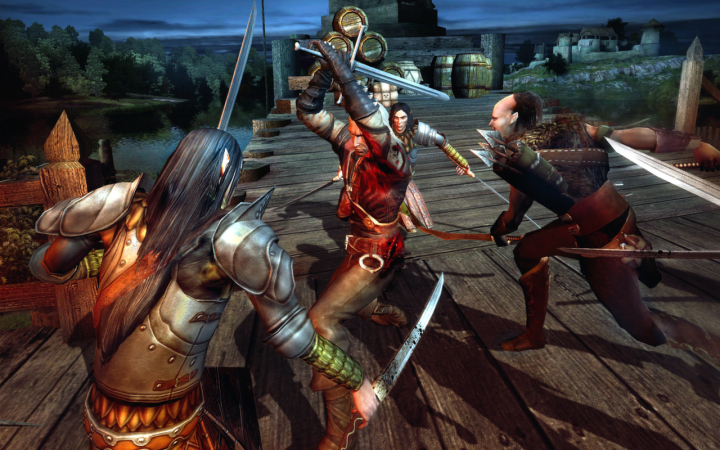 One of the stronger points of The Witcher is its alignment grid, which will change, depending on your choices throughout the game. Did you decide to save a witch from the mob's intent of killing her or did you side with the mob? Did you join your brother-in-arms witcher during the assault on the keep, or did you serve as a bodyguard to a sorceress as her white knight? Did you allow the freedom fighters access to a hidden cache of weapons to aid their struggle against oppression, or did you take the job of keeping them out? All of the choices you make will come back at a later point, to influence the further progress of Geralt's life and adventures.

A vital part of a witcher' s life is his alchemical training. While witchers are death machines on their own, its their knowledge of the beasts they are fighting that makes them so effective. By learning about them through books or people that you do favours for, Geralt will learn about the anatomical pieces or herbs that he could use to brew a good potion to enhance his abilities, a bomb that could be used as a trap for his enemies, or oils to be administered on his weapons to increase their effectiveness. For instance, some of the potions allow him to see in the dark over long distances, or perhaps a potion that increases his reflexes to such a level that everything around him seems as if it were moving in slow motion. Each potion carries a certain toxicity level in them which will, if consumed in great quantities lead to your demise, but it is a price to be paid for great power. Learning how to utilise these potions is not an added convenience but rather the only way to survive, especially on higher difficulties.

As Geralt travels, he'll become more powerful, his experiences teaching him new combat maneuvers, spells that will aid him in combat, ranging from a "force push" like spell which, when discovered will basically clear a path in front of Geralt, but with added training will allow him to daze his opponents long enough so he can kill them in one shot, or the always handy fireball spell, which will torch everything in front of Geralt, for the enthusiastic pyromaniacs in all of us. 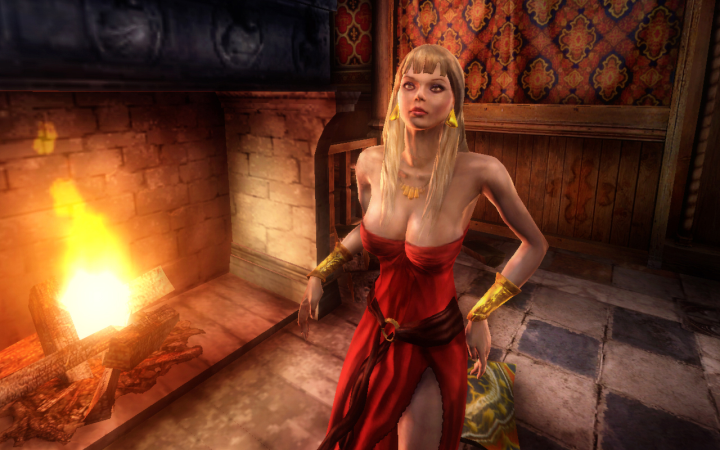 However, not everything is as beautiful and awesome as you might be led to believe. The Witcher suffers from the well known condition of "Scaling Greatness". What it means, is that, when you first start your journey, you'll have to collect your jaw from the floor at how pretty the game looks, how fluid the cut-scenes play out, and how well developed the characters are. From Geralt, to his brothers-in-arms, to that random drunk telling other drunks that their mothers suck on dwarf penis. However, the farther along you get, the more holes you'll find in what seemed to be a perfect experience. One of the first things you'll see are the myriad character palette swaps; for random street people this wouldnt be that much of an issue, but actual quest related characters are sometimes identical twins of other characters you meet in a game. Early on in the game, you'll meet a priest who asks you to slaughter some monsters for him; comply and he becomes a valuable ally. In a later chapter, you'll meet another priest on the streets of the main city, who looks like the previous clergyman in every single detail. Same clothing, same voice, same face. Same everything, completely different person.

Dialogue pertaining quests or locations youve no prior knowledge of will be randomly dropped into conversations, and quests fail to differentiate themselves enough from each other to stale-proof themselves. Characters that appear in the books, also appear in the game, and the game often presumes that we know everything there is to know of these characters, not entertaining the thought that a lot of players never heard of the book series before the game. Even the mini quests in which Geralt uses his physical attractiveness and silver tongue to bed the many women of the game to get a "sex card" that displays the woman with whom you just played "hide the sausage" with will start to lose its charm after the umpteenth time you do it. The combat engine, while fresh in the beginning, will start to grate on your nerves once you're attacked by the same things over and over again turning once fresh bloodbaths into mindless, unskippable chores.

The Witcher still comes highly recommended. Theres flaws, but these stem from the game trying too much rather than too little in most cases. The makers promise 80 hours of gameplay, but this includes CDProjekts recycling tendencies. The story is interesting, the main character is a loveable arse, the scenery is beautiful.

If the makers knew that less is more, it could be the benchmark PC RPG. This way, its quality, while still undeniably there, is a bit blemished.

© 1998 - 2022 HonestGamers
None of the material contained within this site may be reproduced in any conceivable fashion without permission from the author(s) of said material. This site is not sponsored or endorsed by Nintendo, Sega, Sony, Microsoft, or any other such party. The Witcher is a registered trademark of its copyright holder. This site makes no claim to The Witcher, its characters, screenshots, artwork, music, or any intellectual property contained within. Opinions expressed on this site do not necessarily represent the opinion of site staff or sponsors. Staff and freelance reviews are typically written based on time spent with a retail review copy or review key for the game that is provided by its publisher.