Imaginatively, Koudelka is a game about Koudelka, a young girl blessed (or cursed, as it often goes) with psychic abilities, who is drawn towards an old abbey in the heart of 19th century Wales. She isnt alone in this odd urge; it doesn't take long before she meets Edward and James. Theyre a weird bunch and dont subscribe to that 'instantly life friends' situation that every RPG seems to have; each member clashes with the others in a refreshingly human way. Koudelka is a cynical, sarcastic girl, searching for the reasons she was called to the abbey; Edward is a thugish and headstrong wannabe poet, thirsting for inspiring adventure, whilst James is a knowledgeable, yet whiney Priest, sent to the abbey from the Vatican. With such drastically differing personalities and motivations, the trio often squabble, something that is captured brilliantly by their respective voice actors. This deliberate placing of characters is highlighted by a clever little touch in the symbolic use of chess pieces to describe each person. Kouldeka receives the Queen, Edward a knight, and James a bishop.

Starting the game, you have little explanation of why each character is present, or even the importance of the abbey in whose dark corridors you stalk. You learn this mostly through numerous in-game cutscenes, all the while exploiting the above-average voice acting present throughout the experience. In exploring the abbey, you'll discover its history and its meaning to each of your party members. Needless to say, it isn't going to be all lightness and cheer, and while you travel the dank recesses and rustic abandonment that unfolds within, you'll soon find out all about the disturbing tales that have taken place within its walls.

A lot of these things arent pleased at your intrusion and will attack you, highlighting Koudelka's biggest flaw very early in the game; the battle system. It's arranged in a turn based strategy predicament where you have a grid formation on which you can move your cast around like chess pieces and engage the enemy. A system that probably wouldn't be so bad if it wasn't for the dismal pace its set at. Cast a spell and wait for the below-par spell animation to kick in; attack the evil beasties and wait while the sluggish blow lands; kill the wretched things, and watch as it very, very slowly fades from screen. The main delay is that when something is happening, only the aggressive character and the intended target are left on the playing field while everyone else is faded from view, only to be brought back at the end of the attack - which is time consuming. Even when you move your cast about the grid, youre meet with the same slowness, and as the battles drag on. If this wasn't enough, you and the various monstrosities that roam the abbey seem to emanate a magical and invisible force field that stops them from being passed. If someone is on a line of the grid, an opposable force cannot pass, ensuring there will be no flanking here. As it is, you can strike at angles, so can be diagonally placed, and still attack your target, but it is a puzzling exclusion to make. 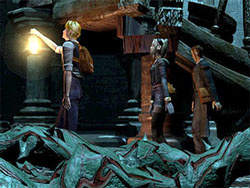 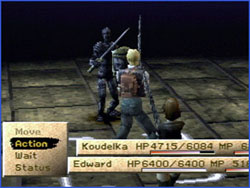 Thankfully, its not all bad. Despite the battle scenes being a rather bleak and poorly disguised grid, they do offer clever little touches according to your location, such as a multi-coloured shadow of a stained glass window, or the uneven, rotting wooden floor of a neglected loft. As for the various ghouls you'll encounter, most of them are simply brilliant designs, reeking of originality and exhuming the feel of a Lovecraftion nightmare. Sure, your basic zombies and ghosts make an expected appearance in between the hybrid human baby/ant hybrids that cry in infantile pain and horror when struck. Even though recognised faults like pallet swapping are present, it's rarer here than in most games, and cant stop your opposing forces from oozing class. If that wasn't enough, the levelling system is nicely worked. Not only do you have the basic stat-based levels that rise with the accumulation of experience points allowing you to customary build your cast members stats, but weapon levelling allows you to become more proficient with the various tools of torture you get to wield. The more you use a type of weapon, the more strikes you can string together in a combo. You can raise most weapons up to lv3, allowing you a maximum of a three hit flurry. Weapon classes are lumped together, so raise your level on, say, a club, and you raise your level on all melee weapons such as pipes, maces and other blunt instruments of bludgeoning. As you have many weapons to discover, including knifes, swords, axes and firearms, it's always handy to train up these skills as much as you can. But beware; your chosen weapon has a lifespan of its own, and will often get itself broken in mid battle. Firearms are exempt from this condition, but it helps to know that other weapons are easily found in the first half of the game, and can be regular drops later on. A touch that stops you from being comfortable with one weapon type throughout the game. The same levelling system works for your magical abilities, each level strengthens your spell, and adds to its range.

And their presentation sounds a happy note, seeing as the in-game graphics of Koudelka fit the game well. The dark pallet successfully sets a foreboding mood while the shadowy backgrounds, despite looking a little flat at times, contain intricate details and house moving animations themselves, such as a clock's pendulum swinging to and fro. The cut scenes using the in-game engine's graphics do look blocky and awkward at times, but the character models move smoothly, the various gestures and lip sync meshing well with the voice acting.

The game boasts two battle themes, and this is all the music you will be receiving. You have one set of music for random battles, which makes a stab at being a period apt remix of sorts, and a boss battle music, which is altogether a more violent feeling piece. Both tunes in themselves are far from terrible, but their repetition throughout the game tends to get pretty irksome pretty quick. I myself was never annoyed enough to ever mute, but the shine of the battle themes had certainly worn away by the end. Another oddity is the games curious use of accents. Respectively, you have cast members hailing from Wales, England and Ireland, yet the VA's are very obviously American, and absolutely no attempt has been made to disguise this. It makes me wonder why bother to set the story in rural Wales, then make absolutely no attempt to show the player they are there. 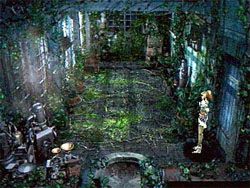 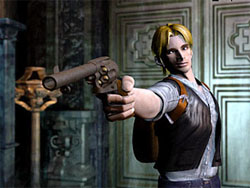 It probably helps you wont be there long; its a relatively short and easy game to complete. You rarely have to worry about dying, as with each level up, your HP and MP are fully replenished, with the same effect present when you use a true save-in point, as opposed to a temporary save. The saves system in itself is quite clever, with some rooms offering the temp save, of which you can only have one on your memory card and the true save points, in the guise of holy water fountains, often being protected by large boss monsters. The controls are also worth a note, with Koudelka following your direct input rather than using a more Resident Evil-like rotation system. For the most part, this works well, but thanks to some of the more rather dramatic camera angles, you might find yourself confused now and then. A nice inclusion is how Koudelka will look at her surroundings as she explores, pointing the way to a helpful piece of equipment or in-game puzzle. The menus too are nicely set out and easy to navigate, helping you change equips, cast healing spells and use items crisply.

It is, however, one of the least scary horror games out there. For a game that is meant to have a gothic horror edge, and one that sets such a great atmosphere, it really misses out on having genuine jump moments. The various ghouls are found via a RPG random battle encounter which kills the creepy sensation of seeing zombies and ghosts stumbling and floating about the place, and apart from the CGI's, key moments in which a scare could have been easily manufactured are ruined by the decision to have the action played out with text rather than a moving scene. This is a real shame, seeing as several moments would have been in a prime position to make the gamer jump a few feet.

But when it's all said and done, Koudelka is hardly a bad game, but one that finds itself falling short of being a great one. If you can look past the short lifespan and the poor battle system, you will find a great story being told though an impressive cast in an oppressive atmosphere. It's not for everyone, that's for sure, but it certainly shouldn't be dismissed without fair chance.

The fact that it spawned the Shadow Hearts series can only be viewed as a plus.

If you enjoyed this Koudelka review, you're encouraged to discuss it with the author and with other members of the site's community. If you don't already have an HonestGamers account, you can sign up for one in a snap. Thank you for reading!

© 1998-2021 HonestGamers
None of the material contained within this site may be reproduced in any conceivable fashion without permission from the author(s) of said material. This site is not sponsored or endorsed by Nintendo, Sega, Sony, Microsoft, or any other such party. Koudelka is a registered trademark of its copyright holder. This site makes no claim to Koudelka, its characters, screenshots, artwork, music, or any intellectual property contained within. Opinions expressed on this site do not necessarily represent the opinion of site staff or sponsors. Staff and freelance reviews are typically written based on time spent with a retail review copy or review key for the game that is provided by its publisher.