If you have a thing for monster girls in various states of undress, a love for absurd dialogue and an even greater appreciation for extended dungeon crawls, I think I might have just the game for you! It's called Moero Crystal H and it is available now on Nintendo Switch for download, as well as physically for those who don't mind shopping at Play-Asia. One does what one must for bitter game cards.

There are some people who are pretty excited about Moero Crystal H making it to North America, so perhaps I should explain. The game is distributed in that region and in Europe by EastAsiaSoft, rather than by Japanese publisher Idea Factory. As you may be aware, Idea Factory does have a growing presence in the US. One gets the sense this is a game we nearly didn't see localized for the west in spite of that fact. It's an installment in the rather niche Genkai Tokki franchise (Monster Monpiece and Moero Chronicle) that made its debut on PlayStation Vita in late 2015 and never left Japan. A week shy of five years is a long time to wait. 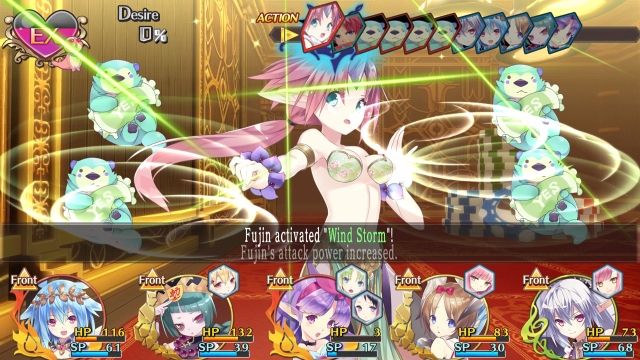 The plot, which doesn't matter except that it's too absurd not to mention, is that a young man named Zenox has undertaken a quest to find his missing father. His journey takes him away from the country where he was raised, to the big city. Since fate has brought him near the temple, he decides to pay a visit. That's when things go spectacularly wrong. The lights go out and someone escapes with the Dark Bra, a holy artifact of monumental importance. Zenox is initially blamed for the theft and soon finds himself leading the quest to retrieve it. He is accompanied by the shrine maiden's guardian, a winged girl named Luanna, and by a seal-shaped fellow named Otton who wears the Light Panties on his head like a crown. That initial trio of reluctant allies follows the thief around the realm, gradually restoring sanity to the many out-of-control monster girls who have been touched by the Dark Bra, all in hopes they can save the world from judgment at the hands of a vengeful deity from another dimension.

Got all that? It doesn't matter if you don't. Just remember that you need to find monster girls and free them from a corrupting influence. You do that by battling them, by slowly stripping away their clothing until they are almost naked. Then you scratch at their weak points (ideally, by rubbing the screen in handheld mode) to rid them of the last vestiges of evil that have altered their personalities. If you achieve that, they will revert to their true selves and will owe you a favor that they repay by joining your crew. There are around 80 monster girls to find, and you just know you gotta catch 'em all! 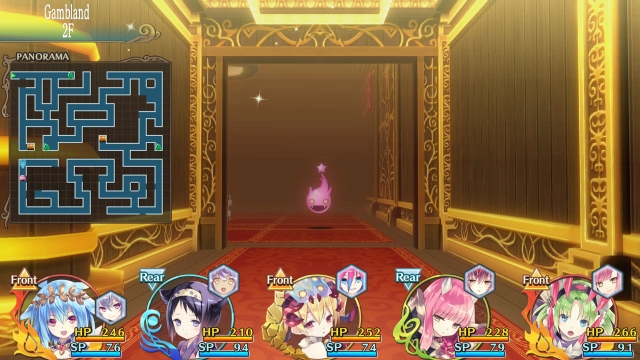 The dungeons where you will find your new allies are viewed from a first-person perspective, like in a classic Wizardry game, but with design that clearly was influenced by the Etrian Odyssey franchise. You don't have to draw your own map, though, because it fills in on-screen for your convenience. And really, that is a great time saver. I liked that Atlus did something unique with the DS hardware back in the day and paid homage to the piles of graphing paper and stubby pencils gamers of an era amassed at one time, but once the novelty wore off, the process could get a bit tedious. Here, the maps are useful and automatically note things like staircases, icy floors, portals and pits. If you're roaming familiar territory and unafraid of local resistance, you can even set a waypoint and automatically navigate to it, only lifting a finger when you need to battle through random encounters.

Combat, which is purely turn-based in nature and can occur frequently in some areas, is fairly involved. There's the option to auto-battle, but taking advantage of it is often a bad idea because even weaker mobs can decimate your crew in a few seconds of fast-forward action. Zenox himself is the party cheerleader and doesn't exchange blows with anyone. He just uses items or charges up energy he can then hand off to the girl of his choice to permit an extra powerful attack every few turns. That's useful, but you mostly rely on traditional melee combat and elemental magic. There is the usual wheel of elements, spread between earth, wind, fire and water. Monsters have an aura that dictates which element harms them most, and you'd better believe that matters. Trying to chip away at a monster without the right magical artillery can take quite a lot of time, which means you need to devote some actual thought not only to the actions you take most turns, but also to your party formation. 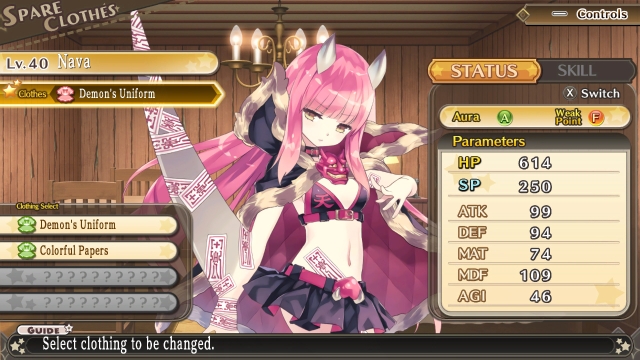 As I noted, there are around 80 monster girls to ultimately recruit over the course of the campaign and beyond it. Each girl requires some attention if you want to make her resemble the powerful adversary you first encounter. Back in town, you have to visit her room at the inn, which you can upgrade with items acquired in dungeons. This is helpful, because your party can contain only five active girls at a time. The ones who stay at home and enjoy the easy life gain XP while they idle, but the amount they acquire depends on the quality of their room. Better digs also incline them to feel more warmly toward Zenox, as do appropriate gifts. And to unlock those sweet, sweet monster girl abilities--including the option to change their bras and panties, which work as makeshift job classes and also affect how they appear in any cutscenes or character status screens--you must dive into their psyches, like the hero in the Ar Tonelico games. This means playing a basic vertical shooter where you blast away at their clothing and expose magical crystal portals leading to single-floor dungeons. There are three such destinations for each girl, which means hundreds of additional floors in total.

In case there's any doubt in the matter, let me say this outright: there is no shortage of content in Moero Crystal H. I repeat, there is no shortage of content. You are likely to tire of crawling through dungeons well before you have explored every square of every map, and I'm sure that's by design. I don't imagine the developers expect players to explore every location thoroughly. Instead, you'll want to focus on those monster girls you like the most, the ones that grant the best abilities and elemental boosts. The others you can partner with your chosen companions, to offer special boosts like improved defense or resistance to particular status ailments or even health refills. The dialogue you encounter along the way gets inane in a hurry if you commit to reading it all, and the mini-dungeons start to feel overly familiar even when you've never visited them before. You're better off making careful choices, rather than trying to see everything. 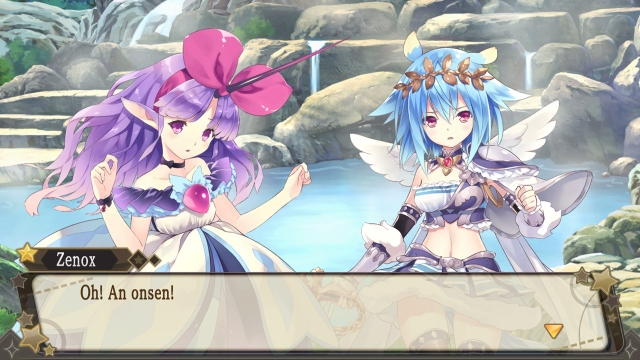 Eventually, you should reach the end of the campaign with a team of veteran monster slayers, and then there is the showdown with the final boss and the credits roll. From there, you can keep playing to visit special areas that until then had been locked away, and you can get to know your favorite girls even better by taking advantage of some new modes. The difficulty level continues climbing, as well, but by that point you should be familiar enough with how everything works that you relish the challenge. Also, another option unlocks from the main screen and makes it much easier to pore through piles of artwork or even listen to your favorite selections from the notably solid soundtrack.

It would have been a shame if Moero Crystal H never made it out of Japan, because it has a lot to offer fans of lewd dungeon crawling. There's more to it than I could mention here without droning on longer still, because in addition to being packed full of scantily-clad anime girls with claws, scales and more, the game features surprising depth at nearly every turn. It's the sort of treat a lot of JRPG fans will likely miss even now, but they really shouldn't.
4.5/5

If you enjoyed this Moero Crystal H review, you're encouraged to discuss it with the author and with other members of the site's community. If you don't already have an HonestGamers account, you can sign up for one in a snap. Thank you for reading!

© 1998-2021 HonestGamers
None of the material contained within this site may be reproduced in any conceivable fashion without permission from the author(s) of said material. This site is not sponsored or endorsed by Nintendo, Sega, Sony, Microsoft, or any other such party. Moero Crystal H is a registered trademark of its copyright holder. This site makes no claim to Moero Crystal H, its characters, screenshots, artwork, music, or any intellectual property contained within. Opinions expressed on this site do not necessarily represent the opinion of site staff or sponsors. Staff and freelance reviews are typically written based on time spent with a retail review copy or review key for the game that is provided by its publisher.