Welcome to A Remedy For What Ails You, a five-part retrospective on one of my favourite developers. That developer of course being Remedy. This time, Ill be scrutinizing one of their most experimental games, and poking at all the gross sinewy stuff that holds it together. Ill also be taking some time to remind you that this game exists, and telling you why its substantially better than its black sheep reputation might have you believe. This one surprised me, folks, and I want to share that.

Even if the rest of this game was an utter mess, one thing would stand head and shoulders above the rest; the graphics. Before you so much as move your character, Quantum Break takes the opportunity to utterly flex the power of Remedys shiny new Northlight engine. Even against its contemporaries that year, like Uncharted 4 and Battlefield 1, Quantum Break sets itself apart with its wonderfully crisp and stark artstyle, and stunning lighting. Its a true delight to behold, and one that I wish more folks would talk about. The good news is that beneath the incredible graphics, theres also a game with a great story, and some delicious gameplay throughout. Reminiscent of 2005s Black, gameplay segments are presented as flashback sequences, framed by an interview with a mysterious woman, which I imagine was a decision to better accommodate the unusual narrative choices made in the game. Nosiree, there isnt an elephant in this room. Perfect lack of elephant aside, this structure also neatly allows for an organic flow between locations and setpieces: this being primarily an action game, after all. The first of those locations is Riverport University, where we get to play as Jack, who travels to the university after dark, to meet with his good buddy and fabulously wealthy Elon Musk stand-in, Paul Serene. Paul has, naturally, created a time machine, and in the grand tradition of all good tragic scientists, has decided that the best way to test it is to go through it himself. 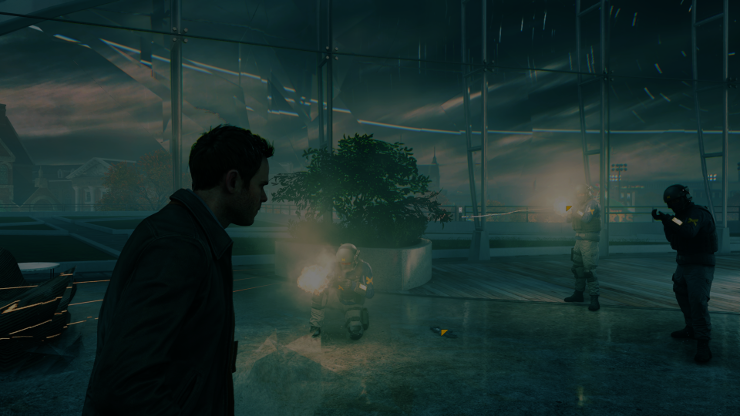 All other points aside, I have to point out how much I dig the design of the time machine here: its a massive contraption that takes up an entire room, and looks horribly ramshackle. It looks exactly like a first generation time machine should look, and I love that. Even if it werent such a cool looking thing, the ensuing series of events would still make up for it, as the experiment duly goes awry, and Jack is forced to flee the university in a spectacular series of gunfights and time-stopped setpieces that look absolutely sumptuous. Its here that you get introduced to the combat, and to how much Remedy refined those pesky combat mechanics over the years. Right away, youll find that your weapon select is bound to the d-pad, that Jack takes just the right amount of damage, and that your newly-acquired time powers are bound to their own buttons, making flinging them around a breeze. At first, you only have Time Vision, which allows you to spot enemies through walls, and highlights items, but you quickly progress to more fun powers like Time Stop, which allows you to completely freeze most enemies, and then empty a whole shotgun magazine on them. That one never gets old, but neither do the other powers, like your Time shield and time-altered sprint ability. Towards the mid to late game, you also get to deal with enemies wearing special suits that allow them to move in the games signature weird time stop moments, and big tanky foes, as well as weird time monsters. Like with Alan Wake, enemy variety isnt too vast, but the combinations of them present a well-balanced challenge. When youre not using perfectly functional weapons and slick time powers to blow away enemies, youll be spending your time traversing the environment in a linear fashion, enjoying story bits, picking up lore scattered around, doing some mild problem solving, navigating spectacular setpieces, and even some platforming. The platforming isnt horrible, either, so thats an improvement on all of Remedys previous games. The environments are all really nice too, with anything from a city bridge to the headquarters of a huge tech company to explore, so you never feel like youre just trudging around the guts of Manhattan.

If the gameplay being bolted down this tightly didnt make for an enjoyable experience, then the story and characters attached would certainly make up for it. Though Jack isnt the most clearly defined character, his relationship with paul Serene is a really interesting dynamic, as the two of them start off as friends, until the accident with the time machine causes Paul to act erratically, eventually using his companys vast resources to put the city under martial law. Other characters like Jacks brother, or Beth Wilder flesh out the cast, and provide an emotional throughline for when the game starts to go full wibbly-wobbly-timey-wimey. In fact, its admirable how well the game fleshes out time travel, and concepts like being stuck in the past and having to get to the present the long way round. As a cherry on top of it all, the game also has one really neat trick up its sleeve in regards to Paul Serenes character. At the end of each level, the game lets you play as Paul Serene, and puts you in the difficult position of having supreme executive power, but few options to limit the damage you caused. It means that throughout the whole game, Paul constantly feels like a flawed and real human being. Its a testament to how far the team at Remedy have come. Its just a shame all of that got buried under the weight of the elephant that definitely isnt in this room. 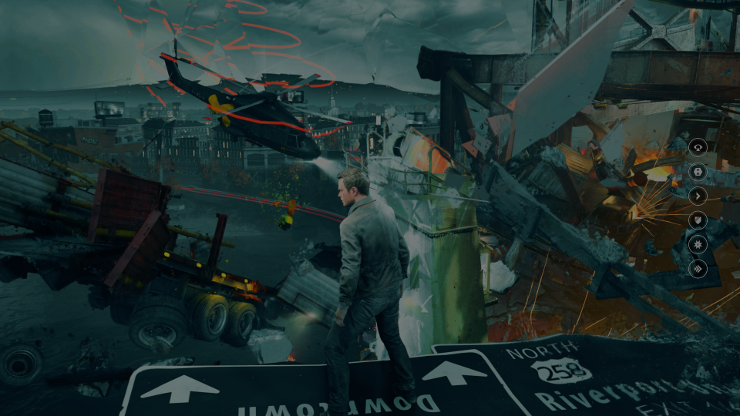 Alright, lets get this out of the way immediately: the big selling point of Quantum Break must have seemed like a good idea at the time. Nobody had done a tv show/videogame hybrid before, and the moment the TV show happens, it becomes clear why. It turns out breaking up great gameplay with hour-long cutscenes is a downright atrocious idea. In the fullness of time, the servers that host those videos will eventually have to be shut down, and copies of it on Xbox One units may only ever see the light of day through piracy, if at all. Its a sad end for so much effort, but thats the least of it, because even if the TV show attached to the game was amazing, I wouldnt know, because I skipped it every time.

The game makes some effort to cater to folks who choose to skip it, as I always found that I had a general idea of what had gone down through traditional cutscenes and so on, but thats not the point. The point is that in my super cool action game, I found myself faced with the choice of sitting through a lunch breaks worth of non-interactivity, or missing out on story elements. Neither is a great choice for the player, and sadly, it seems like Quantum Break is going to be remembered for that one terrible choice over anything else. Theres a bigger problem here, though, and thats performance. 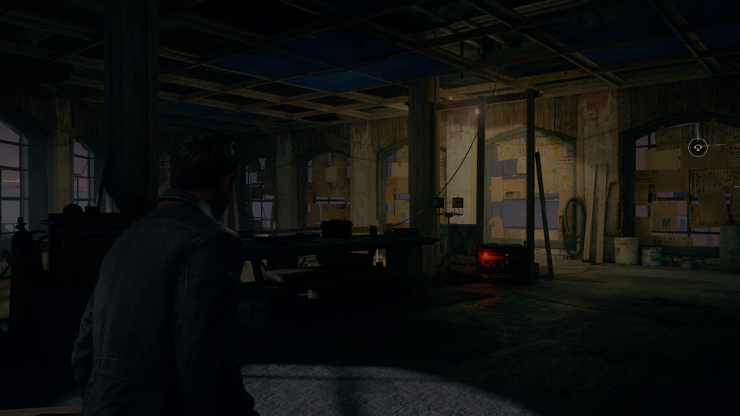 I dont have a copy to test on an original Xbox VCR, but if youll forgive my tinfoil hat, I have to wonder if the downright awful performance (if not the TV show problem) is a direct result of laser-focused optimisation for that console. Given how woefully underpowered that console was, I can only assume that the developers used dark sorcery to get Quantum Break running on that machine, and the PC version carried over the same optimisations, which didnt play nicely with PC hardware. In truth, once youve made the appropriate graphical sacrifices, Quantum Break still looks gorgeous, but taking the game to 4K with a GTX 1080 at any settings resulted in single digit framerates. For comparison, I can run any given big release at 4K at between 40 and 70 FPS. Quantum Breaks performance is WAY OFF, and nothing short of quartering the resolution got it to run smoothly. No reasonably priced rig can beat this game into submission.

Finally there are a couple of minor issues in the weapons, which mostly boil down to the weapons lacking personality, and the heavy pistol being a terrible choice. Besides that, though, once youve managed to wrangle the game under control, Quantum Break is mostly a great time.

While much maligned for its ill-conceived big gimmick, Quantum Break is honestly one of my favourite games by Remedy. In what seems to be a pattern so far, a rough PC port holds it back from contending for full marks, and a singular awful decision means I cant put it all that near top marks either, but what I can do is recommend that anybody with an Xbox One, box One X, or powerful enough PC, have a go.

If you enjoyed this Quantum Break review, you're encouraged to discuss it with the author and with other members of the site's community. If you don't already have an HonestGamers account, you can sign up for one in a snap. Thank you for reading!

© 1998 - 2022 HonestGamers
None of the material contained within this site may be reproduced in any conceivable fashion without permission from the author(s) of said material. This site is not sponsored or endorsed by Nintendo, Sega, Sony, Microsoft, or any other such party. Quantum Break is a registered trademark of its copyright holder. This site makes no claim to Quantum Break, its characters, screenshots, artwork, music, or any intellectual property contained within. Opinions expressed on this site do not necessarily represent the opinion of site staff or sponsors. Staff and freelance reviews are typically written based on time spent with a retail review copy or review key for the game that is provided by its publisher.