Hotshot Racing is a beautiful new racing game, in a polygonal sort of way. There are gorgeous seaside towns, streets lined by skyscrapers, mountain lodges, desert cliffs and plenty more of the sights and sounds you expect from an arcade cabinet, circa 1998. The aesthetic alone is going to win over a particular sort of player, and certainly it appeals to me. The gameplay, however, does not reach the same lofty heights.

There are 16 tracks at your disposal, spread among four circuits and sorted roughly by difficulty. The earlier circuits feature shorter tracks with fewer turns, while the later ones offer a few switchbacks and not so many straight stretches. There's not much in the way of memorable layouts, though, and even though the scenery is attractive in that old school way that makes me feel like I should be sticking a quarter in a slot somewhere, not much of it really registers. I don't imagine a lot of folks will be talking even one month from now about that neat series of turns they drifted through on that one track. 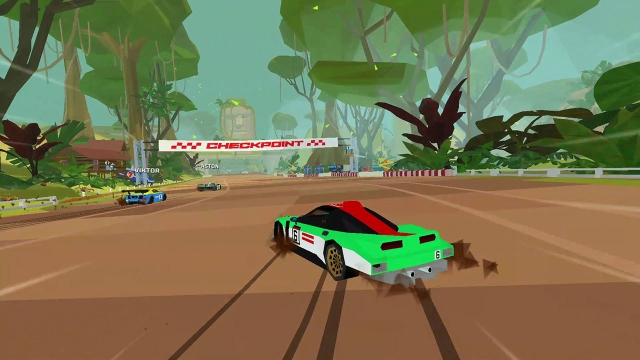 Yes, I said "drifted." And I don't know how you feel about drifting racers, but I don't love them. There's stuff like Ridge Racer or Juiced that I quite enjoy, but to me it feels like the mechanic is mostly utilized poorly. I'd rather just have tight handling so I can speed into a curve and accelerate out of it with split-seconds added to my lead over the nearest rival. That's not the sort of scenario that plays out for me all that often when I play Hotshot Racing, though.

Picture a hard turn to the right, with arrow signs posted ahead so you see it coming. You need to turn in that direction, gracefully if you can. So you aim for the center of the bend, racing toward that back rail at a speed that only works in the digital world. Then you tap the brake and veer right and your car complies. It drifts in that direction and you feel the bliss that comes from-- WHAM, BANG, BANG, SCREECH!

Suddenly, your car is spinning sideways. It crashes into a rail and, depending on the difficulty setting you selected, you've probably just lost the race. On Normal, if this is the first lap or two, you can still catch up to your rivals. They'll helpfully spin out on curves, or materialize on the side of the road as flashing distractions as you zip past them and claim the lead. Probably. But on the higher difficulties, you'll be left sucking exhaust fumes for the rest of your days. And it's not your fault. You led the pack going into that turn. You have higher speed than any of your rivals. You drove just where you needed to, did everything right. But someone on the development team likes rubber bands, especially as they apply to AI. 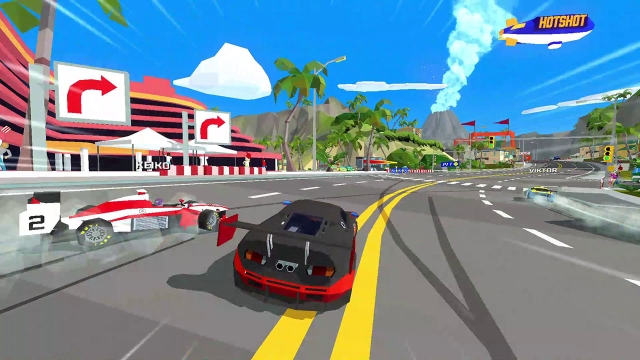 The AI racers you compete against in Hotshot Racing are simply too good at speeding up impossibly when you build any sort of lead. They're good at bumping you slightly as they catch you, with any minor scrape being the one that might just end your career. I suppose someone thinks this is fun, but I just find it irritating. And since there are four races in a circuit, and since that bump can come at any time, your odds of racing a perfectly satisfactory series are pretty slim. The only way things might be reasonable at all is if you spend most of your time online, driving against as many as seven other humans. At least then you know you earned any losses and victories. Alas, there don't seem to be a lot of people playing online (at least not on Nintendo Switch), so I was never able to test that theory.

I should note here that there are mechanics in place to make the game's shortcomings more tolerable than I've possibly made them sound so far. You can build up a boost meter by drifting around the many turns, or by falling behind a leading car and overtaking him due to some absurdly exaggerated slipstream effects that could only feel remotely natural in an arcade racer like this one. That's neat, but sloppy physics and AI get in the way. Races are only thrilling because there are long stretches of time when you're helpless and you don't know whether the AI will elect to play fair and reward skillful play. To add insult to injury, you might manage to secure enough points for a podium finish, only to find you've been knocked off it by a place or two because (in the likely event of a tie) your performance matters least to the judges.

Another attempt at depth on the part of the developers doesn't add much to the experience, either. You can customize your driver's outfit and make very minor adjustments to your vehicles, and that's neat too. But you never see the driver except on the character selection screen or after finishing a circuit, and the vehicle changes are minor. For instance, a car might have four tailpipes instead of two. It's not exactly sensational. Some possible adjustments are also locked behind objectives. Can you drift enough in a single race, friend? 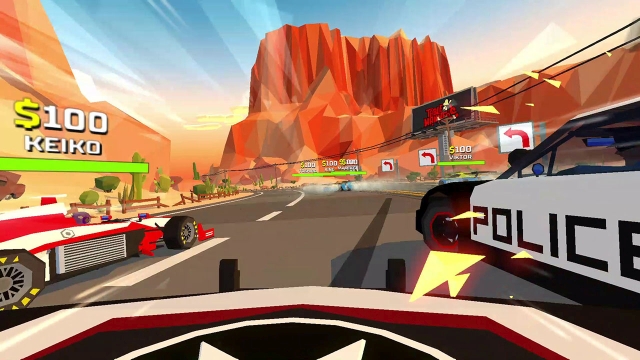 A final twist might still have made the game stand apart from the pack. In addition to the circuit events, you can vist a single favorite track in Arcade mode. Or you can play two other modes. In one, you try to maintain a high rate of speed, like Jason Statham with a dodgy heart. But the other drivers bump against you so aggressively that it's hard to keep to the road and not lose propulsion, even with a dwindling supply of boosts at your disposal. In the other mode, you zip down the track as a robber fleeing the police with fellow felons. There are cash deposits you can snag to invest in repairing your car as you're knocked about by black and white cruisers. Then you can switch to driving a patrol car, if your own run ends in a fiery crash.

I really, really like the game's aesthetic, as I discussed at the start of this review. And there are other elements I dig too. The controls aren't bad once you get used to them, which doesn't take long. It's neat that there are eight different drivers, each with their own backstory and a brief post-win sequence reminiscent of the Street Fighter games. The announcer is suitably enthusiastic, the sense of speed is solid, and everything is animated smoothly enough for my liking. In short, Hotshot Racing is almost a very good racer indeed. But then it settles for being something less.

If you enjoyed this Hotshot Racing review, you're encouraged to discuss it with the author and with other members of the site's community. If you don't already have an HonestGamers account, you can sign up for one in a snap. Thank you for reading!

© 1998-2021 HonestGamers
None of the material contained within this site may be reproduced in any conceivable fashion without permission from the author(s) of said material. This site is not sponsored or endorsed by Nintendo, Sega, Sony, Microsoft, or any other such party. Hotshot Racing is a registered trademark of its copyright holder. This site makes no claim to Hotshot Racing, its characters, screenshots, artwork, music, or any intellectual property contained within. Opinions expressed on this site do not necessarily represent the opinion of site staff or sponsors. Staff and freelance reviews are typically written based on time spent with a retail review copy or review key for the game that is provided by its publisher.