I think we've all heard virtually everyone making comments on just how bad 2020 has been. Little things like plagues and cities on fire do tend to bring out the average person's inner pessimist. Fortunately, I'm better than that, at least as long as we all forget about that review or two where I made my own comments in that vein. So, now that we've all agreed to bleach any and all such comments from our collective brains, let's just say I've had better things to do than worry about current events.

I, Rob Hamilton, have taken this time to explore the world in a hunt for rare treasures in exotic locations! And, since there's nothing I can't do, I also took advantage of my ability to time travel in order to have indie gaming company Fatshark release a video game based on these recent exploits back in 2011 on both Steam and the PlayStation 3. Named Hamilton's Great Adventure, my adventures were delivered to the masses as a hybrid of the puzzle and action genres.

A few things were changed. The main character goes by Ernest Hamilton and is portrayed as an elderly gentleman telling fanciful stories of past adventures to his granddaughter. Understandable -- as crazy as the shenanigans I get up to can be, it's a good idea to frame them as tall tales told in order to keep a precocious child's attention occupied. While I won't deny that I had an, uh, associate named Sasha with me during my travels, I'm pretty sure she wasn't a bird. But I get that, too. It would seem kind of weird to have the grandfather/grandchild story-telling dynamic attached to a game possessing a "Adults Only" rating. Which also explains why none of this game's chapters take place in Amsterdam, come to think of it

The plot is fairly minimalistic, with ErnestI mean, metraveling the world to find parts for a gizmo a professor friend is trying to complete. Bizarre forces seem set on preventing this objective from being accomplished, though, so the search will last for four chapters in such places as the Amazon and the Himalayas, as you go through a bunch of levels, while occasionally getting a bit of exposition. 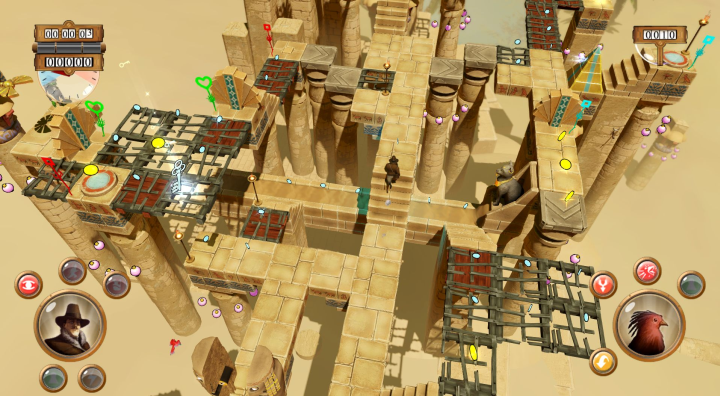 With so little story, the focus is obviously on completing those levels and, for a while, that'll be enough to keep a person reasonably satisfied. Hamilton's goal is simple: collect the gold key to each level's door and go through it, collecting as much treasure as possible along the way. Accomplishing that goal? A bit trickier, especially after you've advanced through a few of those generally toothless early-game challenges.

Initially, your main obstacle will simply be finding the proper path that allows you to get all the treasure and the key, while still being able to leave. Each level is divided into squares, with each step you take advancing you one square. Many of these squares are either flimsy or reinforced wood. The former can be walked over once before crumbling into oblivion, while the latter goes from reinforced to flimsy after you've gone over it once and then disappears after crossing it again. Obviously, this means you'll have to plan out your steps in order to not miss out on treasure or risk winding up in a corner with nowhere to move.

Sasha proves to be a big help in this planning. Just like me, Hamilton is a short-sighted dude. He can only see a few squares in any direction and likely will be clueless as to how his current moves might impact what he'll need to do later. However, his bird buddy can fly over the stage, allowing you to gaze upon everything, as well as perform a few actions that can potentially help the adventurer survive his adventuring. She can pull distant switches to activate elevators or remove barricades, while also collecting floating purple globes that are used to activate a handful of special abilities Hamilton will gradually obtain. She's even useful when enemies start to appear in the levels, as she can emit a loud screech to distract them.

Early on, those enemies aren't really any trouble. The first ones are little more than obstacles that bounce up and down on particular squares. Walk over the square when they aren't on it and you're cool; collide with them when trying to do so and it's time to start the level over from scratch. A bit later on, walking statues provide a bit more of a challenge, but since they move in a pre-set path, it's generally easy to maneuver around them. The agents are a bit different story, though, as when they catch sight Hamilton, they'll stalk him throughout the stage, often forcing you to get a bit creative in avoiding or disposing of them. While Hamilton is pretty helpless in a scrap, he is capable of using various traps and those breakable surfaces to his advantage. 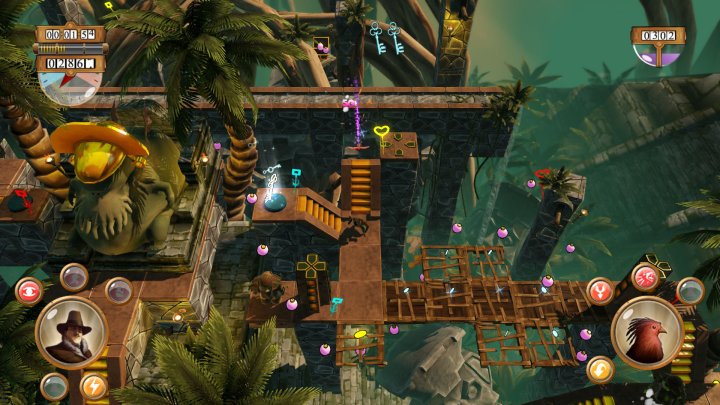 There also are a fair amount of special squares, such as springboards that vault you over one square to the next and switches that might open paths and also might cause certain bits of decoration to start firing bullets regularly. And, as you progress, stages will get more complex, often requiring you to find one or more silver keys to unlock doors in order to progress through levels. While there's no need to do anything other than get the key and get out, if you do get lots of treasure, you'll get a higher score and be able to unlock a number of really challenging optional levels.

While I did unlock a fair number of those, I didn't really get into them, much like I struggled to find much enjoyment after I'd progressed about two-thirds to three-quarters of the way through. Since we're talking about MY adventure, thisis not good. Hamilton's Great Adventure is a story of two games. For a large portion of it, it's a reasonably enjoyable puzzle game that can be taken at any pace. Enemies are easy to avoid, traps are few and far between and it's fun and relaxing to study levels to find the perfect combination of moves necessary to collect all the treasures. I even took the time to get Gold rating on all 11 of the mandatory stages in the first of four worlds!

As you progress, though, things gradually move from slow-paced and cerebral to something a bit more reflex-oriented. This is where the appeal started to fade for me. Like I said, this game is divided into squares with one press of the left stick moving you one space. There's no diagonal movement -- you can only go in four directions. This is all well and good when you're simply trying to plot the correct path across a bunch of breakable surfaces or get past those simple early-game obstacles. However, when doing some of the later levels, I found the play control to feel a bit questionable. Having to make quick-and-precise movements to sprint past bullets or barrels could get frustrating at times, with that compounded by how one mistake in those situations would lead to me having to start the level over from scratch.

If this game had truly resonated with me, I'd have no problem with practicing and practicing and practicing some more to advance past the toughest challenges, but Hamilton's Great Adventure is something I'd best describe as reasonably fun for a while, but then becoming kind of annoying. There's nothing particularly appealing about the game's graphics or sounds, so you won't get hooked by charming visuals or auditory earworms, leaving you with a fairly basic puzzle game that eventually leans a bit too hard on moving quickly and precisely despite the controls not necessarily being well-suited for that. As a rainy-day diversion, this could eat up a few hours, but it's not hard to imagine a person losing interest in it before that day has ended. And as for me, I learned a very important lesson: Being an intrepid time-traveling explorer is cool and all and does allow one to escape particularly annoying years, but in the future, I'll just settle for beer and movies. While I have no problems calling myself great, I can't say the same for this particular adventure.
2.5/5

If you enjoyed this Hamilton's Great Adventure review, you're encouraged to discuss it with the author and with other members of the site's community. If you don't already have an HonestGamers account, you can sign up for one in a snap. Thank you for reading!

© 1998-2021 HonestGamers
None of the material contained within this site may be reproduced in any conceivable fashion without permission from the author(s) of said material. This site is not sponsored or endorsed by Nintendo, Sega, Sony, Microsoft, or any other such party. Hamilton's Great Adventure is a registered trademark of its copyright holder. This site makes no claim to Hamilton's Great Adventure, its characters, screenshots, artwork, music, or any intellectual property contained within. Opinions expressed on this site do not necessarily represent the opinion of site staff or sponsors. Staff and freelance reviews are typically written based on time spent with a retail review copy or review key for the game that is provided by its publisher.