This just isn't Reiko's day. Well, it wasn't her year (or three) either, what with the weird robots appearing out of nowhere, destroying the world and enslaving humanity. Yet today she was caught, stuck in a cell, and awaiting her fate. Until a nice young girl appeared to rescue her! Or so Reiko thought, except the girl just ended up shooting her. And so Reiko lay there, fading away in a pool of blood. Thanks for playing, you didn't even get out of the prologue!

Well, that can't be right. So of course a crazy genius found her and saved her life by turning her into a cyborg, allowing her to fight back against the evil robots, and maybe find her would-be murderer in the process and get some answers on what that whole unpleasant experience was about...

As exciting as that setup is, you can probably already guess what's going on, it's not like this is an original plot or anything. But Giga Wrecker Alt presents it well enough. Your cyborg heroine fights her way through the dystopian future in a side scrolling adventure, filled with what could be considered garish yellows and green and pink backgrounds, but somehow oddly works here. The aesthetic is unique (besides the color palette, there's also a frosted effect occurring at the edges of the screen for some reason). And the game itself - a physics and garbage(seriously?) based puzzle platformer, is unique enough to be worth seeking out.

Your main cyborg ability is to fire a weak bit of energy in front of you, enough to kill tiny robots or smash some simple columns. But the ruins of those robots can be gathered into a ball of trash, allowing you to smash larger foes. Which gives you the ability to summon even larger balls of trash. You can convert this trash into a block (the size of which depends on how much you have), a javelin, a sword (for slicing up columns, not as a weapon), or a drill. The blocks and rubble all follow realistic physics, tumbling down slopes or flying away with too much momentum. 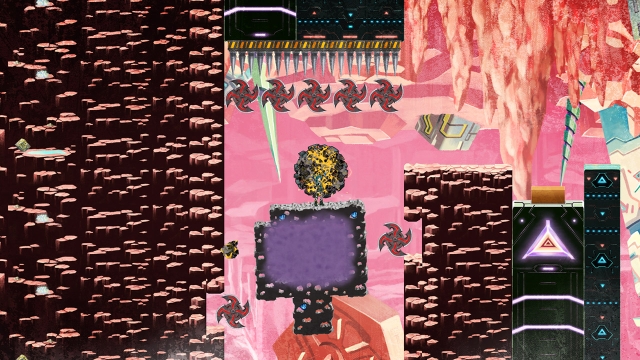 Hence the puzzles. You'll need to use your destructive abilities to manipulate items into the correct locations to activate switches and reach seemingly impossible locations. Break off a huge ledge so it's balancing on a small fulcrum, then use your javelin to add weight to one side and turn it into a ramp. Fire a drill to knock off massive debris into the grinders below, then dash across it before it all gets chewed up. Drop a rock on your foe, crushing him underneath, and then use its scattered remains to safely walk across spikes. But be careful! Since so much is destructible, you may end up hitting the wrong thing, causing your platform to fall the wrong way, or your block might tumble too far and fall off, causing your teeter totter to throw you off. Fortunately, puzzles are easily reset, so you can always try again.

As is often the case, the physics-based nature of these puzzles can be a blessing or a curse. On the one hand, you aren't tied down to the "official" solution. You don't have to follow a precise sequence of moving block X three spaces to allow Block Y to fall, etc. There were multiple times where I managed to collapse things in just the right fashion to quickly hop up and reach my destination before it completely fell apart. And that's fun! It makes those sequences more memorable than just doing whatever a level designer wanted you to do. But the flip side is that there are many times when you know exactly what is supposed to be done, but the tiniest deviation from the proper path means complete failure. And so you sigh, reset the puzzle, and try again to be pixel perfect, even though it isn't immediately clear exactly how much momentum you need, or where exactly you need to strike. You just hope for the best.

But like I said, that's the nature of the beast. For my part, I was ok with the tradeoff. I was also mostly ok with the game's structure, although others might not be. The world is a nonlinear maze, with a central hub and three side areas. Each area is composed of several rooms with 1-2 puzzles apiece. Your reward for clearing out rooms may be a new path, or activating a key (some doors, including boss doors naturally, require a certain number of keys to be activated before unlocking), or perhaps lots of data. This data (also collected from killing enemies and some rubble) is used in a skill tree that gives you more health and other upgrades. The "Alt" version of the game also adds a bunch more puzzle rooms with cosmetic upgrades as a reward. Some might complain that it's only a meaningless addition, but the puzzles are supposed to be the highlight, correct? There's also only three areas, and some odd padding involved in which you have to fight each boss twice. So if you like a more explicit Metroidvania style or a more pronounced level progression, this game might not be for you. But really, it's about the puzzles.

Or at least it should be, but, ugh, I have to talk about the controls. They are, well, not fluid, to put it mildly. You may think you're dropping down to the ledge below, but no, you're lurching forward way more than you meant to. Or you're dashing instead of walking. Or your block goes flying when you want to just want it to drop. Sensing a pattern? For a game built on physics, you need to have full control of your own momentum, but unfortunately it just isn't fluid enough, with seemingly a discrete change going slow and full speed. Likewise, despite the game being physics based, it seems that the javelins you throw are actually only thrown in discrete increments as well. And it's hard to tell if you can attract junk or not, or if it'll actually collect or go flying. So many times, you know exactly what to do, but can never seem to time everything right because of these issues. This is especially true on boss fights. They have simple, easily recognizable patterns, but they move fast, and so the finicky controls will end up being the death of you.

There's a lot of promise with Giga Wrecker Alt, but it keeps falling up short. It's style is unique, even if its story is trite. The physics-based puzzles can bring about cool moments, but also be incredibly frustrating at times. The game's structure can easily be seen as one of padding rather than progression, despite the potential of the moment-to-moment gameplay. And through it all, Reiko is just a tad too frustrating to control. It's not that the game fell just short of greatness, but rather that it kinda feels just short of being a solid and intriguing game. You might still find it worthwhile to play - it is kinda intriguing even if not completely solid - but beware of its pitfalls. And unfortunately, you may find that these pitfalls means the game itself can't escape the trash.
3/5

If you enjoyed this Giga Wrecker Alt. review, you're encouraged to discuss it with the author and with other members of the site's community. If you don't already have an HonestGamers account, you can sign up for one in a snap. Thank you for reading!

© 1998-2021 HonestGamers
None of the material contained within this site may be reproduced in any conceivable fashion without permission from the author(s) of said material. This site is not sponsored or endorsed by Nintendo, Sega, Sony, Microsoft, or any other such party. Giga Wrecker Alt. is a registered trademark of its copyright holder. This site makes no claim to Giga Wrecker Alt., its characters, screenshots, artwork, music, or any intellectual property contained within. Opinions expressed on this site do not necessarily represent the opinion of site staff or sponsors. Staff and freelance reviews are typically written based on time spent with a retail review copy or review key for the game that is provided by its publisher.