Ever started playing a game on a whim and immediately fall in love with it? There you are, thinking you've just found something awesome and every time you pick it up, it puts a smile on your face. Life is good! But then one ugly flaw shows its face and that flaw doesn't go away. It's not some huge deal-breaker where love turns into repulsion, but the experience is marred. That unabashed praise review you envisioned suddenly starts containing disclaimers, entire paragraphs dedicated to complaints and you find yourself wistfully staring out a window with the words "What if" reverberating through your brain over and over again.

Well, friends, welcome to PixelJunk Shooter Ultimate. This game, released by Double Eleven on the PlayStation 4 in 2014, is a compilation of both PixelJunk Shooter games that came out on the PlayStation 3. That this offering combines two games played a big role in me loving it, as neither of the originals is particularly long, but by transforming them into one larger game, the duration felt just right.

Each of the original games contained three worlds, each consisting of five levels divided into five short stages of twin-stick shooting -- with the emphasis swinging far more towards using your brain than simply gunning things down. You'll control a spaceship flying through subterranean caverns to rescue trapped people and collect treasure, before finding your way to the stage's exit. While there are enemies to shoot, that tends to be the easy part. Negotiating natural hazards and manipulating your surroundings is the real challenge.

Early in the game, the main hazard comes from lava. If your ship touches that substance, it'll immediately overheat and cost you a life. If you're close to it, that overheating also occurs, but at a much slower pace, giving you plenty of time to fly to safety. At least unless you get shot by an enemy. While their bullets usually aren't fatal, they will cause your ship's overheating meter to rise to "scary-hot" and in conjunction with lava or another heat-generating substance, they can easily be the straw that breaks the camel's back. 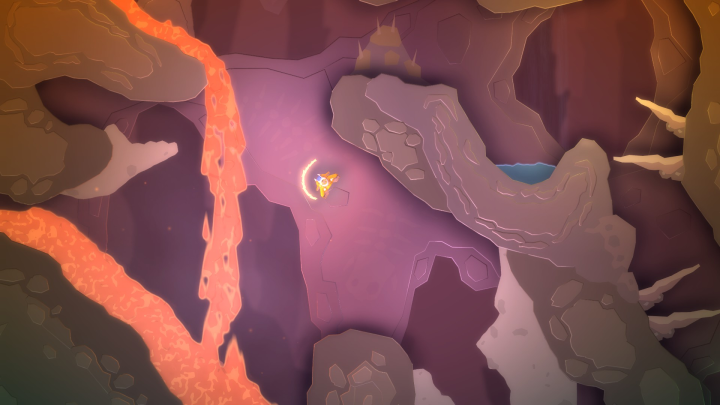 So, how do you deal with lava, other than simply not diving into pools of it? As it turns out, there's many ways to get that pesky and lethal stuff out of the way. Maybe you'll be able to use items to generate large amounts of water to drop into it, turning both into a solid substance you can shoot through. While a lot of the walls in this game are solid, others can be shot through. If you're below a lava pool with one of those shootable walls right above you, simply shoot through it -- making sure to get out of the way -- and watch it all drip, drip, drip through the holes your cannons made. After a brief wait, you'll be able to fly up through that hole to get to new parts of the stage.

Aside from your cannons, you'll have a few other things attached to your ship. A grappling hook allows you to rescue people and grab jewels, as well as snag other things such as those water-generating items and shields that both absorb one hit and protect you from the effects of flying too close to heat-generating substances. While you will take on a bit of heat by using guided missiles, they are powerful and very useful when the action does get a bit frenetic for you to feel comfortable painstakingly aiming your cannon. Also generating heat is a spin move that's good for destroying dirt and shaking off particularly annoying enemies residing in dark areas scattered throughout the final world.

Heh, last worldI'm getting ahead of myself. Before you get there, you'll have had to deal with a lot more hazards than mere lava, such as magnetic fluid, walls of ice blocking you from your objectives and giant eye-like cannons that flood the screen with projectiles. As you rescue scientists, your actions will cause new enemies to spawn, adding danger to previously-cleared corridors. Fortunately, when you start the second world, you'll get access to suits. Located in many of the game's levels after they're introduced, there are a variety of these things, with each giving you something that will help you through the current challenges. A fire suit will allow you to shoot lava to melt that ice, while if you equip an ice suit, your grappling hook can rip through those frozen walls. Hell, in some levels, lava isn't even a bother because you'll get inversion suits. Collect that and you'll be able to fly through lava with no ill effects. On the other hand, those water puddles you'd been using to instantly lower your heat bar now are lethal. Eliminate one hazard, gain another one -- that's gaming for you!

Man, I loved going through those levels. About the worst thing I could say is that I didn't like some challenges quite as much as others, but they all were at least reasonably fun. The game wasn't overly tough, but it did often make me think as to what I needed to do in order to get past hazards to rescue a miner or scientist. There even were a few speed-oriented levels where you had to stay in front of an onrushing flood of liquid, rescuing people and collecting jewels along the way. Just writing this kind of makes me want to stop typing and go through a few of my favorite levels again. 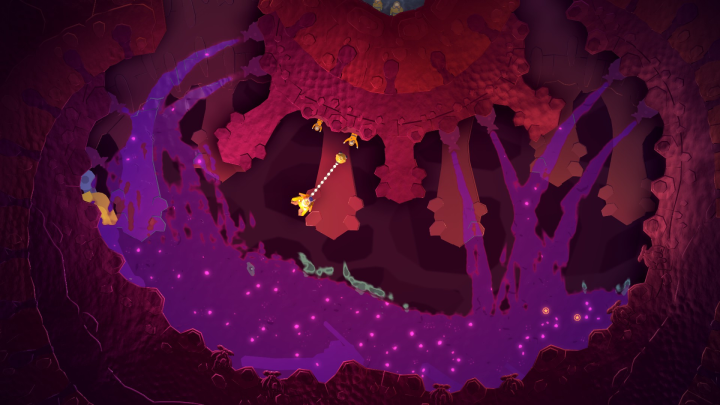 But there is that one flaw that dragged things down a bit. PixelJunk Shooter Ultimate has great levels, but is somewhat lacking when it comes to fun boss fights. Honestly, this is one of those games where I don't even know that having boss fights was all that great of an idea, as those fun in-level mechanics do suffer a bit from being applied to big fights. But there is one such confrontation at the end of each world and I only truly enjoyed one of them because a large part of that fight was a fun homage to classic arcade games like Galaxian.

As for the rest, the first was easy and non-offensive; the second and fourth were somewhat annoying, but not horrible, and the third and sixth dragged on long enough to be near-unbearable. Both were really long and more tedious than anything else. With the third worlds, you had to destroy all these weak parts on a giant machine. No aspect of the fight was particularly difficult, but it took a long time and, oftentimes, one slip-up meant it was time to start over from the beginning.

And then came the final boss -- a massive, six-phase battle where only the final part was actually tough, but when youre replaying those first five for the umpteenth time, lets just say that when frustration has definitely set in, nothing comes easy and Im sitting there wondering exactly why I liked this game in the first place. Heres a bit of unsolicited advice: When you have a fight that goes on forever and two of its six phases are the exact same, maybe you should look into cutting one of those. That might not be the perfect cure for this encounter, but at least its a start!

So, the moral of the story is that fun levels providing a variety of challenges and giving you an equally large set of tools to overcome them are awesome and boss fights that range from pretty fun to who thought this would be a good idea!?!? are not. Are those boss fights a total deal-breaker? Not in the least, but they do detract from what otherwise was a great experience. PixelJunk Shooter Ultimate was everything I asked for and more for the vast majority of my time playing it, but that one flaw did have an effect on my overall opinion, turning what should have been a legitimately great game into one that merely is really good and left me wistfully staring out a window, contemplating what if.
4/5

If you enjoyed this PixelJunk Shooter Ultimate review, you're encouraged to discuss it with the author and with other members of the site's community. If you don't already have an HonestGamers account, you can sign up for one in a snap. Thank you for reading!

© 1998-2021 HonestGamers
None of the material contained within this site may be reproduced in any conceivable fashion without permission from the author(s) of said material. This site is not sponsored or endorsed by Nintendo, Sega, Sony, Microsoft, or any other such party. PixelJunk Shooter Ultimate is a registered trademark of its copyright holder. This site makes no claim to PixelJunk Shooter Ultimate, its characters, screenshots, artwork, music, or any intellectual property contained within. Opinions expressed on this site do not necessarily represent the opinion of site staff or sponsors. Staff and freelance reviews are typically written based on time spent with a retail review copy or review key for the game that is provided by its publisher.