I'm one of those people who downloads a free game from the eShop if it looks even remotely interesting, just in case the publisher decides to pull it later. That way, I secure access to the title down the road, in the event its sudden lack of wide availability fosters in me a sudden urge to finally pay it any attention. When Pokemon Cafe Mix recently became available, I quickly downloaded it with plans to ignore it until the end of time. But my wife gave it a shot and then I did. To my surprise, and I've wound up playing it a lot more than she has these past few weeks.

Pokemon Cafe Mix is a puzzle game for Nintendo Switch (and for smartphone devices) that is played in handheld mode. You operate a cafe and your customers are adorable Pokemon who stop in for tasty beverages and snacks. The more familiar they become with your establishment, the more they warm to the idea of sticking around as employees. Gotta catch 'em all! 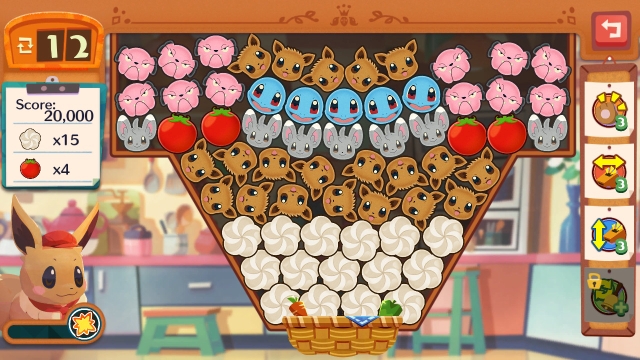 At a glance, the game might look like a match-3 affair. It's not. You do make matches, but in this case that feat is accomplished by tapping an icon and dragging it around the screen to form a chain that wraps around various obstacles and triggers other activity within the time allotted. This atypical approach in some ways feels a great deal more engaging, since you must decide what you want to accomplish with each move and then execute swiftly.

My biggest issue with the game isn't purely the developer's fault. I have a protection shield on my Switch screen and I also don't press hard by default. I'm used to sliding my finger around with a light touch. In the middle of an "intense" round of the game, I sometimes release pressure accidentally while I am forming a chain, which interrupts that chain prematurely. There are only a certain number of turns available to solve a given puzzle (which is typically done by meeting several specified objectives), so a minor fumble sometimes ruins what up to that point was a very nice run. It's frustrating when it occurs, but partly my fault. The developers have also tweaked the game balance since I first started playing, which does seem to have diminished how often I run into that issue.

As I already mentioned, Pokemon Cafe Mix is a free download that also happens to be available on phones. You can probably guess what that means: micro-transactions. But at least for now, they're reasonably implemented. 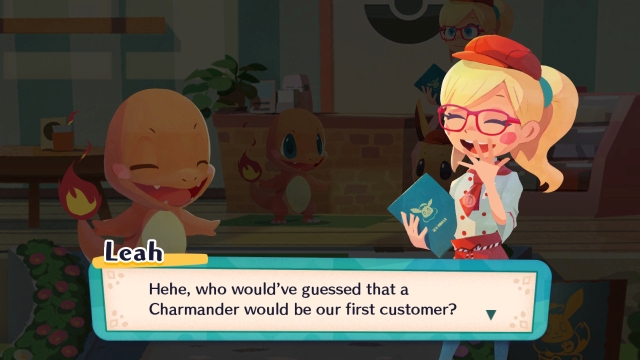 The way things work is that you are allowed several attempts per day to clear puzzles. If you beat a puzzle without failing, that doesn't use up any of your allotted attempts. You can in theory play for hours, provided you don't run into a puzzle that stumps you. If a puzzle does manage to get the best of you, then it's time to potentially make another attempt and use up some energy. Eventually, you'll probably run out of tries and from there you can either wait most of a half-hour for another turn, or spend in-game currency (golden acorns) to revisit the obstacle immediately.

Sometimes, you have additional external pressure. An uncommon Pokemon might be wandering the area and you want to unlock him. If he's your guest and won't remain in the vicinity for much longer, you have reason to spend acorns trying again. Recruiting (and leveling up) the Pokemon that serve as your employees tends to take time, after all, so it's important to make the most of each uncommon opportunity. Or sometimes, a potential ally will stop by with a "friendship bonus" in place that speeds up the process. As you fail a round, you can spend golden acorns to give yourself a few extra moves and hopefully emerge victorious. I'm sure you can imagine how much this setup might tempt a less adept player (possibly including children who aren't as experienced with puzzle games) to take wallet-enabled shortcuts. So far, 148 puzzles into the proceedings, I've resisted that urge.

As you clear additional puzzles, of course the game offers rewards to keep you hooked. You add to your staff and your new employees have attributes that allow them to assist you as you solve puzzles. A puzzle that challenges you with one Pokemon as your helper might suddenly become a cakewalk if you bring along a different one. It's a pleasant loop I found reasonably addictive, and I'm not even a die-hard fan of the franchise. I just make sure to check in daily to snag whatever gift is waiting, and then I usually can't resist the urge to try my hand at a puzzle or ten. 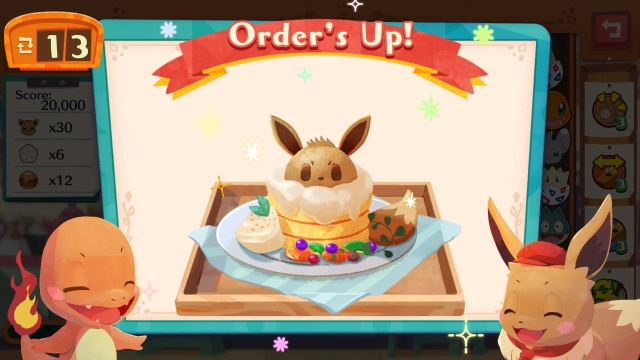 There also are power-ups you can activate throughout puzzles (and even bring along as optional bonus items). New play pieces are also introduced frequently, and the evolving challenge keeps things interesting. For instance, you might have to make three consecutive matches near a single bit of popcorn to heat it up so it pops, a requirement you have to balance with other objectives. Or you need to produce chains that cause item power-ups to drop quickly, and then use those power-ups to break open a pumpkin and then eliminate the gourd. Even though the game tends to take a more active approach to matching pieces, there's deeper strategy that necessarily prevents players from finding success just by scribbling on the screen. The knowledge that micro-transactions exist encourages a miser like me to develop genuine skill, rather than relying on luck and unlimited attempts to advance.

There are of course more nuances to Pokemon Cafe Mix than I can usefully cover here. I'll settle for noting that this one is a surprisingly delightful, reasonably deep puzzle game I find perfect for a few minutes of relaxation before I turn my attention elsewhere. It offers ample rewards for any attention I give it, in the form of potential roster upgrades and cafe improvements, and I can enjoy that entertainment without doing any harm to my bank account. I'm not sure the game's developer will especially appreciate that last point, but it does make the game one I feel good recommending to anyone who appreciates the IP and is looking for something a little different from their next puzzle experience.

If you enjoyed this Pokémon Café Mix review, you're encouraged to discuss it with the author and with other members of the site's community. If you don't already have an HonestGamers account, you can sign up for one in a snap. Thank you for reading!

© 1998-2021 HonestGamers
None of the material contained within this site may be reproduced in any conceivable fashion without permission from the author(s) of said material. This site is not sponsored or endorsed by Nintendo, Sega, Sony, Microsoft, or any other such party. Pokémon Café Mix is a registered trademark of its copyright holder. This site makes no claim to Pokémon Café Mix, its characters, screenshots, artwork, music, or any intellectual property contained within. Opinions expressed on this site do not necessarily represent the opinion of site staff or sponsors. Staff and freelance reviews are typically written based on time spent with a retail review copy or review key for the game that is provided by its publisher.