Welcome to A Remedy For What Ails You, a five-part retrospective on one of my favourite developers. That developer being Remedy, and the game this time being Alan Wake; the third game they made and, of course, the first one I played. A veritable oddball borne from a troubled development, which all but demands you meet it halfway. Hope youve filled up on petrol/diesel or fully charged your battery, because your mileage WILL vary, and Im about to tell you why.

Right out of the gate, Alan Wake makes a very strong statement, and one that its prepared to die on the hill of: the control scheme and combat mechanics are wacky, there are branded flasks to collect, as well as pages of a novel, and the tone is a delirious hodgepodge of Steven King and David Lynch. In a short prologue section, the titular Alan Wake finds himself in a nightmare, where a disembodied voice with the power to summon light gives him a revolver and a torch, and tells him to use them to defend against the Taken. The Taken, who are, naturally, rural folks, shrouded in literal and physical darkness that shields them from harm, which Alan must defeat by burning away the darkness with the torch before dispensing moderate retribution. As unusual as the mechanics and controls youre confronted with are (run is L1!) The prologue does a great job of teaching you the basics quickly, and by the time the section ends, youll have become at least accustomed to the fact that the game has no true reticle, and that Alan always shoots in the middle of the torchs beam. As such, it makes a certain amount of sense that Alan always stands at the extreme left or right of the frame, so that the torch beam is always pointing where you want to shoot. Its an unusual way of doing it, but thats just how things are, in Bright Falls. 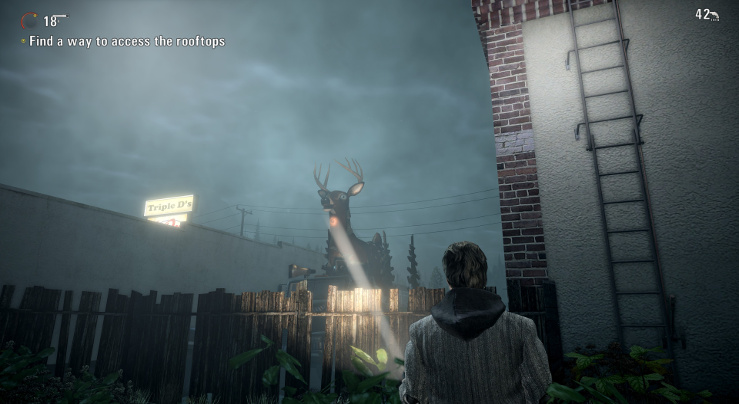 Bright Falls, for the uninitiated, is the setting for the game - a lively and picturesque little town, nestled in the mountains of Washington, standing in for Twin Peaks, and legally distinct from Gravity Falls, Arcadia Bay, or all of Maine. Its a place filled with charming traditions, and even more charming locals, many of whom you get to talk to in the opening portion of the game, before the action proper starts. In fact, its the bits when you arent shooting and running which are among the games more interesting ingredients. Alan Wake himself, for example, is an interesting figure, in that for a protagonist, Alan is often an abrasive character: a writer escaping to the back of nowhere, only to be confronted with rabid fans, radio publicity, and his long-suffering agent, Barry. The interplay between the two of them in particular is great, though thats definitely not a snub to the other characters, like Cynthia Weaver, the light-obsessed local kook, or Thor and Odin, two grizzled and barely coherent biker-lookin dudes who may or may not have had a heavy metal band at some point. In fact, in contrast to the last two titles, theres hardly a loose thread to pull on where the artistic elements are concerned. The story, which sees Alan losing his wife to the darkness is well written, and equally well voiced, leading players on an increasingly crazy journey around the town, fighting hordes of the Taken in a mission to bring the words of a story Alan wrote to life and save his wife. Sound clear enough? Good.

Dont let my ominous opening and the lack of gameplay focus scare you, though, because Im happy to report that the nuts and bolts gameplay is solid. As mentioned before, all of the combat in Alan Wake takes place at night, against the Taken, who are generally a well balanced and consistent threat. With the hook of the game being that you have to burn away their protection before you can hurt them, theres a suite of ways to keep the Taken at bay while you fight. These range from the Taken flinching and slowing down their advances when you focus your torch on them, to flares you can carry, and even the mighty flare gun, which is just about the strangest BFG Ive ever seen in a game. For their part, the Taken hit hard, and without a flare to ward them off, things can get very nasty very quickly. While there arent many enemy models, Taken goons come in a variety of flavours, and juggling two or more enemy types at once is a real challenge. There are also more instrumental threats that crop up, in the form of possessed objects, and crows that mob you all at once, which keeps combat fresh. Thankfully, you arent just limited to your revolver, as you can pick up shotguns - available in double barrelled and pump action forms - and the hunting rifle to bolster your arsenal, for times when you need to really get stuck in. So, between the chunky combat, great environments and weird but fun controls, that makes a great foundation, but as with the rest of Remedys work, theres some special sauce to go over yet.

Unlike the Max Payne games before it, Alan Wake is definitely made with self-aware charm and an unusual flair throughout. Indisputably the coolest bit of flair involved has to be the level where you visit the farm that Thor and Odin used to run, and encounter a stage and amphitheatre. Naturally, the game then has you fight the Taken Hordes on the stage while pyrotechnics blast, and heavy metal plays, courtesy of Old Gods Of Asgard. At other junctions, the game is entirely happy to poke fun at the Max Payne games, even going as far as to have the lead writer appear on an in-game TV spot and make the infamous face. That face can also be seen by following one of the incongruous QR codes that pop up at intervals throughout the game, provided youre playing the PC version. Oh dear, I mentioned the PC version.

Unfortunately, Alan Wake on PC is a bit of a mess. Though it doesnt do anything so awful as not launch at all, it nonetheless has the worst graphics of any game in this review series, which is saying something when its going up against a game from 2001. In stark contrast to the Max Payne games, the environment, lighting and texture work lack the same care and attention that Ive come to expect. Even on PC at 4K, with all settings cranked to max, I still saw gnarly textures, nasty pop-in, and absolutely no indirect lighting from the torch. Puzzlingly, the game doesnt actually look better at max settings, either. In fact, if theres a difference between max in min settings, that difference is a framerate drop. As such, I recommend putting the game on the highest resolution you can, killing all settings, and just dealing with it. What also cant be fixed in the graphics settings, is the gross product placement throughout the game, which includes an entire verizon ad on the TVs and massive billboard ads for the energiser batteries you put in your torch. An odd product placement, seeing as the batteries in Alans torch die really fast. Energiser batteries: good against the Taken for eight seconds. 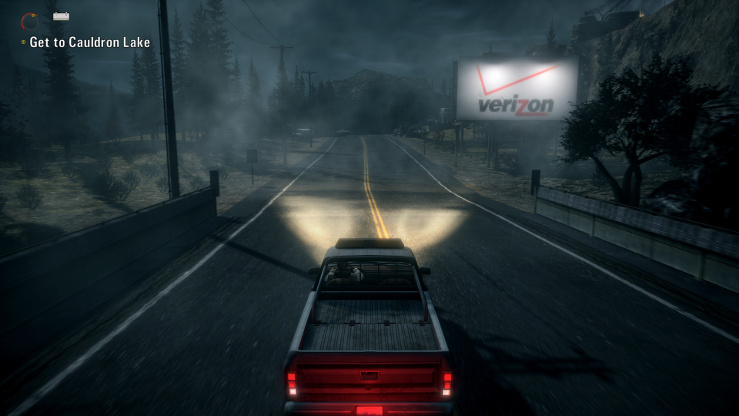 Sadly, there are some other, gameplay related issues that hold Alan Wake back, the worst being a direct result of the games troubled development. The upshot is that Alan Wake started life as an open world title, but became a linear experience at the eleventh hour, and when you know that, the weirdly directionless level design makes sense. The levels in Alan Wake are often vast and empty for large sections. It is possible to spend extended periods of time in forest areas at night, with little of interest around you, and only a light in the distance and a marker next to your health bar to tell you where to go.

Most disappointingly though, the same core gameplay I praised earlier has some wrinkles in it that need to be addressed, first being the astoundingly lame pump-action shotgun. In its double-barrelled form, the shotgun has a tighter spread, greater damage, and a short reload. By comparison, the pump action shotgun has worse audio feedback, worse spread, and substantially less damage, as a tradeoff for its eight-round magazine. While I understand the need for weapon balance, I think a better solution would have been to limit the shotgun ammunition more in the later levels to prevent players just indiscriminately blasting, or remove the pump-action gun entirely. Along with that is an issue with scaling on the torch upgrades. Alan can pick up different torches throughout his adventure, from a starting torch, to a heavy-duty lantern; the problem is, the increase in power at the top end of the scale isnt very clear. Its worth picking up torch upgrades, but that upgrade never feels significant. Finally, while all the other mechanics pass muster with varying colours, the same cannot be said for the woeful driving. The fact theyre uncommon and short is either evidence of a loving god, or intervention by the developers, but whichever answer suits you best, the bottom line is that driving in Alan Wake sucks. With a handling model that falls right in the swamp between arcade controls and simulation style driving, youll mostly find driving a joyless experience. Finally, continuing the trend of awful platforming in Remedy games, Alan Wake features platforming sections, but Alan just moves too slowly and controls too heavily for platforming to be anything more than a chore. 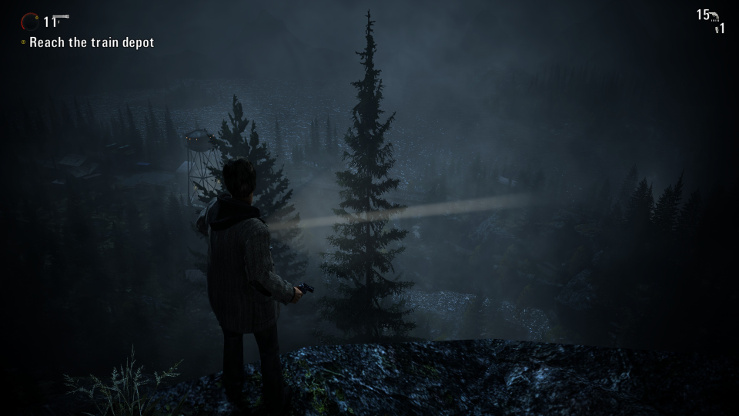 And so, with another Remedy game in the rear view mirror, I find myself at a painful conclusion: Alan Wake is the Remedy title I like the least. Though loved by fans, and an admirable attempt to try something new, Alan Wake just has too many blemishes to recommend without asterisks. From the hinky control scheme to the platforming, theres always some small thing holding the game back from greatness. That said, its important to remember that all those caveats are hanging off a game that is still, for the most part, a good time. Strong voice performances, great music, solid gameplay, and personality all hold the game together. Having now completed it twice, I can firmly say that when Alan Wake is at its best, all those troubles fade into the background. Its fundamentally a good game, just one hobbled by oversight and limitations.

Now, if youll excuse me, Ive got to shoot some Taken.