This review is going to contain some spoilers for the original visual novel Steins;Gate. Steins;Gate My Darlings Embrace is a spin-off of dubious canonicity, and would not make one bit of sense if you havent experienced the original story in some form. This review probably wont make much sense if you arent familiar with the story and the characters.

My Darlings Embrace was exclusive to Japan for a very long time. It launched back in 2011 on the PS3/PSP/Xbox 360. It was only just ported to PS4 for western audiences around the end of 2019. It feels like a product of its time - the gender identity issues with Luka arent always handled sensitively, although since the entire story is told from Okabes point of view, it is at least in character. The translation is rough, too. There are a lot of spelling and grammatical errors, and plenty of instances where the wrong word is used. It doesnt look like they bothered to get a second set of eyes to read over it before the title shipped.

An issue from Steins;Gate remains unfixed - words containing an apostrophe are sometimes interrupted with a line break, so the s is dropped to the next line. My Darlings Embrace uses the same interface and mechanics as the original  the story will play from start to finish, with your only input being a mobile phone. You can respond or ignore messages from the other lab members, which adds a few interesting bits of characterisation depending on how you respond to them.

Most of the artwork is from the original visual novel, with some new artwork added to supplement the new stories, locations, and costumes. A lot of the music is also the same, with a few remixes thrown in. The opening movie music track is terrible  it almost put me off this visual novel entirely, but fortunately it is an isolated incidence of obnoxiousness. 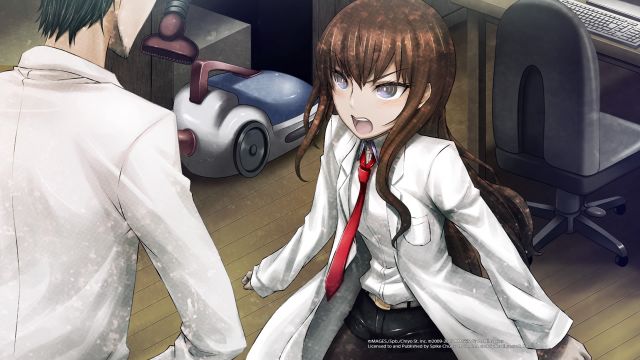 As familiar as I am with these characters and everything theyve been through, I found this story incredibly jarring at the start. Okabe Rintaro (or the Mad Scientist, Hououin Kyouma as he prefers to be called) is experimenting with sending emails to the past. He ends up on a different timeline entirely where everything is framed as a romantic comedy. Chronologically, this offshoots from around the first quarter of the original story  all the characters know each other, but none of their secrets or complexities have come to the forefront yet, and the plot is still revelling in its light-hearted anime silliness. The first part of this plot shows our characters enjoying each others company. Okabe and Kurisu bicker constantly, and it took time for me to adjust going back this far in their relationship.

The first few hours of My Darlings Embrace feels like a slice of life for the Future Gadgets Lab and the eight lab members. The story jumps around and hints at the potential plotlines that can play out across the visual novels six story paths. Unlike the original where there was one main narrative with ending paths splitting off at certain points, here all the divergent story paths break off at one moment. You can just save the game and then explore each route until the end. I reached the end of one path at a mere six and a half hours of play but completing everything this title had to offer took me a bit over thirty hours.

In Steins;Gate, you generally know as much as Okabe does as he recklessly experiments with changing history and deals with the consequences. But because these stories branch off much earlier, you end up knowing a lot more than Okabe, since you know these characters and all the twists and turns of the original story. My Darlings Embrace deftly uses your prior knowledge of these characters to either subvert your expectations or for comedic effect. The stories told here manage to explore these same revelations, but from different angles. 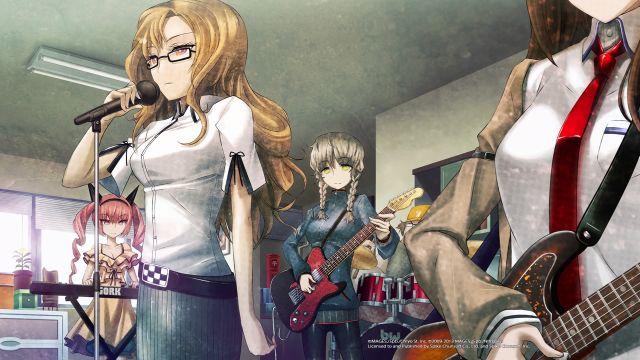 For example, in the original story, Moeka ends up betraying the group, but since theres no enemy here because the lab members havent caught the attention of SERN, she is given a lot more to do in the story. There are moments that have some tension because as a viewer, were inclined not to trust her, but then the story offers a few surprises that give some much-needed depth to this character, making her a much more sympathetic figure.

These characters are well-defined and versatile enough that the story can drop them in different circumstances, such as them forming a band, or getting jobs at Fariss maid café, or dealing with the fallout of one of their scientific gadgets when the experiment goes awry. Suzuhas story takes a Back to the Future turn when she accidentally leads on her father, Daru, and he falls in love with her. Mayuris story is particularly sweet, as Okabe must confront the fact that his childhood friend has grown up.

My Darlings Embrace is a tough sell. If you can happily enjoy a story where all the stakes are personal without the large-scale conflicts and threats, then youll enjoy this, even if the pacing is a bit slow in places. If youre looking for something that matches the tone of the latter half of Steins;Gate, then this is not for you.

If you enjoyed this Steins;Gate: My Darling's Embrace review, you're encouraged to discuss it with the author and with other members of the site's community. If you don't already have an HonestGamers account, you can sign up for one in a snap. Thank you for reading!

© 1998 - 2022 HonestGamers
None of the material contained within this site may be reproduced in any conceivable fashion without permission from the author(s) of said material. This site is not sponsored or endorsed by Nintendo, Sega, Sony, Microsoft, or any other such party. Steins;Gate: My Darling's Embrace is a registered trademark of its copyright holder. This site makes no claim to Steins;Gate: My Darling's Embrace, its characters, screenshots, artwork, music, or any intellectual property contained within. Opinions expressed on this site do not necessarily represent the opinion of site staff or sponsors. Staff and freelance reviews are typically written based on time spent with a retail review copy or review key for the game that is provided by its publisher.