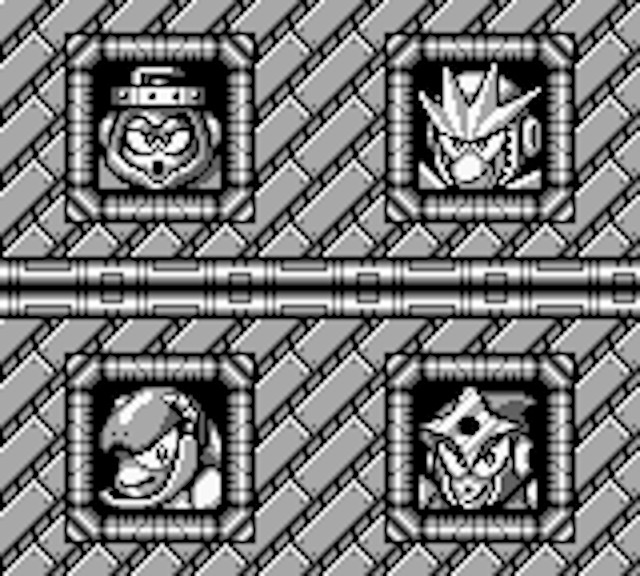 Do you enjoy extremely long jumps in platformers? Do you like to see them used to such an infuriating extent that they could drive you to a life of crime? How about enemies that constantly take cheap shots? Overlong levels? Extremely demanding mechanics that wear you down rather than excite you? Then the Game Boy rendition of Mega Man III is just for you!

Yes, this title turns away from Mega Man II's super short stages and plain design, returning the portable series to its maddening roots. It seeks to deliver what its predecessor couldn't, with fully fleshed out levels, stiff challenges and an actually engaging experience. It also dodges other stumbling blocks that plagued the second entry, such as Mega Man's mechanical dog Rush. In the previous installment, you get Rush's jet upgrade almost right away, and it negates a lot of the game's challenge factor by letting you skip whole set pieces. This time, you don't acquire Rush Jet until the second half of the campaign, and even then the developers imposed some movement limitations that prevent Rush from going anywhere you wish.

As with the prior two games, this one features mostly borrowed assets and bosses. Dr. Wily first sends four familiar Robot Masters from Mega Man 3 on NES after our hero: Snake Man, Gemini Man, Spark Man and Shadow Man. Each boss waits for you to kill him and take his weapon, so you can expose another boss' weakness--just like in every Mega Man title. It should come as no surprise that their levels in this installment mirror the ones in the console edition, although their layouts are slightly different this time. Regardless, you still run afoul of a lot of the same perils: snake head-shaped turrets, giant penguins with massive cranks sticking out of their skulls, traps that send jolts of electricity through your body and time bombs that double as platforms. 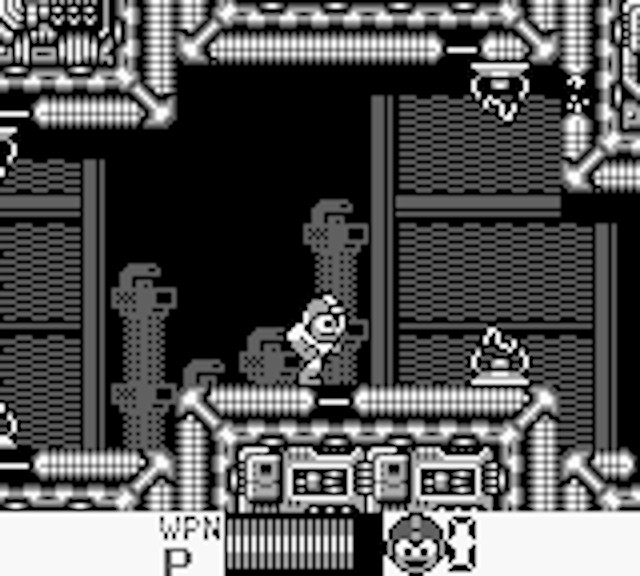 For the most part the early challenges are manageable, mainly featuring standard platformer tropes and the occasional special segment. You negotiate situations like appearing/disappearing platforms or destructible environments that change into foes when shot. However, you might notice right away that plenty of adversaries leap out of the side of the screen before you can dodge them, and can only be dealt with if you happen to be shooting like mad before they arrive (and that's assuming they aren't armored enemies who deflect projectiles). Otherwise, they collide with you before you can respond, effectively getting in a hefty sucker punch.

On top of that, a few segments sport spacious pits that require you to leap from the very edge. If you're off by even a fraction of a hair, you'll fall to your death. This also occurs with combinations of narrow gaps and short ceilings, where you hit your head and end up missing the opposite ledge if you don't hop at the last second. Thankfully, you only bump into a few of these stressful sections early on, so they don't wear out their welcome right away.

After you've eliminated the primary quartet of Robot Masters, you complete a short transitional stage and then challenge the next tetrad. from NES's Mega Man 4: Skull Man, Dust Man, Dive Man and Drill Man. Now the true nightmare begins... 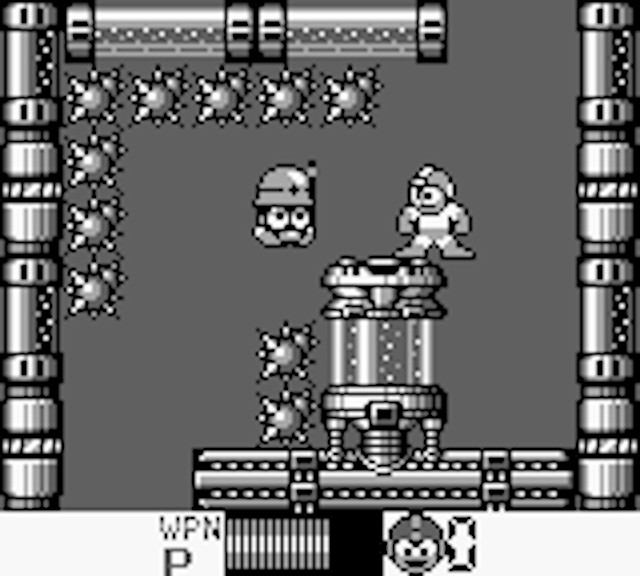 Past experience or GameFAQs tells you to go after Dust Man first, and it's there the game goes completely off the rails. Nearly every platforming scene in his stage showcases a long jump or two, and numerous spots hit you with nearly unavoidable ambushes. On top of that, the stage's length proves so daunting that you sometimes wonder if you aren't on some kind of endless mode. Think about that now: an overlong level full of instant-death situations and cheap shots, where you only have a limited supply of lives at your disposal. You're not only in for the long haul, but one that demands such a stellar performance that it grows exhausting before long.

You hope that this level is just an outlier and that the rest provide the same level of decent action as the primary four. Sadly, the remaining three Robot Masters hit you with the same sort of cheapness and patience-devouring set pieces, and the game as a whole becomes wearisome as a result. Worse than that, most of the content on offer consists of rehash from superior titles that's somehow weaker than before. For instance, you once again deal with a scene in Dive Man's domain where the water level constantly rises and lowers. Meanwhile, spikes crop up everywhere, potentially destroying you if you attempt to jump over them when the water level is too low. This segment worked fine in Mega Man 4, but this installment constantly barrages you with nearly unavoidable foes while you're mid-jump over those spikes. I'll admit that I appreciate a good challenge, but design like this comes off as malicious. 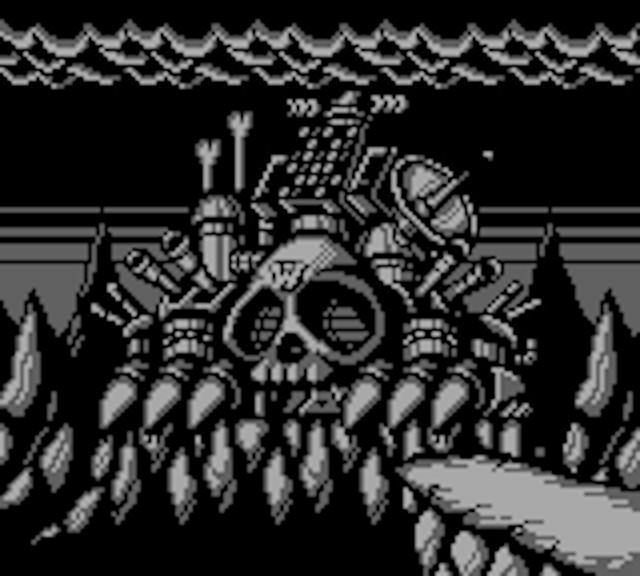 I predict that most people won't make it past Wily's fortress--which is mercifully a single stage this time, rather than four or five. There, you blast your way through a nightmarishly long gauntlet that's filled with all of the harshness mentioned earlier. It's so long that it offers two checkpoints, plus a mid-boss. And if you die after defeating the mid-boss, you have to fight it again. Because that's what this game needed: a super challenging level that punishes failure by forcing you to replay the most aggravating scenes repeatedly. Hell, that's sums up the latter half of this campaign. It's an entirely joyless affair that's mediocre at best, but frustrating and cheap at worst.

To me, it seemed like Mega Man III was trying really hard to not be Mega Man II. It sought to offer more challenging situations and essentially remix previous stages and hazards. However, in its attempt to distance itself from its extremely easy older brother, it became something worse: an adventure so rife with needlessly difficult and apparently mean-spirited moments that it's anything but "mega."

If you enjoyed this Mega Man III review, you're encouraged to discuss it with the author and with other members of the site's community. If you don't already have an HonestGamers account, you can sign up for one in a snap. Thank you for reading!

© 1998-2021 HonestGamers
None of the material contained within this site may be reproduced in any conceivable fashion without permission from the author(s) of said material. This site is not sponsored or endorsed by Nintendo, Sega, Sony, Microsoft, or any other such party. Mega Man III is a registered trademark of its copyright holder. This site makes no claim to Mega Man III, its characters, screenshots, artwork, music, or any intellectual property contained within. Opinions expressed on this site do not necessarily represent the opinion of site staff or sponsors. Staff and freelance reviews are typically written based on time spent with a retail review copy or review key for the game that is provided by its publisher.