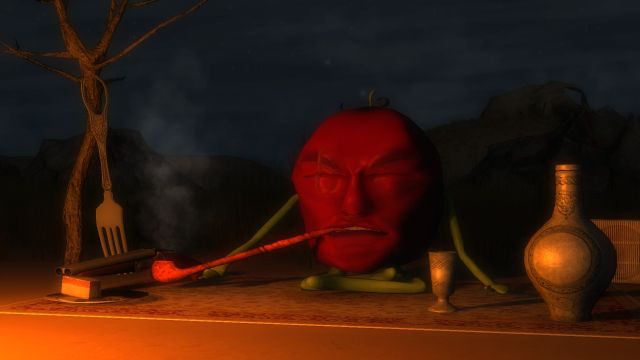 This may come as a surprise to some folks, but there are people out there who actually like to watch awful movies. Hell, there are even sites devoted to this concept. I happen to be one of those people, a man who's seen "The Godfather" exactly zero times, but has watched enough Troma and Full Moon films to practically recite their scripts. Strangely, this phenomenon of ironically enjoying flawed fiction isn't as prevalent outside of film. You really don't see "Badnovels.org" or "Badoperas.org" or "Badvideogames.org." Still, you do occasionally find works that garner small "good-bad" fan followings, such as the indie FPS Tomato Way.

This title offers something along the lines of a story, but don't bother following it because it's nonsense anyway. The most I can gather is that you're an anthropomorphic tomato named Tomate, who's armed with a fork that slices his opponents in half. He's apparently on some kind of mission, but that's the most I can tell you. The storyline is so damn weird that it's hard to say anything about it for certain. For the most part, all of the strangeness you encounter comes off as a bunch of surreal imagery for the sake of surreal imagery.

In the first stage, you battle through a bar that's actually a front for some kind of diabolical experiment. Early on, the patrons transform into zombie-like monsters or watermelon-beetle hybrids with human faces on their bellies. At that moment, you do the frenetic shooter thing and run in circles while madly swinging at your fork at your foes, chopping them into pieces that you can eat to restore health. Meanwhile, the animation turns rather choppy and your movements glitch. Occasionally, you'll hit an awkward spot on the floor and launch into the air or get stuck on nothing. Get used to this because it happens throughout all three levels of the campaign. 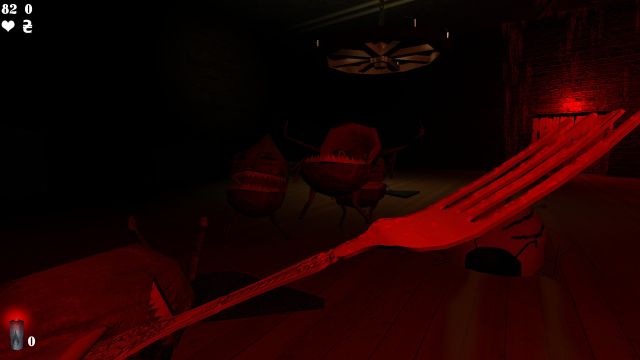 Chapter one's madness continues after the first fight. From the dive's entrance, you venture down plain hallways and into rooms filled with all manner of disturbing details. Bodies hang from hooks and tomatoes sit in cages, waiting for you to liberate them. Sadly, the unlucky ones have found themselves rigged up to machines that apparently juice them, using the fluid to create or summon the melon monsters I mentioned earlier. Again, I'm not sure if I'm interpreting these set pieces correctly, but that's what seems to be going on.

Regardless of the sights you glimpse here, the stage proves overlong and repetitive. Never mind that this game is allegedly supposed to look and act like a shoddy horror title, nothing excuses long corridors full of the same stale combat ad nauseam. Worse than that, damage ratings are inconsistent, resulting in totally unbalanced fights. Sometimes you slay an enemy quickly using just the fork, and other times you can't even drop the same creature with a shotgun blast at point blank. Likewise, you take inordinate amounts of damage out of nowhere. During my playthrough, for instance, a melon-beetle one-shot me when my health read 72. Any other time, a single strike subtracts maybe fifteen hit points at most.

You'd think the experience would improve after stage one, or at least find ways to entertain you with its awfulness. However, the next level consists of a whole lot of nothing, where you run straight for miles through a small, ruined burg. Your environs here consist of empty, white terrain; burning houses; and foothills in the distance. Your only points of interest are a house with mechanical legs and minotaur-like monsters hungry for tomato flesh. You really don't need to engage them, since you can outrun them easily. Eventually, you arrive at a police station and fight another boss, then run or drive another mile or so to a city, all while fighting off more minotaurs and hoping you don't get stuck on nothing. 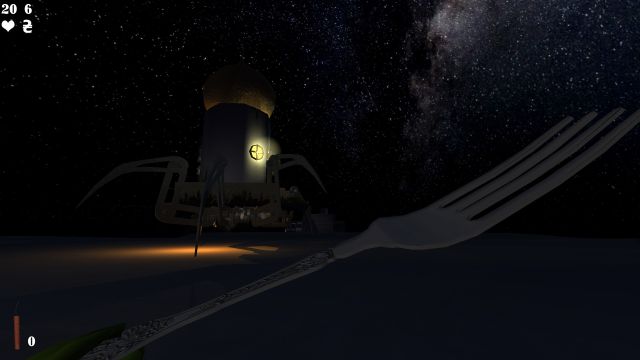 And that's it. You spot hardly anything zany or "psychedelic" about this stage, and it comes across as filler. More than anything, it's an empty, meaningless segment that adds nothing to the campaign and feels tame in comparison to all you've witnessed so far.

At last, you reach the final level: a ruined hospital that's just as brief as the previous stage. Cucumbers attack you, requiring you to either empty an entire machine gun clip into them or tediously lure them over to a pair of flamethrower-toting soldiers, who eliminate them with ease. If you don't vanquish these guys immediately, they will absolutely destroy you. They close in on you, clip through your body and pelt you with blows, and there's next to nothing you can do about it except die. 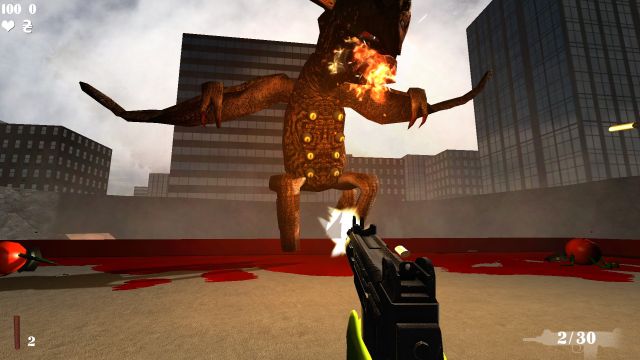 After some time, you encounter a dragon that looks suspiciously like Rodan from the 1960s. Not only does this dude roast you with his flaming breath, but he also constantly summons the cucumbers from earlier. Here, the game's worst elements are on full display. Every technical issue you've had up to this point plagues you while you take on this final boss, including lag and bits of environment that send you flying. If you wish to win, you need to ignore these snags while observing your surroundings and remaining aggressive. Ultimately, though, this conflict turns out to be a needlessly frustrating, albeit fairly basic, boss encounter.

I've heard some folks claim that Tomato Way is a parody of awful PC fare, or that it's supposed to be the "Troll 2" or "The Room" of video games. Honestly, I'm not seeing it. Flaws in a film can work to its advantage by turning it into an inadvertent comedy. That notion doesn't typically ring true for games because of their interactive nature. When a title flounders, it becomes less desirable because it's not as playable or exciting. This piece demonstrates that with its overlong, barren stages and buggy mechanics, not to mention clunky combat. I get that you're not supposed to take this adventure seriously, but that notion doesn't make its flawed content any less of a waste of time.

If you enjoyed this Tomato Way review, you're encouraged to discuss it with the author and with other members of the site's community. If you don't already have an HonestGamers account, you can sign up for one in a snap. Thank you for reading!

© 1998-2021 HonestGamers
None of the material contained within this site may be reproduced in any conceivable fashion without permission from the author(s) of said material. This site is not sponsored or endorsed by Nintendo, Sega, Sony, Microsoft, or any other such party. Tomato Way is a registered trademark of its copyright holder. This site makes no claim to Tomato Way, its characters, screenshots, artwork, music, or any intellectual property contained within. Opinions expressed on this site do not necessarily represent the opinion of site staff or sponsors. Staff and freelance reviews are typically written based on time spent with a retail review copy or review key for the game that is provided by its publisher.