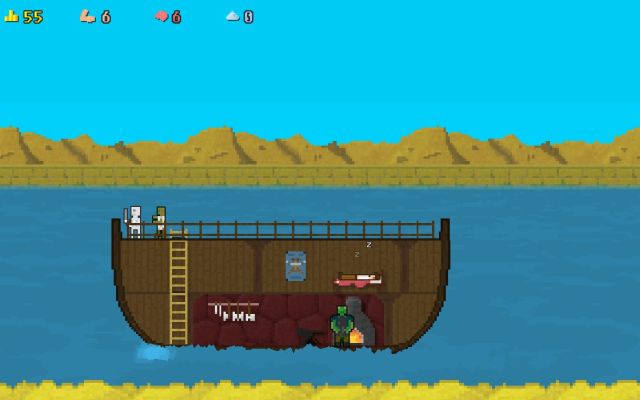 The last thing I expected to find during a deep dive of Steam's database was a sequel to the puzzle/dungeon crawler hybrid 10000000. And the last thing I expected from said follow-up was a huge improvement over its predecessor. Yet, here we are, discussing You Must Build a Boat because it's almost everything the first title should've been while maintaining the original's mechanics and concepts.

As before, the familiar Pitfall Harry-esque hero leaps out of bed at the beginning of each session, but this time while aboard a small boat. A few small clicks guide you to the dungeon itself, where you begin "exploring." There, your standard puzzle grid appears, holding tiles bearing swords, wands, crates, muscular biceps, brains, keys and shields. To match three blocks, you need to slide a row or column horizontally or vertically, respectively, and there's no limit to how far any one can be slid. When a match occurs, the pieces shatter and new ones replace them, sometimes creating combos. You know, basic match-three stuff...

Above that grid, the protagonist sprints through the battleground, with a variety of backgrounds and catchy tunes adding a bit of character to the once-sterile environment. He advances to the right until an obstruction appears, then he stands in place and begins moving to the left until you clear it. If he touches the left-hand side, he's done for. You end that particular dungeon run, collect your loot and start over. However, you can prevent that grisly fate by matching the appropriate tiles below. When you encounter a monster, for instance, collecting wands and swords allows your character to strike and eventually kill it. Sometimes, though, you bump into treasure chests that require you to match keys, rewarding you with money or items to sell. 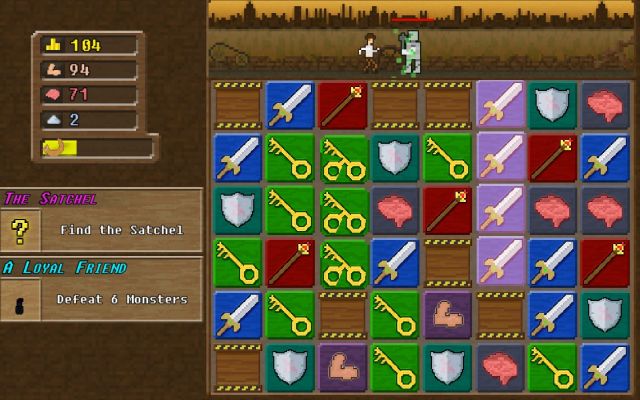 A few other plates also help out if you're in a jam. Shields provide additional defense when matched, and crates occasionally drop food (which moves you to the right when consumed) or spells (which either damage or de-buff enemies or provide you with a buff). The muscles and brains don't aid you in the dungeon, but act as forms of currency in addition to the gold you amass.

You don't typically last long when entering a new area. The creatures there overpower you, forcing you to the left with each blow you sustain. Thankfully, as you advance through the campaign, you add new portions or crew members to your boat that turn you into a bigger badass. By rescuing NPCs, new shops and features open up, allowing you to upgrade your weapons or shields, sell your precious loot, evolve your spells or even tame monsters you've captured. Adding these beasts to your team, in turn, grants passive bonuses that boost your damage rating, bolster your defenses or up the spoils of each dungeon run.

These new additions to your boat come as rewards for completing quests that pop up each time you enter the fray. Before embarking, you get the option to add up to three objectives. Some of them are pretty reasonable, like "kill X of a certain foe." Others, however, might have you pulling your hair out, such as one that requires you to match over fifty squares of a particular type in a single run. That might sound like a tall order, but believe me, it can be done. Thankfully, none of them require you to score ten million points in a single outing, and even the final missions in this installment are quite doable. 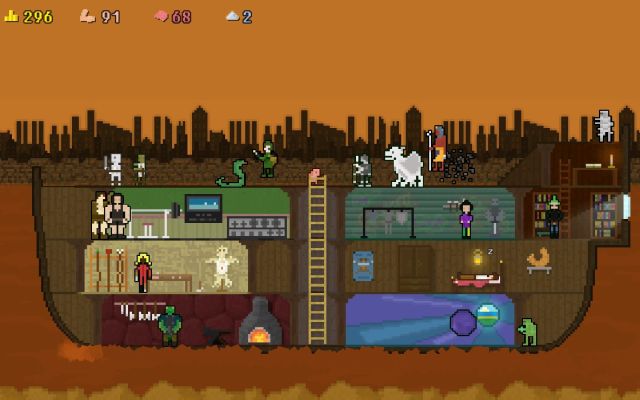 Depending on your priorities, your strategy when entering the battlefield will vary. You don't always hop in and start mindlessly matching, although sometimes doing that can help accomplish certain goals. For instance, during my own playthrough, I wouldn't have gotten through some of the more exhausting missions if I didn't cycle through pieces as quickly as possible. Other times, though, I had to reserve some of my best matches for particular circumstances. Near the end of the affair, I had to kill an adversary called a "reaper" without taking damage. The only way I found to satisfy that condition was to preserve a freeze spell until a reaper spawned. That meant cracking open as many crates as I could until the icy magic appeared, then hoping I had enough weapons left over to finish the job before it thawed out. Obviously, I had to preserve my arsenal as much as possible, and not recklessly blow through those bricks.

Unfortunately, you occasionally stumble upon a situation where the board refuses to spawn the tiles you need, or it merely drip-feeds them to you. You might run into a dragon or witch when your offensive squares are low, or bump into a chest and find your keys too scattered to match properly, or meet a huge box holding a legendary item. In order to get past those, you need to clear the random requirements floating above them (e.g. five wands and six brains, etc.). You often won't have an adequate number of items to finish the job, and getting them to spawn is like pulling teeth. Times like these reinforce the notion that you're at the game's mercy, and sometimes you'll perish as a result of rotten luck. 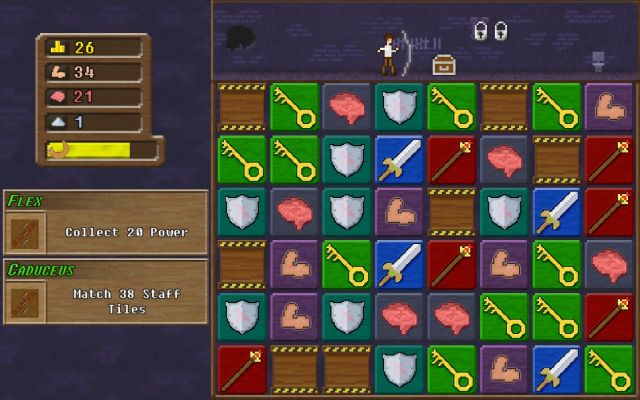 You might consider giving up after such disappointment, but then an itch in the back of your mind tells you to play just one more game, because you almost have enough money to upgrade your sword or buy another artefact. So you replay one more time five additional times for the next hour until the sun peaks over the horizon, realizing you've completed a ton of missions (including the one that was giving you trouble), shelled out boatloads of cash for some fantastic upgrades, recruited a few new monsters and advanced two stages.

Seriously, that happened to me. I finished a session and went to bed, only to realize as I was going to my room that there was light coming in through the kitchen. I also decided to make quick funeral arrangements because my wife wasn't going to be thrilled with my inability to track time...

I might be dead now, but at least I got to play You Must Build a Boat. In some ways, it feels like a happy ending to an initially downbeat story. 10000000 left a bad taste in my mouth, despite some of its high points. I really wanted to see justice brought to its core concept, and I'm glad its developer, EightyEight Games, expanded upon it with greater success. They crafted an addictive, time-devouring blend of match-three and dungeon crawler that hits the right notes and only falters infrequently.

If you enjoyed this You Must Build a Boat review, you're encouraged to discuss it with the author and with other members of the site's community. If you don't already have an HonestGamers account, you can sign up for one in a snap. Thank you for reading!

© 1998-2021 HonestGamers
None of the material contained within this site may be reproduced in any conceivable fashion without permission from the author(s) of said material. This site is not sponsored or endorsed by Nintendo, Sega, Sony, Microsoft, or any other such party. You Must Build a Boat is a registered trademark of its copyright holder. This site makes no claim to You Must Build a Boat, its characters, screenshots, artwork, music, or any intellectual property contained within. Opinions expressed on this site do not necessarily represent the opinion of site staff or sponsors. Staff and freelance reviews are typically written based on time spent with a retail review copy or review key for the game that is provided by its publisher.