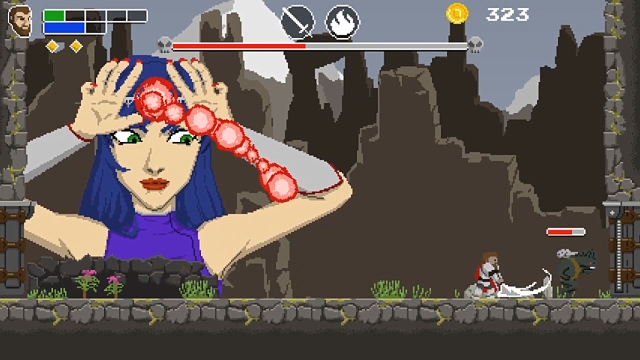 I buy an obscure 2D platformer on Steam or Switch, I eventually play it, it disappoints me, I vow to start vetting my purchases more strictly, and finally I don't. I end up with another title in the same category as before, mostly because I found a screaming deal that couldn't be ignored. Like Bill Murray's character in the film I referenced above, I find myself in an endless, familar loop, fearing I'm unable to break out.

Recently, I picked up Aldred Knight (formerly Aldred: Knight of Honor) on Switch, a medieval-themed platformer where an armored warrior cuts monsters to bits, avoids obstacles, farms cash for basic upgrades and battles an antagonist guilty of some vague evil. It sounded serviceable enough and it was cheap, so I figured I'd give it a try. Upon firing the game up, I swear I could hear Sonny & Cher somewhere, belting out "I Got You Babe."

I realized what I was in for the instant I moved the protagonist. Rather than rushing toward his opponents at a satisfactory speed, he gently plodded along as if his quest consisted of checking his mail and grabbing the morning paper. Things worsened when I engaged my first foes in stilted, choppy (no pun intended) combat. I was unable to move about while striking, my body completely halting any time I swung my sword. While that might not sound like much of an issue, the constant stop-and-go motion killed the pacing enough to turn this already-bland adventure into an overlong slog. 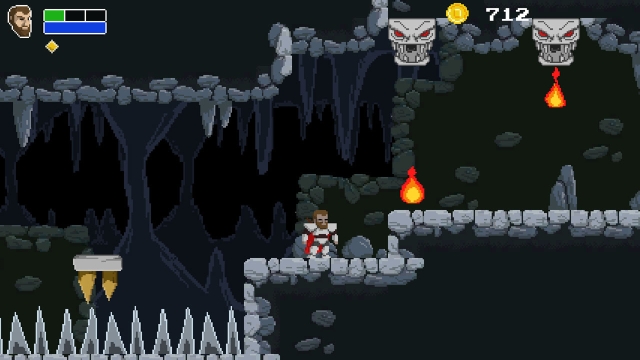 On the bright side, the game's stages weren't merely straightforward trudges to a finish line. They branched here and there, offering routes that led to hidden treasures and extra objectives meant to reward exploration. However, most of the goodies I found only served to extend this tedious affair, ensuring that I would spend more time watching my character jovially stroll through this hellscape. Few of those prizes altered the experience or seemed to unlock anything worthwhile.

Obstacle courses inhabited the spaces in between objectives, because of course they did. In a post-Meat Boy world, there was no way I was going to get through this journey without dodging a saw blade or two. And this title really put me through the wringer with miles of spikes, flamethrowers, Ferris wheel-like contraptions and all manner of pixelated torture devices. As you can imagine, I died a lot. I'd traipse through a gauntlet of hazards and get my face beat in, sometimes while riding a moving platform. By the time I reached the end of the segment, I had maybe a single chunk of health left. Occasionally, I'd get lucky and make it to a checkpoint without incident. Often, though, I'd jump down from a platform land on an off-screen enemy or trap I couldn't possibly have known about.

...and then I'd have to start over and slowly, slowly make my way back to where I left off, only to possibly perish again.

Up to this point, I could have described any number of 2D platformers available these days because so many of them abide identical standards. Look, I'm not going to knock a game for a lack of innovation, because almost all media we experience is comprised of recycled material. Rather, Aldred's biggest downfall was its inability to stand out in a saturated genre despite its lack of originality. 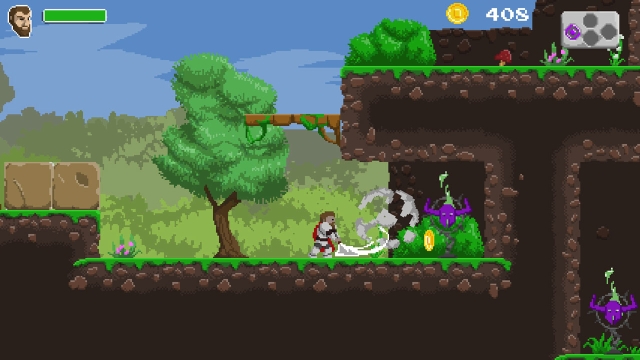 Repetition reared its ugly head, much like in that eerie, aforementioned comedy flick. In every stage, I fought the same impressive array of goons and performed familiar tasks ad nauseam. Yeah, it was cool to see a varied bestiary, but I slayed pretty much all members of that list in every stage. The same went for any platforming situations and obstacles courses, because scenarios got rehashed pretty often with only a slight bump up in regards to challenge factor.

With the exception of some boss encounters, I didn't come across much content used to give levels or scenes their own identities. I labored through numerous areas that utilized the same environs and background images, composed of tired, old real estate without much flair. For once in my life, I prayed for stereotypical stage themes. I begged for an ice cave, a volcano, a desert or an aquatic mission just to break the visual repetition. Because of this, all of the levels ran together, creating an ultimately forgettable fantasy platformer. 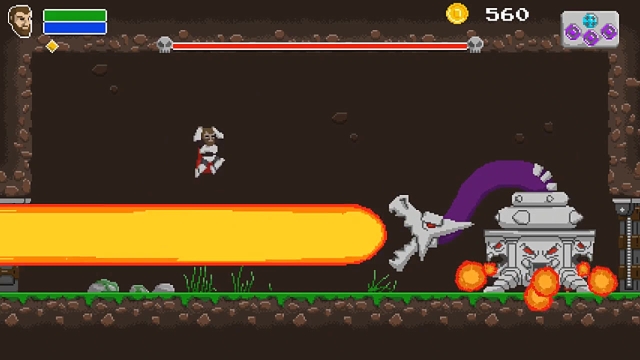 And it's a shame, too, because the game really did have a few high points. One scene, for instance, involved a mage boss who created moving walls that attempted to either crush me or impale me on spikes. The only way to get around them was to cut through their weak spots with an axe. After that, I had to race toward the villain and strike him before he leaped to the other side of the room. Hell, some of the obstacle segments were entertaining, too, like one where I had to walk beneath a platform while fire rained down above me. The trick to that section was trying matching the platform's speed. If I lagged behind or trotted too quickly, I got singed.

Eventually, I emerged victorious, exited the game and uninstalled it. With an underwhelmed huff, I got up to place my Switch back on its dock, only to remember that Nintendo eShop exists. I figured I may as well check it before move on with my life. I perused the digital marketplace, looking for another title to wishlist. Instead, I found some rough-looking 2D platformer that sounded like something I might not hate. I sat down and browsed the game's page, forgetting about the repetitive action title I just played, ignoring the fact that its dull levels and monotonous tasks nearly put me to sleep. What was it called? Alfred Night? Eh, well, if it was that easy to forget, then it's best not to think about it...

If you enjoyed this Aldred: Knight of Honor review, you're encouraged to discuss it with the author and with other members of the site's community. If you don't already have an HonestGamers account, you can sign up for one in a snap. Thank you for reading!

© 1998-2021 HonestGamers
None of the material contained within this site may be reproduced in any conceivable fashion without permission from the author(s) of said material. This site is not sponsored or endorsed by Nintendo, Sega, Sony, Microsoft, or any other such party. Aldred: Knight of Honor is a registered trademark of its copyright holder. This site makes no claim to Aldred: Knight of Honor, its characters, screenshots, artwork, music, or any intellectual property contained within. Opinions expressed on this site do not necessarily represent the opinion of site staff or sponsors. Staff and freelance reviews are typically written based on time spent with a retail review copy or review key for the game that is provided by its publisher.