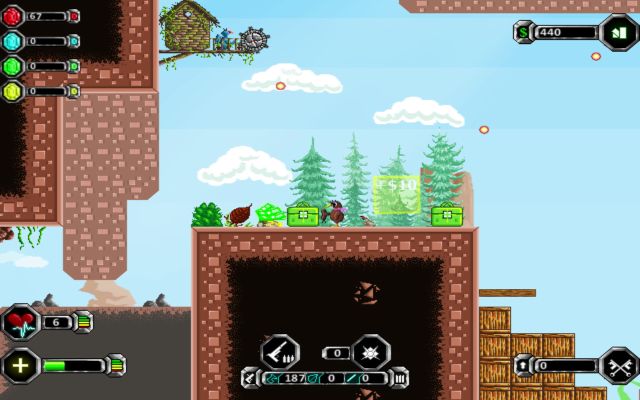 I imagine there's only one reason you would browse Keatz: The Lonely Bird on Steam. Odds are you're in the market for an inexpensive, simplistic title full of mindless violence. And what better game to satisfy that craving than an adorable run 'n gun platformer that looks like it was originally released for ZX Spectrum or Amiga? I mean, it checks all the right boxes: retro-style visuals, colorful environments, gun fights, explosions, gore, a despotic antagonist bent on genocide, obstacle courses and a silly storyline. Given your mellow expectations, this excursion should succeed with flying colors.

However, you might not realize how much baggage can come with even a rudimentary title, but you'll soon discover as much within the first few minutes. After your initial spawn, you leap down from your starting point and engage your first feathered foe. Both of you cut loose flurries of bullets, neither of you giving an inch. Though numerous shots pound through your chest, your health barely moves. You become so emboldened by your apparent demigod-like defenses that you rush toward your target, screaming in triumph until Mr. Pelican lightly brushes up against you. At that moment, your remaining hit points fall to zero and you explode into a crimson cloud with a loud CAAAAAAAW!

Yeah, you read that correctly. Bullets, lasers and even rockets don't faze Keatz much (though they do gradually chip away at his health), but direct contact with another bird automatically kills him. I know it's foolish to question side scroller logic, but an inconsistency like this is beyond ridiculous, especially when you consider how many levels throw loads of swift enemies your way. 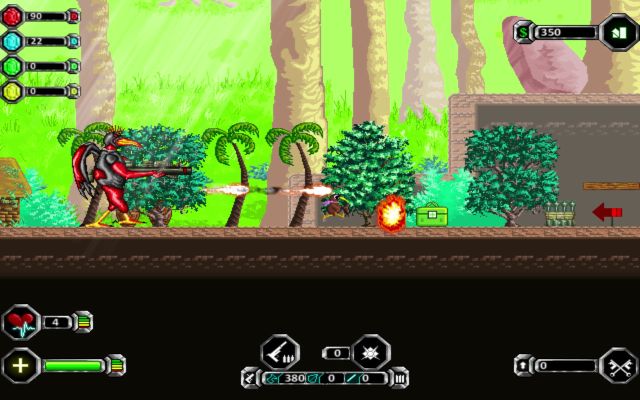 But that doesn't matter, because you can always outmaneuver them, right? So you try again, this time mashing all of your buttons to see which one allows you to jump. Instead, each one produces ineffective clicking sounds that only get you killed. As it turns out, you need to press the Up directional to leap through the air as if this were some lousy Color Dreams game, and no, you can't readjust the button/key bindings to your liking. You're stuck with the scheme the game gives you.

After several deaths, you work out an effective strategy: sit far away from your adversary and fire with reckless abandon until he expires. In fact, this tactic proves so effective that you use it throughout the campaign, multiple times per stage. Whenever you land on a platform or floor, you mindlessly empty your gun into whatever crowd lies off-screen, while you wait for the telltale sound of your ammo hitting a wall to signify that they're all dead. Meanwhile, you'll sustain a piddling-to-decent chunk of damage that you can remedy with one of the many medkits found in each level.

So yeah, there's plenty of simple violence on offer here, but you'll have to tolerate a lot of nonsense to be able to get to it. You might be able to ignore these issues early on, but you'll run afoul of more nefarious flaws as you advance... 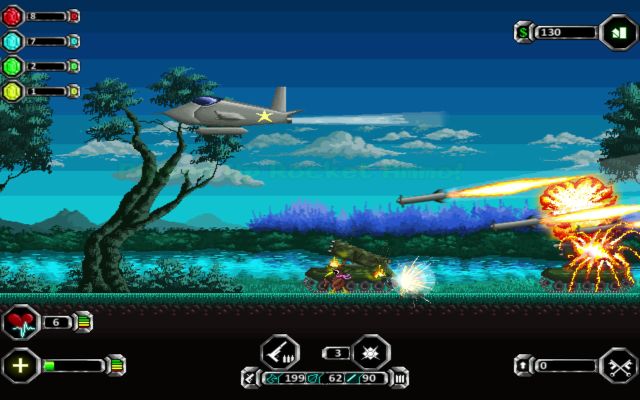 Namely, anything related to platforming. Admittedly, Keats provides some decently designed levels, in that they're not all straightforward romps to a finish line. Some of them offer alternate routes and explorable regions that reward you with extra lives or additional ammunition. Unfortunately, traps and obstacles litter these stages, each with their own nuances and annoyances. For instance, you'll bump into numerous beds of spikes, some of which lie just outside your view. One minute, you blissfully descend toward an unseen floor, the next you end up impaled on a jagged patch you couldn't possibly have known was there. It doesn't help that you sometimes need to take blind falls in order to progress through stages, either, so you never know when a long drop is going to reward you or murder you.

It gets worse, too. You'll zip past moving saw blades, only to get stuck in the ground and end up sliced to bits anyway. Or run past a bladed pendulum and get clipped by the tiniest pixel and perish. Or leap onto a springboard that rockets you into an off-screen star that automatically annihilates you. Meanwhile, your best efforts in regards to timing and jumping don't always pay off, thanks to Keatz's awkward handling. Not only does he move a bit too quickly, but he typically pulls off an inadequate arc when leaping through the air. More often than not, you need to hop straight upward and awkwardly angle yourself over obstructions to get past them.

Now take these issues, multiply them by ten and throw in a time limit. Presto! You now have dream sequence levels that'll give you night terrors for years to come. These stages pit you against an overlong gauntlet of surreal obstacles that require timing and Meat Boy-like reflexes, while utilizing not-Meat Boy-like play control. And yes, some traps sit off-screen, so proper timing is occasionally a matter of luck. You not only need to tread carefully here, but do so at a pace that run down the timer. Worse yet, these segments mostly have you ascending to a goal at the top, and one wrong move can send you plummeting back to a previously conquered sequence. 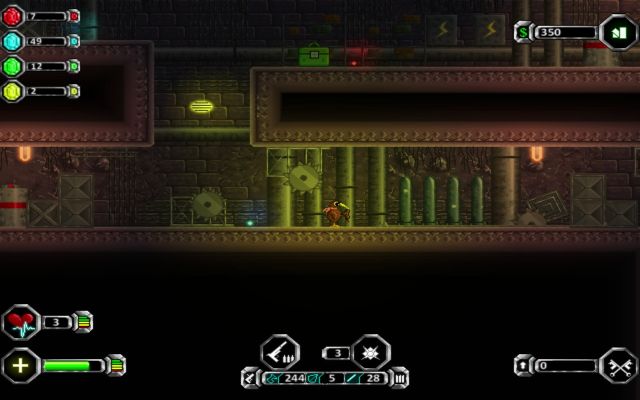 However, those stages don't even represent the very worst content this platformer has to offer. The sanity-shattering piece de resistance to this whole mess isn't something you eventually reach, but a function that's ever-present from the get-go. Unlike most modern 2D platformers, Keatz doesn't offer infinite lives. When your stock runs out, you get to sit through a drawn out 'game over' scene where the titular hero splatters against a bloody backdrop that looks like it was created with MS Paint. From there, you can reload your progress, but you'll find the game autosaved with only one life remaining.

If you run into a single foe, you'll have to watch that long 'game over' screen again. Any time you miss a jump, screw up your timing, accidentally fall onto a trap you couldn't see, or lose a shootout, YOU'RE FORCED TO WATCH THAT UNSKIPPABLE 'GAME OVER' SEGMENT AGAIN AND AGAIN, like the ice cold drips of water torture. And given the number of instant death devices present in each stage, you will croak often. Never mind any of the complaints I discussed above, because this is the one that eventually prompted me to quit playing entirely.

Ultimately, you have to ask if Keatz's content presents a worthwhile trade-off. Is suffering through an irritating life system with wonky play control worth basic gunplay? For my part, the answer is a whopping "no," because there are so many vastly superior products out there across numerous platforms that meet the aforementioned criteria without burying you in BS. Steam is a humongous marketplace these days, perhaps excessively so, and it shouldn't take you long to find a more functional game that provides all the running and gunning you could ever need. Like so many of the game's perils, keep this title out of sight.

If you enjoyed this Keatz: The Lonely Bird review, you're encouraged to discuss it with the author and with other members of the site's community. If you don't already have an HonestGamers account, you can sign up for one in a snap. Thank you for reading!

© 1998-2021 HonestGamers
None of the material contained within this site may be reproduced in any conceivable fashion without permission from the author(s) of said material. This site is not sponsored or endorsed by Nintendo, Sega, Sony, Microsoft, or any other such party. Keatz: The Lonely Bird is a registered trademark of its copyright holder. This site makes no claim to Keatz: The Lonely Bird, its characters, screenshots, artwork, music, or any intellectual property contained within. Opinions expressed on this site do not necessarily represent the opinion of site staff or sponsors. Staff and freelance reviews are typically written based on time spent with a retail review copy or review key for the game that is provided by its publisher.