And the prayer of faith shall save the sick, and the Lord shall raise him up; and if he have committed sins, they shall be forgiven him. (James 5:15)

Deus Ex had a hard journey in front of it. A product of the infamous Ion Storm, (the cursed company responsible for the multi-million flop, Daikatana) it was predicted to crash and burn long before it even saw the light of day. However, despite the naysayers, Deus Ex rightly made a name for itself, earning countless awards and winning fans all over the globe.

The game takes place in the near future, and, as is often the case in such scenarios, the future is far from a technological utopia. Large corporations run and control the lives of common people from the shadows, poverty grows larger by each passing day, and a deadly, incurable disease has recently started to take countless lives, mysteriously targeting the poorer members of society.

Hope for an answer comes in the form of protagonist J.C Denton, an agent for UNATCO. On the surface, this organisation seems to stand for upholding peace and integrity in a dark, gritty future, but beneath the PR-friendly veneer of corporate image, things aren't always what they seem. Only after a few initial missions, J.C will start to question the integrity of the people whose ideals he trustfully and obediently follows. 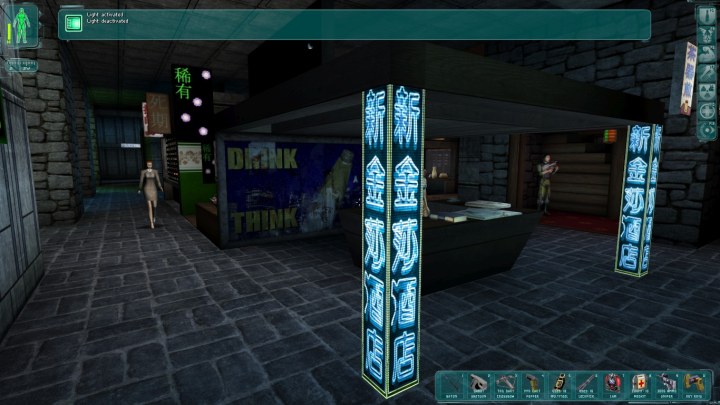 During J.C's journey around the globe -- including pre-existing and faithfully recreated locations like New York and Hong Kong -- he will find out that the light he believes in casts a long shadow, that the colleagues he learned to trust can twist into becoming his biggest threats, and those that he fought against can prove to be his only hope of survival. Those hes tasked to hunt down could end up being his only chance of finding out the secrets hidden behind the new world order.

The epic undertones that flow through the game are often highlighted with biblical references that are often presented in a subtle manner. Be it with the names of characters, or with books and logs that you can read during the course of your journey, this noticeable touch is pulled off with more substance and class then most games that follow this path usually manage.

Be strong and of a good courage, fear not, nor be afraid... for the Lord thy God, he it is that doth go with thee; he will not fail thee, nor forsake thee.
Bible, Deuteronomy

The moment Deus Ex starts, you are asked to create and customize your on-screen avatar. What you can't alter though is that which puts JC beyond the usual civilians; he is an augmented agent with millions of nanites coursing through his body, making him faster, stronger, and smarter than his normal human counterparts. But how these affect you is entirely your call. 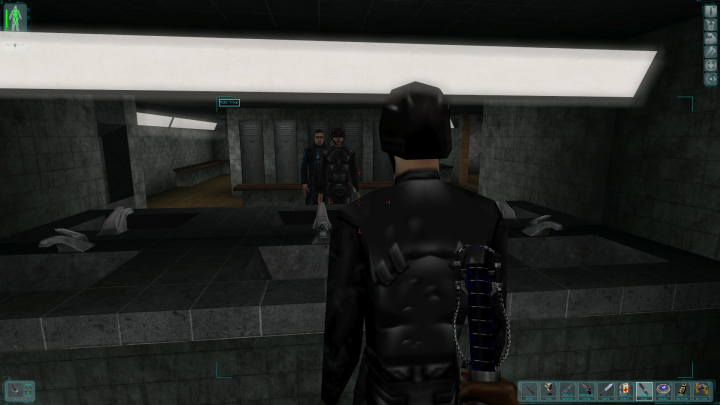 Perhaps you want to be a shifty thief, hiding in the shadows, choosing never to get your hands dirty in close combat? You can do that here. Just train yourself in skills such as lock-picking, security systems bypassing, and equip yourself with a silent, deadly crossbow that sends whispering bolts into unsuspecting flesh, or a silenced rifle for the ultimate in hushed-up artillery. Fighting is for primitives, anyway.

Or perhaps, you like to get in the heat of things, like to laugh chaotically as you snap frail little necks, preferring to revel in a shower of hot blood, organs splattering around you. Psychopaths have all the fun, so why not follow their bloody path? Doing so is not a problem! Just take traits such as unarmed combat or heavy weaponry and watch as your enemies die via a well placed jab from your well trained fists or explode messily from your convenient mini gun. Perhaps you won't be able to pick locks or hack computers, but there are other ways to enter buildings. And all the fun routes involve explosives and grieving widows.

These are just some of the countless paths open for your character to take. You can be the champion of the common people, defender of justice and all that is righteous! You can be the one who rescues kittens stuck in trees, the one who douses burning orphanages, the one who feeds and pities the poor and homeless. Of course, you can be a complete bastard as well. You could help a slutty prostitute get rid of her rough-talking pimp with violence, only to then blackmail the skank, or use her as a herpes-ridden punch-bag. You could kill the old and the helpless for kicks, or sell out those that sought you out for help and placed their lives in your hands.

The choice of how you will play your character is yours, just remember that every action has its consequences. Wrong turns will come back to haunt you, and it's this level of freedom that perhaps personifies Deus Ex best. Freedom that is only helped by the game's first person view, allowing you to see through the eyes of J.C, fully integrating you with your surroundings. Running off the sublime Unreal engine ensures a smooth process while believable graphics and atmospheric music cement a visual treat. If complaints are to be made, they are to be levelled at the fluctuating degree of voice acting that can assault you at times. For instance, in the Hong Kong area of the game, the chatterings of the Chinese are quite possibly the worst atrocity of a voice-over since the cringe-worthy release of the first Resident Evil game. 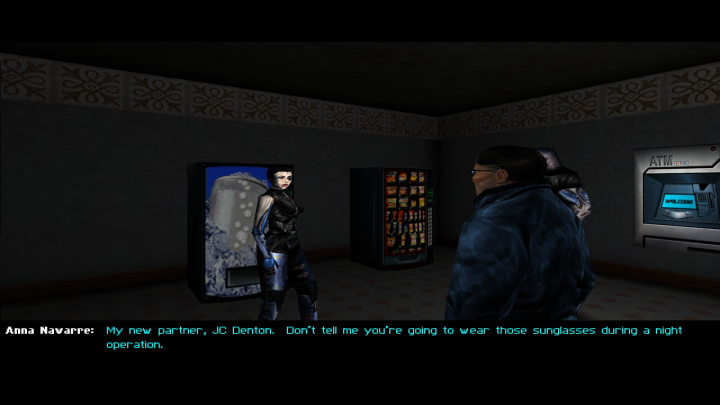 There are other problems which plague Deus Ex, most notably that the many paths that you can follow all lead to the same destination. It's true that you can complete objectives in various ways; hacker characters can override robot sensors and make them shoot everything on sight, leaving you safe and unharmed, whilst soldiers can waltz through enemy ranks, guns blazing and destroying everything with their own firepower. If that's not enough, you could take the thief's route and ultimately avoid combat all together, using the various secret passages to sneak through dangerous territory undetected. But it matters not what you do in the long run, because the plot never changes.

It doesn't matter if you decide to spare a leader of an organisation that you were ordered to kill. It doesn't matter if you obey or disobey orders, if you follow the rules to the letter or break every last one. You will get a few different dialogue options, but overall the games scripted continuity will not change at all. The destination that J.C always alludes to, and the organisations he aligns himself with, are always the same. There's no defining decisions to be made until the very end when you can choose from the three different endings.

But none of this stops Deus Ex from being a memorable experience, and every person who considers themselves a fan of conspiracy theories, and of the entire cyberpunk/futuristic setting would be a fool not to carve their way through the tainted, but gripping, world of tomorrow.

If you enjoyed this Deus Ex review, you're encouraged to discuss it with the author and with other members of the site's community. If you don't already have an HonestGamers account, you can sign up for one in a snap. Thank you for reading!

© 1998-2022 HonestGamers
None of the material contained within this site may be reproduced in any conceivable fashion without permission from the author(s) of said material. This site is not sponsored or endorsed by Nintendo, Sega, Sony, Microsoft, or any other such party. Deus Ex is a registered trademark of its copyright holder. This site makes no claim to Deus Ex, its characters, screenshots, artwork, music, or any intellectual property contained within. Opinions expressed on this site do not necessarily represent the opinion of site staff or sponsors. Staff and freelance reviews are typically written based on time spent with a retail review copy or review key for the game that is provided by its publisher.